I know what to expect from an Orff workshop. Typically, they start with the presenter inviting everyone into a circle, then teaching a greeting/mixer musical game by lining out a song and the movements that go with it. Once the song is learned, variations are developed, leading organically into deeper learning of the concept. If it’s a 1-2 hour workshop, that one concept is likely to be the entire event.  If it’s an all-day workshop, the learning will be broken into units, each exploring a concept that ties into the central theme. And if it’s a 1-2 week course, each day will have a theme, again tied into the overarching conceptual framework. The learning will involve singing, dancing, playing games, drumming, barred instruments, and recorders. There’s little, if any, lecture, and rather than have participants take notes, presenters prepare an exhaustive set themselves describing every game and including scores for the songs to hand out afterward, the better to keep everyone’s hands free to play and participate. I first encountered this process in 2005, and it revolutionized the way I teach to every age level. The learning is so much deeper than taking notes from a lecture could ever be, however stimulating the presentation.

I knew what to expect—until yesterday.

In fact, the introductory session was thoroughly “Orffy,” with each of the four instructors teaching a song/game as described above that had us on our feet, singing, dancing, switching partners frequently, moving around the room, and learning different styles and languages. At the conclusion of each game, the instructor talked briefly about what being in Ghana means to him or her. After all these presentations, the head of the course, Kofi Gbolonyo, gave us an overview of what we’ll be doing and a brief lecture about Africa—something I’ll write more about separately, as it upended everything I’ve ever thought about this continent. After all this, we dressed up for the afternoon’s events. And this is where it departed from what one expects from an Orff workshop. 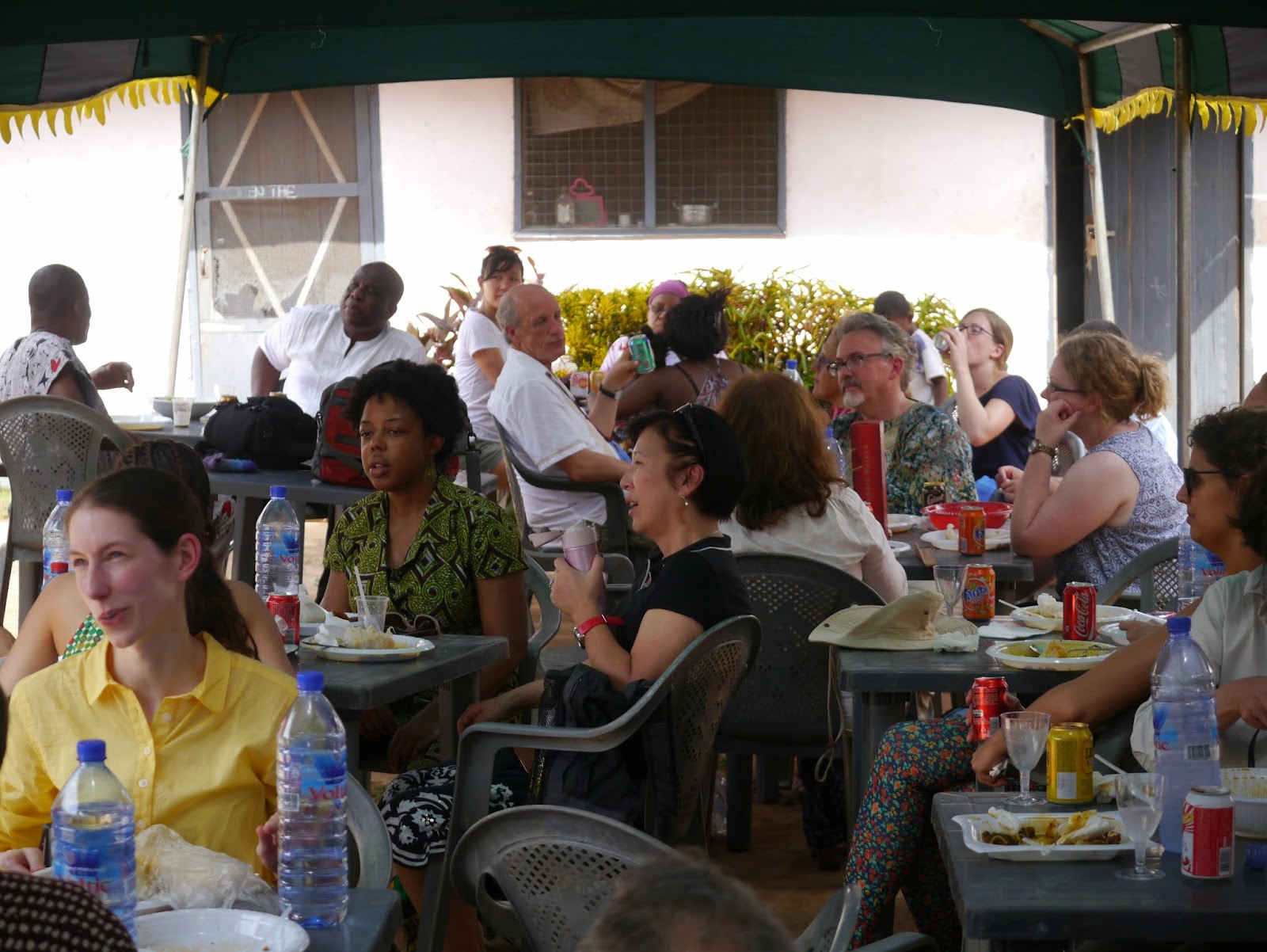 We climbed on the bus and were taken into Dzodze, to the compound where Kofi’s mother is the matriarch, and served a banquet of Ghanaian dishes. These were not especially exotic, but the hospitality of our hosts was marvelous. Then the bus took us to the center of town where a music festival was in progress. I’ll let the pictures do the talking: 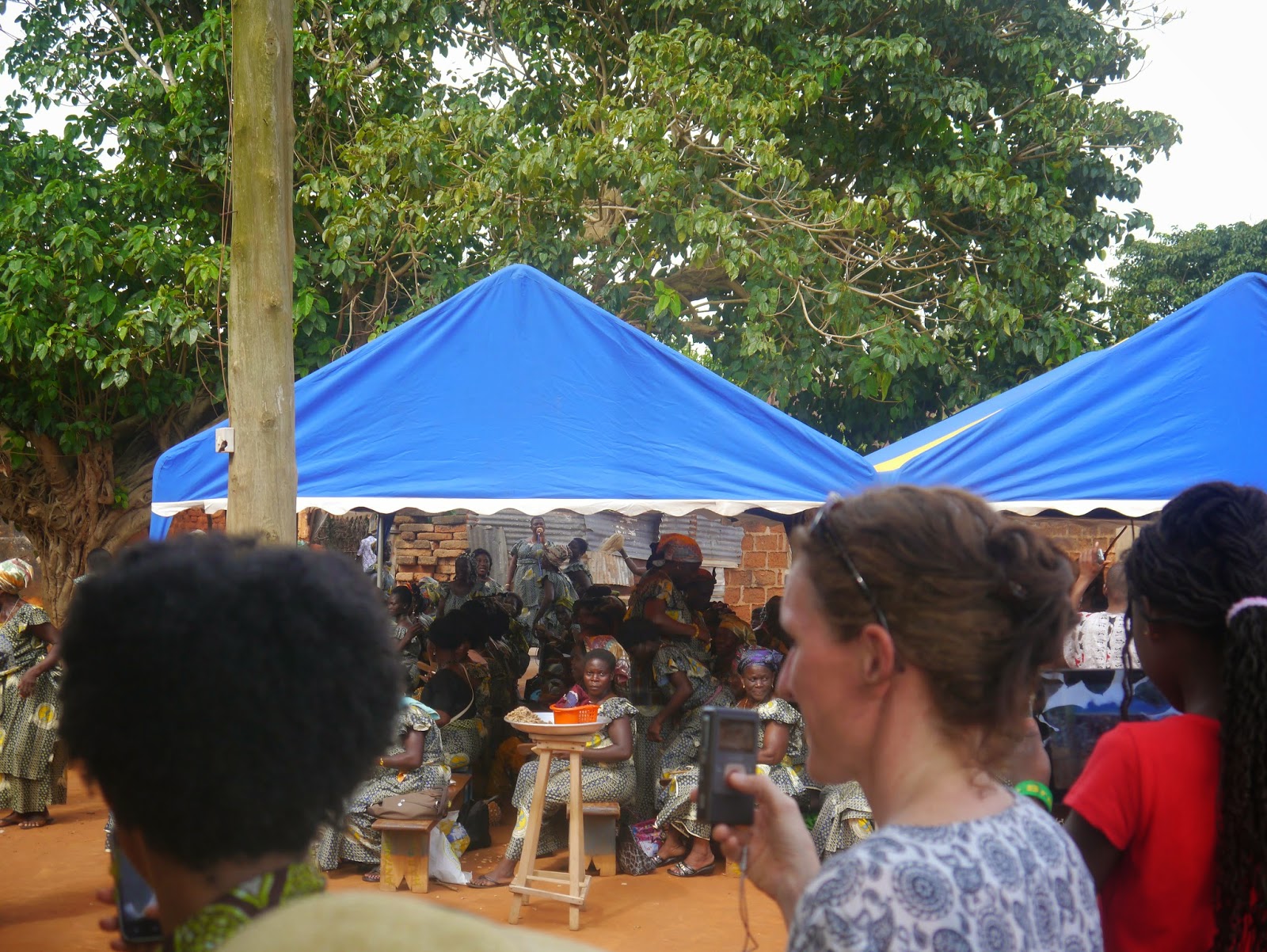 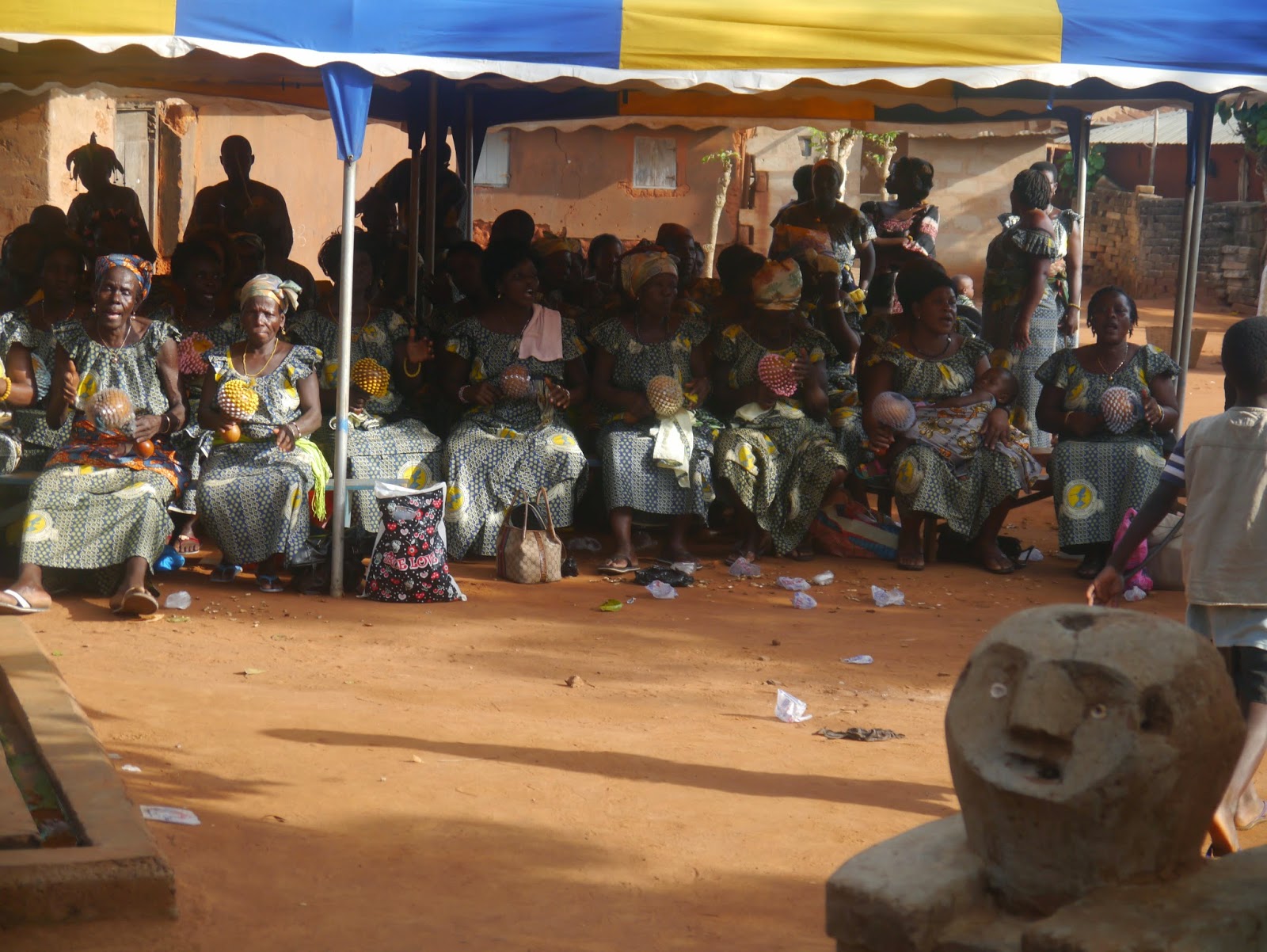 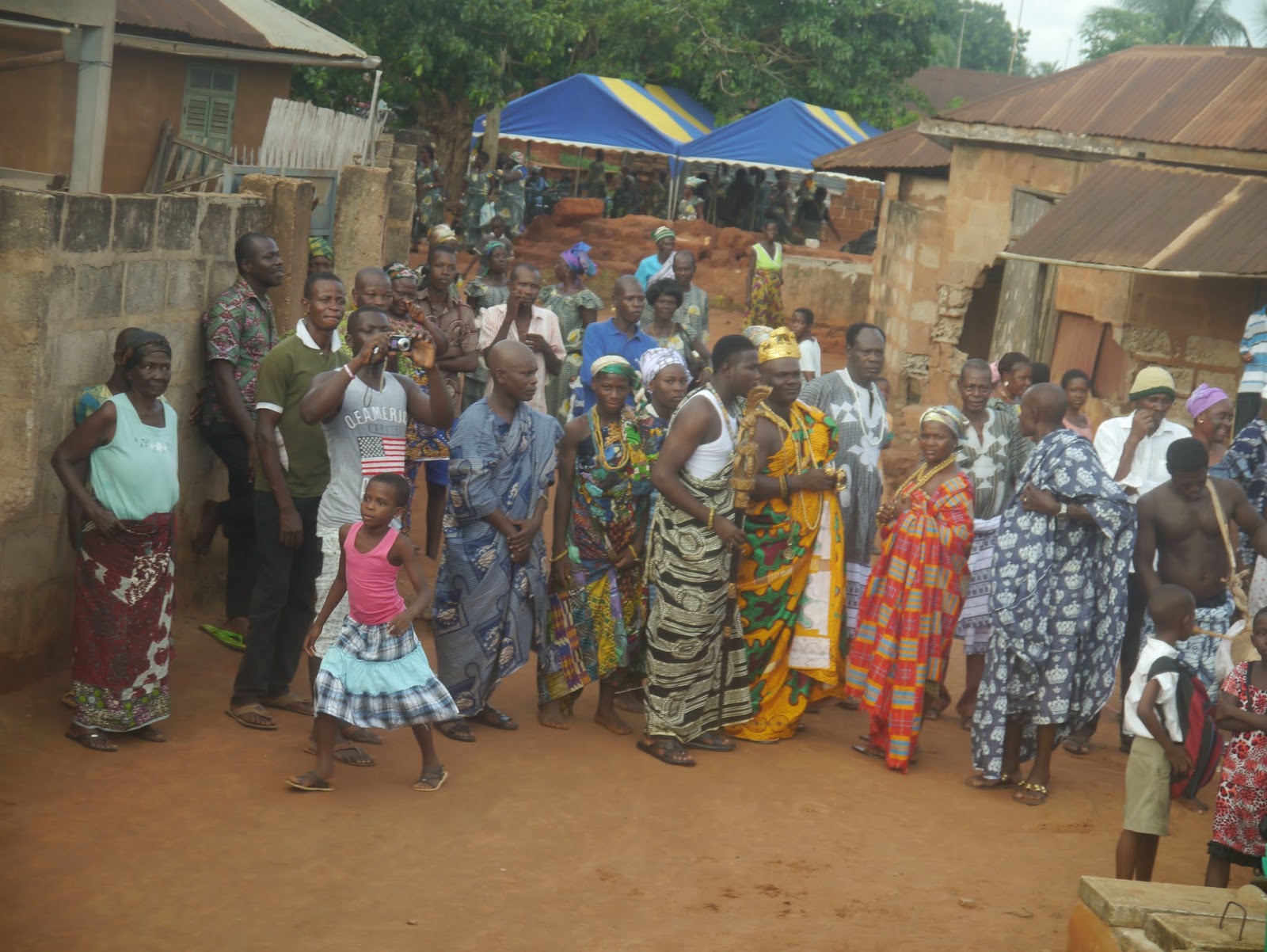 We were drawn in from the moment we arrived, children running up to us and encouraging us to dance with them. In fact, as Kofi had explained earlier, we were expected to dance. We stayed here for about an hour, until Kofi told us it was time to be presented to the chief of his neighborhood.

As the music festival continued, we were led to a covered area about a block away where a gathering of elders was waiting for us. As I learned from my guidebook, being presented to the chief is an essential part of visiting a Ghanaian village, and Kofi had arranged to present all 38 of us to him. There was an elaborate protocol involving drumming, speeches, and the pouring out of libations to honor the ancestors, all of it translated from Ewe by Kofi or his brother Prosper. The history of Dzodze was told tooo us, in English, by an elder. Finally came a moment Kofi had not expected: the chief had decided to elevate both Kofi and one of our San Francisco instructors, Sofia Lopez-Ibor, as honorary king and queen of music education in Dzodze. 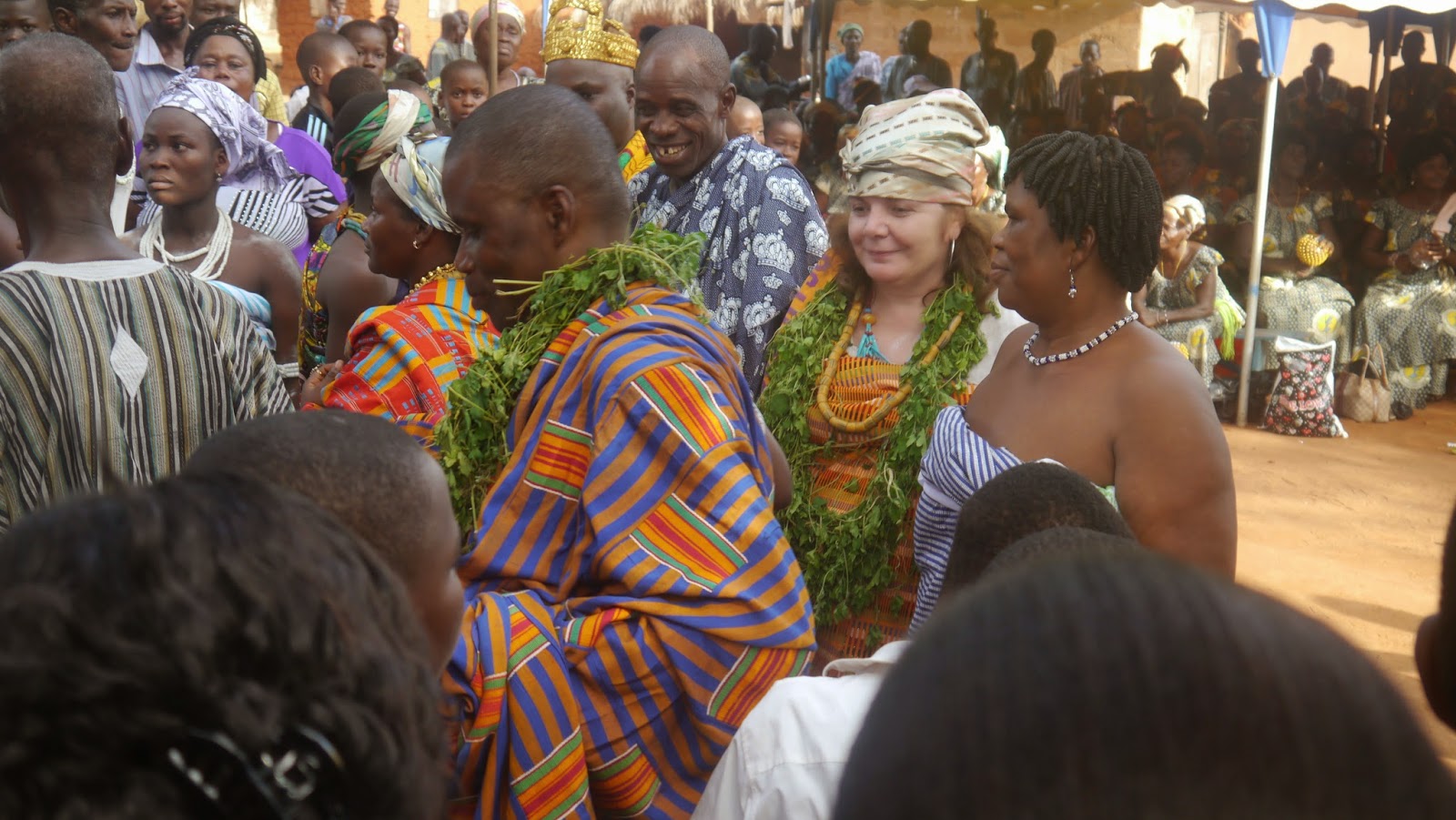 He instructed Kofi to remember where he came from, even as he travels around the world, and told Sofia she is welcome here whenever she may come, and to consider Dzodze her home. Both of them were presented with regalia and given seats on the dais. Through this entire ceremony, a cannon was fired at every significant moment. Finally we were led back to the festival square to dance some more, then to the bus.
After a quick trip back to the hotel to use the facilities, we took one more trip into town to see the marketplace, then through town to a site in the country where Kofi has purchased a piece of property to be the home of the Nunya Music School, founded by Kofi and currently meeting in the homes of some of the instructors. Back to the hotel again for dinner, and then, when all of us were sagging and ready for bed, came the experience that transcended an already rich day.

The Nunya School teaches traditional Ghanaian music and dance to children between the ages of 10 and 19. Last night, sixty of them came to the hotel to drum, sing, and dance for us. For ninety minutes, the children amazed us with their performances. After the full day we’d had, many of us were struggling to stay awake, but we didn’t want to miss a minute of it.

The performance finally ended and now it was time to interact with the children. At first we were just greeting them, but then they began teaching us dance moves, laughing with delight at our clumsy efforts to imitate their fluid movements, shaking our hands, posing with us for pictures. By itself, this would have been plenty, but now it began to rain.

I’ve experienced downpours like this before, mostly in Texas and Illinois (despite Oregon’s reputation as a rainy place, drenching downpours are rare). The rain would not let up, and quickly flooded the courtyard where the performance had taken place. Driving rain like thus was far too intense to permit the children to be driven home, but they didn’t mind: they played in the flooded courtyard, chasing soccer balls, splashing about, delighting in the cleansing of the heavy air. That wasn’t all, though: they joined us in the covered areas, continuing to teach us not just to dance, but to play intricate rhythms on the drums, shekeres, and bells. Some of them taught playground games, always of interest to Orff teachers. The impromptu jam session lasted until well after 11, and as tired as I’d been during the performance, I was incapable of going to sleep once I finally got to bed. I finished my blog from the first day of the trip, and still couldn’t sleep for hours, with the rhythms and songs of Ghana still ringing in my ears.
Dzodze Ghana Orff Orff-Afrique