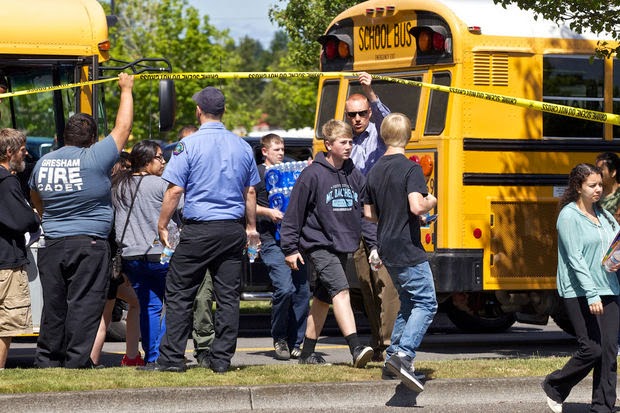 Reynolds High School is 3.6 miles away from Hartley Elementary School, where tomorrow I finish my teaching year. This morning, a person with a gun opened fire in a locker room at RHS. A teacher was wounded, a student died and, later, the shooter was killed. There may have been two other shooters. There's not much news available yet, and the district is being particularly secretive about what happened.

I've written a lot in this blog about guns and shootings. I'm always upset by shootings, especially when they happen at schools, but who isn't? Imagining hundreds of children cowering in fear, being led out of the school with their hands on their heads by police checking for more firearms, and the subsequent mob scene as parents try to reunite with them, injects so much trauma into the formative experience of school that I can't help but be moved. To have it happen in my district, at the school attended by every teenaged big brother or sister of the thousand students I've taught this year, makes an incident that would upset me wherever it happened personal.

As I write the beginning of this post, I can hear delighted screams from outside where children are enjoying a "Rockin' Recess," their reward for improved attendance in the month of May. As far as I can tell, none of them knows about the shooting yet. I hate to think what conversations they'll be having tonight; and the thought that one of them could be going home to learn that a big brother will not be, ever again, is almost too much to bear. I'll have to stuff that in a box for the next two hours as I go into the gym for my final lessons with two kindergarten classes and one second grade class.

I'm back from teaching, with twenty minutes until buses leave. I'll see if I can gather my thoughts adequately to turn this into something I can post.

My first thought is about the violent impulse that runs so deeply in American culture. When gun defenders (such an oxymoron) insist that the one thing that stops a "bad guy with a gun" is a "good guy with a gun," they remind me that our answer to so many problems is shoot first, ask questions later. That's how we got into Iraq and Afghanistan. It's how, if the hawks in Congress get their way, we'll get into Iran. It's how we wind up with so many young people coming home missing parts, if they're lucky enough to come home at all.

I see this in my students, but they are, after all, children: the impulse to lash out at whatever or whoever has caused you pain, grief, suffering, or even just annoyance. I see it in the road ragers who blast around me at rush hour, endangering everyone around us to gain a car length or two. I see it in our approach to corrections, as we channel so many minor offenders into prison cells where they are punished for inordinately lengthy sentences. Of course we want to fight back. It's hard-wired into us: the only way to keep the carnivore from coming back the next day is to put an arrow in its heart. But we don't have to stay that way. When a second grader hits back, it's a sign of immaturity. When a teenager carries a gun into a school to silence a bully, there's still some immaturity at work there, but there's also a culture that says gun violence is somehow not so bad, not something that has to be worried about, certainly not something that has to be legislated, just so long as there are more guns around to put the killer down before he can kill anyone else.

Yesterday as I was on hall duty, I overheard a second grade boy talking to a classmate as they carried their breakfasts to their classroom. "My daddy gets out of prison today!" he said, his voice happier than I've ever heard it, a huge smile on his normally angry face. I don't know why this boy's father has been in prison, whether it was drug-related, gang-related, perhaps a robbery, maybe some act of violence. I do know these children have got enough to worry about without having to imagine someone might bring a gun into the building. And yet when we have a lockdown drill, we have to, as gently as we can, explain to the children why it's important for them to stay in that corner with the lights off and their voices silenced, explain that there could be someone with a gun walking around outside the building or, worse yet, roaming the halls. It's a horrible, scary world we live in, a world alien to my experience (though, in all fairness, I got a terrifying dose of "Your Chance to Live" civil defense lessons when I was in junior high, so I could worry about nuclear attack).

There have now been 74 school shootings since Sandy Hook, the one that was supposed to finally get us taking gun violence seriously. 74 schools terrorized by people holding guns, and still the loudest voices are those insisting the answer is more guns, more death, more bullet holes in school walls and whiteboards and desks and students. It's as if our response to a wildfire was hosing it with gasoline.

The reaction of the gun lovers to an event like this is terrifyingly fast. I had a text from Amy this morning about the event, and went online between classes at 10 to check the details. The local news sites I looked at had already been besieged by dozens of pro-gun comments, leaping to the defense of the deadly weapons that had just taken the lives of two young people and wounded a teacher. One of them wrote that the solution was arming teachers and administrators, putting armed guards in schools, turning learning communities into prison camps.

My reaction was also instantaneous: keep your damned guns away from me and my students. The day someone brings a gun into this building with a government sanction is the day I leave public education.

Thankfully, I don't believe it will come to that. But I don't know what else it can come to, as long as these murder machines continue to pour into our country, and politicians affirm again and again that they are on the side of the shooters.
gun control gun violence Reynolds High School shooting Sandy Hook school shooting
Location: Reynolds School District, 1204 Northeast 201st Avenue, Fairview, OR 97024, USA