Showing posts from January, 2020
Show all

We All Know How This Ends

Lance Corporal Schofield's message could save a thousand lives--but only if he can deliver it. "All my stories are true--and some of them actually happened." --Nikki Johnson "I've been to the movies, I've seen how it ends." --Brandi Carlile When the credits finally began to roll at the end of 1917 , I felt like I'd been in the theater for far more than the 117 minutes of the movie I'd just seen. I mean that in the best way. 1917  is a thriller that never lets up. Its quietest moments were nail-biting scenes of soldiers picking their way through No Man's Land, scouting abandoned barracks, and exploring a recently-vacated farm, during which there was always a sense of death lying just over the next hill, around the next corner, just one step deeper into the unknown. The concept is a well-used one: to avert a disastrous advance into a deadly trap, two young soldiers must hand-deliver a letter across miles of craters and barbed wire, d
Post a Comment
Location: Portland, OR 97229, USA
Read more 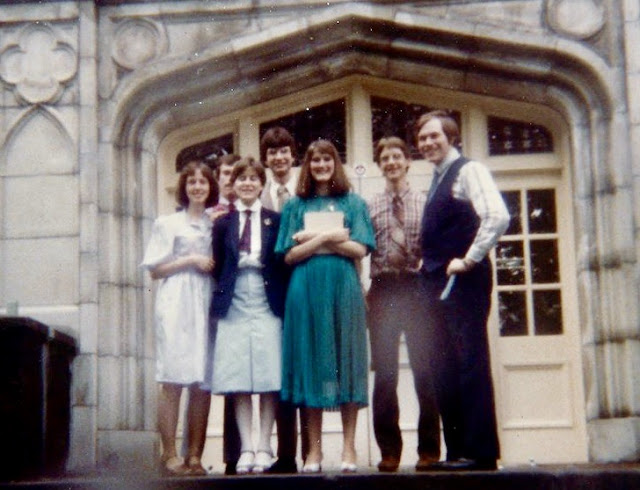 From left to right: Elizabeth, Rick, Annette, Scott G., Kathleen, Scott M., me; May 12, 1983, Lausanne Hall, Willamette University, Salem, Oregon I got the news November 18: Scott had died in July. The news gutted me. I found the obituary online, and the shock grew. There was no mention of the cause of death, which led me to believe it was health-related: heart disease, cancer, some other illness. What was most jarring to me was to learn what a full, rich life Scott had led--not that I'd expected any less of him, but that I was learning about it for the first time. I need to be clear here which Scott I'm talking about, as there were two. Scott Greenwood is still alive and well, and I have managed to speak with him a couple of times in this century. It's Scott Marchand who is gone. The two Scotts, plus Rick, and I all met on the first day of freshman orientation, August, 1979. There was another guy who was briefly in our group--I think his name was Chris--bu
Post a Comment
Location: Portland, OR 97229, USA
Read more

- January 03, 2020
It's been awhile. My last post to this blog was in August. I was in professional limbo then, still interviewing for jobs, thinking I'd landed a couple of them, then learning that some other factor had altered my chances. Finally I found a principal willing to take a chance on me, but by now, I was counting on anything. I did get that job, very late in the summer, and I'm in it now. It's a challenging position, pushing me into areas I've never explored before. It's also forcing me to be more intentional than I've ever previously been about classroom management, and I think it's working. With as many disappointments as I've had over the years, I'm no longer willing to make predictions. My hope is that this will be the last job of my life, but check back with me in three years to see if I can finally call myself a contract, rather than probationary, teacher, counting down my last four years until retirement. Keeping abreast of this work has devo
Post a Comment
Location: Portland, OR 97229, USA
Read more
More posts