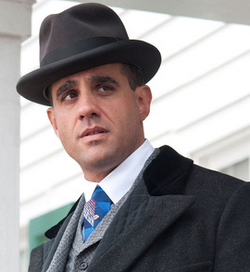 That's Gyp Rosetti, a very scary gangster in HBO's Boardwalk Empire. He spoke that line during a tense standoff, one of the few times in the series when everybody having guns didn't end in a shootout. In Boardwalk Empire, guns exist to be used on others. It happens a lot. The third season climaxed with a citywide gun battle, bodies piling up all over Atlantic City.

Everybody having guns is a symptom of everybody being scared. For the last twelve years, Americans have been afraid. Someone sent me this graphic in 2002: 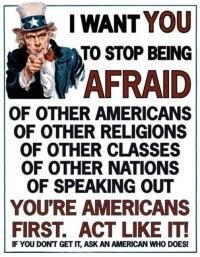 With planes hijacked and crashed into buildings, anthrax in the mail, terrorist organizations plotting further attacks, perhaps we had cause to be afraid. In such a climate, it should be no surprise that Americans are buying guns, that people who previously would never think of owning a killing device would want one in the nightstand. But there are some real problems with that kneejerk reaction. First, none of the people we were afraid of in 2001 was in any position to invade our homes; in fact, the only home invasions that followed that terrible day were perpretated by heavily armed Americans, seeking terrorists in third world countries, as well as large numbers of civilians who were never going to rise up against anyone.
The wars started in the wake of 9-11 are finally tapering off, at a cost of hundreds of thousands of mostly innocent Iraqi and Afghani lives, as well as more than 6000 young American servicepeople. And yet still we are afraid. Tea Partiers and the Republicans who speak in their behalf are afraid of change, and take it to paradoxical extremes (Get the government's hands off my Medicair!). Most recently, Americans seem to be afraid of having their guns taken away, and are reacting by buying more of them.
And yet even as the number of guns owned by Americans increases, the number of Americans owning guns is going down. This means some Americans have enormous arsenals. The primary argument for owning so many weapons is defense; and yet, what are they thinking they can defend themselves from?
The American police state? Hardly. Anyone who's seen footage of the Boston Police capturing the marathon bombers knows it would take an army to fight off our increasingly militarized "peace officers." Invasion by another country? Don't be ridiculous; the United States armed forces outnumber and outweapon the next ten military countries combined. Nobody's invading America anytime soon. Home invasion? Sneak downstairs with your urban assault weapon to take out whoever just made a bump in the night, and you will most likely either kill your brother-in-law having a midnight snack or be killed yourself by the jumpy and equally-well-armed burglar who broke into your house.
Most of those law-abiding guns stay in their cabinets gathering dust. Those that do get used on humans will most likely be used in anger, by accident, or to commit suicide (far more effective than taking a bottle of pills). And then there are the children who, steeped in a culture of cool violence, end a play date by firing a gun found at a friend's house, and killing that friend.
Then there are the libertarians who publish sentiments like this one:

There are a lot of problems with this line of "reason," primary among them this: HAVING A GAY IN YOUR HOUSE DOES NOT ENDANGER MY CHILD. It's not just that I dislike guns; they terrify me. I want sensible gun laws based on safety, not the personal preferences of hobbyists. That child holding the assault weapon could kill an entire classroom in a matter of minutes.
So that's why I don't want a gun in my house, why I want you to register your gun, why I don't want every kid on the block to have a concealed weapon, why I just want everyone to for God's sake step back, take a deep breath, and think about how many weapons we really need in this country. Please.﻿
Boardwalk Empire gun control guns Gyp Rosetti libertarians safety