Showing posts from July, 2013
Show all

The Kindness of Strangers

Not all neighbors are friends. And not all strangers are enemies. It was October, 1986. I was 25 years old, in my second year of seminary in Dallas, Texas. My fiancée, Brenda, had introduced her brother to a friend she had met in Dallas, and after a brief courtship, they were going to be married in Sandy Creek, New York, 1900 miles away. The bridesmaids' dresses, made by another Dallas friend, were in the back of my car. Our plan was to drive straight through, something I had done solo five months earlier, when I drove up to meet my future in-laws for the first time. We left early in the morning, and it was a smooth ride all the way to Tennessee. We filled up the tank in Memphis, where a sign on the pump notified us that in the winter months the gasoline contained a high percentage of ethanol. I thought nothing of it until, sometime around 10 p.m., climbing up into the Great Smokies, the car began to shake as the engine lost power. I pulled onto the shoulder, put it in a low
Post a Comment
Location: Frackville, PA 17931, USA
Read more

"It's mine anyway. Why can't you give it to me now?" Simeon gazed out the window at the hayfield. It was high summer, and the hay had just been mown, lying in messy but straight rows all the way to the fence and the woods beyond. From a distance Simeon heard Abel's voice shouting out instructions to one of the field hands. Abel must be wearing a fine sheen of perspiration, bits of hay clinging to him, his shoulders bronzed by weeks spent in the fields, laboring side by side with all the hired men, refusing to assign them any task he would not share. Seeing the patterns in the hay, hearing his older son's voice, Simeon clutched the windowsill. He must not see me cry, he told himself, and somehow managed to postpone the sorrow brewing behind his eyes. "What's the hurry? You just turned eighteen. You've got your whole life to enjoy your part of the estate. Stay with us a little longer, help your brother bring in the harvest. Then if you still w
Post a Comment
Location: Portland, OR 97229, USA
Read more

This is how big they were when I had to start living without them.   My nest began emptying prematurely when my children were 5 and 2. It was January, 1995, and I was moving into my first post-marital bachelor house. Prior to this development, the longest I had been away from my children was a one-week trip to a wedding and conference in 1993. Apart from that (and some occasional overnight retreats), I was home every night to give them baths, read them stories, and kiss them goodnight. Now I was without them for seven or more days at a time, and I was not taking it well.   To be fair, there was a lot about the situation that I was not taking well, and there were times when I was glad the children weren't around to see what I was going through. I experienced intense physical symptoms of withdrawal for at least the first two months of the divorce, and even four months into it, I was still having occasional attacks of sobbing that could last for twenty minutes.   Th
Post a Comment
Location: Portland, OR 97229, USA
Read more

Parable of the Lost Wallet 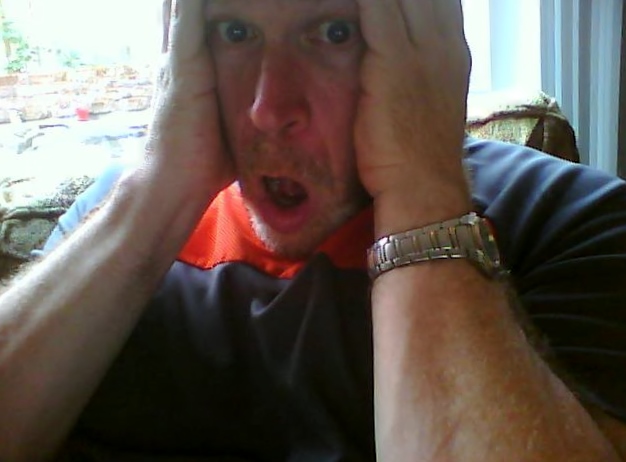 I lost my wallet today. I put it down to middle aged amnesia. For those of you not yet in your middle years, this is a condition that begins to take root in your late 30s, after which it's a long slide to drooling. It starts with misplacing your keys, but being able to retrace your steps, because they're still in a logical spot; progresses through putting said keys in the freezer, thinking "I won't forget they're there!" (and promptly forgetting); and continues through the stage I visited today: setting my wallet down on the trunk lid of my car while I affixed Amy's bicycle (which I had just taken to Sunset Cycles for a chain replacement) to the bike rack, then forgetting I had put it there and driving off with the wallet still on the lid. It fell off a couple of blocks later, as I turned a corner, but I didn't know it at the time. In fact, I didn't know it until I had gotten home, put the bike away in the garage, congratulated myself for remem
Post a Comment
Location: Portland, OR 97229, USA
Read more

Three Weddings and a Funeral

The weddings: Alex Falcone/Megan Niermeyer, Rosena Busse/Erik Grove, Melissa Anderson/Michael Dudleston. The funeral (early next month, and not pictured): Marge Jenkins. In general, I'm not a wedding fan. There are multiple reasons: 1) As a survivor of two divorces and one broken engagement, I'm just emerging from a period of marriage-shyness that has had me questioning the institution even for couples who've successfully practiced it for decades. 2) As a former pastor, I performed far too many weddings that left me with a gut feeling of ambivalence, knowing both that I had inadequately prepared the couple to fulfill their vows and that, even if I had, they were in far too much denial about what marriage means to have really learned anything from my efforts. 3) Also in the former pastor category comes the high stakes impressed upon couples by the wedding industry, all the expensive things that must happen for it to be a successful event. Wedding planners a
Post a Comment
Location: Portland, OR, USA
Read more

I Was a Teenaged Teetotaler 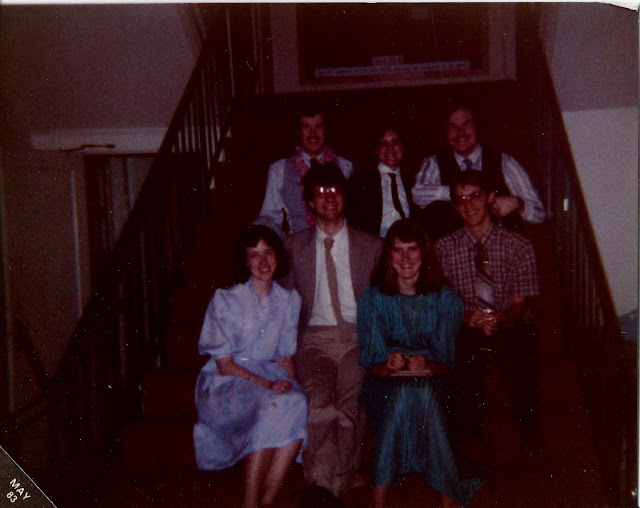 May 12, 1983. I am 22 years old. In the next 24 hours, I will experience three rites of passage: my first taste of alcohol, college graduation, and saying goodbye to the best friends I have ever had. As passages go, this one's a tripleheader.   I've written elsewhere about the "Element Gang," one of the nicknames for the Group (which is how I always referred to it). This entire essay is going to be about how I evolved from that to this:    I took this selfie last Saturday, July 20, as I introduced my son Sean (who turned 21 in May) to the joy of beer. Joyful to me, that is; utterly unappealing to him. Two different beer festivals, and we couldn't find a single one he liked, though he did appreciate some cider. Now back to me. I was raised by teetotal Baptists. Don't let the Methodist trappings fool you: both my parents were born and raised American Baptist, and while my father did spend most of his career as a Methodist minister, he never gave up
Post a Comment
Location: Oregon Brewers Festival, Portland, OR, USA
Read more

Flashback to January, 2009, the day the decision landed. I was two months away from my 48th birthday, and I was as old as I had ever been--or ever would be again. It came as an email from the court-appointed custody study expert. I'm not going to share any of the details, or how I felt about them, except for this: that day was the bottom for me. I was beaten, exhausted, alone. I was a tired old man. There have been times in my life when a defeat like this--or, as sometimes happened, a cascade of defeats--left me reeling for months, sinking into a state of misery from which I could not extricate myself. Both divorces were like that, especially the second, which triggered the end of my career in ministry. The night after I received the decision, I was wracked with insomnia. I think I finally got to sleep sometime between 5 and 6 in the morning, then had to be up at 7 to get to school. Teaching was therapeutic--I was still in my elementary job in Banks, and the kids were wonde
1 comment
Location: Portland, OR, USA
Read more

Worse than Hitler! (or, The Banality of Evil)

- July 24, 2013
In the late winter of 1990-91, I watched my country go mad. It really began in December 1989, with the invasion of Panama. I watched it unfold on British TV: the almost literal saber-rattling of Noriega (I believe it was actually a machete he waved in that press conference), followed by the lightning strike of American forces. The message was clear: don't mess with American interests. Apparently Iraq wasn't listening, as just eight months later Iraqi troops invaded Kuwait, once again putting the American economy at risk. Of course there would be another strike, but this time it would have to be an international coalition. Unilaterally deposing Noriega could be explained as the U.S. acting in the world's behalf, policing its own backyard to protect global commerce. Going into a Middle Eastern country to liberate oil wells would be a much tougher act of aggression to spin. President George H.W. Bush went to work on American allies, building a case against Saddam Hussein,
Post a Comment
Location: Portland, OR, USA
Read more

Our Olympic Adventure, Part VI: Almost No Trace Left Behind 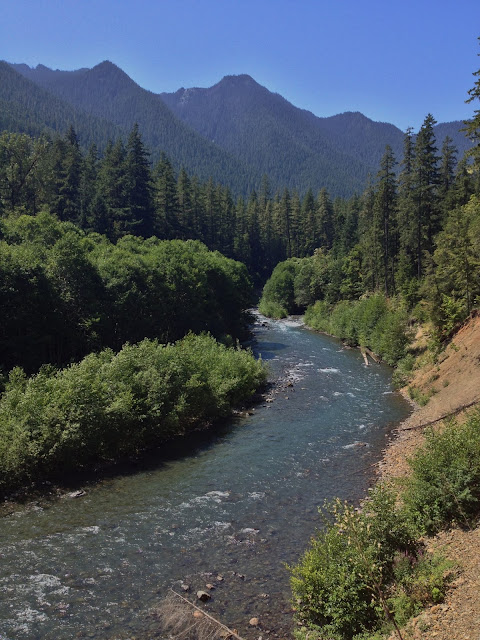 If I wanted to be cynical, I'd say it was the washout that made the difference. I've been camping all my life. Summer vacations for my family always meant finding a campground and locating there for a week or two. As a Scout, the frequency went up to monthly campouts whenever weather permitted. In Oregon, weather permitting meant anything but snow--and as rare as snow is in the Willamette Valley, we camped a lot. At the end of every Scout campout, we rolled up our sleeping bags and tents, loaded them in whatever vehicles we'd come in, then policed the area. This meant criss-crossing our campsite, search-and-rescue style, eyes to the ground, picking up every bit of litter we saw, whether or not it came from one of us. This could be a nasty activity, especially in early 1970s Idaho, where the national forest campgrounds we favored were often carpeted with cigarette butts. I'd gather handfuls of the loathsome things, as well as pull tabs from beer cans and occasional
Post a Comment
Location: Dosewallips River, Olympic National Park, Washington, USA
Read more

Our Olympic Adventure, Part V: End of a Streak

Lo, how the mighty has fallen. My uninterrupted streak of New York Times online crossword completions had been in the top ten for close to a year when we left for Washington nine days ago. In fact, I completed the Sunday puzzle in the car (relax, Amy was driving) as we left I-5 and headed northwest to the Olympic Peninsula. That gave me, I believe, 988 consecutive puzzles. I was still solidly in seventh place. I had high hopes of maintaining my streak as we hiked: when I made reservations at the Elk Meadows B&B, Joy Baisch assured me AT&T had coverage at least in the high places throughout the national park, and we were planning to hike up to passes on both Monday and Tuesday. That might put me a few hours behind my usual completion time--I almost always submit puzzles within a couple of hours of their release, at 7 p.m. Pacific time the night before they appear in the Times--but I'd stay on track, and Wednesday we'd be out of the park, enjoying an early dinner
Post a Comment
Location: Dosewallips River, Olympic National Park, Washington, USA
Read more
More posts