Showing posts from September, 2018
Show all

Mark Judge and Brett Kavanaugh, c. 1982 I was not one of those boys. The boys I hung out with were not like those boys. But I certainly knew some of those boys, knew how they behaved, how they talked, and what they did when they weren't at school. I'm a few years older than those boys. The high school I attended was a rural public school, not a posh urban prep school like those boys went to. But I knew athletes like those boys--and also athletes who were definitely not like those boys. I also knew other boys whose love of alcohol, tobacco, and marijuana kept them off the teams, and some of these non-varsity boys very likely engaged in similar pastimes to those boys. Again, I didn't typically associate with them. I willingly embraced my parents' puritanism around controlled substances, and while my attitude toward them has loosened up in my adult years, I still am uncomfortable around people who use them to the point of impairment. As a college student
Post a Comment
Location: Portland, OR 97229, USA
Read more 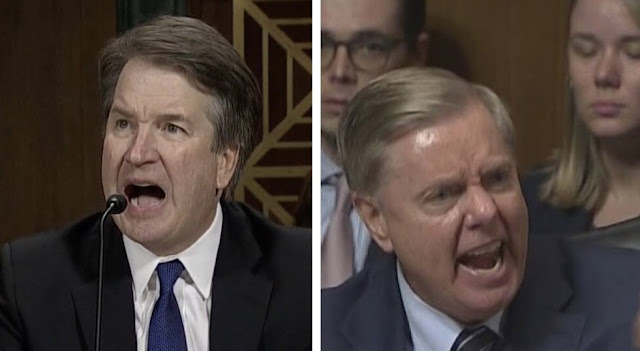 Brett Kavanaugh and Lindsay Graham are angry about the same thing: a woman has challenged their entitlement. I love being a music teacher. It's physically, mentally, and emotionally challenging--by the time I leave school, my Apple watch tells me I've completed all my exercise goals for the day, and at the end of my commute, I frequently take a nap in the driveway before leaving my car--but it's the best work I've ever done, and it saddens me to imagine not doing it when I retire in a few years. The previous paragraph is actually a slight exaggeration: I'm rounding up from 96%. That's the percentage of children I typically see who, despite their many problems--and this includes homesick kindergartners crying for mommy, emotionally disabled kids hitting each other (or me!), hyper kids that literally can't stop wiggling, impulsive kids who can't keep themselves from touching and playing instruments without permission, anxious kids who hide in th
Post a Comment
Location: Portland, OR 97229, USA
Read more

These boundaries go better with seat cushions. So much gray hair. That was my first thought walking into a sanctuary with 120 of my fellow United Methodist clergy for the "Healthy Boundaries" workshop I was grudgingly giving up a Saturday to attend. Many--most?--of the middle-aged and older ministers (there were perhaps three under the age of 40) filling the pews were there because, as the workshop leader acknowledged in her opening remarks, our presence was mandated. We'd all received letters and emails telling us that, to remain active in ministry, we had to attend. Now, I'm no longer a parish minister--my status is "honorably located," and as a public school music teacher, I'm under no supervision at all--but the waiver I would've had to sign to skip the workshop, stating I would not engage in any  of the tasks of the pastoral office, was so broad (it included "teaching," for instance) that I decided to grit my teeth and go.
Post a Comment
Location: Portland, OR 97229, USA
Read more
More posts