Showing posts from May, 2013
Show all

That Reminds Me of a Story

"You're going to tell one of your stories! I can't stand to hear another one of your stories!" (Secretary of War Edwin Stanton, in Steven Spielberg's Lincoln ) For a good chunk of my life, I was a preacher. Preachers use stories to illustrate. It's a practice that goes back millennia. Jesus told many a parable, as did Buddha. The points made by the stories are not always obvious, and in fact, it's often best if there's not a simple, one-to-one correspondence between the story and the lesson. Parables, in particular, are stories that come at a teaching from an odd angle, and may contain multiple lessons, some of them not even intended by the storyteller. The sign of a great story, as with any work of art, whether performed or visual, is the life it takes on independent of its creator. A truly masterful story will have a different meaning for every person who hears it. This can be frustrating for people who would rather have something simple, de
Post a Comment
Location: Portland, OR, USA
Read more

I'd do that for free! 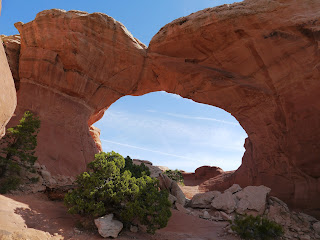 December 30, 1999: the day I discovered my favorite place on earth. The occasion was my second post-divorce retreat to the desert. In December 1995, I drove to Utah to tour the national parks, something I had wanted to do throughout my first marriage but had never been able to interest my wife in. As luck would have it, though, that trip coincided with the Clinton/Congress budget standoff, and all the national parks were closed. I was able to see parts of a few, but only if they were visible from the highway (Capitol Reef, Zion, and on my way home through California, Death Valley). Within days of my second marriage ending, I knew I would repeat the odyssey, and this time I'd see Arches. On New Year's Eve, I made it. I only had one short winter day to see as much of it as I could. In term of size, Arches is actually one of the smaller western parks. It's possible to see most of the highlights in a single day, and I set about doing just that, visiting Park Avenue, the B
Post a Comment
Location: Portland, OR, USA
Read more

There's Money to Be Made

Forget "E Pluribus Unum." The real motto of the United States is "There's money to be made." It's no accident we print "In God we trust" on our cash, because materialism is our true national religion.   This first struck me my sophomore year of college, when I took Econ 101. The professor told us a story of Soviet athletes (this was nine years before the Berlin Wall came down) visiting the United States, and being shocked by the sheer variety of products on grocery shelves. Granted, they came from what was, at that time, a planned economy, and they were often lucky to find one version of a product on the shelves, let alone the half dozen available at even a small market in America. But the question they asked is even more relevant today than it was then: Why do we need that many brands of ketchup? Or, if you really want to blow your mind with how many ways the same product can be packaged, take a look at the toothpaste aisle. I did just
Post a Comment
Location: Portland, OR, USA
Read more

That's Gyp Rosetti, a very scary gangster in HBO's Boardwalk Empire. He spoke that line during a tense standoff, one of the few times in the series when everybody having guns didn't end in a shootout. In Boardwalk Empire , guns exist to be used on others. It happens a lot. The third season climaxed with a citywide gun battle, bodies piling up all over Atlantic City. Everybody having guns is a symptom of everybody being scared. For the last twelve years, Americans have been afraid. Someone sent me this graphic in 2002:   With planes hijacked and crashed into buildings, anthrax in the mail, terrorist organizations plotting further attacks, perhaps we had cause to be afraid. In such a climate, it should be no surprise that Americans are buying guns, that people who previously would never think of owning a killing device would want one in the nightstand. But there are some real problems with that kneejerk reaction. First, none of the people we were afraid of in 200
4 comments
Read more

Methodism is a non-credal denomination.   Ostensibly that means Methodists do not have a statement of faith to which they must adhere in order to belong to the church. That should mean there is no such thing in Methodism as heresy, as to be a heretic is to act contrary to the dogma of the church. And in traditional terms, Methodists remain non-dogmatic. While Methodists are expected to believe in the Trinity, the Resurrection, and other doctrines typical of Christians throughout the world, there is no one way in which they must believe. Methodists can believe, for instance, that Jesus was a great teacher and historical figure, but that the miracles presented in the Gospels are symbolic, that the Resurrection describes something that happened in the disciples' hearts, that, in fact, all the teachings about the divinity of Christ are metaphors for how humans can find spiritual fulfillment through prayer and good works, and still be fully within the fold of the church.
Post a Comment
Location: Portland, OR, USA
Read more

E pluribus unum: out of many, one. That's our United States of America summed up in three neat Latin words. To the world, we're a single, monolithic entity, the only true superpower left. American culture has conquered the world. McDonalds, Starbucks, Wal-Mart--our corporations are everywhere. American tourists are known for their loud, aggressive friendliness. We don't mean to be rude, but sometimes we just can't help ourselves.   25 years ago, I had the privilege of spending two years serving an English Methodist/United Reformed congregation. It was a "united church," a merger between two Methodist congregations and one from the United Reformed denomination, and as such, it had an ongoing identity crisis. Every time there was a pastoral change, the position had to constitutionally switch between Methodist and United Reformed. My first wife, Brenda, and I came to Trinity Church as a clergy couple with one year of student pastorate experience behind
2 comments
Location: Portland, OR, USA
Read more 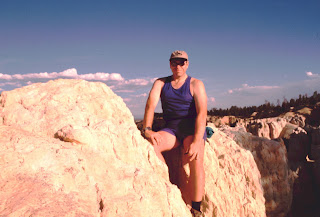 Get a load of the quads on this guy. It's September 25, 2001, two weeks after the towers fell. Two days ago, I completed my seventh marathon, the Top of Utah, setting a personal record of 4:19. Today I hiked every trail at Bryce Canyon. Every single one of them. I will never be this fit again. Four months earlier, I ran my sixth marathon, the Avenue of the Giants, and spied a t-shirt on another runner claiming membership in the "50 States Plus One" club. That person had run marathons in all fifty states, plus the District of Columbia. I knew in an instant that this would be my lifelong fitness goal. I already had three states under my belt: Oregon, Washington, and now California. Utah was next. I got home from that trip, and began planning to add another state to my list. Perhaps Arizona, or New Mexico, or even Texas, someplace warm enough for an early spring marathon. I took my usual month off, letting the massive blisters from Bryce Canyon heal, and began easing b
Post a Comment
Location: Portland, OR, USA
Read more

Why We Can't Have Nice Conversations

This. Is. A. Book.   So spoke the seminary professor after throwing a Bible to the floor and stomping on it. I never witnessed this act--it was years before my arrival at Perkins--but it was a story the professors I knew loved to tell. I don't remember the name of this particular professor, but I wholeheartedly agree with the point he was making to a shocked classroom of East Texan Methodists: idolatry is a sin. Anything besides God can be made into an idol, including, perhaps especially, this book. And yet Christians of every persuasion routinely assign it more weight, power, and authority than the God it supposedly tells them about--the one this very book quotes as saying not to make idols of anything, including books.   You may, like those East Texan seminarians, be in a state of shock that I am casting aspersions on this book. You may consider it the Word of God. You may even consider it the inerrant Word of God. If that's the case, it's best you stop rea
Post a Comment
Read more

A is for Arbitrary

Midlife is a time when things start to slip away. I'm sure I've peaked as an endurance athlete; if I ever again run in a marathon, there's no way I'll come close to the 4:19 PR I set at the age of 40. Much of the detritus I accumulated in my early adulthood now seems redundant, so a few years ago I shed about 75% of my book collection. Eight years ago, I had to accept that I would never be the school parent I had always wanted to be; 700 miles is just too far away to help with homework, attend parent-teacher conferences, or be my kid's biggest fan at a concert. (Teaching high school and being in a relationship that includes adolescent children has given me another shot at this last one lost opportunity.) And memory--ah, memory. The brain becomes so crowded with past experiences. Many of them blur together in a way that I see the Game of Thrones writers compositing redundant characters and plotlines. Realizing that's happening, that my subconscious is cons
Post a Comment
Location: Portland, OR, USA
Read more
More posts