And Now the Sadness 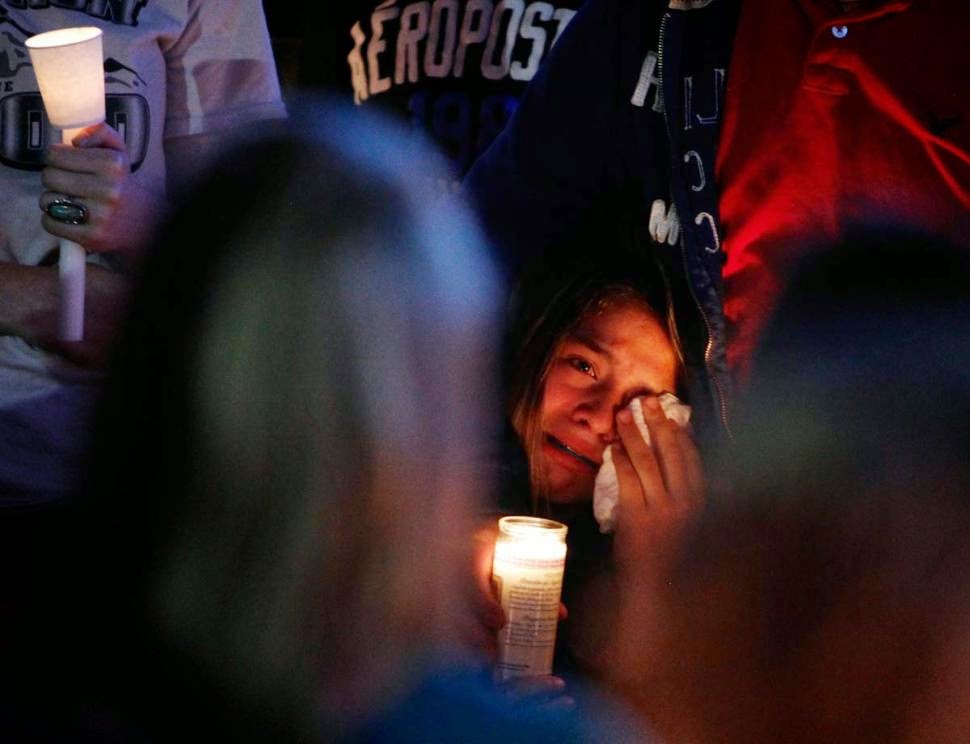 It took me by surprise.

Yesterday, a Reynolds High School freshman broke into his parents' gun locker and took an AR-15 type rifle, along with magazines capable of holding hundreds of rounds of ammunition, a semi-automatic pistol, and a large knife to school, where he shot another freshman to death and wounded a teacher. The teacher was able to escape to the office and initiate a lockdown. With police closing in, the shooter took his own life.

I've written about my outrage over the laxness of American gun laws many times. The knowledge that, in this case, the gun had been locked away by "responsible" owners lends the lie to the notion that these weapons have any business being in the hands of enthusiasts. A teenager with a death wish will find a way around the locks. It's fortunate--if we can call it that--that there were just two deaths. Given the firepower and the quantity of ammunition, there could have been dozens.

But I'm setting aside the outrage now. For more than 24 hours, I've put most of my emotions in a container so I could focus on the children who I'm teaching for the last time. That container began to crack this morning during the end-of-the-year assembly. A slide show was projected before the whole school, image after image of smiling children, accompanied by a sound track of popular songs. One of them started out softly, but the children knew what it was and began singing along. I didn't recognize it until the chorus set in, and the cafeteria erupted with hundreds of child voices singing, "Let it go! Let it go! Let it go!" The effect was incredible. For all the jokes we've been telling about that song and how tired teachers are of it, hearing it this way was powerful and moving. I found myself choking back tears, glad the room was dark enough that no one could see me dabbing at my eyes.

I had just three classes after that. Two of them got videos; the other, a combination of two stories I like to tell: "The Freedom Bird" (which I have now modified to add a more powerful, but also more nuanced, anti-bullying message) and "The Guava Hunt," which is just good silly campfire fun. The final group of children left, and I moved things around getting ready for tomorrow's move back to Margaret Scott School, dropped in on the 4th/5th grade talent show (mostly lip syncing), and finally came back to my office. There I read an email announcing that Reynolds will hold its graduation as scheduled tomorrow night, then opened up my browser and found the Oregon Live story that divulged the identity of the shooter, as well as many details I hadn't previous known. I scanned through a photo album that included shots of the young man in typical teenaged poses: selfies, hanging out with a friend. And then it hit, without warning, and I began to weep.

Tomorrow night, 600 or so seniors will walk across a stage at Reynolds High School to accept diplomas. It's a time for joy, for gratitude, for hope, for anticipation. This year, it's also a time for grief. It will always be there for them. Whenever they look back on this moment, their memories of it will be clouded with the knowledge that one of their own, for reasons that may never be understood, took an assault rifle and turned it on his fellow students, and one of them died.

As a teacher, as a parent, as a human being, I cannot begin to describe my own sadness over this event--though I can, and will continue to, express the anger I feel when, as you will see exemplified by the comment section of the Oregon Live story, gun lovers paradoxically turn these children's trauma into yet another soapbox for their demented beliefs.

What grieves me most is how many young lives those who worship guns are willing to trade for their shitty right to own a killing machine. Two more have been thrown in the furnace of your hate engine, gun lobby. How many more? How many will it take to get the rest of the country screaming loud enough to finally be heard, so we can start melting these abominations down into something that's actually useful?
graduation gun control gun lobby NRA Reynolds High School shooting
Location: Reynolds High School, 1698 Southwest Cherry Park Road, Troutdale, OR 97060, USA