To Gig or Not to Gig 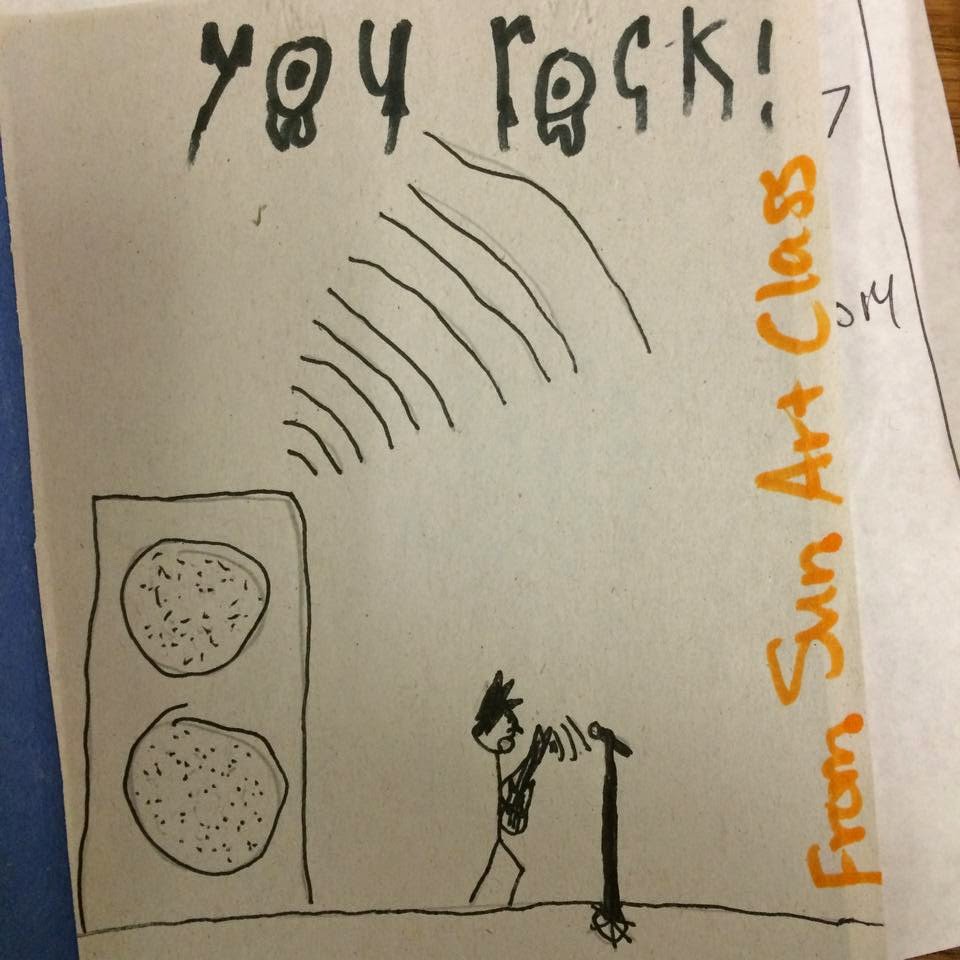 Yes, that's supposed to be me there, playing the guitar and (presumably) screaming into the microphone. It was drawn for me by a fifth grader. I love it.

I also must, in all honesty, confess that it's not true. I don't rock. I've been known to swing, to jive, to groove, to get down, to jam, and more; but when it comes to rocking, that's not really my bag.

All of the above verbs refer to performance--musical performance, to be exact. And don't get me wrong, I love to perform. I just don't need a spotlight when I do it.

But I'm getting ahead of myself. The occasion for this essay is a conversation I had yesterday with a fourth grade teacher who asked me if I play for fun. He told me he likes to unwind at the end of the day with a ukelele and a microphone, recording himself and using the playback to improve his playing and singing. I told him about Comedy Sportz, which is my only performance outlet at this time, and that I really do it for fun (though I don't mind the modest paycheck each month); but that otherwise, I just haven't got the energy when I get home after school to go out and practice with a group.

I miss performing. Sunday I subbed for the pianist who took my place at Parkrose UCC, and it was great to be playing, weaving music in and out of the service, juicing the hymns, improvising a prelude, offertory, and postlude that fit the theme for the day. It was great to come back to that, but I knew as I drove away that it's not something I can do regularly. I need my weekends.

Occasionally, I drop in on the Comedy Sportz pro team workshop to play with them in a rehearsal setting, and that's fun, too. When I started playing for them, I was at every workshop, honing my skills, figuring out what levels work, when to insert something, when to pull back, and always ready if they decided to throw a music game into the mix. These days I'm only there if they have a full-on music workshop. I need my evenings.

This is the cost of full-time teaching at the age of 53: there's only so much of me to go around. If I wanted to, I know I could fill every evening with jamming, rehearsing, and performing. My weekends  could be booked solid. I'd be having a great time, feeling that crack of performance, the charge of parts coming together, of a riff clicking with the band, of being in sync with a soloist, of launching into a solo of my own.

If I gave myself over to that, though, there would be a cost. For starters, my health would suffer. I have to really push myself most afternoons to get to the gym or hit the trails for a workout. What I really want to do when I get home is collapse on the couch until dinner, vegetate with the TV, and go to bed. If I gave into that urge, I would only exercise on weekends, and I've gained enough weight this year as it is. I need time to keep myself strong.

More importantly, my home life would suffer. I'm blessed to find myself, in my middle years, finally in a relationship and a family that I can give myself to without reservation. Like many of my generation, my father was absent during much of my childhood, expected by the congregations he served to sacrifice family life to church life. As an adult in ministry, I faced similar pressures, compounded by the added difficulties of dual-career coupledom. Over time, it became clear to me that "quality time" can only go so far to maintaining a relationship, whether it is with a spouse or children. Quantity matters. Children want to see their parents for more than just game nights and vacations. They want them around at dinnertime, on the couch watching television with them, hanging out on the weekend even if it's in another part of the house. They want to feel their presence, whether or not they're having quality engagement. The same goes for couples. Date nights are wonderful, romantic getaways can put a charge back into a tired relationship, but it's the casual day-to-day time spent in each other's presence that cements a partnership.

I can't give myself over to such time if I'm only home long enough to grab a quick bite before I head off to a rehearsal or gig. When it comes to Comedy Sportz, Amy and I try, whenever possible, to perform on the same weekend night, leaving the other night--Friday or Saturday--free for couple and/or family time. If I did start gigging, I'd have to let Comedy Sportz go to keep that other weekend night free.

So I don't gig much. I'll take an occasional job--the money is nice!--but I don't go around actively seeking gigs. Nor am I taking any steps to put together a combo, something that I would, someday, like to do. If I was still part-time, I probably would. But I'm not. I'm a full-time teacher, and that takes all of the energy and attention I can spare.

Lest you think I'm complaining about my regular job, relax. As I've written many times, teaching these children in this space is hard work, and it does give me a lot to complain about. But it's work I love. I know I'm making a difference to these children. When the buses pull away next Wednesday from the Hartley parking lot, it will be the last time I see the children at this school as my students, and I know I'll mist up. They do manage to show me, every day, how much they want and need what I'm bringing; and while I may not get the rapid results I would in a proper music room with appropriately sized classes and fewer behavior issues, I do have an interactive audience eight times a day who are eager to create music with me.

That's the part that really makes me feel like the rock star in the picture at the top of the page. I'm not a rocker, per se--one year playing keyboard for a cover band does not a rocker make--but I do, when conditions are right, have the kind of symbiotic connection with my students that one sees at successful rock concerts. When that happens, it's as rewarding as any performance gig I've ever had--no, strike that, it's far more rewarding. No, I don't get to show off my mad skills at the keyboard, but I do get to create a musical experience with 25-32 children that blows our minds.