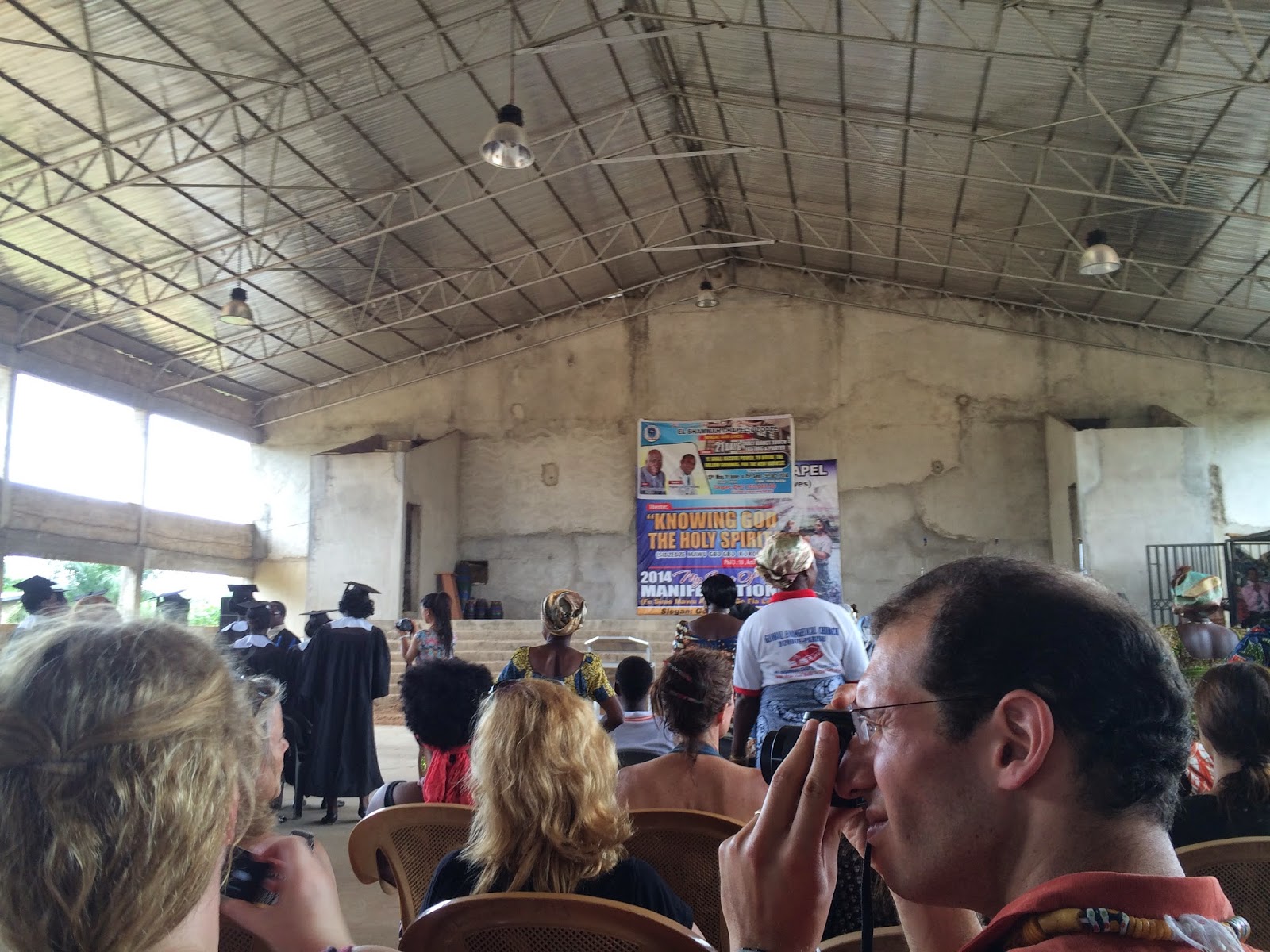 I grew up in church. Until last November, I spent almost every Sunday morning of my life in church. Even on vacations, I usually found a church, though as I grew older, I felt less and less need for that observance. Church had become a job, and little more. Finally, last November, I resigned from a good paying church job because I just needed, for the first time in my life, to have weekends. I haven’t looked back.

With all that said, church is still a comfortable place for me to be. I speak the language, I understand the way people think and interact, and even though I may now find those customs and ideas far less attractive, and find some of them offensive, I know that church is, and always will be, a place I can fit right into, no matter where it is or what its practices are.

So Sunday morning in Ghana, knowing we would be attending a church in Dzodze—though strictly for sociological reasons, to see how they made use of Ghanaian music in a western religious context—I expected to feel right at home. My happiest church experiences in America have been in African-American churches, and I expected this to be similar. I wasn’t wrong: the warm handshakes, the sense of casual formalism, the dual offerings, the way music could take off and grow into something huge and powerful that moved people to tears and collapse, all felt familiar. There was a language barrier, though the church, in honor of our presence, was going out of its way to present the service in both Ewe and English. There were also long periods of administrative details: announcements, the pastor lecturing the congregation on how important it is to join, not just attend, this church. And finally, there was a seemingly endless boilderplate evangelical sermon by a guest speaker presenting an Augustinian lecture on three states of grace that descended at one point to a screed about hellfire and how all the sinfulness of unchurched people—and of some churched people—was going to subject them to an endless fire a hundred times hotter than any they’d ever experienced.

I know my fellow students were squirming through much of this, not just because of the awkward theology, but also because it went on so long (due in part to the need for the translator to repeat everything the speakers said). I could sense they were thrilled by the music, and impressed by how it affected so many of the congregation, many of whom engaged in traditional Ewe dancing—which looked quite out of place in their Sunday finery. Doug Goodkin, our Orff guru, spoke briefly to thank the church for its welcome and to acknowledge that while we come from many faith traditions, we all are part of the same spirit. This received a rousing “Amen” from the congregation, though I suspect it didn’t sit too well with the guest speaker.
We left after two and a half hours, with the service likely to go on for another hour at least. We had another service to attend in the afternoon, and we needed to get lunch first. 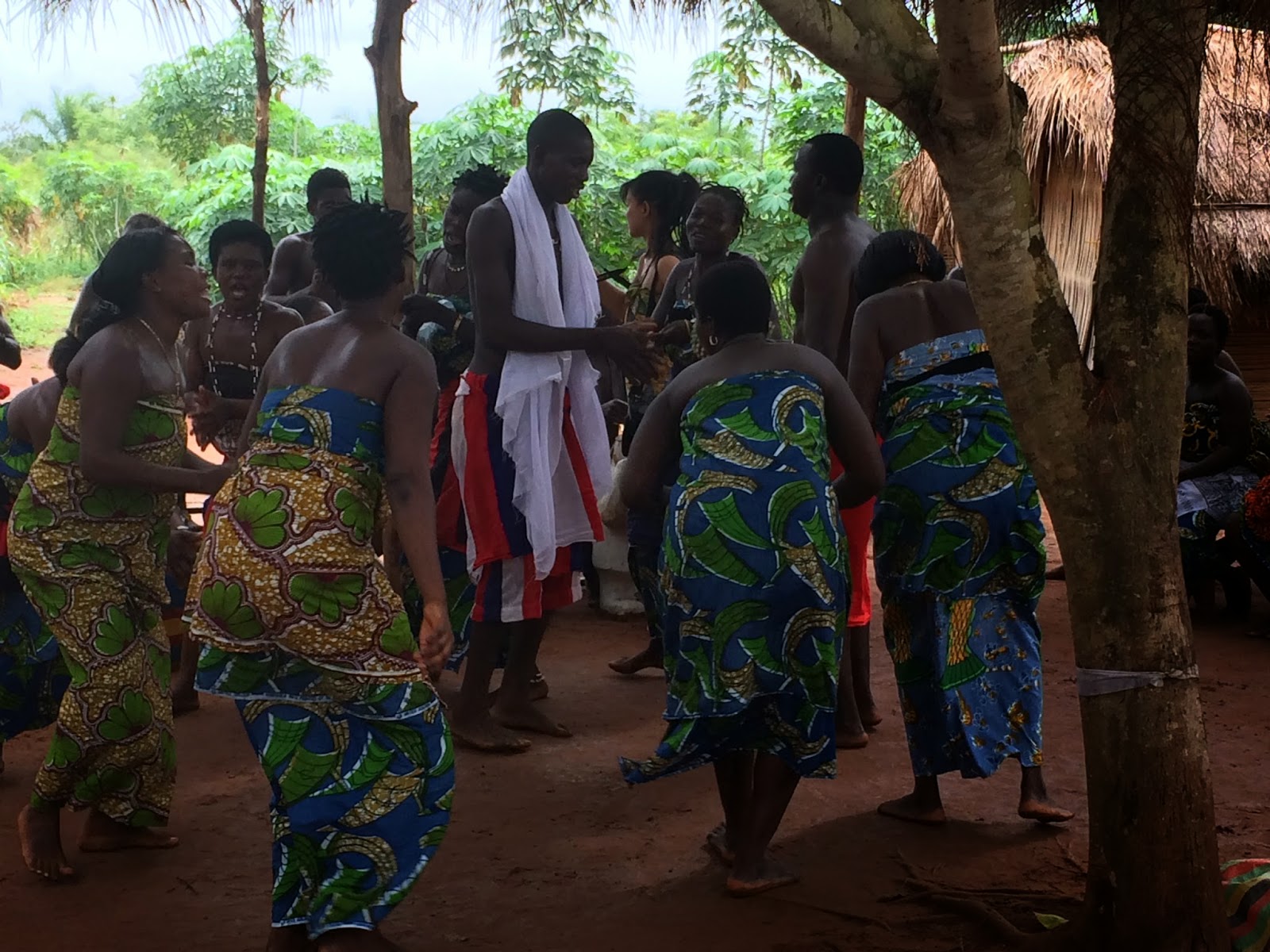 That second “service” was a religious ceremony going on at Kofi’s family shrine. As lengthy as the service at the Evangelical Presbyterian Church had been, this event was an all-day affair. Just as we had been expected to dress up for church, we had to alter our dress for this ceremony: women had to have bear shoulders, so all the men left the bus while the women removed their tops and wrapped themselves, top and bottom, in Ghanaian cloths. Men were also expected to be topless, so we removed our shirts, and put on more of the Ghanaian cloth in a way that resembled a sarong. After walking down a dirt road from the bus, we had to remove our shoes to cover the last few feet to the shrine. The ground was squishy red clay, mostly dry, but it had been raining, and there was no avoiding stepping in mud at several points.

The shrine was, at first, like many of the central squares at which we’ve seen musical celebrations, and what we saw bore many similarities to those events, though on a much smaller scale: a bench of drummers playing complex polyrhythms while about a dozen dancers sang and spun around a young man who was leading the singing. There were other, older members of the family sitting around us, and also some adults moving around, occasionally joining in, but mostly seeming to act as managers.

The area was filled with totems and symbols, and clearly much of what the singing dancers were doing was prescribed by tradition: the paint on some of their faces and bodies, the grass skirt and much more frenetic steps of one male dancer, the grass covering a teenaged girl who was holding a calabash of some sacred liquid on her head, after being led in along with a boy who held a bowl with some other symbolic item—a yam, perhaps? Both were expected to stand absolutely still. The girl’s face was concealed by the grass coming down in front of her face, but the boy’s face was visible, his expression stony.

We’d been warned there might be people going into trance, and this certainly happened. The first was the young girl with the calabash, who began to weave, the liquid sloshing onto the ground, then to stagger in one direction or another, until being led back by one of the managers. One of the dancing women was next, suddenly dashing from the dance to spin around the ground, alternately threatening people (including the children) with a sharp ceremonial object and vigorously shaking the hands of everyone, including our group.
Then came the trance that frightened me: the young man leading the songs suddenly stopped, staggered away from the circle, fell to the ground near us, apparently unconscious. The managers tended to him, making sure he was all right. A few minutes later, he leapt to his feet, ran away from the ground, then came back with an empty gin bottle in his hand. Now he became interested in our party, particularly in me, and pulled me off the bench to dance. I saw that Kofi’s brother Prosper, who was our guide through this event, was nodding encouragement, seemed unfazed, and was joining us. As he did, one of the managers pulled the bottle from his hand and tucked it away somewhere. I danced with him for awhile, putting all the training I’ve been having this week to good use, apparently did well enough to satisfy him, and was able to sit back down. The young man then made the rounds, shaking hands firmly, howling from time to time in a manner that led us (after the fact) to refer to him as James Brown. He disappeared again, came back with another empty bottle, threw himself at our feet, and smashed the bottle on his head. The women rushed in, hustled him away, and cleaned up the glass.

Soon after that, we politely left.

Looking back at both events, I am startled to find—and if you’ve been shocked by the traditional ceremony I described, this may shock you—great similarities between them. Yes, the Christian service was heavily influenced by the role of western colonialism in suppressing native forms of expression; even so, it manifested much of the same spirit I’ve felt in many of the performances and events we’ve been to, including the traditional ceremony: a flexible understanding of time, a sense that spiritual events take as long as they take, a friendly encouragement for outsiders to feel at home and participate, and most important, total commitment on the part of the worshippers. This was far more evident during the musical portions of the Christian service than when one or another speaker was droning on about the importance of membership or the perils of hellfire, but there was still no question but that the congregation was fully engaged, body, soul, spirit.

All of this was present in the traditional ceremony. The energetic music that seemed to go on forever, the singing, the dancing, and the power of these acts to bring people into a hypnotic state of spiritual possession, are all things I’ve seen in Pentecostal services, and even some mainline Protestant Black services. Had the music continued at the church, we might well have seen some of the congregants being slain in the spirit, speaking in tongues, prophesying. The way in which the community at the traditional ceremony both respected and guarded those who were in trance, giving them room to do what they were driven to do but simultaneously chaperoning them, removing harmful objects if it seemed they might use them on others and, when the bottle was somehow brought back, cleaning up the mess so quickly, protecting our bare feet—all of this felt familiar to me, an extension of the open welcome we’ve experienced so many times.

With that said, I’m not comfortable with a lot of what went on in both services. I will admit to, at times, being envious of those who can so freely give themselves over to the Holy Spirit that it knocks them out, channels incomprehensible speech through their mouths; and similarly, the trance state of those Ewe I saw yesterday had a freedom to it that is utterly foreign to my own, so very Swedish, personality. I long to be able to let go, to be uninhibited, unregulated, just free to be.

But I don’t want to do it like that. And in fact, I do manage to be free, to cut loose, when I am making music, when I am engaged in an Orff training, and most of all, when I am teaching children. These are the moments I can most let myself be myself, without all the strictures that usually keep me quiet, polite, out of the spotlight.

Doing it as a spiritual practice, though, is not who I am. Spiritually, I am most free when I am disciplined: when I am climbing a trail, writing, employing my musical abilities, using my brain and body to do something transcendent. Letting my emotions have free rein is just not my style.

But it certainly was impressive yesterday. In fact, as I told Doug as we left the shrine: “That was the friendliest terror I’ve ever experienced.”
Labels: Christianity church evangelicalism Ghana Orff-Afrique Pentacostalism traditional religion trance
Location: Dzodze, Ghana