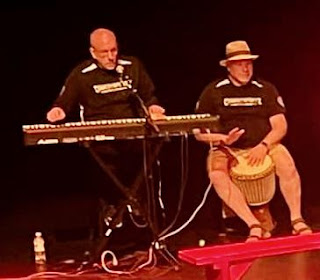 That's Patrick Short at the keyboard, yours truly on the djembe.

Everyone reading this is a musician.

So is everyone not reading this. In fact, I can say with absolute conviction that every human being in the world is a musician.

But wait, you're thinking, I don't play an instrument, I never sing in public or even in my car or shower, so how can you call me a musician?

It's very simple: even if you no longer make any effort at all to make music of any kind, there was a time in your life when you did. You may no longer remember doing it, but when you were a child, you sang, you banged on things, you organized sound with your mind and performed it with your body. It's part of our hard-wiring as human beings. The first vocal experimentation babies do is singing. From the moment they're physically able, they move their bodies when music is played. And their earliest manipulation of objects is to turn them into percussion instruments.

You may have had this trained out of you at an early age. Not all adults appreciate the beauty of the child voice, and few of them have a high tolerance for pot-banging. If your personality type leans more toward introversion, you probably decided at some point that solo singing was too showy an activity for you.

I'm self-describing now. I'm a quiet person who feels uncomfortable interrupting in conversations--which, if I'm in the presence one or more extraverts, may mean that I don't say anything for long stretches of time. As a child, that often manifested in reluctance to sing or speak in public loud enough that I could hear my own voice echoing back to me.

That's why, despite growing up in a musical family, I gravitated early on toward instruments: first the piano, then the trumpet. These are not, I will point out, quiet instruments; in fact, trumpet players have a reputation among musicians as being both literally and temperamentally the brassiest people in the band. My preference in trumpet music has, I must say, always been for the more lyrical and introspective side of the repertoire; but still, it was an odd choice for a quiet fellow like me.

Not opting for the glory, I often found myself being asked to accompany others on the piano: choirs, congregations, soloists, and, most satisfyingly, improvisers.

I majored in music education in college and graduate school, planning to be a band director, but again, that really wasn't where I fit temperamentally. Successful band directors are spotlight-loving people, with big, magnetic personalities. I washed out of that career in less than a year, then went to seminary to pursue another job I wasn't temperamentally right for: my father's profession, the pastorate. As a pastor, I excelled at scholarship, teaching, creating liturgy, and preaching, all places I could exercise my artistic and musical strengths. But successful pastors are a lot like successful band directors: magnetic people who draw others into their orbit. That was never me.

So I returned to teaching music, focusing now on the age group that still loved to be spontaneously musical: young children. And that's where I settled and will stay until, in a few years, I retire.

Along the way, I discovered another outlet for my musical performance needs: improv.

To be clear, I've always been an improviser. I started improvising music at the piano as a baby. Given the chance, all babies do. I have no memory of what that was like, but I do remember being five years old, just starting to learn piano technique formally from my mother, and, when she wasn't around to make sure I was practicing, improvising a musical fairy tale with different voices in different registers of the keyboard. As a teenager, I improvised music at the piano whenever I had the chance, and have continued doing it all my life, adding other instruments to my improv repertoire as I've learned to play them. As a seminary student, then pastor, I chose from the beginning to deliver sermons extemporaneously rather than reading from a manuscript, and that's how I've taught.

What all those improvisation avenues lacked was partners. And that's where improv--both short- and long-form--has provided me with the satisfaction and recognition I've always craved.

Improv is a brain-bending activity. Great improvisers have to always be both a step ahead of whatever's happening and utterly present in the moment of the game, listening intensely to everything their partners are doing, affirming and heightening it, moving it all forward in ways that can be surprising not just to the audience, but to the players themselves. That's true even of the improvisers whose voices the audience never hears: the instrumentalists creating the musical world in which the players on stage can make their own musical magic happen. We start, shape, and edit songs, both guiding and following the singers, matching, pushing, and pulling back on tempos, switching modes and keys, building climaxes, creating satisfying conclusions, underscoring the action, telling sophisticated musical jokes that sometimes not even the improvisers get; and in the end, when the bows are taken, we're very happy to be acknowledged by the rest of the cast, but really don't mind if we're not called up to take a bow ourselves.

And if we're not acknowledged--well, that hurts. Because even though we don't do this for glory--in fact, some of the most satisfying improv I've done has been at rehearsals where just my local ComedySportz club was all the audience I had--we do need some recognition.

Which brings me to the ComedySportz World Championship I just attended in Seattle. I've been looking forward to attending one of these for almost as long as I've been playing with CSz Portland: thirteen years. More than attending, I've wanted to play with improvisers from other cities, for audiences that haven't had the chance to hear what I do. Last Thursday night, I finally got to do that. Unfortunately (for me), the teams playing weren't interested in any musical games while I was at the keyboard, except for a rap game I supported form the cajon. But I did my best to be a good sport about it (though I must admit, I did some internal sulking). The second show that night, the owner of my club, Patrick Short, was the keyboardist, but asked me to join him on stage to drum and (a first for me!) play trumpet for one game. In the end, that game was swapped out for something less...sophisticated (Fartz!), but still, it was nice getting to play the djembe this time.

What felt nicer was having the announcer call our names out for a very public appreciation of what we'd contributed to the show. And what felt nicest of all was when, between shows, one of the players saw me getting out my trumpet to take it to the stage. "Is that a trumpet?" she said. "You really are a magical human being!"

Wow. That's something I've thought for years about my fellow improvisers. What they do really does some like magic to me. I don't spend a lot of time on the improv stage at practices because I know my abilities in that area are pretty rudimentary, and it blows me away when I see the sophisticated things they pull out of thin air. At times I need to remind myself that I'm creating magic of my own when I improvise music, that I'm every bit as integral to the miracle that is a spontaneously created stage show as the people in the spotlight. And it helps so much to have one of them remind me of that.

So all you improvisers, announcers, referees, emcees, and audience members out there: if a live instrumentalist is a part of a show you're enjoying, let them know how important they were to the magic you experienced. It'll mean the world to them.