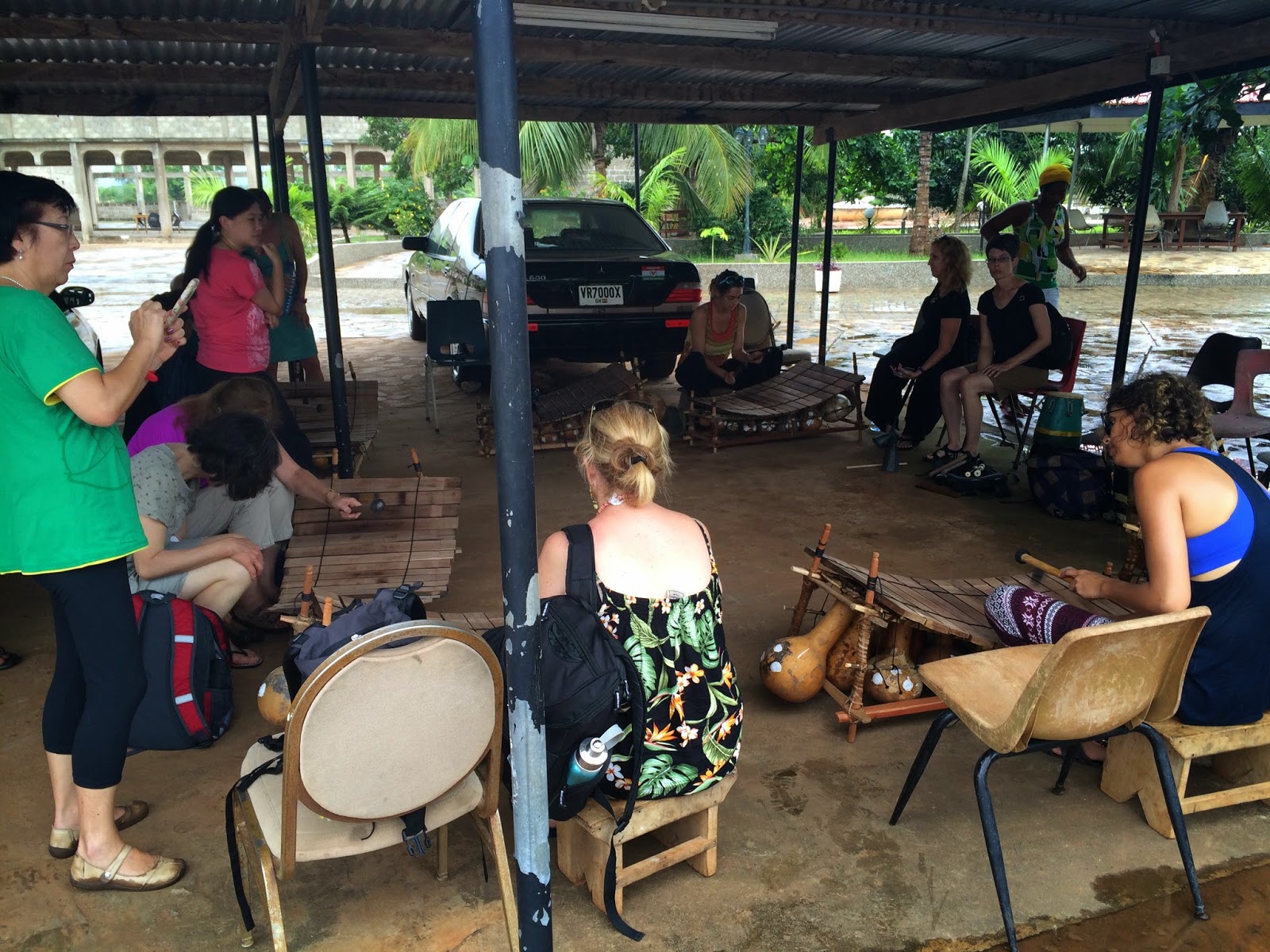 The greatest challenge to the classically trained western musician—or to any musician, including jazz, rock, country, Latin, whatever field, who has studied in the west—in adjusting to traditional African music (and here I include the entire continent) is the oral nature of its preservation. Until the arrival of European ethnomusicologists, none of this music was written down. Free of the printed page and the necessary strictures of notation (systems for recording meter, rhythm, duration, pitch), African musicians created music of incredibly complex polyrhythms with little or no regard to where the beat would fall. When they dance, they find it with their feet. When they play, it floats freely.

Lacking this frame of reference, it can be difficult for a western musician to figure out the meter of an African piece. During a drum circle experience yesterday, Kofi introduced us to a new bell rhythm, then asked us what meter it was in. 2, 3, 4, 6, 8—we all felt those meters, in one way or another. “You are all right!” he said, then led us through a lesson in keeping each of those meters while playing the rhythm. It was challenging—often it felt like the sort of improv game that leaves players feeling like their brains have been broken—but in the end, we all had it.

Today during xylophone class, Eske taught us—or, really, demonstrated for us—a new piece in 12/8. The challenge for all of us was finding 1. We knew where we wanted it to be, but depending on how you asked him, Eske might tell us it was in a different place—or right where we felt it. He doesn’t notate his music, he just feels it, and he teaches it by modeling. It’s only in creating a version that others can learn on their own, without the benefit of a teacher, that a musician must be particular about the actual location of 1.

Kofi has told us there is no word in Ewe for music, that in fact music is simply the fabric of life. From infancy—before, really, since pregnant women have their own dance—Ewe children are utterly immersed in music and motion. Strapped to their mothers backs, with their legs wrapped around their mothers’ waist, they sleep soundly in the midst of vigorous dancing and drumming. As soon as they’re moving about on their own, they are dancing to the same music they once rode to, using every step that’s been modeled to them for the two years they were on their mothers’ backs. It is not possible for them to imagine a situation where music is not as present as the air they breathe.

Contrast this with western culture, in which music is something meant primarily for entertainment, something for which there is a time and a place, something that can be easily dismissed or cut from a school budget as frivolous. Any school that has done this has quickly learned how the lack of a music program sucks the spirit from the curriculum, and every time I’ve come to a school as a result of music being restored to the budget, I’ve been greeted with wild enthusiasm by both teachers and students. We understand how vital music is, but we’ve lost its importance as a piece of our culture. And we’re not sure how to get it back.

But let’s go back to 1, the first beat, the beat that every western musician has to find as a fundamental reference point before any music can occur:, the first thing that makes a piece possible, especially if it involves more than one musician: ultimately, the best ensembles, the best musicians, just start. They are in communication with each other at a level that is deeper than the metronome. They find the beat, play it, sing it, plunge into whatever they’re performing, and if they’re fully engaged, body, soul, spirit, what follows is more perfect than the most metrically precise performance a band director ever beat out of his players. This is music at the meta level, music under the skin, in the bones, in the lungs and heart and guts and gonads, music that happens so transcendentally that, when it’s over, it’s as if the performers are awakening from a trance. I’ve been fortunate enough to be in that place a number of times in my life, but nowhere near as many as the performers we’ve heard every night, and will continue to hear until we board our airplanes back to our western lives. If I can hang onto this, perhaps I can get myself to let go of 1 when I’m back in the metrical world, the world of numbers of timetables where music is diminished, but still as essential as blood, water, food, air.
African music Ghana Orff Orff-Afrique polyrhythm