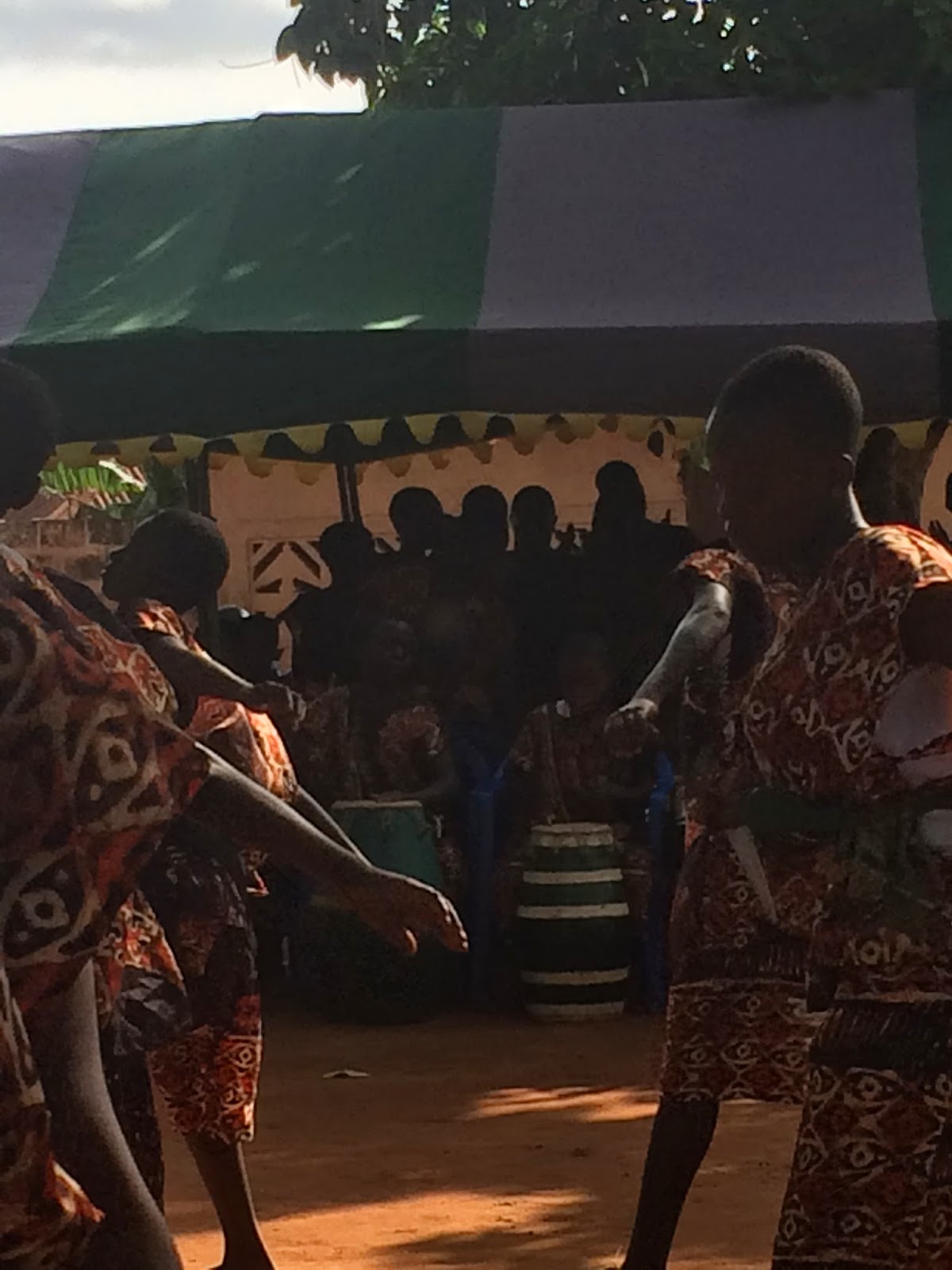 The children played and danced for two hours. They had us on our feet many times, singing, dancing and, in the end, joining the dancers as they moved about the courtyard. Now the concert was over, and the brass band from Nunya Academy, after a prolonged time of being greeted and praised by us, and playing games with us (I taught them “Baby Shark”), were finally saying goodbye.

“May I ask you a question?” said the ten-year-old boy whose stamina on the trumpet had amazed me.

“When do you think you will return to Ghana?”

I felt my heart break.

The Nunya children have performed for us four times in the last two weeks. Nunya is a school without a building, the dream of Kofi Gbolonyo, a local boy from Dzodze who has made it big in the academic world, traveling to America to earn his doctorate in ethnomusicology and finding a teaching position at the University of British Columbia. While still living in Ghana, he envisioned a music school where the poor children of his village could learn to play and sing the both the traditional music of their homeland and of the western world. His brother, Prosper, and cousin, Benzola, teach and direct the children in his absence. From British Columbia, he has, from his own resources, purchased two container-loads of used band instruments, accepting donations only to help with shipping. Once in Dzodze, the instruments are reconditioned by self-taught technicians. Benzola teaches all the instrumental technique; Prosper teaches the theory and directs the band. The academy meets in borrowed space after school. Kofi recently purchased a plot of land outside Dzodze, and intends to construct school buildings there, so that the academy can be a day school where music is at the heart of a full curriculum. 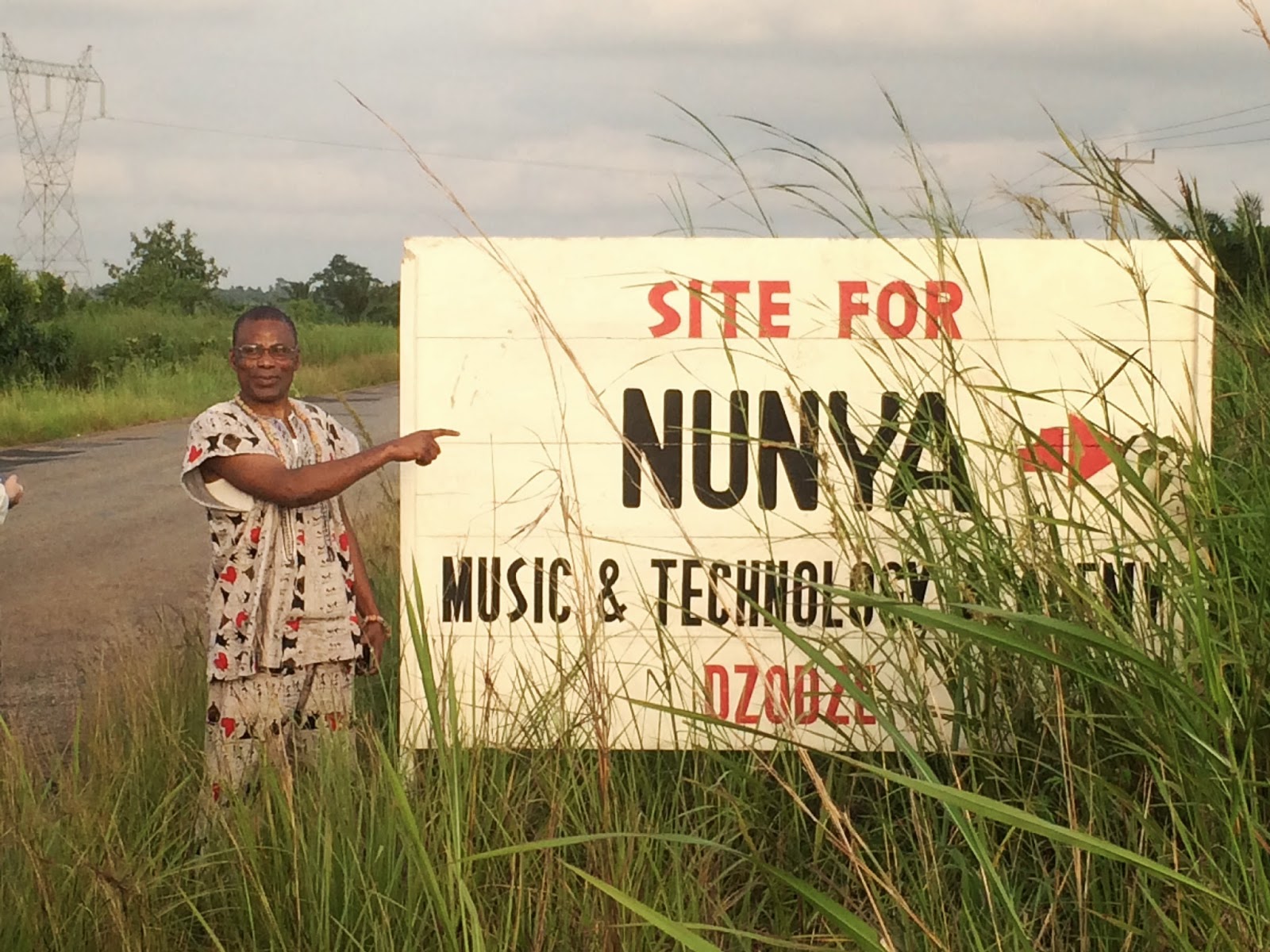 On our second night in Dzodze, the children came to perform traditional drumming and dancing, and they had us. After the performance they stayed for two hours, playing games with us, jamming on the drums, delighting us with their openness and eagerness to try new things. They were back two nights later with an evening of choreographed music games. On Saturday, we were present at a recognition ceremony at which the band and dancers performed. Finally last night, it was the brass band, this time having traveled an hour and a half to the Bob Coffie Hotel in Ho, where we are staying until tomorrow morning.

I have been astonished with how guileless these children are, how much they delight in our attention. They range in age from 10 to 19, so some of them are at the age at which young people find adults hilariously clueless and hopelessly square, and yet these teens were as eager as the youngest in the group to learn playground games from us, tackling them with gusto.

I’ve written many times in this space about how easily I can become attached to children. The last day of school is always a bittersweet experience for me, especially when, as at Hartley, there is a ritual of waving goodbye to the buses. I haven’t taught the Nunya children anything but “Baby Shark” (though had I thought to bring my trumpet, I could have done some coaching, as did two others in our group on clarinet and flute.), and yet somehow they’ve cleared out some space in my heart and climbed inside. When they ask when I’ll come back to Ghana, and I don’t have an answer, I feel my heart break just as it did two weeks ago at Hartley, knowing I would not be returning to that school and seeing any of those children again.

What makes it hurt more is that it’s not just the children. It’s the country. Yes, some of my experiences here have been irksome lessons in the realities of third world living: things happen on a far more fluid schedule than I’m used to, it can take 24 hours to get change for a large bill, vendors expect bargaining and quote prices far higher than what they expect to receive, the water is of questionable quality, the internet cuts in and out, and everywhere (except on hotel grounds) there is litter everywhere—in fact, the village, the town, the city would all look far less shabby if people used trash receptacles—in a word, this place is challenging for someone who has never been outside the first world except for a couple of day trips into Mexico. But the people are like no others I’ve met, friendly, welcoming, helpful, patient with my poor understanding of their accent and complete inability to remember any of the words in their language—or, when I do, to pronounce them in an intelligible way. Their sincere warmth, their delight in seeing a white person take an interest in their culture, and their inclusiveness at drawing us into the dances at every performance and celebration we have been to, goes far beyond anything I’ve experienced anywhere else.

This is a shabby place of dirt roads, mud huts, ubiquitous litter, corrupt officials—everything one might expect to find in a third world country. It is also a thriving democracy with a vibrant culture and an indefatigable spirit that cannot help but win the heart of anyone with an open mind.

Ghana is under my skin. It’s in my blood. When will I return?


I can’t say when, but I know the answer begins with “yes.”
Ghana Nunya Academy Orff Orff-Afrique
Location: Ho, Ghana