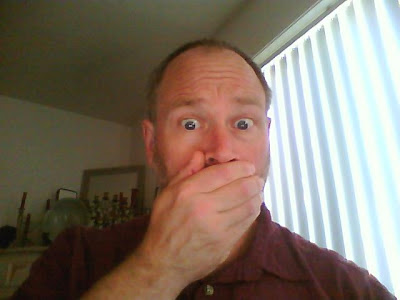 I have a swearing problem.

It's not what you think. If you've ever talked to me for long, you may have remarked to yourself, "I'm not used to a conversation with anyone going this long without a swear word. I wonder what the deal is."

So here's the deal:

1. I grew up in a parsonage (actually, several different parsonages, but that was a topic of a couple of previous posts, so I won't go into it here). It was back in the days before ministers, their kids, or Christians in general used any kind of foul language at all. Before you go into it, yes, I've heard the same stories you have about Preacher's Kids, but either the wild ones are exceptions, or I'm the exception; either way, if swearing was something I should have learned as a kid, I just didn't.

2. Because I didn't learn it, or have it modeled, it always felt weird on my lips, and it still does. I once did an open mike routine about it, and got more laughs from trying to say "Ffffffff.... FFFFFffff..." than from any joke I told that night, or on any subsequent open mike night. (Hence my absence from open mikes ever since.)

3. There's a lot more swearing in my fiction writing than you will ever hear from me. In fact, I almost wrote swearing into that last sentence. My speed-typing hands appear to lack the inhibitions of my mouth.

4. I have been trying to teach myself to swear, but it's been hard. As with any foreign language, until you can think in it, you haven't really learned it. I'm getting there: sometimes I swear in my dreams.

Now, apart from the deal: I've been hearing and reading lately about how swearing is going through a sea change, and I heartily approve. The words that were (and, to a large extent, still are) taboo to my ears and mouth were primarily about bodily functions, the sort of thing that Deadwood turned into scatological soliloquys of dizzying proportions. But even Deadwood is tame next to the kind of language I hear being used every day by young people at Best Buy or Starbucks. Mark Maron's WTF, the title of which is a play on one of those once forbidden but now ordinary words, has further inured me to its use. Everywhere I go, language that would have earned a movie a hard R in my youth is being bandied about with abandon.

And why do I approve of this generational shift away from the shock value of the seven words you can't say on TV? (And by the way, since George Carlin did his classic routine on that list in 1972, at least two, possibly three of those words have entered the common parlance of prime time sitcoms.) Because they're all about everyday bodily functions, and some of them describe those functions better than any other word; and also because it's high time we got over our infantile delight in how naughty it is to talk about sex and defecation. Everybody poops, and most people screw, so what's the big hangup? It's high time we evolved out of our vestigial Victorianism.

So what's to take its place? There's a special place in language for words that shock, and it's not adequately filled by words that are simply naughty. "Darn," "gosh," and other mild versions of religious oaths are long gone from the common parlance, as teenagers are casually tossing around "Oh my God!" with a frequency formerly reserved for "like." And we've already discussed scatological expressions.

That leaves a whole other category of words that, just a few years or decades ago, could be used freely without causing offense: slang terms for race, ethnicity, culture, gender, orientation, and disability; words that have always hurt the people they referred to, but which could be used without fear of rebuke because nobody took those people seriously.

You probably know which words I'm talking about. If you're not sure, think for the moment about the last time you heard someone call an African-American by a racial epithet. Or a developmentally challenged individual a belittling word for stupidity. Or think of how those words have been used as insults for people who aren't in those categories. Finally, remember the shock you felt at hearing that word used, the way it may have affected your opinion of the person who used it, and you see where this is headed.

Slurs are the swear words of our time, and that's exactly how it should be. Instead of getting upset about how someone has used the Lord's name in vain, or has spoken a slang term for an unmentionable bodily function, we're being offended by language that truly is offensive, that attacks the marginalized and uses their condition as an insult. It's a language of violence, and it's not just political correctness to say it needs to be excised from our vocabulary.

My hope is that these words, once accepted as harmless but now increasingly judged harmful, will not follow the same path as religious oaths and scatological language. Instead, I hope they'll disappear from the lexicon as we learn new ways to refer to each other's differences, ways that are affirming of the incredible diversity of the human race.

Of course, if that's the case, we may find ourselves again groping around for offensive language to fill that swear hole in our psyche. Perhaps this time we'll choose something technological. So the next time you're disappointed, perhaps your expression of choice will be, "that bytes!"