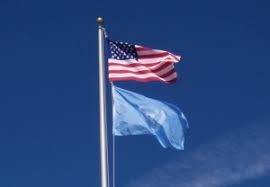 I'm not going to spend any time on comparing it with the apparently excellent novel by Max Brooks, because I haven't read it. Nor will I go into any detail about the plausibility of the zombie virus and the behavior of the zombies, which, apart from a couple of zombie swarm scenes (both "spoiled" in the trailer), they just aren't that interesting. No, the thing this movie most messes up is the role of the United Nations and its relationship with the United States of America.

The zombie apocalypse happens in the first few minutes of the movie, and apparently spreads globally in a matter of hours. Soon Brad Pitt and his family are being helicoptered to an American ship somewhere off the coast of Nova Scotia, where they learn that most of the leaders of the US are already dead--and apparently the United Nations has simply been placed in a position of global leadership. This is the part that is, in my mind, far less believable than the nearly instantaneous transformation of the planet to a zombie playground. There is just no way that the surviving government of the USA would hand over the reins of authority to the UN without even an argument.

Not that I'd have any problem with that. I've always been a UN believer. In college, I was an enthusiastic participant in the Model United Nations. I co-chaired a committee at the Far West Regional Conference in 1981, served on the directorate of the Northwest Security Council, and participated as fully as I could until student teaching took me out of the picture. I loved it. The UN's mission of gently nudging the world toward an interdependent future was something I could easily embrace.

And I continue to embrace it. Interdependence is the best cure for the warbug that infects so much of our world. It's how Europe finally put a stop to its millennia-long cycle of invasive wars. Once nations have interwoven their economies and rendered their borders so porous that immigrations ceases to be an issue, it becomes nearly impossible for those nations to foment war against each other. Oh, there may be rhetoric, loads of it: consider the diplomatic clashes between the USA and our chief trading partner, China. Americans rightly object to Chinese human rights violations and exploitative labor practices, while the Chinese government has always been prickly about any official dispatch having even a whiff of criticism, but any concrete action, whether military or economic, is forestalled by the de facto Mutual Assured Economic Destruction pact between these two nations. We are interdependent; what hurts them, hurts us, and vice versa.

True interdependence runs deeper than economics, the ethics of which grow out of Adam Smith's invisible hand of selfishness. One does not have to be a Trekker to believe in the principles of the United Federation of Planets: supporting and protecting the civil rights and dignity of all peoples, no matter what they look like. These are the distinguishing factors between the European Union and NATO on the one hand, and the United Nations on the other. The UN's charter promotes human rights and humanitarianism. Its agencies promote intercultural dialogue, universal access to healthcare, famine relief, conflict suppression, and human rights gains for all.

It's no secret, of course, that this progressive agenda has often, throughout the history of the organization, been hijacked by far less inclusive ideologies. During the Cold War, the Soviet Union dominated the General Assembly simply by virtue of having more influence in the Third World, giving it more votes in that largely ceremonial body. Meanwhile, the veto power of the permanent members of the Security Council, the executive branch of the UN, guaranteed that no official action could be taken without compromise. This was often paralyzing, and continues to be a weight holding the UN back from truly effective governance of global issues. It is also, however, the only thing keeping the superpowers in membership. Without the veto, both the US and Russia would long since have gone their own ways.

And that's where World War Z really gets it wrong. After initially providing the impetus for creating the UN, the USA rapidly backed off its enthusiasm, ultimately becoming a reluctant, skeptical participant, decrying many of its actions, skimping on financial contributions, and only espousing its principles when they could be seen to serve American self-interest. We were all about the UN when we wanted international help with the Persian Gulf War and, ten years later, with the reinvasion of Iraq, but we have held off for decades signing onto UN treaties that reflect the very best of American ideals. In a real zombie apocalypse, American officials would certainly be appealing for international cooperation through the UN, but only if we got to run the show from start to finish.

This is the central problem of American identity: we are independent, stubbornly, pig-headedly, self-aggrandizingly, paranoiacally independent. Don't you come sniffing around here with your cooperative mutual aid rights for everyone nonsense; we take care of ourselves. This is not all we are: Americans are often friendly, generous people; we just don't like to be told what to do, even if it's by those we agreed on as our leaders. We can be quite mercurial, and will grumble under yokes of authority even if they are consistently acting in our best interest. And if we decide not to like something, we will scream bloody murder if we're required to do it.

This character trait has Washington at a standstill right now. The most vociferous Americans are being dragged kicking and screaming into a health care system that will serve far more of them far better and far more cheaply than that which they currently possess, if they're lucky enough to have any insurance at all. The problem with Obamacare, as with any universal benefit, is that it relies on interdependence, on people working together for a common good; the more who participate, the greater the overall benefit.

I love Independence Day. I have always enjoyed big parades, band concerts, barbecues, and big fireworks shows. This year, though, I gave all of that up to do something out of the ordinary. One of our friends has an annual custom of inviting people on an evening hike to the top of Silver Star Mountain, a peak in Washington state with a grand view of the Cascades and sweeping vistas of the Portland/Vancouver metropolitan area. On a clear day, the sunset is spectacular, and then, as the sky darkens, flashes appear across the horizon, first from all the amateur rockets going off (and in Washington, they're legal), then from the big shows in Washougal, Camas, Portland, and the granddaddy of them all, Fort Vancouver. It's something to see.

Amy and I signed onto the hike and caravanned to the trailhead with all the others. We've been up Silver Star once before, on a clear day in May, and the view was everything we'd heard it was, and more: the wildflowers were like a vegetative fireworks display, red, purple, blue, yellow, orange, white, the slopes afire with them; and then, at the top, we witnessed an airshow of mating butterflies, either fighting our courting, we couldn't tell. The climb is difficult, up a steep rocky trail, and descending was treacherous, but it was well worth the effort. We were nervous about this particular hike because we would be descending in the dark, but we figured our headlamps would protect us from injury. 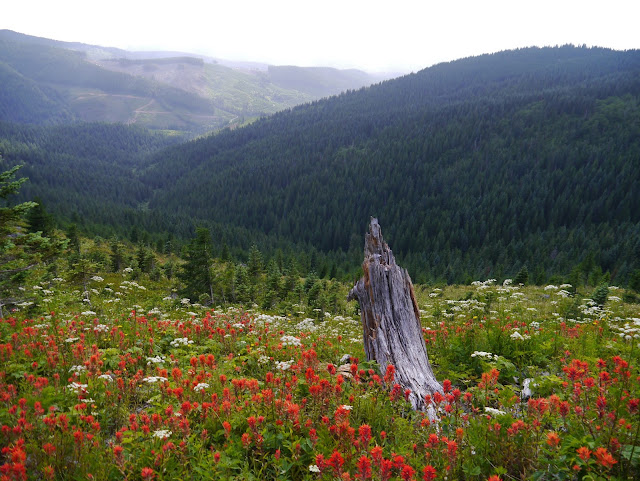 Climbing up into the sunset yesterday, we sadly saw the clouds moving in. The wildflowers were just as spectacular as we remembered, and the views that we got along the trail were still, magnificent, but by the time we got to the summit, the visibility was down to a few hundred feet. 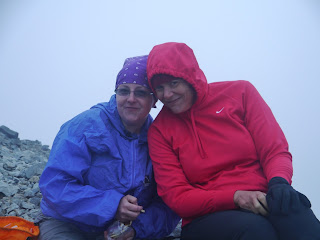 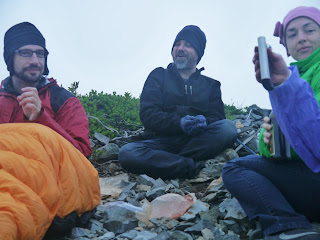 It was cold and windy. Our group stayed at the top for just half an hour before calling it quits and descending, hoping to find the clouds parting at a lower elevation. They did briefly, and we saw some impressive sparkling, but nothing like those who'd done it before had seen. The descent was as dicey as we expected, but we survived with only a few bruises.

The true adventure began in the parking area, where we learned that Scott, who organized the hike, had discovered a broken coolant hose. Everyone dug into backpacks and car trunks, and found enough bits and pieces of gear that Scott was able to MacGyver a repair. We stopped twice more on the way down the mountain as those repairs gave out. Ultimately it took a length of tubing from Scott's Camelback, a Leatherman multi-tool borrowed from Alex, some surgical tape from our first aid kit, and a condom someone had in her purse to cobble the whole thing together. Many also contributed water from their bottles and hydration bladders to the endeavor.

This wasn't just about getting Scott's car off the mountain without an expensive tow. There was some self-interest involved: there were four people in that car, and while we had some room in our own backseat, the other vehicle was full. It would've been possible to cram those four people in, but it would've made for an extremely painful ride home for almost everyone. But that concern was never voiced; we simply worked together to help Scott get his car home. Still, the self-interest issue is always a part of true interdependence, and ought not be ignored.

So there we were, on Independence Day, practicing the very interdependent principle stated so clearly by one of the founders of this stubbornly independent nation: Either we all hang together, or we shall all hang separately.

We hung together, and everyone made it home. And very fittingly, descending that difficult trail in the company of so many other experienced hikers gave us the confidence we need to independently tackle next week's backpacking expedition in the Olympic Mountains.

Too many Americans would rather hang separately than hang together and thrive. It's not just the zombie apocalypse that demands we learn the lessons of interdependence; sometimes it takes a village to fix a coolant hose, and get everyone home from the mountain.
Labels: backpacking fireworks hiking Independence Day interdependence Silver Star Mountain
Location: Silver Star Mountain, Gifford Pinchot National Forest, Washington 98675, USA