Brace yourselves for another descent into the world of Star Trek, specifically, Star Trek V: The Final Frontier. (And if you're wondering what this has to do with Our Olympian Adventure and the huge photograph above, please be patient. I promise it'll all come together nicely in the end.)

Among all the hit-and-miss chapters in the franchise, V stands out for a lot of reasons: the special effects (especially the rear-projection viewscreens) are laughably inept; the dialogue is overtly jokey; the plot is yet another retread of an original series episode, and not even one of the better ones; first- (and only-) time director William Shatner gives himself entirely too many actions scenes that come off at times like self-parodies--and you begin to get the picture.

For all that, there is a philosophical center to this campy B-movie that has left a deeper mark on me than many an Oscar winner. The story is simple: Spock's long-lost half-brother Sybok, a Vulcan heretic who has been cast out because of his embrace of emotions, converts the entire crew of the Enterprise to his insane quest to find God at the center of the galaxy. The God he finds is actually a powerful alien being who wants to use the starship to escape its planetary prison. The alien is destroyed, along with Sybok, the Enterprise escapes, and Kirk, Spock, and McCoy get to complete their camping trip at Yosemite.

The philosophical center I was referring to is not, as you might have suspected, the alien-God-impersonator bit, but the power Sybok exerts over every cast member, whatever his or her race, except for one: he tells each to "Share your pain with me." The result is a kind of intensive mind-meld therapy that frees the subject from whatever burdens have tied her or him down, creating a sense of inner peace. We get a glimpse inside two of these sessions, seeing McCoy remember how he euthanized his father, and Spock remember how his father rejected him at birth with the words, "So...human." Kirk refuses to cooperate, insisting he draws his strength from his pain. This sets him up for Star Trek VI, in which his continuing rage over the death of his son drives the plot of what is arguably one of the best Trek movies.

There are, of course, problems with the simplicity of this device, chiefly this one: Why would inner peace lead every character, without exception, to follow Sybok halfway across the galaxy on his nutty quest for God? Going to a deeper criticism, the idea that all the brokenness of an individual can be boiled down to a single trauma is far too neat and tidy--though an understandable choice for the script of a lightweight action movie that must hit so many genre beats if it is to please its fan base (a goal it failed spectacularly to achieve, so why bother?). If anxiety and depression were that simple, psychologists, psychiatrists, therapists, social workers would all be looking for another line of work.

And yet, there is a truth here, one that I spent hundreds of hours in therapy to discover, and only really figured out on the trail last week, long after I'd applied it to my life: there is a theme to our brokenness. It's not the same theme for everyone (understood in V, as Sybok must have a private session with every individual he heals), and in many cases, there are probably multiple themes at work; but until the central theme is addressed, healing from psychic wounds will, of necessity, be a partial, temporary accomplishment.

In my case, I had a constellation of traumas that had to be addressed on a variety of couches. I dug deep with every therapist, however gifted he or she was. First I explored my perceived lack of fatherly approval. With that nut cracked, I turned to frustrations with my vocation--or, rather, with the questioning of that vocation by a superintendent who never cut me a break in the six years I worked under him. That was set aside while I dealt with my first divorce, then revisited at the time of my second divorce as that career came to an end. Subsequent therapy dealt with both that divorce and the end of the career. Finally came the struggle for custody. Running through it all was the ongoing quest for a loving partner. Somehow, in the days following my final defeat, and leading up to being laid off from teaching, I was able to let go of almost all of this pain.

How did I do that? I didn't realize it at the time, but it came down to what I'm about to share with you about Our Olympian Adventure.

We began planning this trip years ago when a spin instructor took us on an imaginary mountain bike trip to the Enchanted Valley. That became our goal for whenever we would eventually visit the closest National Park to Portland. It drove us to equip ourselves for backpacking, and as we made arrangements for the trip, it was always our target. Even as Joe Baisch told us it was unlikely we could get down to the Enchanted Valley from Anderson Pass, I fostered an unspoken dream of making it happen. I had to give that up when, after just seven miles on the trail, I accepted that our loads were just too heavy to carry beyond our base camp at Dose Forks, and that at that location we were still too far from the Enchanted Valley to pull it off as a day hike. Still, I thought we might glimpse it from Anderson Pass, and held onto that dream all the way up to Honeymoon Meadow, where the thought of fording Icicle Creek and then climbing up a mile and a half of steep switchbacks thwarted that goal, as well. The following day, I again hoped to summit a mountain pass, this time under Mount Constance, but the fierce grade of the trail turned us back miles from our goal.

Earlier in my life, I would've been in a deep funk over not just one, but two days of frustrated goals. But, as I told Amy, something changed in me four and a half years ago, something I was only now able to verbalize: I had finally learned to let go of outcomes.

Look at that laundry list of traumas, and you can boil every one of them down to an outcome: Parental approval. A maturing marriage. Ordination. Custody (and with it, being the "school parent"). A long-term relationship with a loving partner. All the pain I felt came out of the frustration of these goals. Why couldn't I have this, or this, or this, no matter how hard I tried? Why was God continually saying "no" to me? What did the Universe have against me? Perhaps it was all a lie, and there was no good, no love, no order to the Cosmos, and chaos and entropy ran the show. Insomnia, long runs, therapy, hour upon hour upon day upon week spent struggling to understand it all. And really, it came down to outcomes.

That is, of course, an oversimplification. Every one of those outcomes was wrapped up in values I cared fiercely about, and still do. The heart of it all, though, is still the pain of striving for something and not achieving it, of wanting and not having an outcome that mattered to me so deeply that my soul was torn apart, clinging to it long after it should have been clear to me it was unattainable.

Letting go of those outcomes has made an enormous difference in my life. When I think about where I was five years ago, coming apart at the seams with desperate longing for a particular outcome, and compare it to where I am now, I see two different men. I am so much more centered, tranquil, happy, accepting of and enjoying whatever life brings me. Last week I was able to see, really see, so much wonder on the trail, even as it took hours to achieve any of the views that are always my ultimate goal as I hike. And when I could not reach either of the highest goals, I was able to accept that--Dayenu--where we were was enough, that, in fact, we had already seen more wonders than anyone has a right to expect. More than that, I was able to experience Amy's awe at the beauty around us, to allow myself to see it through her eyes. With as much outdoor experience as I have, I am always comparing what I see to my inner photo album, remembering so many other wonders I have seen, and avoiding whenever possible the adjective "most beautiful."

Come to think of it, there are some outcomes that matter very much to me, and chief among them is what I have finally reached: a partner in adventure, a fellow traveler through all the struggles and rewards life brings my way. There's an outcome worth cherishing, that trumps all the little ones that could be frustrating me, but no longer do. Perhaps love really does conquer all.

The photo at the top? Icicle Creek, location of the epiphany I have just shared with you. Enjoy it. 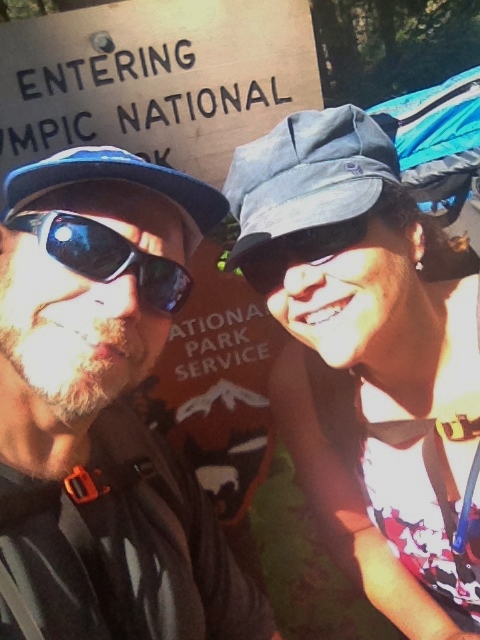