- July 22, 2013
Here's the most spectacular thing I saw in the Olympic National Park last week:﻿ 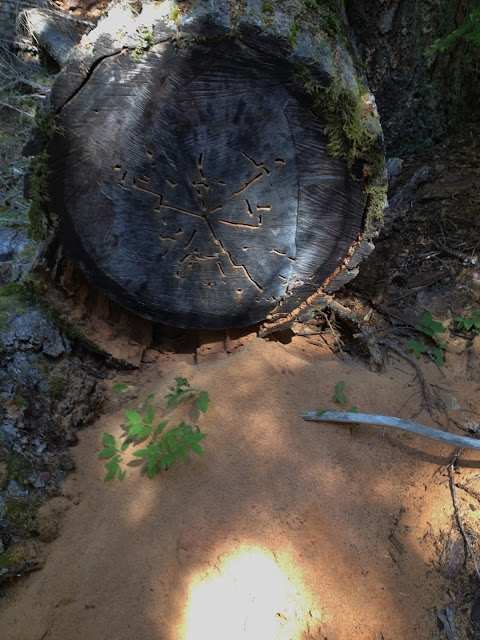 ﻿
"What?" you say, "One of those ubiquitous logs that have been cut away from blocking the trail, and the sawdust left by the chainsaw? You call that spectacular?" Look more closely (and I apologize for the blurriness of this, but it's on full zoom, and the light's not very good under the canopy): 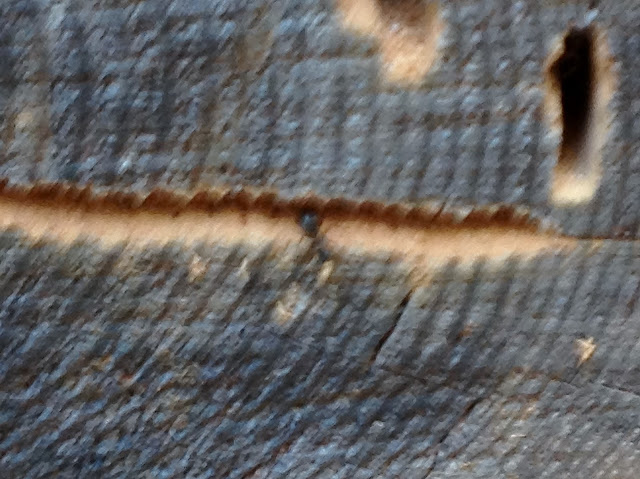 The blob in the middle of this picture is a carpenter ant with a tiny load of sawdust in its mandibles. Here's what makes this spectacular:

We stopped to take a closer look because the design was so interesting that we thought it might be of human origin, and we wondered what it meant. Then we realized there was movement in the sawdust, saw a few ants who apparently had a job-related mishap and wound up in the refuse heap. Finally, we saw movement in the cracks, and saw that every second or two, a half dozen or so ants would appear just long enough to drop their loads, then turn around and go back up the log for more. It's a massive, long-term construction project, converting this log into an ant cathedral. I have no idea how much more remains to be done, how many generations of workers will spend their entire lives traveling back and forth with their tiny loads, what sort of collective genius drives the work; I just know it makes me feel very very small.

Natural miracles like this are happening everywhere in a rain forest. (It could be argued that the eastern side of the Olympics doesn't quite qualify as rain forest, catching less precipitation than the windward side, but it's hardly a desert.) Every standing tree is home to multitudes of small creatures, from microbes to insects to small birds and mammals to hawks and eagles until the damage they do to its structure, combined with the relentless erosion of wind and rain, brings it crashing to the forest floor, taking other trees with it if it's large enough. Every fallen tree, whether or not it's had a trail-blocking section cut away by rangers, now becomes raw material for massive ant construction projects. As the wood becomes softer, other creatures burrow into it. Moss and lichen transform its upper layers into humus, and plants begin to grow. Gradually it sinks into the forest floor until there is nothing left to show it existed save a log-shaped rise in the carpet. Here's a picture from the national forest web site of a nursery log in the Hoh rain forest, a hundred miles from where we were hiking:

I first learned about nursery logs during a ranger-led nature hike I took when I was 23. The ranger referred to them as "mother logs," but the concept was the same. I'd never thought about it before, how an old growth tree's life cycle extends far past its apparent death. Depending on the tree's species, it can take from 50-300 years for it to vanish into the soil. In the meantime, it continues providing shelter and sustenance for countless other life forms. In the case of an old growth Douglas Fir, this means its full life cycle, from germination to finally vanishing into the forest carpet, may be as long as 1300 years.

Hiking through a forest in the Pacific Northwest, one is always in the presence of these ancient giants at every stage of their existence. And yet, for most of my life I've resented them for blocking my view. Until I saw the ants chipping away at their new home, turning it into an architectural wonder that no human will ever be able to appreciate, creating a pile of sawdust that must have taken years to accumulate. Nature, I realized then, is patiently inexorable. It will have its way.

That night, we had a campfire using scrap wood, limbs and young trees that had fallen in our camp site. As I prepared to throw a small log on the fire, I paused to count its rings. I stopped at 50: this pre-pubescent tree was older than I am when it was brought down by the fall of a much larger cousin. I'm solidly middle aged now, less than two decades from retirement; this scrap wood I was so casually burning got its start before I was born.

When I was 21, I had an epiphany from reading a book on galaxies. It took me on a tour that traveled outward from our solar system to star clusters to arms of the Milky Way to the galaxy itself to clusters of galaxies to clusters of clusters until I had a shattering realization of how inconsequential is a single human life against that cosmic scale. Last week, at the age of 52, I had a similar epiphany. This time it was brought on by an ant.