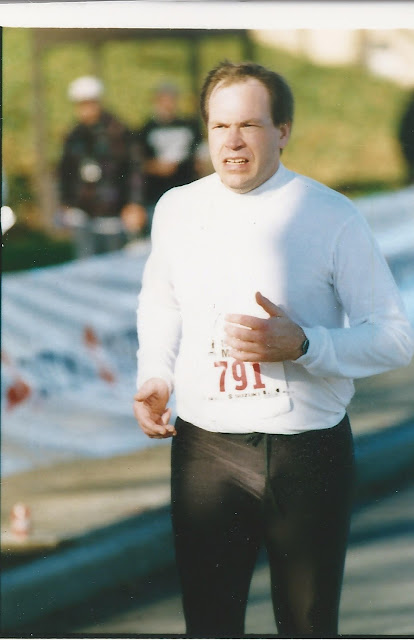 It's a misty morning in November, 1999, and I'm approaching the finish line of the Seattle Marathon. I've been running for nearly five hours, my slowest time ever for this distance. I'm 38 years old, with a receding hairline, a trick ankle, and plantar fasciitis, and my world is slowly turning itself upside down. My second marriage ended four months ago. On the drive home from this race, I will call a woman I've been seeing in Olympia, hoping to drop in, only to be told it's over between us. In two weeks, I will be in a major accident, nearly totaling the new car I can't really afford anyway. And in two months, the United Methodist Church where I am associate pastor will move heaven and earth to get me out.

So why am I doing this to myself? With all the things happening over which I have no control, why am I willingly putting my body through one of the toughest ordeals in amateur athletics? Am I nuts?

Kind of, but not really. My pre-race ritual involves some light carbo-loading at 5 a.m. (Pop-Tarts work well, lots of easily-digested calories), washed down with a single cup of coffee, packing up everything in my hotel room, putting duct tape on my nipples, pulling on my race clothing, pinning on my number, driving to the stadium where the race will begin, carefully measuring how much I drink before the race, making one last trip to the port-a-potty, lining up at the proper area for my anticipated race time, checking my watch to be sure the chronometer is ready to go, looking around at my fellow runners, muttering "What a bunch of crazy people," waiting anxiously for the gun to go off, then for my group to start moving, and it begins. It really is a crazy thing, hundreds or thousands of people spreading out over a 26.2 mile course engaging in hours of repetitive exercise that brings them back to where they started; and yet, for me, it is the sanest thing in my insane world.

It's sane because I am electing to do it, and in the preparation for it, am engaging in an activity that is inherently sanity-inducing. Running, in the days before I acquire my first iPod, is for me a silent, solitary exercise, movement meditation, the rhythm of my feet and my breathing providing an ostinato over which my brain riffs on reminiscences, resentments, tangents, insights, all of them distractions from the growing fatigue and discomfort in my legs and feet, until I can ignore the pain no longer, and must take up residence within it, experiencing it, exploring it, bargaining with it, promising myself if I can just hold on to the next relief station I'll give it an extra ten seconds of walking while I slam down a cup of Gatorade, but then it's back to running, thinking, groaning, bargaining, badgering my body through another mile to the next walking break and Gatorade gulp.

Running these races, I learn to discipline my mind. Marathoning is rehearsal for trauma. In 2000, it will be the trauma of involuntary singleness, an "incapacity" leave from ministry that will become a permanent career change, and putting my son on an insane diet that will liberate him from the psychoactive drugs that have not been managing his epilepsy. When I run my 2000 Portland Marathon, I will be so in love with the race that I will increase the frequency of my marathons from annually to semi-annually--only to have my body finally veto this voluntary torture with a stress fracture. And then, the discipline I have learned will help me with the transition away from the activity from which I learned it.

Extreme endurance sports make enormous demands on the body, which in turn require intense mental focus. Finishing such an event is a phenomenal accomplishment; if it were not, race fields would consist solely of elite athletes, and they would be over in a fraction of the time required by all-comer events. But in fact, completing such events exerts a powerful draw on amateur athletes, those who run, bicycle, swim, ski for health and recreation. It's fitting that every finisher receives a token of accomplishment, usually a medal, proclaiming him or her a successful athlete who has won the inner game, the competition with fatigue, doubt, and self-judgment. To know that one can survive these things--running a marathon, climbing a mountain, swimming a channel--is to know that whatever obstacles life may send, these, too, can be overcome.

There is an essential quality necessary to achieve extreme physical goals: grit. Grit is the stubborn perseverance that has kept me from giving up on myself, long after others I've been in personal or professional relationships with have given up on me. Grit got me through my first career transition, from teaching into ministry. Grit got me through far too many moves across borders and oceans. Grit carried me through my son's birth trauma. Grit helped me survive two divorces. Grit enabled me to transcend my second career transition, back into teaching, and, later, the loss of the work I now loved as economic hardships brought down school budgets. Grit makes it possible for me to take on new endurance goals, goals I would never have considered in my youth: backpacking, mountain climbing, Nordic skiing, cycling a century. I will not run a marathon again, but grit does have me back on the road twice a week, powering up hills in minimalist trainers. And grit has been lifting weights, working my body into the best overall shape it's ever been in--at the age of 52.

I wasn't born with this grit. I've learned it the hard way. It has to be that way. There's no easy way to acquire this quality, because it is learned through suffering. Those who back away from doing hard or frightening things will never possess grit. Fears must be faced and plunged into. There is likely to be a great deal of weeping and wailing and begging for relief, and the training process is nightmarish; but then the next time life throws me a curve, I'm far less likely to be beaned, and more likely to knock it out of the park. And every ordeal endured gains me more grit points, more resolve, more strength to face the next.

This is not an easy lesson to learn. It does boil down to a cliché: that which does not kill me does, indeed, make me stronger. I'm stronger from my ordeals because I survived them, and I can look back and say to myself: Yes, that was hard, but it's over, and I'm still here.

So bring it on, world. I'm ready for whatever you've got.
endurance extreme sports grit marathon perseverance
Location: Portland, OR, USA