Our Olympic Adventure, Part II: In Search of a View

I grew up a short drive from God's country, and I never knew it.

I've had more moves in my 52 years than I can count. Last night at ComedySportz, I was doing a quick calculation in my head about how many addresses I've had because I need a new trivia item for the pre-show slides (due to AT&T's lack of coverage in the Olympic wilderness, my New York Times daily crossword streak ended Monday at 987), and I came up with 30. That's just addresses, by the way: it doesn't include how many times I moved everything I had from one location to another while keeping the same post office box. By the time I entered college, I'd lived in seven houses and, very briefly, one apartment, located in five different states. Family vacations took me to and through some of the most spectacular scenery in the United States and Canada.

We drove through the White Mountains of New Hampshire, up the coast of Nova Scotia, through the Badlands of the Dakotas, the Grand Tetons of Wyoming, the redwoods of California, the rugged Oregon coast, the Sawtooth Mountains of Idaho, up Mount Rainier in Washington, through the Columbia River Gorge, hour upon day upon week upon month of enough scenery to fill volumes of Woody Guthrie songs.

And I missed almost all of it.

My nose was always buried in a book while the car was moving, until motion sickness forced me to look at the scenery, at which point I just wanted it to stop moving. I had no interest in the incredible beauty around me. Mind you, I was often facing backward through these wonder, in what we called the back back seat of the station wagon, a sheltie panting beside me, as we crawled up narrow gravel roads clinging to the side of bare mountains, a travel trailer rocking back and forth behind us, exhaust fumes pouring through the rear window that had to be kept open because our 1968 Ford Fairlane lacked air conditioning, inches from a precipitous drop to our deaths, no guard rail in sight. The only thing that kept me from contemplating certain death was the books I took with me on every vacation. I had no appreciation for the cloudless mountainscape spread out below. I just wanted to get to the campground--where I would now ignore the beauty of a mountain lake, continuing to focus on my reading.

I was twenty before I looked out the window of the family car, somewhere on the Sunset Highway heading to Seaside, and realized how much beauty I'd been missing. Once I did, I had a lot of lost time to make up. I became a view junky, obsessed first with driving to and, once I discovered the joy of outdoor exercise, running, hiking, cycling, snowshoeing, and skiing up to viewpoints that I would capture on film or flash memory. Climbing mountain trails, I pause at every semblance of a viewpoint, composing and photographing the same scenery from slightly different perspectives, on a quest for the most beautiful shot, the picture that is both so breathtaking and so unique that I will happily splurge on a poster-sized print of it to hang in the living room.

Now that you've got the context, let's take a look at some very pretty pictures I took on our third day in the Olympic wilderness: 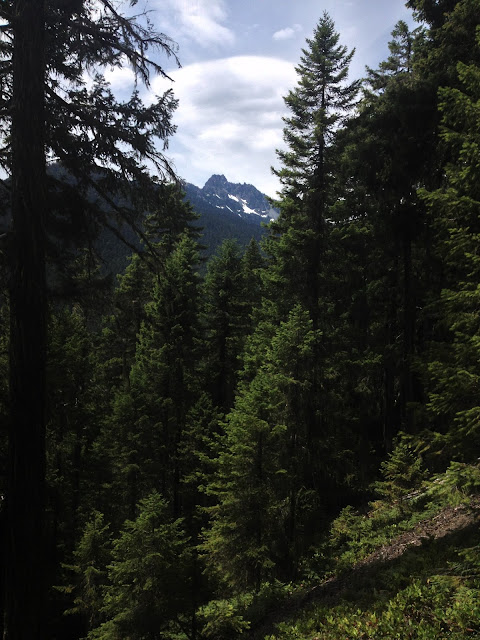 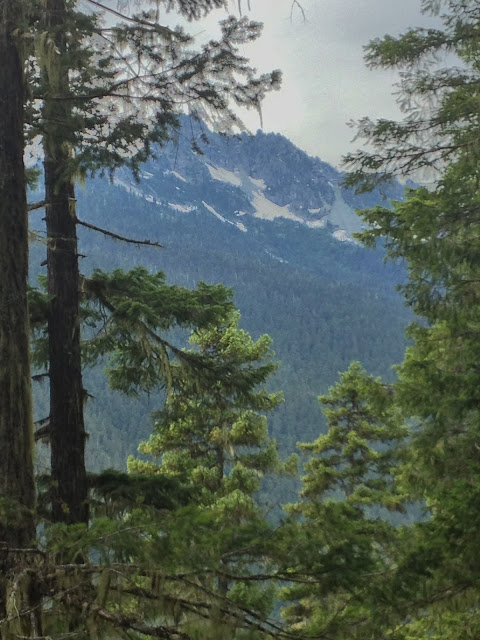 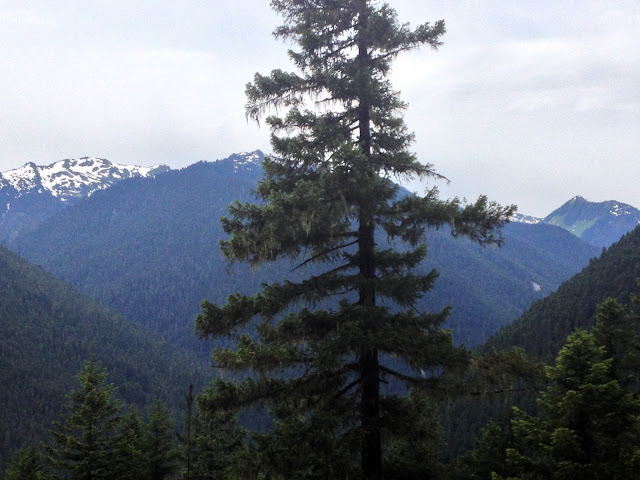 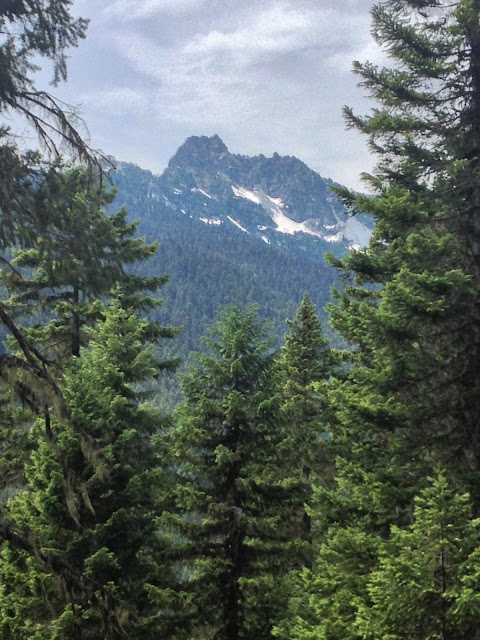 Can you see what they all have in common? No, it's not the mountains; in fact, the horizontal shot is of a different mountain than the other three.

All four of these views are partially obstructed by the forest.

On the second day of the trip, we had climbed (see Part I of this series) to Honeymoon Meadow, calling an end to our day hike when confronted with an icy creek we would have to ford to reach Anderson Pass. We had wonderful views of Mt. Anderson, but never from a high vantage point. Back at Dose Forks, footsore, sweaty, and tired from our 15.4 miles of hiking, we pulled out the map and looked at how far we would have to go to reach Constance Pass, to the northeast of our base camp: 6.1 miles, for a total out-and-back of 12.2. That seemed eminently doable, and after breakfast, we were off.

I was excited at the prospect of climbing to a different alpine meadow, and on up to a pass with a sweeping view, I hoped, of the entire Olympic Range. The first mile was lovely and fascinating as we hiked through a variety of forest environments reminiscent of the Wildwood Trail in Forest Park--but with none of the industrial harbor sounds that usual intrude on that urban hike. Then the switchbacks began. We knew we would be climbing--we were aiming for a pass, after all, and from the topo lines on the map, we knew it would be nearly constant--but we hadn't bargained on how steep it would be. We quickly climbed up out of the river ecosystem, leaving our mother the Dosewallips behind. The switchbacks piled up on each other, and our pace slowed. Finally we rounded the last of them, and began climbing up the ridge itself. Now the trail became steeper, drier, and spots of gravel caused our feet to slip. We passed 3500 feet--demarcated by a sign reminding us there were to be no wood fires past this point--meaning we'd already climbed 1800 feet. By my estimation, we climbed another thousand before we met the only other hiker we were to see that day, a young man on his way down, doing a complete transit of the park in, he told us, a mere five days. We asked him how far we were from Constance Meadow, where we hoped to eat lunch before the final assault on the pass. "One mile, maybe two," he said. "All uphill like this?" I asked. "Yup." "Do the views get any better?" "Not really--though the transition from trees to meadow is nice." We thanked him, and kept climbing. For ten more minutes.

It's hard to call a hike off short of a goal. It means admitting to oneself that the goal is unattainable. Neither of us takes on goals lightly. We are not quitters. When I was running marathons, I know I endangered my health running well past the point of dehydration (or, in at least one case, hyponatremia), believing at least in part that failing to finish the race would be a fate worse than death. I stayed in ministry long past my "best by" date because, no matter how obvious the signs that I was not suited for that vocation, I was not about to abandon something I'd worked so hard to achieve. Amy does not take quitting any more lightly than I do. Turning around on this trail at such an arbitrary point felt cowardly. And yet, coming back down, we were frequently scrambling: the true steepness of a trail can only be known on the descent. We both slipped multiple times. It was a relief to find ourselves on the switchbacks again.

I took what pictures I could of what views we had, but none could hold a candle to the imagined view we might have had at the pass. We were both full of self-recrimination, Amy for not being able to reach the top, me for putting us on an evening tougher day hike that we'd had the day before. We were both apologizing to each other for much of the descent, and the next day, as we packed up and began hiking out of the park, this theme continued.

And then, at the boarded-up ranger station in the ghost campground at what used to be the trailhead, before it was pushed 5.5 miles further down the road by a washout, we ran into a 69-year-old hiker who was camping there who was in a talkative mood. He worked at a sporting goods store in Port Angeles, he said. When we told him about the young man on the Constance Pass trail, he knew exactly who he was: he'd sold him maps just a few days earlier. And yes, he said, this was a super athlete, an ultra-hiker, incredibly fit, covering easily twenty miles in a day with his full pack.

Just like that, we felt better. It was, indeed, a hard climb, and it was amazing that we got as far as we did. We probably climbed between 2500 and 3000 feet in about two hours--and still had 2000 to go when we turned around. I don't know if we had it in us to do that, but I do know the trip back down from the top would've been far uglier, and we might very well have injured ourselves badly.

So we didn't get our view--at least, not the unobstructed one. But here's the thing about views: take a look at those pictures, and you'll see that the mountains are framed by a lush old growth forest. Those trees are, themselves, spectacular. We burned some scrap wood in our campfire that night, and looking at the rings in one of those logs, I estimated we were burning fuel that was older than I was. All around us were signs of the cycle of life, old trees falling to become mother logs, slowly sinking into the humus, birthing new trees. And here we were, four years into our life together, a tiny blip on the scale of all this magnificence.

Thinking about all this, I feel very small--and blessed to be a mote in this river of life. The real view, the view I've been seeking, is of my place in all this, our place as a couple in the sweep of human life, and as I look at it, I realize I've obstructed that view with all sorts of detritus, goals and plans and hopes and dreams that are nothing next to the incredible complexity of the life cycle of a tree. The long view of that hike is laden with symbolism too obvious for me to write here, except for this:

However long our journey, however wondrous the views we will share, however difficult the ascent, however treacherous the descent, I count myself truly blessed to share it with this woman. 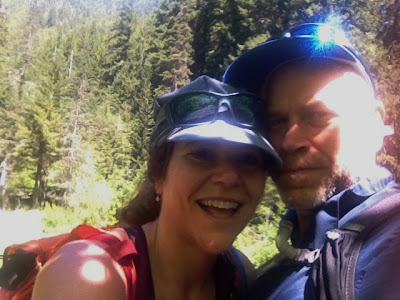