In Praise of Slovenliness 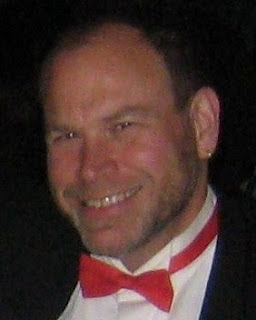 I know what you're thinking: "Why on earth is he beginning an essay on the joys of casual dress with a shot of himself in a tuxedo?" I could be wrong about what you're thinking; it might, in fact, be "My, what a handsome fellow." Or perhaps it's a combination of the two. Maybe you don't find me even remotely attractive. Maybe my shorty-cropped beard and earring are, in your mind, clashing with the tux. Maybe I should just give up trying to read your mind.

In fact, the picture proves a point I shall be making throughout this essay: there is a time and place for formal dress. In fact, there are times and places for every degree of sartorial sophistication, from to-the-nines to birthday suit. But I get ahead of myself.

This post was occasioned by a piece on Slate by film critic Dana Stevens, later expanded upon in the Slate Culture Gabfest podcast. Ms. Stevens, who goes to great extremes in her day job to present as fair and balanced an approach to film criticism as I have ever seen, possesses none of that equanimity when it comes to footwear. Specifically, she gives two big thumbs down to flip flops. Mind you, she thinks there are times and places for these minimalist sandals, but they really boil down to times and places when she's not around. She hates the "fwap fwap fwap" sound they make, their uselessness in situations requiring either backward-walking or running, their lack of arch support, and the way they expose feet to all the ickiness to be found on the sidewalks of New York. She also appears to have an anti-fetishistic distaste for those parts of the foot not normally exposed by other types of sandals, specifically the heel and arch. Most of all, flip flops speak to her of a creeping casualness of wear that offends her New York sensibilities. Go ahead and wear them in small towns, she says, but keep them off our high class urban walkways.

I felt my blood begin to simmer as I read this piece, becoming more and more astounded at just how closed a mind this writer has toward footwear I spend much of the year longing for. I have a pair of ten-year-old flip flops: 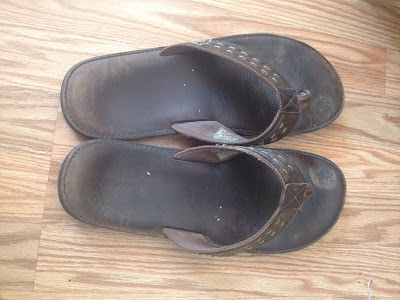 As you can see, these shoes have conformed themselves to the shape of my feet, in much the same way a podiatrist makes orthotics. I've worn them a lot. I don't wear them on long walks--Tevas are better for that--but if it's ten minutes or less away, and the weather is shorts-worthy (which, for an Oregonian, means anything over 60), these babies are on. Please note that I mentioned shorts. If I'm in jeans or khakis and barefoot (as I usually am around the house) and need to check the mail, flip flops come in very handy.

So I'm sensitive to the idea that taking long walks in flip flops is not good foot therapy, but please note that I'm no longer sold on the notion that the foot must be armored against its normal gait with heavily cushioned soles and arch supports. I bought the podiatric/footwear industry line on such shoes for twenty years, spending thousands of dollars on motion control shoes and orthotics, yet still suffering frequent flare-ups of plantar fasciitis. Only when I switched to shoes far uglier than the flip flops Dana Stevens hates did my arches relax:

I don't wear these shoes while running anymore--I switched a few months ago to some minimalist trainers with a 4mm heel lift--but I wear them to the gym, and once finished with my workout, to Fred Meyer, the QFC, Great Clips, Powell's Books, lunch, coffee, whatever else may lie between me and home. And yes, I'm still wearing my athletic clothes while running these ugly shoe errands, typically shorts and a sleeveless tee; during the winter, a sweat shirt over the top.
But here's the thing, Dana Stevens and any other Style Snobs who may be reading this: I don't live in Manhattan. I live in Portland, Oregon, which may very well be the least formally clothed city in the United States. (I don't have data to back that up, so please feel free to object, but I want research backing up your opinion!) Many in the stores I visit after a workout are similarly dressed down. It's rare to see a fellow shopper who looks ready for a day at the office, let alone a night at the opera (though concerts in Portland are, like everything else, shockingly informal affairs). Forget casual Friday; khakis and sneakers are de rigeur in the workplace. I'm a public school teacher, and it's been years since I saw a tie at work--and the last time I did was during my year at the Catholic school. Don't expect to see suits in church, either; Sunday best means a clean polo shirt. Portlanders are casual people.
But what about that "time and place" thing? you may be asking (and yes, that's rhetorical, as opposed to me knowing what you're thinking). If even going to the symphony doesn't mean dressing up, when exactly does one do so?
This is where my other jobs come into play. I'm a performer, as well as an educator. When I'm conducting my band or choir in a concert or festival, I go the whole nine yards: white shirt, cuff links, black dress shoes, tux, black tie. The same applies to when I'm playing the piano for Soho Smooth, the comedy lounge act I co-founded with my partner Amy Milshtein and our friend Mike Jenkins. When I play at ComedySportz, I wear my uniform jersey: 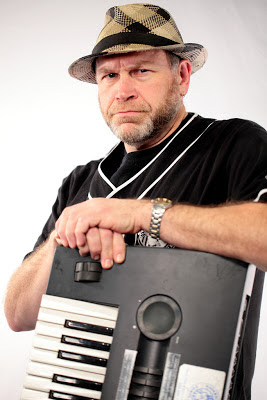 Of course, it's topped with a straw fedora (felt during the winter), my signature accessory, setting me apart from the rest of the cast and either giving my appearance a touch of cool jazziness or, if you feel about hats the way some people feel about flip flops, turning you off. (Icky sweaty things that never get cleaned, and make your hair look really weird when they come off!)
I make a distinction at school, too, usually dressing more neatly than any other male staff member (including the principal), and on most days, wearing walking shoes that could pass for oxfords. I dress similarly for my piano-playing gig at church, adding a musically-themed tie for special occasions. And I will always put on a tie for a symphony concert, sometimes a sport coat as well, even though it means outdressing most of my fellow audience members. Portland it may be, but I've still got some old school ideas about putting out just a little effort to dress up the occasion. Same goes for weddings and funerals.
My bottom line for all of this, though, is the give-and-take tug o' war between etiquette and judgment. Long ago, I was told that etiquette is the art of putting others at ease. Thus, intentionally doing something I know will offend others makes me a rude, uncaring person. With that said, the flip side of etiquette is eschewing judgment. The moment I judge the dress, mannerisms, or actions of another, I am, again, a rude person more concerned with my own feelings than those of the other. I put you more at ease when I dress appropriately; if you're dressed inappropriately, I put you more at ease when I just accept that that's the way you dress.
This bilateral code of etiquette doesn't solve every situation, and it comes up against the rebellious libertarianism of youth culture: they wear what they like, and what they really like is making adults uncomfortable. I had problems with this even when I was a youth, rebelling in my own way against the norms being imposed on me by my peers: I rebelled by dressing non-rebelliously. Some of that stuck with me, though, and I have always been offended by people who turn a withering eye on fashion offenses. Deep down, I believe people should be able to wear clothing that is comfortable, functional, and which they find pleasing to their own eyes when they look in the mirror. For me, during the summer, that is typically a t-shirt, shorts, and flip flops.
If I were working in an office, fwap fwapping about in my flip flops, I might very well raise the hackles of a flip flop hater like Dana Stevens, and that could give me pause. So, however, would the odor that quickly accumulates in my Tevas. I resist the urge to tell her to just get over it, though, because I have my own quirky set of auditory annoyances: loud consumption of celery, popcorn, apples, anything that goes "crunch" when bitten into; the whine, roar, and drone of yardwork equipment; incessantly barking dogs; TV sitcom laugh tracks--it's a long list. So who am I to judge Dana Stevens for feeling judgy, and having the guts to write about it?
Which is where this essay will now end: rather than write myself into a Gordian knot of paradoxical judgmentalism of judgmental people, I will slip on my flip flops and step outside. It's far too lovely a day to spend another minute of it at the computer.﻿
﻿
Labels: ComedySportZ etiquette fashion flip flops judgmentalism sandals shorts Soho Smooth summer
Location: Portland, OR, USA