Proof Is the Bottom Line 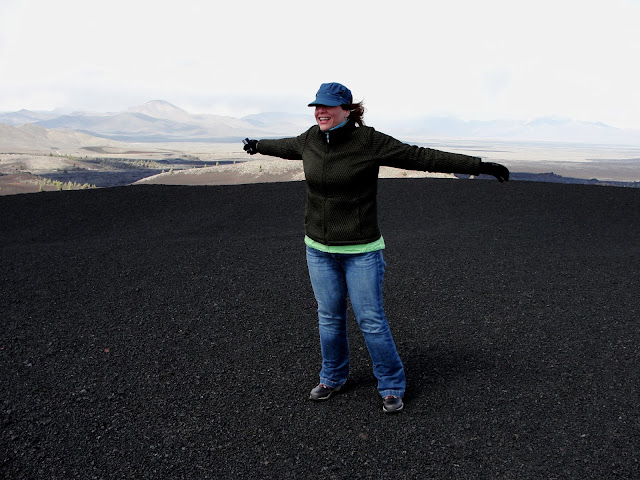 Faith is an island in the setting sun...proof is the bottom line for everyone. --Paul Simon, "Proof"

In the past four years, Amy has seen, touched, heard, felt so many things she never knew were real. And so have I.

There are things in heaven and earth that can only be dreamt of until they are experienced firsthand. Images, recordings, descriptions, artifacts can only hint at the thing in its fullness. Even once in its presence, one must be open to it, receptive to its essence, for it to permeate one's perception and alter one's being.

I first visited the Craters of the Moon National Monument in 1970. I was nine years old. I found much to appreciate about it, but only at a superficial level. We passed through this volcanic blast zone many times during our years in Idaho. It was convenient and cheap, two essential criteria for us in our perpetually strapped condition. I quickly tired of it; it was not, after all, really the moon, but something wholly other, something earthbound, geologically explicable, even mundane. I've been back several times as an adult, but it was only two years ago, taking Amy there for the first time, that I really felt the power of the place. The difference? I was experiencing it through her skin.

Whether or not you're a Christian, you've probably heard the expression "doubting Thomas." It comes from the Gospel of John. After the crucifixion, the disciples are huddled in a locked room, fearful of being arrested and put to death, when the resurrected Jesus appears to them. Thomas is not there with them, but rather is off doing his own thing, blending with the crowds, moving on with his life. Some of the disciples run into him in the street and tell him what they saw. He refuses to believe it, insisting that until he has the proof of seeing Jesus for himself, of touching the holes in his hands and putting his own hand inside the gash in Jesus' side, he will remain a skeptic. A few days later, he's come to meeting with the others, the doors are locked, and again Jesus makes an appearance. He holds out his hands to Thomas, tells him to touch and believe, but Thomas now has all the proof he needs and falls to his knees. Jesus chides him for his doubt: “Have you believed because you have seen me? Blessed are those who have not seen and yet have come to believe.” (John 20:29)

For most of my life, I felt rebuked by this passage. I was a doubter, a skeptic, an agnostic who just couldn't make the leap of faith necessary to enter into the full joy of a personal relationship with Jesus. Seeing the many examples around me of deep devotion didn't help. My grandmother was, by all accounts, a true saint, possessed of a quiet faith that was more than enough to carry her through times of great difficulty. As an adolescent and young adult, I did not know many my age who had such faith; those who claimed to tended to be rather insufferable, and I didn't care to befriend them. But as a pastor, I did encounter devout believers, persons who possessed a quiet confidence in the goodness of God and the truth of God's promises. I coveted their faith, and in comparing it to my own, came up far short of the ideal.

The day after my son Sean was born, my wife and I were sitting in our dining room, in shock at what we had just been through. We had had to come home without our baby, and there was no guarantee that we would ever be able to bring him home. The outlook was bleak. Our last sight of him was of a maze of IVs and cables attached to his tiny body. We had not been allowed to touch him, as any stimulus could cause his fetal pathways to reopen, shunting blood around his lungs once more, sending him back into status seizure. We sat at the dining table, our fear and anxiety so great we could barely move.

It must have been too much for others to take. My family had hurried down to be with us. Now they were going out on errands, but seeing us in our agony, one of them said, "Where's your faith? You're ministers!"

Oh, how I wanted faith to bear me up through that crisis. I wanted desperately for a still small voice to speak within me, to assure me that, one way or another, everything would be all right. I never got it. The only voice of reassurance was the neonatologist assigned to Sean, who always presented things in as balanced a fashion as she could, making sure we were aware of the likelihood of all the "heroic measures" being taken proving inadequate, of at some point having to make the decision to stop; and at the same time, telling us how Sean's body was, one tiny step at a time, beating those odds. There were many other doctors who spoke with us, and every one of them was pessimistic about his chances. Only this one offered a slim lifeline of hope, and we clung to it. It was enough to keep us alive, but just; we just didn't have it in us to present a cheerful face to the world around us.

Sean kept defying the odds, and came home after two weeks. His brain had been injured by the trauma, though, and he had a hard time remembering things. At four, he began having seizures, setting us on another, much longer gantlet of neurologists, culminating in a new old trick called the ketogenic diet when he was eight. This got him off drugs, and after three years of carefully measuring everything and balancing every gram that entered his mouth, he was weaned off the diet. His brain had taught itself not to seize. He still had occasional petit mal seizures, but those faded as he grew into adulthood, and he has not had to take anything stronger than a migraine medication since he started the diet.

So was this the proof I needed to give me the faith that could move mountains or, barring that, get me through a crisis? No. In the intervening years, I'd gone through two divorces and had my career in ministry come to an end. Now I was working my way back into music education. There was a steep learning curve, and I often came home spent. Then came more struggles with United Methodism, as it separated me from my children, then unceremoniously dumped me from a choir directing job. A broken engagement, a failed lawsuit to win custody of my son, and finally being laid off from teaching music were an entire bundle of last straws. What faith I had had long since run out of proof.

And then I met Amy. And ComedySportz. And Amy's kids. And I began putting my life back together, rebuilding it from the ground up, crafting a new reality of health and happiness. With Amy beside me, I climbed a glaciated mountain. With Amy beside me, I explored New York City. With Amy and her kids and my son, I explored Seattle. Through ComedySportz, I began expanding my improvisational palate, shifting my focus as a performer to pure, unadulterated creativity. I began playing for a United Church of Christ, creating spontaneous fantasias on hymn tunes that inspired even the dry husk that remained of what little faith I'd ever had. I hiked, skied, snowshoed, biked. Now I am backpacking, something I always wanted to do but needed a partner for--and Amy fills that bill admirably. With Amy and two others, I hiked the entire Wildwood Trail in a day, 31 miles of rolling terrain. With Amy I will, in a few days, venture into the Olympic National Forest, carrying all we need to survive on our backs.

As we are moving through these wonderlands, whether in the Gorge, Utah, the Cascades, the Olympics, or wherever else we will put boots to trail, I find my soul expanding. My senses are flooded with proof: a cool breeze on a hot ride, a bird call toward the end of a long hike, my nostrils awash in the smell of new-mown hay as I run past a field. I am vitally alive, fully present, precisely in tune with the cosmos, vibrating in tune with the song of Creation. And I have faith: faith that the world will continue to rotate and revolve, that the seasons will continue to cycle, that leaves will bud, grow, transition from green to gold and orange and red, fill the air with color as they break free of their branches, making way for a winter coat of lichen, and then the process will begin anew. I have faith that all around me will continue in the process that is ever creating and recreating each present moment. And it is enough.

When I think about the pillars of faith I have known, what is most striking to me is their age: they have all been elderly. They possess the faith of experience, of knowing that, no matter what happens, tomorrow is another day. They know that healing takes time to work its magic, but it works; and when it doesn't work, they can accept that all things come to an end, and even as they do, the world will keep on turning. And it is enough.

I'm not old yet; in fact, I feel younger now than I did as a teenager, unburdened by the angst that haunted me then. I am still trying new things, and delighting in their outcomes. But I do believe I'm coming into the quiet faith shown me by so many of my elders, a faith grounded in the proof, not of miraculous stigmata, but of a lifetime of sunrises. It is, as Paul Simon sang twenty-three years ago, an island in the setting sun. And it is enough.
Labels: agnostic doubt faith nature outdoors proof is the bottom line skeptic trauma
Location: Portland, OR, USA