Yeah. It Was Scary.

I called it my single parenting midterm: leave after church on a March Sunday in 1996, drive halfway, spend the night in a hotel, then drive the rest of the way the next day to camp in the Disneyland campground. The following day--Tuesday--we'd have early admission at the park by virtue of staying at an official Disney facility. We'd make the most of it, riding everything appropriate to two small children and their still divorce-shell-shocked father (the papers had only been signed six months earlier), until the park closed at dusk. The following day, we'd drive to Yosemite National Park, spend the night in a cabin, then tour the park for a day. The day after that, we'd drive all the way home. Along the way, we ate many of our meals out of a cooler. This was Spring Break on the cheap. And I mostly pulled it off.

It was a simpler time in many ways. Sean and Sarah were 3 and 6, respectively. Their main concern in the car was who got to ride in the front seat next to me. (See? Simpler time. Also no air bags in my 1985 Honda Accord.) They were generally good sports about meals, so long as they got them on schedule. There was far less bickering than their would be on later trips. There was a lot less to Disneyland then: ground had not yet been broken on the park-doubling California Adventure, and, as I said, we were able to camp across the street from the main entrance. The campground, and the strawberry field that was next to it, are long gone to make way for more retail and lodging. And the park is open late year-round, not just during the summer.

We got in early, and went straight to the attraction that was of most interest to us: the recently opened Indiana Jones ride. There we learned, to our chagrin, that Sean was a few inches to small. Instead, we hit It's a Small World, which they enjoyed just fine, and Pirates of the Caribbean, which they thought was exceptionally cool. After that it was Toon Town, a recently-opened portion of the park dedicated to small children. Their favorite part of it was Goofy's bouncy house, but there we had our first inkling of the health maze Sean would eventually take us through: he had a spontaneous nosebleed that could not be stanched. (The following summer, he began to have seizures, though he was not diagnosed with epilepsy until well into 1997.) Eventually it stopped, and we continued with our day, though I had a sense of foreboding that did not begin to leave me until he came off the ketogenic diet in 2003.

At lunch time, following the advice of a guide book I had purchased for this trip, we headed back to the campsite for lunch and naps. They didn't really sleep, but the break seemed a good idea. Then we played in the campground pool, where they would've been happy for the rest of the afternoon. I, however, had purchased our one-day tickets, and with the park closing at sunset, we were running out of time. Finally I was able to corral them into getting dressed and returning to the park. Lines were longer now, but we still managed to ride several attractions, including the Thunder Mountain roller coaster. They enjoyed this, and it emboldened me to get in line for Space Mountain. The sun was setting, but I knew they'd let everyone in the line complete this one last ride, so it seemed a good way to gain extra value from our expensive tickets.

I had only been to Disneyland once before, in 1982, when I was attending a Model UN conference at the Anaheim Marriot. I remembered the cars on the Space Mountain ride being like bobsleds, holding three people who sat in each others' laps. I knew it was a fast, loud roller coaster ride, but I figured we'd be fine with that configuration. Sean was, surprisingly, tall enough for this ride. The line was long, and went around many corners, doubling on itself in ways that disguised its length. By the time we finally made it to the boarding area, the kids were fidgety, and as we came around the last corner, I realized what a terrible mistake I had made: the bobsled cars had been replaced with more standard roller coaster cars, rows of just two seats. It got worse when it was finally our turn to board: we were at the front of the train. After waiting nearly 45 minutes in line, I wasn't about to abort. I had to make a snap decision about whether to let either child ride alone while I rode with the other, and if not, whether to sit in front of or behind them. I put them in the front. There was no one beside me as I took my seat behind them.

As the cars made their noisy, clattering climb up the first rise, with music blasting in my ears from the speakers in my headrest, I knew I had made a terrible mistake.

Space Mountain is a fast ride through a dark building. Stars, planets, and galaxies are projected on surfaces, but the main impression is of moving rapidly, being disoriented by the music blasting in one's ears, and having no idea what comes next. I couldn't hear anything coming from the seats in front of me, which meant that the only voice I heard was that echoing in my head: "You are the worst parent in the world. You have totally failed this test as a single parent. Why didn't you call it off when you saw the cars? What the hell is wrong with you?"

It's not really a long ride, but terrified as I was at what it was doing to my children, it seemed to take forever. Finally the train ground to a halt, the harnesses released, and I leapt from the car, pulling Sean and Sarah from theirs. Sean seemed to have taken it all in stride, but Sarah was sobbing. I carried her out the exit, and sat down on the first bench I could find. Over and over, she kept saying, "Why did we have to go on that? It ruined the vacation!" I comforted her as best I could: "It's over, sweetheart. It was just a ride, and it's over." I looked over at Sean, who had placed a comforting hand on Sarah's arm, and I said with perfect taciturn pre-school wisdom, "Yeah. It was scary."

Sarah's trauma lasted for two days. Finally, the morning we awoke in our cabin at Yosemite, she seemed to have calmed down. There was a large boulder outside our cabin, which delighted both her and Sean. I let them play on it for awhile, then pulled them off so we could do some sight seeing. We rode the park bus to Bridal Veil Falls, where I took this picture: 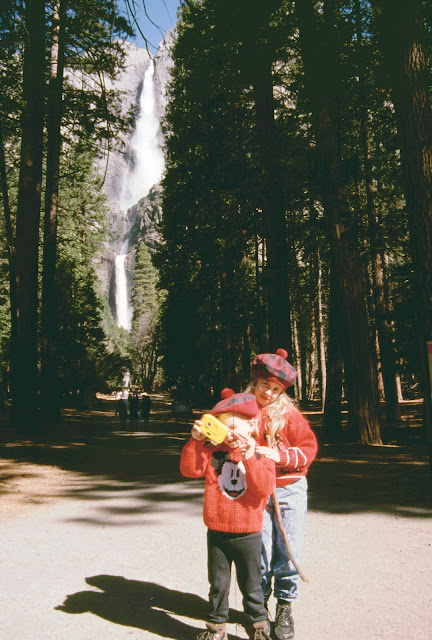 You may have noticed the tams they're both wearing. The previous fall, my parents had gone to visit my brother David, who was on a semester abroad in England. They came back from the trip with these hats for all their grandchildren. They both looked cute, but Sean's hat--as well as his Mickey Mouse sweater--really set off his bright copper hair. (Like mine, it has darkened over the years--though now mine is going to silver, so perhaps it's lightening again?) There was a busload of Japanese students visiting the waterfall at the same time as us, and they seemed especially taken with Sean with his red sweater, red hat, and redder hair, snapping pictures of him, cooing over how cute he was. Sarah had a jealousy attack: why wasn't she getting any attention? She was cute, too!

I think that may have colored our other activity: a short hike to a reflecting pool, where we ate a sack lunch I had packed. It was a beautiful spot, with glorious views of awesome granite monoliths. But the children were burned out by now. On the hike back, they fought over who would be carried. We arrived back at the cabin with me finally fed up. They played happily on the boulder until dinner time.

I've called it a parenting midterm, but really, this was a learning experience for me: when one is taking small children on vacation, one does not get to impose experiences on those children. I took this to heart, and every trip I've taken with children since then, I have let them have at least some input to every activity. This has sometimes meant disappointment for me--if you follow me on Facebook, you know I'm an avid outdoorsman, and I would love nothing more than to be able to share it with my sometimes-exercise-averse progeny--but it's been tempered by the knowledge that the right choice on a kid-centered vacation is the kid-centric choice.

The other piece I take from this trip is Sean's words: "Yeah. It was scary." That simple expression sums up the way in which Sean has survived all that has happened to him over the years: divorce, epilepsy, learning challenges, bullying, separation from one parent or the other and from siblings, moving great distances from all he  knows and loves. Yeah. It was scary. And now it's over.

So much of the psychic pain we experience comes from not letting our traumas be over. Yes, divorce was horrible to me, and it has continued to visit me with inconveniences and causes for outrage; but the worst of it came at the beginning, and that part is over. Yes, the crisis of Sean's birth, and the subsequent crisis of his seizure disorder and the long gauntlet of neurologists, drugs, and finally the crazy diet that seems to have been the cure--all of that was scary. Yes, losing contact with my children when they moved to Idaho was scary. Yes, fighting for custody of Sean three years later was scary. Yes, being laid off and having to figure out how to survive on free-lance income was scary. All of it was scary.

And it's been tempting to let many of those traumas define who I am in the present moment. Difficulty with forgiveness, refusal to reconcile, comes out of hanging onto the scariness of those past traumas, and blaming others for the pain it birthed. But holding on tight to pain is a recipe for misery long after the event that caused it. Yeah. It was scary. But it's over.

In 2003, I took my children back to Disneyland. Sean couldn't get enough of the roller coasters, and insisted on riding even the most frightening one in the new California Adventure. And Sarah? This time, she was the one insisting on Space Mountain. She wanted to prove to herself that she could handle it.

And yeah, it was scary. But only for a minute.
Labels: children Disneyland divorcee fear single parenting Yosemite
Location: Disneyland, Anaheim, CA 92802, USA