These two pictures are of the same people. The older one is me; the younger (by 23 months ten days) is Ocean, who throughout childhood and adolescence was my closest friend, favorite playmate, co-producer (we did radio parodies), and partner in bickering. He was given the name Stephen at birth, and kept it until, at 36, he renamed himself. The decision has not been well-received by our parents, and fourteen years later, the jury is still out among our other brothers. For my part, I've always respected the right of individuals to choose their own names. I just haven't ever felt the need to change my own--except during me first marriage, when I hyphenated my last name.

I have four younger brothers. Each is unique. We're all artists in one way or another, and several of us write. Three of us have also been involved in education. Two have been ordained, though neither remained in ministry. All have been married, though only two remain married to their first and (we all hope) only wives. We've all brought children into the family, many of whom are now grown. Three of us have moved away for some part of our lives, but in the end, we all came back. We are all now within two hours' drive of each other and our parents.
We are PKs. Preacher's Kids. Clergy Offspring. Between the day I was born and the day my youngest brother graduated from high school, my parents moved eleven times. After the first two, every move was to a Methodist parsonage. (For more of this story, see "O Father Where Art Thou," Part I of this series) There's a lot to be said for growing up itinerant: when something blows up on me, I can quickly change course; I'm highly adaptable; and I tend not to get too attached to an apartment, a house, or an address.

On the negative side, I'm predisposed not to get attached, period.

I had a hard time making friends as a child. I'm an introvert, so I'm not given to making overtures. If I sense compatibility, I'm very quick to respond to them; but again, I don't become overly attached. When it's time to move, I experience a few days of anticipatory grief, then a day or two of sadness over friends left behind, but then I move on. The frequency of these transitions in my youth may have actually discouraged me from making deep friendships. Apart from my brothers, there was no one I could count on being around for more than three years. And then there's the clergy etiquette side of it: once a Methodist pastor leaves an appointment, he or she is expected to break all contact with the church and the community in which it is situated. It's considered bad form to revisit a former parish without the express invitation of the current pastor, and even then, it's discouraged. This makes it especially difficult for PKs to maintain friendships after a move: if Dad's supposed to refrain from visiting, how will his sons get there? Too late, I learned that the solution to this dilemma was involvement in the conference-wide youth division. I went to my first Methodist youth camp after my sophomore year, and made friends I met up with again at other youth events. If only I'd started going to camps in junior high...

Back to my brothers, the ones this is really about. Here they are, along with Dad (one of the rare occasions when it was our mother taking the picture) helping me celebrate my 21st birthday: 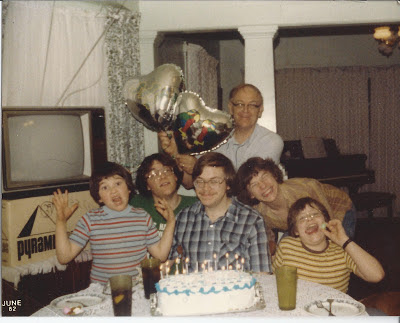