I have now updated this post to include photographs I took of the eclipse. There are not as many of them as I remember taking, but at least one of them--my friend Bruce with a box on his head--is well worth taking a second look at this. And the eclipse isn't bad, either!
﻿
* * * * *
The sky did not look promising that morning.

There were a busload of us sleeping on the gymnasium floor of Goldendale High School. It was a field trip combining Philomath High TAG students and my senior physics class. We rode up to Goldendale, Washington, on February 25, stopping at the Bonneville Dam to take the tour of the massive turbine room and watch a barge pass through the lock. Those were awesome sights, but what we were really there for was to come early the next morning. I had a cold, and slept even worse on that floor than I normally would have, but I was awake at 6 like everyone else. I can't remember what we had for breakfast. We were all outside by 7:00, filling the staging area of the school parking lot. It was a Saturday morning, and there were many other scholastic field trippers with us. The main event was supposed to happen at 8:13 a.m. We awoke to a complete cloud cover, threatening to render our journey irrelevant. What's the point of driving 200 miles to see a solar eclipse, only to have the view blocked by cloud cover?

Admittedly, we should not have expected clear skies. It was, after all, winter in the Pacific Northwest, and even though Goldendale was on the dry side of the Cascades, even the high desert experiences long periods of overcast in February. But we were young and hopeful. We'd spent weeks preparing for this event, building tools for observation: cardboard boxes with pinholes we could put over our heads to protect our retinas which, when worn, made us look like we'd gotten our heads stuck in them while foraging for snacks.

I snapped pictures of my friends and younger brother, Stephen, wearing boxes, checking the eclipse's progress with what little of the sun's light was leaking through. This one is of Bruce Kelley: 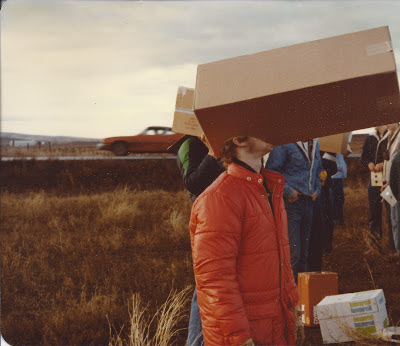 I set up a tripod to hold my borrowed camera. I crossed my fingers. And then, at about 8 a.m., as the sky was beginning to darken, the last wisps of cloud cover began to move away from the sun. The timing of it was uncanny. It was as if a celestial clockmaker had engineered the weather to perfectly coincide with the event we were there to see, to put us on edge, then at the last minute relieve our anxiety so we could appreciate the show even more.

And we did. As the eclipse neared totality, we saw the effects we had learned about: the weird patterns of shadow rushing across the landscape, the sudden chill coming over the land, the diamond ring effect as the last bit of the sun vanished, to be followed by "Bailey's beads," as tendrils of sunlight shone through canyons on the moons surface. At this point our boxes were stripped from our heads. I was snapping picture after picture, using a remote cable to be sure the camera didn't shake at all on its tripod. It was awe-inspiring. And then it was over.

What was so stirring about this rare but ordinary event? The moon, and earth are performing a constant dance as they orbit the sun together, eclipsing each other with regularity. What about an eclipse stirs such awe in humans?

Apart from the weirdness of having the sky go dark in the middle of the day--and at 8:13 on a winter morning, it hasn't been out that long, anyway--I think it's the way it forces us to know that objects that seem stationary--the moon, the sun, the earth--are, in fact, constantly in motion. That the moon takes such a short time to transit the sun underlines this even more. Here's an object just over a quarter the size of the earth, still huge by human standards, and it moves. We don't see that movement ourselves--at that distance, it's too slow to register on our consciousness--unless we see it happening in front of the sun, and then it can't be denied. 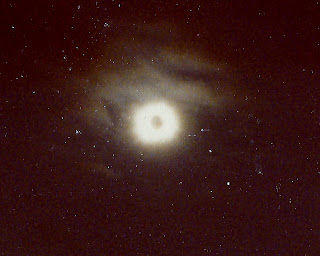 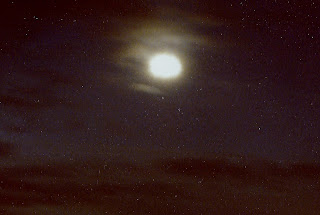 We left this place of awe, piled into the bus, and drove as far as Stonehenge. Wait, isn't that in England? you're probably thinking--unless you know your Northwest trivia. There is a scale model of Stonehenge at Maryhill, a small unincorporated community on the bluffs overlooking the Columbia River. The goal of its builder was to set up an astronomically correct duplicate of Britain's paleolithic Stonehenge, but with two differences: first, it's complete, in no way suffering the ravages of time; and second, it's a war memorial, specifically to all the young men of Klickitat County who died during World War I.

This morning, as we arrived at Stonehenge, the place had been occupied by hippies--or, more specifically, Wiccans: (and no, I did not take this picture--found it on the internet instead!)

We dispersed around the monument, checking out the excellent view of the Columbia River, reading the plaques dedicating each pillar to a different fallen soldier. And we overheard Wiccans talking about why they had gathered here, what they had been doing in honor of the eclipse. One priestess was talking about sacrificing a chicken. I'm not sure if she had done it there, that morning, or if it was just part of her normal routine when she was home. She was joking about how ordinary square folk would ask her, in shocked tones, "You sacrifice chickens?" then go back to eating their McDonald's hamburgers. I was irritated by the self-righteous tone in her voice, and also by the idea of sacrificing any living thing to a deity. I was, after all, a naïve Protestant who believed the death of Jesus had ended once and for all God's thirst for blood sacrifice. There are many problems with that idea, based as it is in the atonement and the notion that God would ever demand the death of an innocent to spare the rest of us from divine wrath, but I've written about--and will again write about--this in other parts of this blog.

Suffice it to say for now that I didn't understand the irony of my own indignity over what this woman was saying. It's only today, in fact, reading up on the origins of this Stonehenge, that I see what was at work here. Sam Hill was a Quaker who built Maryhill, and this monument, with the goal of establishing a utopian community. It was never realized, and most of the buildings ultimately burned down, but Stonehenge remained, a reminder of the periodic sacrifice our world makes to the god of war. Sam Hill hoped this structure, a replica of an ancient temple at which, he believed, human sacrifices were carried out by prehistoric Druids, might convince modern humans of the hypocritical folly of regularly sacrificing our young in pointless wars.

Sadly, most of us, particularly our leaders, don't see it that way. We're shocked at the idea of sacrificing a chicken to a pagan god, but don't think twice about sending 20-year-olds to die overseas for abstract concepts. Those of us who do raise the protest are marginalized as radicals, doves, unrealistic peacemongers who don't understand how the real world works.

Every Sunday at the church where I play the piano, the morning prayers are followed by a simple ritual called "honoring our fallen soldiers." A short prayer is said to all who have died in Afghanistan, the place where American soldiers continue to fight a low intensity war, including enemy combatants and civilians; and then a list of Americans who have died the previous week is read, along with the age and home town of each. For every name, a penny is dropped in a large glass bowl. It now contains thousands of pennies.

I hear these names, and wonder about the sun going out for their mothers and fathers, sisters and brothers, wives and husbands, sons and daughters. I wonder why they are there, who they are protecting me from, whether the corrupt government they are shoring up is really any better than whatever will take its place when it collapses, whether the war god can ever be appeased. Are we really any more civilized than the Druids? Is the religion our nation practices really any less bloodthirsty than that of the Wiccan priestess with her chicken sacrifice?
Labels: Goldendale eclipse Maryhill peace Philomath High School Quakers Sam Hill Stonehenge war
Location: Goldendale, WA 98620, USA