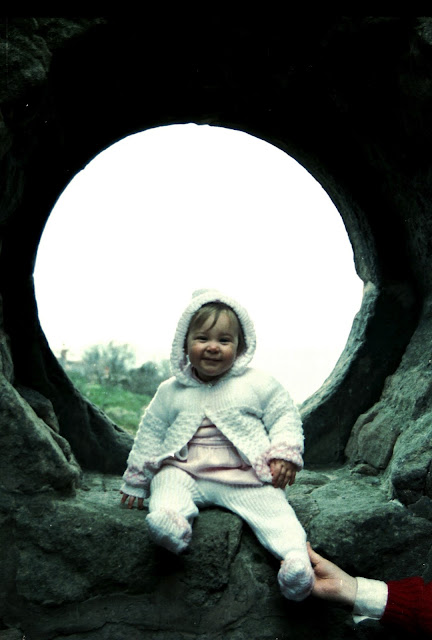 My daughter Sarah in the window of an English castle, sometime in 1990.


"There is no foreign land; it is the traveler only that is foreign." --Robert Louis Stevenson

It was a temporary condition. I traveled to England with my wife Brenda for a one-year "post-internship," to gain a year's experience serving a British church. Our first child, Sarah, was born there, free of charge thanks to the fantastic National Health Service. We were supposed to return to America after one year, but then serendipity struck: the pastor who was to take our place (we were in an interim appointment) resigned from the ministry just a month before our departure date. We volunteered to stay another year, and what had been a students-abroad experience became a true chapter in our lives, probably the happiest time in our eight-year marriage, and a touchstone for judging every subsequent event in my life.

Britain was a whimsically foreign land to me. I was no stranger to travel; I'd been across the United States many times, had lived on both coasts, the Midwest, and Texas, and had traveled in both Canada and Mexico, and of all the places I've lived, Texas remains the most alien to me. What struck me most about Britain was the sense that here was the prototype, the primitive original from which my own culture had evolved on a parallel, but radically different track.

It wasn't the language, however much fun Brits and Yanks can have comparing colloquialisms (speed bump/sleeping policeman; crosswalk/zebra or pelican crossing); nor was it the food (theirs is saltier, ours is sweeter). Not even the most obvious practices of driving on the left, or separating afternoon tea from a late evening dinner, threw me for long. The single most striking contrast between my identity as an American and their identity as British was their sense of humble, yet dignified responsibility.

It manifested itself in many ways, some more subtle than others. Each by itself struck me at the time as an intriguing contrast; put together, they constitute an overall sense of national maturity that our culture has yet to claim for itself.

I am certain the following list is dated. It's been 23 years since I left Britain, after all, and I would not be surprised at all to find that many of these differences have faded over the decades; but I would also not be surprised to learn that some of them have become even more marked.

1) Garbage day: In Portland, we're obsessed with recycling, much more than many other parts of the country, but most Oregonian municipalities still permit large refuse bins of trash destined for the landfill. In Britain, an island nation with little room for such eyesores, we received one garbage bag a week from the municipal council. Everything had to fit into it--there was no recycling at the time, though I expect that has changed--and any leftover trash had to be carried over into the next week.

2) Refrigerators: Our British unit was the size of a dorm fridge. Its freezer could hold a quart of ice cream. It was expected that most food would be purchased fresh from shops on the High Street.

3) Supermarkets: Our local "super" market was the size of an American convenience store. Carts were very small, partly because of the narrowness of the aisles but also, I expect, because few people had room in their kitchens to store as much food as Americans typically do. The older generation at this time had lived through the Depression, World War Two, and the rationing that continued into the 1960s, so filling up a large grocery cart (as one could do at Sainsbury's or Safeway, the true supermarkets that had to be driven to) was considered hoarding.

4) Grocery bags: They were all plastic, something that was just beginning to happen in America, and we had to pay for them. It was then expected that they would be reused until they wore out. The first time we shopped at Sainsbury's, we neglected to take our own bags; rather than pay for bags, we then filled the boot of our Mini with a cartload of unbagged groceries. Unloading was an adventure.

5) Cars: They were smaller. Much smaller. We had a Mini. It got great mileage. The smallness of the cars was a necessity: streets were narrow and winding to the extent that larger vehicles might not fit in some neighborhoods; and the price of fuel was such that only the wealthy could afford to drive an American-sized luxury car or SUV. Beyond the size issue, driving was considered a privilege, not a right. Obtaining a license was a very difficult thing for a British youth (we had international licenses, and didn't have to worry about it), with rigorous testing both on paper and behind the wheel. Many people spent their entire lives using public transportation, which was far better in even remote areas than it is in many American cities.

6) Heating: Our house had central heat. This was an unusual modern convenience. It was a radiator system with a mechanical timer, something I'd never seen before. (I've since had HVAC systems with electronic timers, but this was 1988.) The same water used to heat the house came out of hot water taps in the kitchen and bathroom. The shower had a small electric unit for heating the water: the hotter the water, the weaker the pressure. Two rooms had gas space heaters, as well. All of this was designed to keep us from wasting energy by heating a room or house when it was unoccupied; practically, it meant the place was often chilly.

7) Lights: I've always believed in turning off lights when I leave a room. That sets me apart from many other Americans, as I can see when I take a walk in the evening. The British were as frugal with electricity as they were with gas. When my family visited us, they had every light in the house on, whether they needed them or not. A church lady bringing Brenda back from a women's group meeting gasped when she saw the house, saying it looked like "the bleeding Blackpool illuminations"--the British version of Vegas.

8) Healthcare: Where can I begin? There's a passage in the gospel of Mark about a woman coming to Jesus to be healed of a chronic condition after "suffering under many physicians." That is not my experience of British healthcare, but it sums up well how I feel about the American version--though I should add that I've also suffered under many insurers here at home, as well. There were two striking things about getting healthcare in Britain: simplicity and comprehensiveness. We visited a local clinic, just as I do in Bethany, seeing the doctor assigned to us by the clinic. If we were to sick to walk the four blocks to the clinic, the doctor came to see us. I visited a number of hospitals in my role as pastor, and found patients sacrificing only two things compared to American facilities: privacy and carpet. The lack of privacy in the large wards was compensated for with curtains (just as in American double rooms), and lack of carpet made floors moppable and thus more sterile. The far greater benefit came in length of hospital stays: without insurance companies breathing down their necks, patients stayed as long as they or their doctors believed they needed to. New mothers were expected to stay in the maternity ward until they were strong enough to go home. Patients with severe conditions could rest easy that they would not be bankrupted by the huge portion of their bill that insurance would not cover, because all of it was already paid for. There was never any arguing with an insurer over what was covered. It all was. And the pre- and post-natal care were better than anything I've experienced or heard about here, with many of the appointments happening in our home. This is why when people worry about losing their "freedom" to "Obamacare," I shake my head at their ignorance, remembering how wonderful it was to be free of worry over how we were going to pay for the excellent care we and our baby received.

9) News: It was global. Watching the evening news, I learned much more about what was going on in the world than I ever have from an American news program, including NPR. This extended to coverage of the Olympics (live from Seoul, 1988). There was still plenty of coverage of American athletes because they were winning; and there were a few British athletes who got some special attention; but my greatest impression of the games was, for the first and only time since I started watching them, that this was a truly international competition.

There are many other things I could add to this list, but by now, I think you've got the gist of it. Out of necessity, the British had learned to be frugal. Crowded onto a small island, they never had the room to acquire large quantities of unnecessary consumer goods nor to dispose of them. Saddled with a four-decade-long depression, they couldn't afford that much stuff, anyway. Rationing had also taught them to queue, waiting patiently for their turn; delayed gratification was a part of their identity. They also had learned--or, perhaps, never forgotten--responsibility for each other. Their social welfare state cared for people in far less severe conditions than are needed to qualify for public assistance in America, and far fewer people fell through the cracks. The idea that anyone could be denied healthcare because of poverty was unthinkable to them.

I came back from Britain feeling "vastened" (a term I borrowed from science fiction author Frederick Pohl), my mind opened to so many more possibilities, my heart empathizing with so many more people, than my previous American narrowness had permitted. Simultaneously I had learned frugality, to be sensitive to the wastefulness all around me, and to minimize my footprint on the world. I came back from this only to descend back into the "USA! USA!" culture of Dallas, a place that is as consumer/driver/patriot-oriented as any city in America. I came back as the US was ramping up to the first Gulf War, and was horrified by the rampant war-mongering I saw all around me. The shock of re-entering American culture tore me asunder, sending me on a downward spiral from which I would not completely emerge for nearly two decades. And that will be the subject of my next post.
Labels: consumerism expatriate frugality Great Britain National Health Service Obamacare
Location: Portland, OR, USA