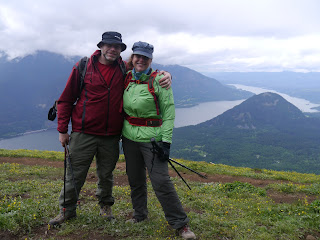 It came out of the green. By that, I mean we were climbing up a slippery, ridiculously steep trail through the dewy trees on the south face of Dog Mountain when Amy popped the question: "Do you want to get mountain married?"

It took me completely by surprise. We'd been together for three years at this time, and we were both extremely marriage-averse, for reasons I'll explain (but not in too much detail) later in this post. We were engaged in one of our favorite things to do together, something we'd done on our second date, and as often as we could ever since: hiking. Of all the things we enjoy together, this is the one that probably brought us closest, and has most cemented our relationship. We've been up every significant trail in the Columbia River Gorge, as well as trails in the Coast Range, the Cascades, and Utah. This summer we'll be backpacking, most likely in the Olympic National Park, possibly somewhere else, as well. In two days, to celebrate Amy leaving her office job, we'll be climbing Hamilton Mountain. And, of course, we have frequently returned to the trails of Forest Park, site of that first hike more than four years ago. In the last two years, we've added some other outdoor sports to our repertoire: bicycling, snow-shoeing, and cross country skiing. They're all good, but the one that does the most for our coupleness is still hiking, preferably up a mountain.

"Mountain marriage" has been a useful term to apply to our relationship. In a way, the outdoors has become the token of our bond, the visible symbol of our togetherness. As we climbed Dog Mountain that day a year ago, we speculated about what sort of vows we could take once we reached the summit. I don't honestly remember what we said, but I know it was sincere, profound, and, in some way, funny. I'm sure it was about loving and supporting each other and always, always being up for adventures. I handed my camera to one of the other hikers at the summit, and we had our "wedding picture" taken. That's it at the top of the post.

In the months since, we've expanded the term by altering the geographical modifier, and so we've also been "desert married," "snow married," "ski married," and probably some others escaping me at the moment. The one thing all these have in common is that this relationship is an adventure we are sharing.

We both came into this relationship carrying baggage: I had just for the last time lost my bid to have my son with me during the school year. Amy had just finalized her divorce from a man she had been with for twenty-five years. I had also recently (about eighteen months earlier) had an engagement broken off. These failed relationships left us both marriage skeptics. There are so many ways to be hurt when you pledge your life to someone. So we were cautious with each other, keeping options open at first, taking our time using the "L-word" (No, not lesbian. Not lasagne, either.). But hike by hike, date by date, that Old Black Magic put us in its spell. I learned about ComedySportz, saw Amy perform with the Farm Team, started dropping in on the post-show and post-workshop beer sessions, began playing keyboard for first the Farm Team, then the Pro Team. Amy's friend Mike thought up an act the three of us could do together, and Soho Smooth was born. A ComedySportz friend invited us to join him and his girlfriend on a one-day megatransit of Forest Park on the Wildwood Trail, 31 miles without stopping. We bagged more and more peaks, including the South Sister, went to New York City together. Her kids were seeing more of me, and Sean was seeing more of them. In December, 2010, I moved in. It wasn't planned--it just sort of happened--and it took awhile for Amy, her kids, and my own friends and family to accept it, but they all did. Last July, just over a month after we became Mountain Married, we moved into the house we now occupy, for the first time putting both our names on a lease and on the utilities that go with it. We don't have a joint checking account--probably never will--but for all practical intents and purposes, Amy is what used to be called my "common-law wife."

It's hard to know what to call ourselves. When introducing each other, we often use the word "partner," but Amy's daughter is uncomfortable with it (that L-word--yes, lesbian--is too closely associated with it in her mind), and would prefer "boyfriend/girlfriend," though that always seems both too immature and impermanent to describe what we are. An increasingly large percentage of Americans are choosing this form of cohabitation (which sounds like something hamsters do), what used to be called "shacking up" (and no, "shackmate" doesn't cut it; I've tried it, and she doesn't like it). The bottom line is that we love each other deeply, are happily creating a life together, and want it to go on until death; but we don't want to be legally married.

And that is the problem: marriage is a legal contract. We've signed that contract with other people. It didn't end well, and the unwellness of those endings has gone on to haunt us long after the marriage ended. I remember, when my second divorce was still new and raw, attending a wedding for a young couple I'd been on staff with at a summer camp, and feeling the very strong urge to run down the aisle screaming "Don't do it!" I have been to very few weddings since then. I did experience a softening toward the institution in 2006, when I proposed to my (then) girlfriend of a year; as I alluded to earlier, that engagement ended after a year, which then led to me being "through with love."

In the aftermath of my first divorce, I remember hearing people complain that it is too easy to get divorced. My response to them was that divorce is the hardest thing I have ever been through, harder than finishing a marathon, harder than bereavement, harder than almost losing my baby son at birth. It's much too easy, I'd say, to get married. People get married without really knowing each other (something I confirmed in my second marriage, to an even greater extent than my first), without having had a real fight, before they've really had the time to outgrow their initial infatuation with each other, to see if it can survive past the steamy addictive first year. That does go away; it has to. No two people can sustain that level of hormonal activity for a lifetime.

I remember visiting parishioners who'd survived six decades of marriage. It wasn't always easy, they said; there were times when they really had felt like walking away from each other. But then they'd remember the promises they'd made to each other, and the love that gave birth to those promises, and found ways for that love to evolve past infatuation and attraction to something stronger, more mature, and far deeper. I wonder how many of the marriages I performed have been able to find that path to mature love, and how many foundered on the real differences that were there once passion was distilled from the relationship. The superficial feelings, however powerful they may be, do boil off over time.

My hope in my mountain marriage is that it is based on adventure. Amy and I have been in some extreme situations on our expeditions. On the South Sister, I led us astray down a steep slope of shale, and didn't discover until we'd gone a couple of miles further that I had lost my camera somewhere in the scree, all the spectacular shots I'd taken on the climb and descent just gone. That brought out the ugly in me, especially coupled with the fatigue that was wearing at both of us. A year and change later, snowshoeing up a butte near Mt. Bachelor, low blood sugar put Amy in a state of shock just a few hundred feet from the summit. We ate, rested, and gave up on getting to the top. In both cases, and in many others in which one or the other of us was driven by the extremity of what we were doing to a darker, weaker part of the psyche, we've found it within ourselves to accept, forgive, and ultimately support each other through the momentary crisis. Passing through these moments has, I believe, conditioned us for facing the times when we've come up against something that led us to question our commitment, work through it, and come out stronger on the other side.

Mountain marriage is not for everyone. Many will find the physical aspect of it daunting. Many will be more cautious about venturing out on lengthy roads or trails. Whether you climb actual mountains with your partner, though, I know you will face summits in your relationship. And I hope you will, as we have thus far, transcend them and emerge a stronger couple, even more deeply in love.
Labels: cohabitation domestic partnership hiking marriage outdoors shacking up
Location: Portland, OR, USA