No Place for My Stuff 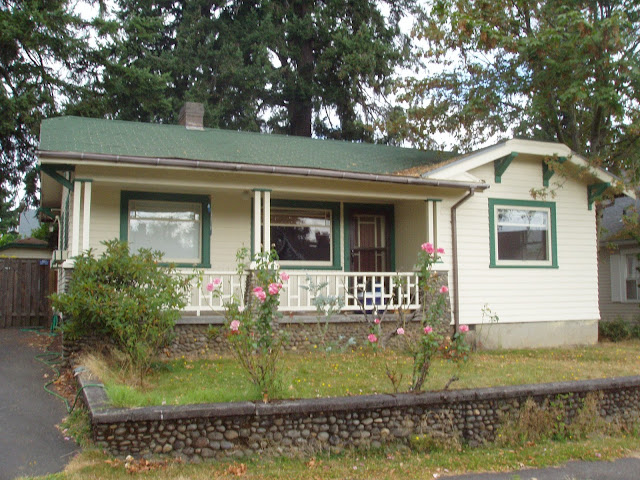 This little bungalow on Northeast 74th Avenue was just right for me when I moved into it. My ever-changing life had just taken a hard turn in a direction not to my choosing, but it was hardly the first time something like that had happened. In this case, I'd had two enormous transitions hit me simultaneously: my children were being moved to Idaho Falls, and my contract at a Catholic school in Vancouver had been canceled for looking into other jobs closer to home. Ironically, I found two jobs to take the place of that one: a church music position in Vancouver; and a 0.8 FTE music teaching job in Hood River. The 90 minutes of commuting I'd been doing was about to get much longer.

This neighborhood was a good compromise between the two jobs, half an hour from the church, an hour from the school. It still meant crazy driving--there was no avoiding that--but it was close to both I-84 and I-205, so I generally had clear sailing the entire long way to work, whichever direction I was heading. The house itself was actually smaller than the apartment that had preceded it, which is where the topic of this entry comes in. I had, by now, accumulated as much stuff as I was ever going to own. A great deal of it was kid-oriented: furniture, clothing, toys, books, assorted other items that belonged to my children. By now, six years after my second divorce, very little of it suggested coupledom. I slept on a futon, watched television on another futon, ate meals at a dinette, kept my desktop computer in the dining area. The huge basement held my washer and dryer, as well as several boxes of outdoor recreational supplies. It was a bachelor pad, through and through.

While I lived there, I began a relationship with another teacher that, after a year, became an engagement; a year later, it was broken off. My church job shrank after the first two years, as well. The commute up the Columbia River Gorge was becoming an enormous burden; there were afternoons when, driving home, I caught myself dozing at the wheel while traveling at 70 miles an hour. Had I known the engagement was going to end, I probably would've moved to Hood River, and only driven to church on Sundays, the one day I still needed to be there. But I thought I needed to work closer in, spend more time with my fiancée, so I took a full-time job in Banks.

The commute was easier, but everything else started coming apart. The end of the engagement shattered me. The psychic pain of having Sean for a monthly weekend, then coaxing him onto a plane, was coming to a head as he began telling me for forcefully that he wanted to live with me. And the church job went completely away. In the summer of 2008, I made two huge decisions: to give up the house on 74th Avenue and move to Forest Grove, just ten minutes from Banks; and to go to court over custody, fighting to have Sean live with me while he attended high school in Banks.

The move was huge, and began with a two-day yard sale. Sean and I both went through the entire house, locating anything that we no longer had any use for. The front yard, the driveway, the porch were all filled with items we were offering for sale. Going through the house, thinking about how much of that stuff was just taking up space, whether there would ever be a use for it, I found again and again that most of it didn't matter to me anymore. I didn't need that stereo, those records, those books, that book case, this clothing, that tent, the office chair, the desk, the folding tables. By the end of the sale, we'd cleared several hundred dollars, much of which went into Sean's savings. There was still plenty left over, and a good deal of that had considerable value--but only if a buyer could be found. That wasn't going to happen, so after taking a long, sad look, I loaded most of it in my car and drove it to a Goodwill donation center.

Even after selling and donating so much, we still had far more than our Forest Grove apartment would hold. A lot of that ended up in my parents' attic in McMinnville. Now the precedent had been set, though. Every move I've made since then--there have been three--has resulted in the shedding of large quantities of perfectly usable items, most of it through donation.

Each time I move, I have less stuff to take with me. I think this is partly a factor of realism: the older I get, the less I need to have things around that I know I'll never use. I don't need books I'm never going to refer to or reread. I don't need movies I'm never going to watch, furniture I really don't like, clothing I'm never going to wear. I don't need redundancy in my kitchen or garage. I'm very quick now to just haul that extra stuff to Goodwill and be done with it. Occasionally I'll put something on Craig's List, or take a box of books to Powell's (they rarely buy more than a dozen of them); but mostly it's just too much effort, so off to Goodwill we go.

This shedding marks a change within me: the place acquisition once occupied in my heart has shriveled, may be gone forever. I still appreciate beautiful things, and enjoy being around them, but they're mostly ephemeral: pictures, recordings, roses, consumables that will take up no space at all once I've eaten or drunk them. The one category of stuff that continues to grow in our garage is outdoor gear, but I see all of that as means to an end.

The transition that began on Northeast 74th was from things to experiences. The objects I choose to keep evoke memories: photographs of my children, my partner, beautiful places I have been. I'd rather spend a vacation climbing mountains than touring antique stores. I'm just not interested in possessing anything but a memory.

In five years, Amy's daughter Sarah will graduate from high school, and we will seriously look for a new home. We want it to be a craftsman, preferably on the inner east side of Portland. We want it to be small. Two bedrooms is plenty. And we want it to have room for a garden. We want to keep the cost down because we'd much rather spend our money on experiences than things. Having a smaller place will, of course, mean there's no room for a great deal of our stuff; and that's fine. We know where the Goodwill truck is parked.

George Carlin did a hilarious bit in the 1980s about finding a place for his stuff, and I related to it. Most of my life I've been trying to fit all my stuff into whatever cupboards, closets, and shelves came with the place I was living in. My address has changed a lot over the years, and like most Americans, I've found myself moving more stuff each time--until now. One of these days I'll be able to rent the smaller U-Haul for a move, and will feel a surge of pride for what I've accomplished in the area of de-acquisition. If I'm lucky, when it comes time to sprinkle my ashes on a mountaintop somewhere, I'll leave behind just a few precious items for my heirs to divide amongst themselves. Hopefully what I'll mostly leave is memories of the adventures we've shared and the love we've known for each other.

And that is stuff I can always find a place for.
a place for my stuff acquisition Goodwill moving shedding
Location: Portland, OR, USA