O Father Where Art Thou? (Or, The Men in My Family, Part I) 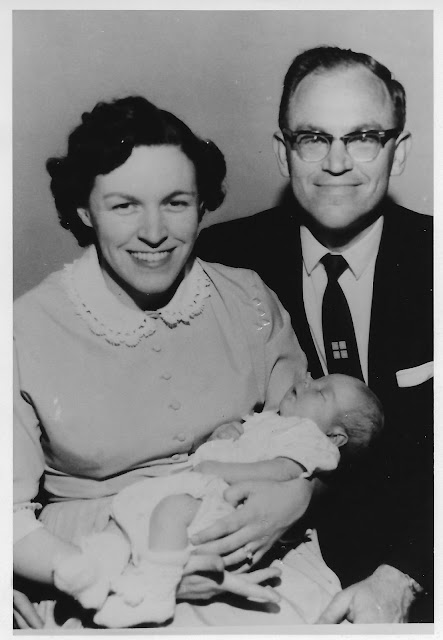 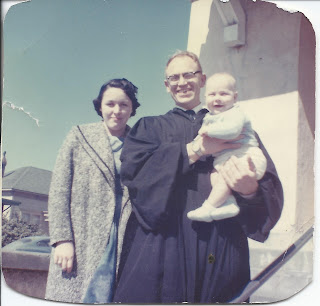 I don't have a lot of pictures of myself with my father. There's a simple reason for that: throughout my childhood, my father was the family photographer. The pictures I of him I took myself, starting with my twelfth birthday (when I got my first camera), do not, of course, include me, for the same reason. So a picture with both of us in it is a rarity. You could reach the conclusion from this dearth of father-son shots that, like many mid-century fathers, mine was absent from my childhood; and you would be partially right. Dad was 34 when I was born. He was almost a decade into his career, an American Baptist minister about to move to his third job. He was actually out of town, interviewing for that position, when my mother went into labor. I spent my first five weeks in San Jose, and then we moved up the coast to Fort Bragg.
In fact, though, Dad was about as involved a parent as a man of his generation could be. From all accounts, he doted on me, and what pictures I have of us together are of him playing with me in some way, as in this early piano shot: 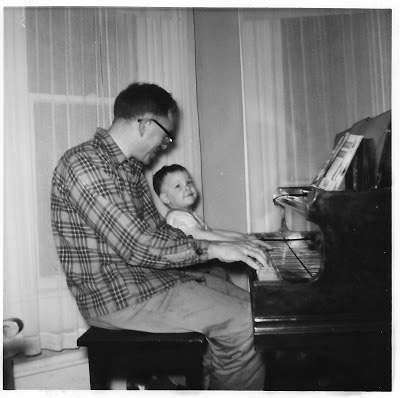 From what my mother tells me, I was extremely attached to my father, to the extent that, when he needed to go to work, he sometimes climbed out a window to avoid me making a scene at the front door.
We were in Fort Bragg three years. Stephen was born after two. And then Dad was abruptly dismissed by the church. I don't know why this happened, just that it was a terrible blow to both my parents. As has been the case with my own career crises, this one led Dad to take a hard look at whether the pastorate was right for him. He decided very quickly to go back to school, working on what, today, would be a Doctor of Ministry; and he chose Andover-Newton, a seminary in Boston, as the place to do it. There he could be in the CPE program, which would place him in an intense internship as a hospital chaplain; and there my mother could return to her New England roots. I have no memories of that trip, though I do have one faint impression of playing on the floor in the married-student apartment we were in very briefly before Dad took a student pastor position in North Charleston, New Hampshire, just a few miles from Mom's birthplace, Claremont. Mom got an organ job in Claremont, and Dad divided his time between his part-time church and Boston. They both remember this time as financially difficult, but happy.
He stuck with the Andover-Newton program for at least three years, and I have memories of him being absent for weeks at a time. He had two different appointments in New Hampshire, both to Methodist churches. (I've told people for years that leaving the Baptists was a matter of simple pragmatic responsibility: once you're part of the Methodist system, unless you engage in some kind of crazy misconduct, you will always have a job and a house. You'll move more often than a Baptist would, but you won't have to worry [too much] about feeding your family.) He ultimately dropped out of the CPE program. He told me a few years ago that it was just too intense, that he couldn't handle the very personal group therapy that was central to the program.
In 1969, now with a third child, Jon, my parents moved cross country again, this time to Idaho. Six years, two churches, and a fourth child (James) later, we left Idaho for Oregon. The fifth child, David, was born soon after we arrived in Philomath, about three weeks into my freshman year of high school. 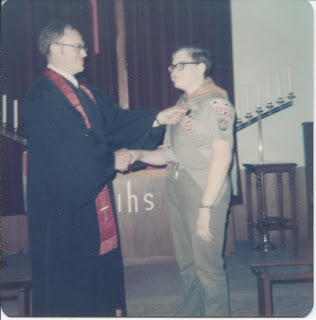 Pastors have flexible hours, so I probably saw more of my father than many children of my generation. He was always able to take us to, and pick us up from, school, Scouts, DeMolay, youth group, little league, and whatever else we might be doing that required transportation. I could also drop in to his office whenever I felt like it; typically, he was the only person in the church building, and I could roam around, finding a cozy spot to read or a piano to jam on in a Sunday School room. In junior high, I delighted in attending confirmation classes taught by Dad, and Sunday School classes were always better when he subbed for the regular teacher, even once I was in high school. Clearly he was proud of my accomplishments, as you can see in this picture, in which he's pinning my God & Country award to my Scout uniform.
But flexibility cuts both ways. Churches in the 1960s and 70s viewed their pastors as being always available. To have a true day off with his family, Dad had to take us somewhere away from the phone. Church meetings happened in the evening, when laypeople were available, so Dad was often absent from the dinner table or the living room. He missed quite a few of my high school concerts due to church meetings, and since he was the only driver, that meant no one in my family was there.
High school was really the time when I became most painfully aware of the growing rift between us. It's not that I was angry with him, though I did feel deep disappointment whenever he missed a concert or a family meal. It's just that we seemed to have less and less to say to each other. He did all he could to be present in my life, reactivating his Masonic membership so he could attend DeMolay meetings, and in particular, volunteering with the Scouts. I could not have made Eagle without his firm but gentle guidance. As is often the case between teenagers and their parents, though, I felt embarrassed by him: the out-of-date clothing he wore to Scout meetings, the survival skills he tried to teach us on campouts, the rusty old bicycle he rode around town. Other boys' parents seemed much cooler to me, though I know I witnessed awkward moments between them and their own sons.
As a father and teacher, I have a much better understanding now of the developmental importance of separation from parents. Young adults have to find their own way into the world. I'm not sure my parents completely understood that this was going on, though as they went through it four more times, it must have made more sense with each successive nest-emptying departure. I know it troubled Dad. I received several letters from him in the 1980s in which he expressed his sadness that we weren't closer, and speculated as to what he might have done to create the rift. I wrote back, trying to explain it wasn't any fault of his, that it was just me leaving home and creating my own space. I think that finally clicked. But, as I'll explain in my next post, it is so tempting to overthink the natural stages children pass through as they individuate, and look for causes outside of biology. Dad went back several times to a moment in my toddler years when he became frustrated with me and expressed his anger. 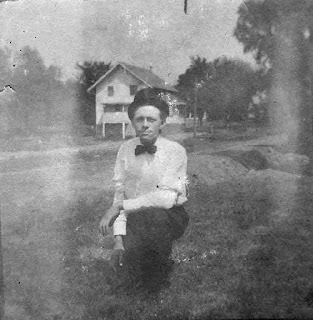 Anger never came easily for him. He learned how to handle emotions from my grandfather, a man I never met (he died of an aneurism in 1944). Dad was 18. Elam Anderson, Sr., was a missionary, a college president, and a New Deal Democrat. He had a lively relationship with his three children. He was also a Swede, the son of immigrants who taught him to hold his emotions in check. I rarely saw my father angry, and when I did, it was a momentary outburst, his coping mechanisms breaking down from too great a load of frustration. So it must have been quite an outburst. Judging by my feelings surrounding the explosions I do remember, though, I really don't think this precipitated any kind of distance between us. In fact, it's possible that, if Dad had learned to express his feelings more freely and frequently, he could have spared himself the heart attack and stroke that marked the beginnings of his declining health.
The family was beginning to come apart now. Multiple teenagers passing through their own separation stages, openly rebelling against church and family, took a growing toll. Apart from the gradual exodus as we went off to college, my mother went back to work. With her two-hour commute, that left most household responsibilities to my father and those brothers still living at home. Frequently Mom would come home to find dinner not even started and the kitchen in shambles. That's probably what led her to make this Christmas gift for us:
﻿ 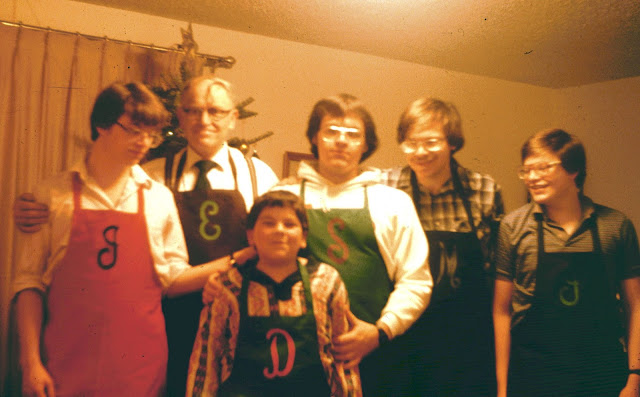 There we are, the men of the family, still mostly boys, and even me, the oldest of the bunch, still more than a year from full majority. Our ages in this photo were 5, 10, 14, 17, 19, and 54. Dad is two years older in this picture than I am now. His combover is escaping. He's still wearing the same glasses he's had since the 1960s. He's wearing a tie and suspenders, so he must have had his suit on. And yet Stephen's in a sweatshirt, and David appears to be in pajamas, so I've got no idea why Dad was dressed up. Maybe it was just a normal workday for him, at the end of which Mom presented us with this gift.
What it tells me most is that my father came from a different time, and stayed for the most part rooted in that time. The mores of that time presented him with a model of parenting that was less engaged than has become customary (one could almost substitute "obsessed" for "engaged" to describe current standards for parental involvement), but he was never really absent from our lives. And looking back with the wisdom of experience, I can see that he was always far more flexible than I gave him credit for. He tolerated all sorts of strange sounds coming from our stereos, rarely insisting we turn it down, never referring to it is "noise." He drove us to activities and meetings, patiently let us work toward being licensed drivers at our own pace, encouraged us to develop our own interests, never pushed us to go to church, and kept the lid on far more well-justified tirades than I've ever managed with my own teenagers.
Probably the best indication of his actual presence is the sheer volume of photographs of all his sons in our parents' albums. Those pictures are there because my father was, in fact, present at those events--but almost always content to be behind the lens, letting us be in our own space, rather than crowding us into some particular niche he thought we belonged in. That is, I think, the best tribute any father can have: that he made the space for his sons to grow, and then stepped out of our way. 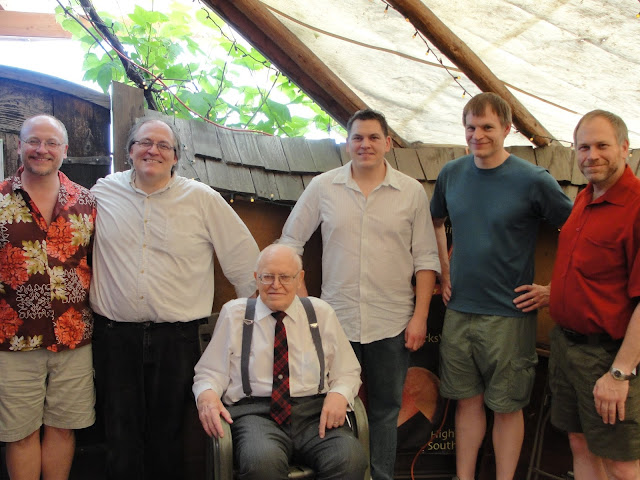