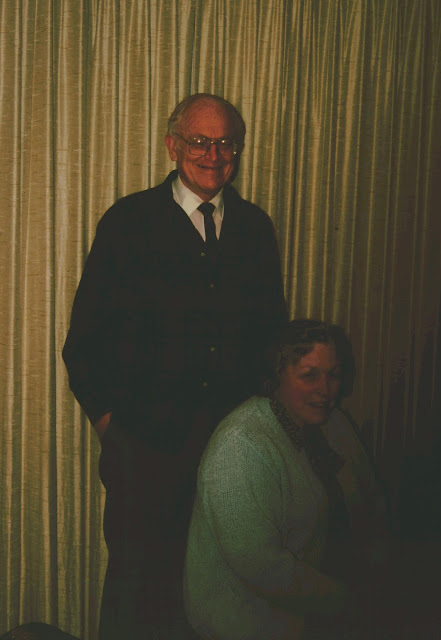 My father was 72 at the time of this photo, my mother 63. They were both retired, living in the house they occupy now, a craftsman house now more than a hundred years old, purchased in 1944 by my grandmother who, after the death of my grandfather, decided McMinnville was where she wanted to live out the second half of her life. My father was a minister by trade, first an American Baptist, then a United Methodist. He served primarily rural churches. He was also a naturalist, gifted with a scientific intellect and a native curiosity that he labored long and hard to impart to his five sons. My mother was a musician, an organist and piano teacher, who taught all of us to play, and insisted we had to master the basics of piano technique before we would be permitted to play any other instrument. I have followed in both their footsteps, becoming both a minister and a church musician. While I no longer preach, it is almost certain that my fascination with the outdoors originated with my father; and while church music is only a small part of how I pay my rent, teaching music is the vocation that I will practice until I retire.
My parents both walked in the footsteps of these titans: 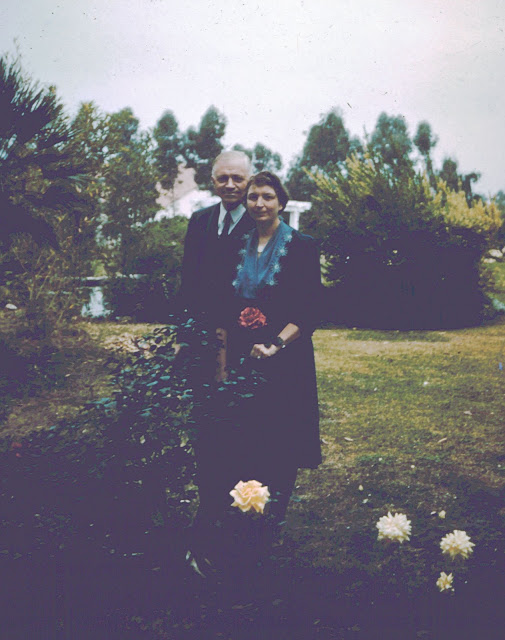 This slide was probably taken in 1943, possibly 1944. The occasion would have been my grandparents' 25th anniversary. My grandfather would have been the age I am now, 52; he would be dead within a year. My grandmother was the same age. She lived to be 97. No one in my generation knew our grandfather, though we have always lived in his shadow. He was an ordained American Baptist preacher, but he spent his entire career in education, whether in the mission schools he founded in Shanghai, China, or in the two colleges of which he was president, Linfield and Redlands. During his years in higher education, he was known as the president who knew every student by name. He was in demand as a speaker throughout the United States, and traveled extensively. And he was well-loved by his wife and children. He died far too young. My grandmother outlived him by 44 years, but never gave up her connection to him. She never remarried. Instead, she reinvented herself as a writer and academic, earning a PhD and serving Linfield as a professor and dean until her retirement. She traveled throughout the world, corresponded with thousands of people, and wrote inspirational books about retirement that became best-sellers. She was far more than a mother-in-law to my own mother, whose own mother died just before my mother's eighteenth birthday. Grandmother's influence on all her grandchildren was monumental. I believe I inherited the writing gene from her, and she always encouraged me in it, even as I sent her wild science fiction stories I had penned. Her greatest example to all of us was that of quiet, dignified, patient acceptance of her advancing age.
These are just four of the witnesses in my great cloud, the throng in the balcony egging me on, rejoicing in my victories, bearing me up in my defeats, guiding me through the many passages of my life. There are many more I have not mentioned here, some related by blood, most not: teachers, professors, pastors, mentors, friends, authors, leaders, counselors, colleagues. Their handiwork is evident in everything I do, and without them, I would be helpless, struggling just to survive, let alone thrive. It is a blessing that I do not have to reinvent the wheel, thanks to them; and a deeper blessing that they have approved of my modifications to that wheel, that they rejoice when I build upon the foundations they laid long ago.
I can only hope that I have had some semblance of their impact on the people who have encountered me over the years: students, parishioners, colleagues, readers, audiences, friends, brothers, sisters-in-law, nieces, nephews, and, of course, the children I have parented. This is the only immortality I covet: that once I am gone, I, too, will be counted among the cloud of witnesses of the next generation, and even as my name vanishes into anonymity, that I will be one voice within the chorus underlying all the great improvisations yet to be performed.
cloud of witnesses generations grandparents legacy parents
Location: Portland, OR, USA