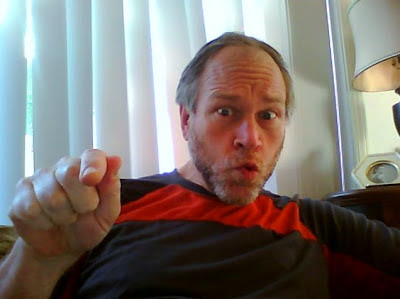 I've had a lot of therapy.

It's not something I'm embarrassed about. It's been an essential part of my adult development; without it, I'd be far from functional. Therapy has walked me through traumatic transitions in relationships and vocations, helped me understand where I come from and why I react to things in the ways I do. Most importantly, it's given me the freedom to choose how I will respond to situations that seem to threaten my well-being.

As a young man, I often felt trapped by my personality. I'd be the lone introvert in a meeting, and because of my native shyness--what some of the retired farmers in my first church called "backwardness"--I could go for the entire meeting without saying a word. I didn't enjoy this. Often I had things to say, but I couldn't bring myself to interject them, to break the flow of the conversation, which seemed to naturally move from one extravert to another, with no room for me to insert my opinion. In my mind, it would've been rude to interrupt, not to mention awkward--even though everyone else in the conversation seemed quite comfortable interrupting each other. The problem for me was that they did it smoothly, while my attempts at participating seemed halting, dissonant, like a needle scratching across a record. Rather than break the flow, then, I'd sit, silently envying the others' facility with the gave-and-take, resenting the fact that no one appeared to value my opinion, because no one was asking for it. I would leave those meetings angry, especially if my wife, who had excellent conversational skills, had been present. I wanted her to be my wingman, making room for me to participate, but she rarely did. And so I blamed her, and all the other loquacious extraverts, for leaving me out.

One of my first entries in this blog was about my dislike for group process (oh how I hate it), and should give you insight into how difficult it is for introverts to be heard in large meetings, and why it's important for those running the show to make sure the introverts have a voice; but the reality of the world is that extraverts do run the show, and that they expect others to follow the same rules they do. My problem, and that, I suspect, of many introverts, is that as much as we want those rules to be amended to include us, it's not going to just happen. Blaming our silence on the rules of the game changes nothing. If we want to be part of the game, we've got to play by those rules, as dumb as we may think they are. If we want a wingman, it needs to be someone like us, another introvert for whom we can interrupt the flow of extraverted chatter with "I'd like to hear what Susan has to say." In so doing, we can alter the rules within that conversation, modeling the behavior of soliciting input from others who may be more reticent, but who nonetheless may have valuable contributions to make. If there is no other introvert in the room, we can couch our interruptions with "I hate to interrupt, but I think we need to consider..." Again, we're modeling a behavior, but doing it within the context of a set of rules that don't normally allow for that behavior--which, in this case, is adding a note of politeness to what feels like a rude interruption.

These two strategies for using interruptions to model politeness and make room for introverted voices are examples of taking ownership of a problem, rather than blaming others for it. It's not the fault of the extraverts that I'm not saying anything; they're playing by the rules by which the conversational game has operated since time immemorial. If I want to be in the game, and if being in the game means changing those rules, I've got to do it myself, not expect them to spontaneously change the way they've been doing things all their lives.

Therapy helped me figure this out by forcing me to confront my darker emotions, to analyze the twisted logic that led to them, to untangle those knots, dig my way out, and act intentionally in situations that felt threatening or disempowering. It didn't happen overnight; I've probably had about two decades of therapy, all told, and I still have qualms about interrupting lively conversations. But now I own those qualms, and I consciously choose whether or not to participate; and if I don't, I don't hold anyone responsible for it but myself. In fact, if I choose to just sit and listen, I'm comfortable with that choice. I don't have to blame anyone for my silence. I've just concluded that everything I would want to say has already been said.

There was a practice in the Metanoia Peace Community, borrowed from the Quakers, called "sense of the meeting." The idea was that a group took a question important to the community, a decision that needed to be made, and sat in silence, meditating on it, waiting for the spirit to move them to say something substantive. There was no obvious flow to this, and often the silences were protracted. If someone said something with which another person agreed, that person could add, simply, "My brother (or sister) speaks for me." Ultimately, a decision was supposed to emerge from this process, a sense of the meeting about how to proceed. This is different from consensus, because no audible debate is taking place. The emphasis is on inner weighing of evidence, including the deep feelings of other members of the community.

I found sense of the meeting to be an incredibly frustrating way to run a community. The irony of this is that it's a methodology that could have been designed entirely by introverts. It's utterly respectful of individual voices, while simultaneously banning reactions unless they are affirming what has already been said. Every contribution is to be only what the speaker is thinking and feeling at the moment, speaking for himself and herself only. You couldn't ask for a more introvert-friendly decision process. And it drove me crazy.

Decisions have to be made. Topics have to be debated. Few organizations have the time to respectfully wait for everyone who has something to say to say it only at the right time. This is the reason for the compromise known as parliamentary procedure, a set of rules for debating and deciding which, in my mind, best balances the desire to have a voice with the need to come to a conclusion. It's not a communitarian approach--there will almost always been winners and losers when controversial issues are put to the vote--but at least things happen, and there is time allotted for anyone willing to raise a hand to have a voice.

That's a digression. The heart of this essay is ownership.

Therapy can be threatening to the other people in a patient's life. I've had partners and family members ask me after a therapy session whether they came up. Often they have, and not necessarily in a complimentary context. My inner struggles usually originated in relationships, whether it was with parents, siblings, friends, or partners, and therapy was most effective when I was honest with myself about those relationships. There was no disguising that what I had said about someone in the privacy of the session was unflattering; but that never meant I was blaming that person for the problems I was addressing.

It can feel like that. I've certainly had that feeling myself: that I was being blamed for everything that had gone wrong in my partner's, parent's, or child's life. And it may, in fact, have felt like that to the one who seemed to be blaming me.

But that's not how good therapy, or even mediocre therapy, works. Therapy does involve a lot of listening, and much of what a therapist hears is how horrible other people have been to a patient. What makes it therapy--as opposed to catharsis--is that the therapist can then take what has been shared and reshape it, redirect the energy in constructive directions, help the patient develop new strategies for addressing the situation. Those strategies may ultimately result in a broken relationship: the goal of the therapist is, first and foremost, the overall well-being of the patient, even if that comes at the cost of a job or a marriage.

The point at which healing begins is the abandonment of blame in favor of ownership. When I can honestly say that, whoever may have contributed to my current situation, it is up to me to resolve it, then I am on the path to wholeness. People do horrible things. They take advantage of situations, manipulate others, exploit weakness, even behave sadistically; and all these actions contribute to the woundedness of others. For healing to begin, it is often essential to point fingers and blame perpetrators, and if possible, to make sure those perpetrators face consequences for their actions; but this can only go so far toward healing. If I never get farther than that, I will only ever be a victim. If I am to be a whole, empowered individual, I must take ownership of my own fate. To quote Terminator 2: Judgment Day, we have "no fate but what we make."

We begin making a better future when we take ownership of our path out of whatever our present may be. That is true of every challenge we face, whether it is having a voice in a meeting, surviving an assault, transcending a vocational obstacle, or emerging from a divorce with our sanity intact. Revisiting the event, dwelling in the past, hanging onto the hurt and the blame, is a trap. Moving into a future of healing, wholeness, and love begins with ownership.
Labels: blame extravert introvert ownership sense of the meeting therapy
Location: Portland, OR, USA