Your Tent's Too Big (or, Fred Meyer Philosophy) 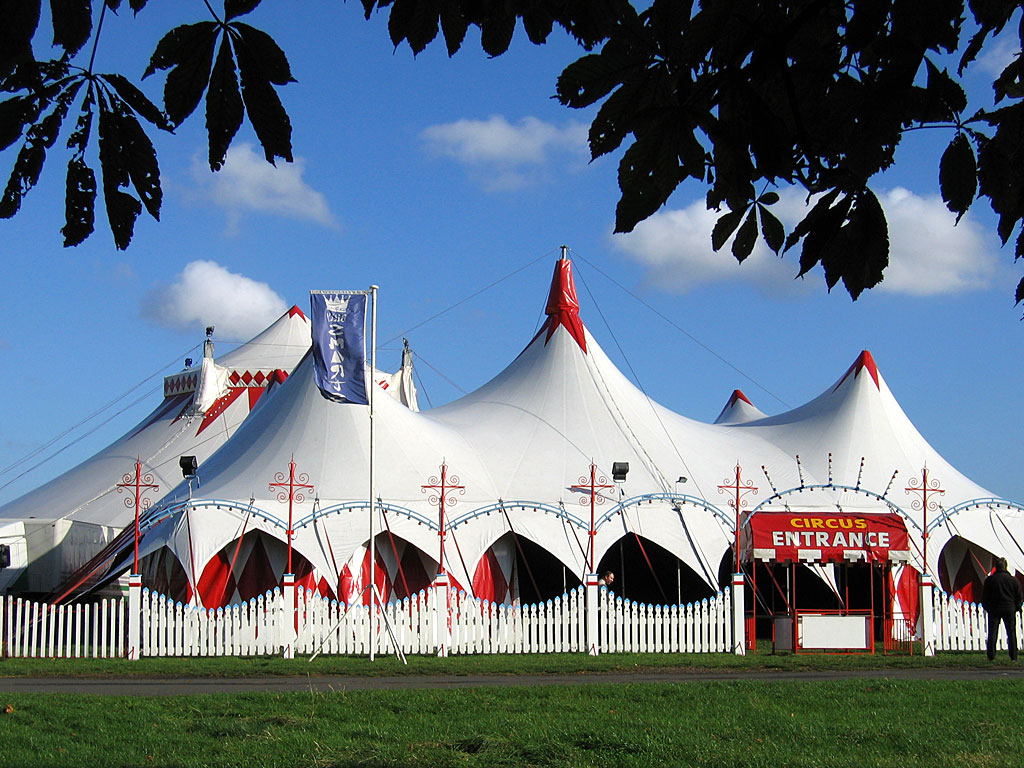 Until recently, the Pacific Northwest lacked cities big enough to support boutique retail outlets. Most municipalities relied on a single store for most of their purchasing needs, and in many of those towns, that store was Fred Meyer.

I first encountered a Fred Meyer store when I was in high school, and my family would drive into Corvallis to do our shopping. If we just needed groceries, we'd hit the local IGA or Safeway, but if we needed groceries, clothing, hardware, pharmaceuticals, electronics, toys for the kids, and so on, and wanted it all under the same roof, the place to go was Fred Meyer. At first I loved shopping there, but as I became an adult and my needs became more specialized, I found myself frequently frustrated at the limited selection available at whichever Fred Meyer I was visiting. They simply couldn't afford to stock shoes for my extra-wide feet, records of obscure classical works for my esoteric tastes, or books by even more obscure science fiction authors. Again and again, I found, Fred Meyer was a place where you could find "a little bit of everything, but not much of anything."

Three decades later, looking back on the institutions I've been involved with, I realize that this big tent approach has been applied to far more than just retail. Thus in the 1970s and '80s, the Republican party presented itself as a "big tent" party, with room for people with views from across the political spectrum. The Boy Scouts, too, adhered to the notion that it was, aptly, a "big tent" youth organization, welcoming boys regardless of their ethnicity or religious affiliation. This was also very much the case with the United Methodist Church, members of which held views from the radical to the conservative, and which had congregations representing a vast sweep of ethnic and theological distinctions.

Beginning in the late 1980s, though, this began to change. Forces within the Republican party began drawing ideological lines of exclusion, particularly on cultural issues: abortion, homosexuality, immigration, legalization of marijuana, taxation, and more. As the years went by, fewer and fewer Republicans could afford to hold views that differed from those of the party's base. Moderates were forced out of their seats in primaries, defeated by more doctrinaire candidates, and it didn't seem to matter to the base that this often meant defeat for the party in the general election. Over time, the strategy was successful enough that it has now forced Congress into perpetual deadlock, with the party's radical right wing holding the capitol hostage.

Similar developments in Scouting led liberal leaders and youth to protest a growing intolerance toward minority beliefs, particularly with respect to homosexuality. I personally experienced a right-wing religious tilt when I accompanied my son's troop to Scout camp in Idaho ten years ago, and found the mostly Mormon camp staff oblivious and insensitive to the dietary and religious needs of non-Christian Scouts. This ongoing shift toward fundamentalism ultimately led me to walk away from Scouting, despite the progressive views of Sean's Scoutmaster.

The institution that has most troubled me in this regard has been the church that fostered my spirituality: United Methodism. When I was in seminary, the UMC was still justifiably proud of its diversity. "In all matters not essential to salvation, we Methodists think and let think," the church proudly proclaimed. Diversity was alive and well at Perkins School of Theology, on the campus of Southern Methodist University in Dallas, Texas. The seminary devoted weeks to every one of its minorities: African-American Week, Hispanic Week, Women's Week, and, yes, Evangelical Week. It's telling that, even in the heart of Texas, Evangelicals considered themselves a minority at Perkins.

Evangelicals do not enjoy being a minority. Worship in the seminary chapel was loudly criticized by the Evangelical caucus as too "high church." Evangelicals complained that professors were too dismissive of their beliefs, that they disrespected orthodoxy in theology and Biblical interpretation, and promoted heresy in their lectures. This tension reflected a growing storm within the national church, concentrated in a conservative wing calling itself "Good News." Good News was the 1980s-90s Methodist equivalent of the Tea Party. It lobbied to close loopholes that allowed sexual minorities to be ordained, pushed for legislation requiring all pastors to use sexist language, and fought to replace the pluralistic official theological statement with a far more exclusionist alternative. Over time, it made consistent gains, its power growing with each succeeding quadrennial General Conference. Thanks to the increasing presence of delegates from the Third World, who tend to be much more Evangelical in their views, conservatives have a lock on General Conference that may take generations to break.

It's not enough for these conservatives that the law book of the UMC, the Discipline, has become a document by and for Evangelicals. General Conference has moved repeatedly to punish those individuals, congregations, and conferences who would dissent from the hardline provisions of the Discipline, putting them on trial, suspending them, reducing their representation at the national level. As a result, United Methodism has ceased to be a big tent, Fred Meyer denomination. In its place there is a segregated tent in which any who will not join the orthodox chorus are gagged or thrown out. It's becoming a boutique church. If it was a storefront, it might be called "All Things Evangelical."

For many years, West Coast and Northeastern Methodism took this marginalization lying down. There were increasingly vocal protests at General Conference, but they never succeeded in putting the brakes on the evangelicalization of the denomination. Finally, a year ago, a retired Bishop, Melvin Talbert, called for an institutional protest movement at the Western Jurisdictional Conference. This year, almost every conference in the jurisdiction--which geographically encompasses more than half the United States--has signed on to the "Statement of Gospel Obedience," a document that insists United Methodists are called to a higher law than the Discipline, one which embraces all sexual orientations and includes them fully in the life of the church, both ordaining and marrying them.

The outcry from the church's conservative majority has been fierce, but I have not yet heard of any uptick in church trials, though it's probably just a matter of time. The wheels of Methodism grind slow. I've been disappointed to see statements from Bishops on the matter that continue to bury their agreement with the Gospel Obedience movement in carefully nuanced ass-covering legalese. While this is not true of retired Bishops, who have nothing to lose, it just reinforces my belief that the best way to silence a radical Methodist is to make him or her into a Bishop.

Full inclusion of sexual minorities within American secular culture is gaining momentum. More and more states are passing marriage equality laws, and with the Supreme Court getting out of its way, it seems likely that this shift will be irreversible. For this to happen in United Methodism--and in all the other mainline Protestant denominations--it will take a concerted movement of ecclesial (as opposed to civil) disobedience. More pastors will have to risk discipline by performing same-gender weddings, and when they are prosecuted by the church, their trials must be made into national news events. But that will not, I am sorry to say, be enough. To really bring this crisis to a head, it's going to take episcopal disobedience: Bishops are going to have to put their jobs on the line and openly, in plain declarative language, refuse to prosecute pastors for performing gay weddings and, even more tellingly, proudly ordain gay and lesbian ministers.

Pastors on trial is becoming old hat, yesterday's news. A Bishop on trial--now that can't help but be high profile. If enough of them can summon the courage to do this, to risk losing their power and authority in the service of the better good, it may finally move the church off its stubborn and shameful refusal to honor diversity.

And if it does not? Perhaps it's time to acknowledge the tent's not as big as it used to be, that, in fact, many of us have been pushed out into the cold by the selfish hard-liners who prefer to keep the tent to themselves. It struck me at least ten years ago that the biggest barrier to moving the church is the word "United." As long as we idolize our unity, we Methodists will continue to sacrifice our gay and lesbian brothers and sisters to preserving it.

If staying United means marginalizing, denigrating, and losing those of us who are gay, then to hell with unity. With reference to the institution of slavery, Abraham Lincoln wrote these words in 1858:

As I would not be a slave, so I would not be a master. This expresses my idea of democracy. Whatever differs from this, to the extent of the difference, is no democracy.
The Kingdom of God, as described by Jesus, is a place and a time in which the tables of power are reversed: the poor and oppressed are fed and clothed, the rich sent empty away. Any church that claims to be of God, yet works to concentrate power among those who have held it for generations while marginalizing and persecuting those who merely wish to participate in its ministries, is no true church.

Almost three hundred years ago, John Wesley grew dissatisfied with the ossification of the Church of England and sought to reform it from within. When that proved impossible, he grew his movement outside the church and, upon his death, it became a church of its own: Methodism. We've been trying to reform the American branch of that church without success for far too long. Let's follow the example of our founder, and step outside this far too small tent, and pitch our own.
Labels: big tent Fred Meyer homosexuality reform schism United Methodism
Location: Portland, OR 97229, USA