- August 22, 2013
We expected charismatic megafauna. That’s why we took bear spray, attached bear bells to our packs, put our food in a bear can, put anything else that might have any attractive odor to it at all in a bear bag and hung the lot from  a tree. It’s also why, even with the bear spray, Amy insisted on sleeping with one of her trekking poles, as well, which she dubbed “Pokey.”


As much as we didn’t want to see a bear, Amy wanted badly to see a moose. Three years ago, when I first took her to Idaho and we made an abortive trip to Yellowstone (the roads in May were just to icy for comfort), she left disappointed. Coming up the canyon trail, we’d met many other hikers on their way out who’d talked about how many bears and moose they had seen.


We saw neither. A young hiker we met on the way out pointed to a pile of manure on the trail and announced it was moose scat, but given the number of horses we encountered, I rather doubt there were any antlers involved in the production of that fecal matter. 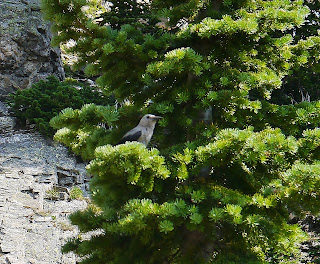 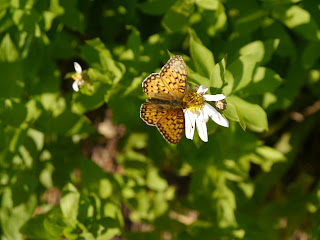 Even without the megafauna, we were not alone on the trail. There were the marmots, which I dubbed “midifauna” as they dashed away from us, their tails spinning comically. There were squirrels and songbirds—“minifauna.” And there were butterflies, “microfauna,” more varieties than we’d seen in one place outside of the Oregon Zoo exhibit, fluttering from flower to flower, pollinating with wild insect abandon; not to mention honeybees and bumblebees.


All these critters—birds, rodents, butterflies, bees—had animal charisma, evoking wonder and delight. The closest encounter I had with a creature, however, was with a decidedly non-charismatic yellowjacket, which stung me on the ankle as we were hiking on the plateau near The Wedge. Biting flies plagued us on our hike up the canyon to the point that we applied some potent insect repellant. At the lake where we made our second camp, mosquitoes led us to again apply the bug spray. The Wyoming wilderness is a wondrous place, but it does have its fair share of pests. 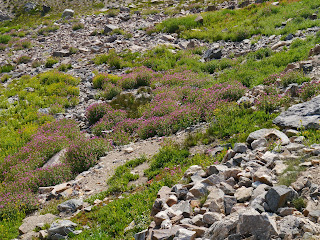 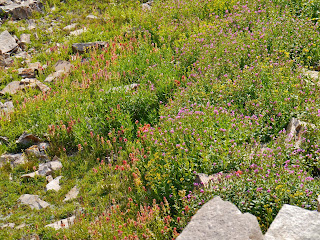 Making up for the lack of iconic megafauna were charismatic flora: wildflowers of every color imaginable, whole fields of yellow, purple, blue, red, and white. The larger flora did not impress nearly as much, but then, having so much experience of the rainforests of Oregon and Washington, we’ve become used to true megaflora, magnificent trees that shoot hundreds of feet into the air. In the Rockies, by contrast, trees are skinnier, shorter, even stunted. That doesn’t mean they’re lacking in strength: as in Utah, some of these slim trunks are hundreds, perhaps thousands, of years old. On the canyon trail I saw an aspen that had fallen across the trail and had been cut away by a ranger, and was stunned by how many rings I could see in a trunk I could encircle with the fingers of one hand. At our campsite we slept under a juniper that may have predated the presence of humans on this continent. And on our hike around the basin, the higher we climbed, the smaller the firs became, until they looked almost like bonsai trees: tiny yet mature, Christmas-sized pines that are probably older than I am.


It’s the lesson of life, a lesson I first internalized in Death Valley, where I saw marsh grasses growing out of Badwater, a brackish pond located at the lowest, hottest point in the United States. Life is a powerful force, a presence that inserts itself into the most hostile places imaginable. Life adapts, transforms, evolves, always seeking a way to triumph over adversity, to be fruitful, multiply, create a new generation to replace the old.

We were in this wilderness at a peak moment in its annual life cycle. Spring in the Tetons comes in August, and it comes profligately, in brilliant colors, giddying aromas, every living thing competing with every other living thing for the opportunity to create a new iteration of itself. The flowers, the insects, the birds, the squirrels, the marmots, all are exulting in the warmth, drinking deeply of the runoff until the streams run dry, pollinating, propagating, ejecting seed pods, laying eggs, gestating and birthing and nurturing while they can, before the early winter snows hit and it all grinds to a halt.


And in that winter dormancy, the trees carry on, laying a new ring so thin as to be nearly microscopic, some of them resembling driftwood more than living things.


Someday these trees will die, but it will not be soon. Unlike the redwoods and sequoias, the towering first of the coast, they have remained small, compact, braced against winds that would topple a Californian giant. Conserving resources, they live on, season upon season, year after year, surviving even wildfires.


There are many lessons to be learned from these trees, lessons I’d be happy to share; but not here. I am happy, instead, simply to marvel at the beauty I beheld in even the smallest things in the wilderness, and to hope that my life may be just a little as durable and colorful as theirs. 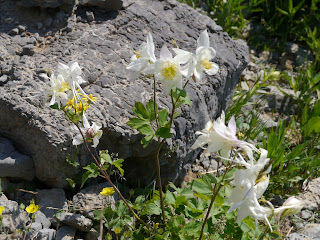 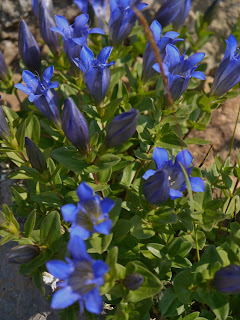