Two Miles High, Part I: Smoke Gets in Our Plans

It was August, 2007, and I was grieving.
I'd been engaged for almost a year, but it was becoming clear to me that relationship was coming to an end. Marriage plans had been indefinitely postponed, and finally the decision had been made to put the engagement on hold. There was a final vacation together, at Lake of the Woods, and then I drove my children back to Idaho Falls. Dropping them off with their mother, I pointed my car back west, with an eye to doing some solo camping at Pettit Lake, a beautiful alpine spot in the Sawtooth National Forest my family had visited many times in my childhood. There were some hitches in that plan: for the second time that summer, I'd gone camping without my tent; the road to the Sawtooths was blocked for several hours by a traffic accident; and once I finally made it to Pettit Lake, with the sun already setting, I found the campground both far more developed than it had been in my childhood, and all booked up. Undaunted, I drove into the night, searching for a campsite at an alternate location, finally found one, slept mostly in my car (it rained during the night), and the next morning, drove back to Pettit Lake to take a hike.
Pettit Lake is a lovely spot in and of itself, but I had a higher goal in mind: hiking up another 1600 feet, and five and a half miles into the wilderness, to Alice Lake. It was a beautiful hike, and I was rewarded with views much like this one: (I've been unable to find the photos I took that day, so you'll have to settle for something I found on the internet.)

Deeply moved by the beauty and serenity of the place, proud of my accomplishment at climbing that high, and suddenly intensely alone, I shed some tears, then decided to do something foolish: instead of going back the way I came, I would climb another thousand feet over the ridge and down to Toxaway Lake, continuing on through the rest of the loop for a total of eighteen miles. I had started fairly late in the morning, and I had only a day pack, a few energy bars, a water bottle, a wind-up flashlight, and an iPod, but I had something to prove to myself. The climb over the ridge was far more difficult than I had imagined. It wasn't the grade so much as the altitude: I just wasn't acclimated, and it had been years since I'd been in marathon condition. The Toxaway portion of the hike went on far longer than I had expected--I was, after all, less than a third of the way through the loop at Alice Lake--and I refilled my water bottle from streams, risking giardia with every gulp. It was also far less scenic than the climb up had been. My feet began to hurt. With two miles to go, I encountered the final insult: I had to climb up again, and make my way across a forested hill as the sun set and was replaced with a moonless night sky. I had to wind the flashlight almost constantly. Finally emerging from the woods, I stumbled down the final stretch of trail to the parking lot, waded into the icy lake to rinse the sweat off, and drove away to find another campsite and a bitterly cold night on the ground.
All of this is prelude is about how my lonely solitary re-singled self did something foolish, and crammed three days' worth of hiking into a single long afternoon with inadequate supplies. I'm lucky I didn't die of exposure. In the center of it was Alice Lake, an incredibly beautiful place that, once I'd seen it, made me want desperately to do it right: with a backpack, taking my time, and most definitely not alone.
Six years later, happily "mountain married" to Amy, with two backpacking expeditions under our collective belt, and wanting very much to see my kids before the summer was over, I concocted a plan: drive to Idaho Falls, a little earlier in August than I did in 2007, spend two days there visiting, then come back, as before, through the Sawtooths, stopping to spend  three days backpacking the Toxaway Loop, this time starting on the less interesting side, climaxing the second night by camping at Alice Lake, where we could happily watch the sun set, perhaps have a campfire, and awake the next morning still at this incredible place. Amy was amenable, so off we went.
Passing through southern Idaho on I-84, I noticed an ominous cloud over the mountains. Here's a picture I took of it on our way back, at the end of our trip: 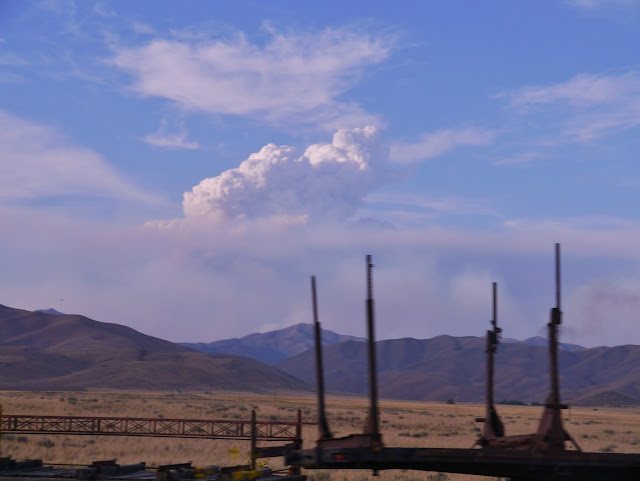 I spent six years of my childhood in Idaho, and most of my adolescence in the Willamette Valley. I'd seen clouds like this before. This was no thunderhead. Somewhere in the mountains there was a huge fire burning, and I knew it wasn't a field burn. The location, the size, the color, all told me it was a wildfire, and it was right where we wanted to be in two days' time.
We were late getting into Idaho Falls, but we were still able to spend plenty of quality time with my kids the next day. When we weren't visiting with them, I was on my phone, scanning through reports of the situation in the Sawtooths: two wildfires were burning almost unchecked. I called up the Sawtooth ranger station in Stanley, the closest community to Pettit Lake, and learned that while the Pettit/Toxaway area was not at risk of catching fire, it was extremely smoky in Stanley. The ranger told me it could very well be better at a higher elevation, but she couldn't guarantee anything.
I didn't like the sound of this. Moving through smoke is no picnic at sea level; nearly two miles up, it could be a nightmare. We found an outdoor outfitter in Idaho Falls, and asked for suggestions of alternate routes in the Sawtooths. The storeowner showed us some possibilities on a map, but told us there was no way of knowing whether we'd have clean air on any of those hikes. He thought for a moment, then said, "Have you ever thought about the Tetons?" I told him I've admired them for most of my life, but we had a lot of driving ahead of us at the end of our hike, and I wasn't looking forward to adding a couple more hours to it by driving into Wyoming. He laughed. "Most people don't realize the Tetons can be accessed from the Idaho side," he told us, and produced a map. Sure enough, there was a trailhead north of us in Driggs, Idaho. "Two and a half million people visit the Tetons every year starting in Jackson Hole. Thousands do it from Driggs, and for my money, it's a better hike on this side, anyway."
We conferred quickly, bought the map, and suddenly we had a very different adventure ahead of us, one I'd wanted to take since 1979, but hadn't even considered a possibility until now.
I probably saw the Tetons as a child, but it wasn't until I was 18 that I got a really good look at them. That summer my family drove to Idaho for a wedding, at the cost of me missing my final chance to attend an arts camp that had been my touchstone the previous two summers. I was in a sour mood over that, nervous about our upcoming move from Philomath to Harrisburg, and far more nervous about starting college in the fall. Seeing the Tetons changed all that: here was mountain grandeur as I'd never experienced it before. I wanted to see more. We camped in the National Park, but that did little to improve the view: campgrounds rarely afford the views that make iconic landscape photographs. We went on from there to Yellowstone, each experience underlining how much I was being held back by my family--something I'd somehow managed not to notice, despite being at the perfect age to resent their presence in my life. Taking a nature walk at a hot spring, I made myself a promise: I would come back to these places when I was older and better equipped, and really see them.
Over the years, I did make it back, but until this year, I was never equipped with all the right gear or, far more importantly, the right partner. But now I have her, and the longer we are together, the more intensely we want to experience the outdoor wonders we were denied in our younger adulthood by the realities of childrearing or of marriage to a recalcitrant spouse. Conditions are right now--we were, after all, planning to backpack in the Sawtooths--and so we adjusted our plans, shifting from splendor to spectacle. And so begins my telling of this, our latest adventure. I took more than 200 pictures, and will share the best of them along with the story of our hiking, climbing, and camping in a place so wondrous it had me weeping before ever we reached a destination. Stay tuned.