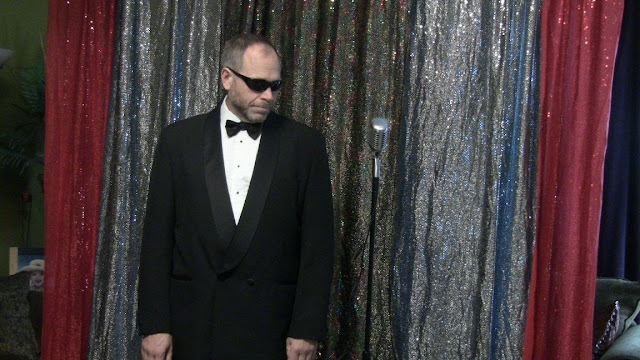 I don't love the camera.

This goes back to my earliest memories of being photographed. Pictures taken of me in my infancy are typical baby shots: a happy, smiling, inquisitive child utterly ignorant of the significance of the metal box in my father's hands and its ability to capture my image on film. But from the moment I became aware of what the camera was for, and why it was always being pointed at me and (by then) my younger brothers, my face lost its ability to smile naturally for a picture. Making myself smile for a posed shot, I could always tell there was something wrong: my eyes were too wide or too narrow, my mouth not open enough or frozen in a death grin, my nostrils flared like Wolverine sniffing for a supervillain. Try as I might, I just couldn't relax and let my face do what it would normally do if I was enjoying an episode of Batman, reading an elephant joke, or singing "On Top of Spaghetti."

School pictures came out terribly, as I knew they would. I tried teaching myself to smile on command, practicing with a mirror, but it all seemed clownish to me. By the time I was a teenager, I had concluded that smiling for the camera was a lost cause. I'd do it, but I knew the result would make me uncomfortable. I just wasn't meant to be photographed.

I make no pretense to extraversion. I am very much an introvert: I prefer listening to speaking, and while I enjoy socializing, I'm also happy sitting here on the couch writing this blog. With that said, there is a difference between introversion and shyness.

Introversion is about energy: alone time recharges my batteries, while socializing requires effort, and can be taxing. This doesn't mean it's a bad thing; as an endurance athlete, I enjoy working out. Parties are like psychic workouts: tiring, but exhilarating. Shyness, on the other hand, is about fear: I'm afraid you won't like me, or I'll embarrass myself if I say anything, so I stay in my corner. Being shy in a social setting drains my batteries for more rapidly than interacting with others. It's like trying to ford a rushing river without paying any attention to the current: you might get through it, but you'll be exhausted. Let the river push you a little downstream with each step, and when you reach the other side, you'll still have the energy to continue hiking. Sitting in a corner, blowing all my energy to create a shield against the chaos, makes me tired, miserable, and desperate to get out of the party.

Being photographed froze that dynamic in time: the rictus smile, the deer-in-the-headlights eyes, are visual equivalents of my shyness bubble, which makes every one of those terrible pictures a far more accurate depiction of that particular moment than a pleasant smile would have been. This kid doesn't want to be here, is desperate to get off the photographer's stool and away from the camera, so for God's sake, take the damn picture already!

It's taken middle age to finally ease my distaste for the lens side of the camera, but I still don't like the way I look when I pose a smile. I have, though, begun employing some method acting to camera sessions. I've come to know what whimsy and delight feel like facially, and by physically plugging into those feelings (and memories that evoke them), I can usually generate an expression that won't look too deranged.

Now that we've dealt with introversion and shyness, it's time to address the parallel states that inspired this essay in the first place: humility and modesty. The first is a virtue, the second a lie, and either can be generated by praise.

Case in point: Friday night I played keyboard for a ComedySportz show. We played two full-on music games during the show, one of them a sort of blues musical, the other a Twitter-like musical in which every song was about ten seconds long. I also threw in my usual dashes of musical ornamentation, underscored some scene games, provided musical clues during a guessing game, played the national anthem, and so on. After the show, an audience member sought me out to tell me how much she'd enjoyed my playing, as did one of the improvisers. To the audience member, my response was humble and appropriate: a sincere "Thank you." To the improviser, however, I replied along these lines: "Aw shucks, 'tweren't nothin', it's just what I do." That was modesty, and it was a lie.

Because it's not just what I do. I started doing this four years ago, and while I came into it with a lifetime's experience as a keyboard improviser, that's very different from being a partner in a CSz show. I've had to learn the skill our club manager, Patrick Short, calls "listening to the listener": feeling the right moment to begin a song, the comic beats of each scene, knowing exactly when to pimp a singer with a diminished seventh chord or a blues intro, sensing when a scene would benefit from some light underscoring, knowing where the player is taking a song, or providing enough musical cues that the player can hear where I think it should go to make musical, as well as dramatic, sense. I expect that if you were to take a brain scan while I'm doing this, you'd find me firing on all cylinders. I'm intensely present in the moment, and often once the game ends I will have little memory of what I actually did: there just wasn't any bandwidth left to record it. My goal as I do this is to be seamlessly a part of what's being created, to make it seem easy. And for me, it is...well, not really easy; it's more that I'm skilled enough that I can do it without having to think about it.

And that may be why my inclination when I receive a compliment for my playing is to feign modesty, to protest that it's nothing, it's easy, it's just what I do. I'm sure the perfectionist in me also plays a role, knowing exactly what didn't work in what I did (though I've become quite facile at turning those mistakes into "mean to do that" moments). But the most likely reason for modesty like mine is to make the complimenter think even more of me. "That was incredible, and he says it's just something he does? He must have amazing skills!" That's probably why I'm more likely to make the modest response when I receive a compliment from a fellow improviser, and why I really don't like myself much after I say it.

The best response, the truest response, the humble response, is far less complex ethically: Thank you. It's the verbal equivalent of taking a bow. It acknowledges that what I did had an impact on my audience, and it accepts their praise as sincere. Thank you; I so appreciate you for sharing your enjoyment of the performance with me.

This is true even--especially--if I've made some horrible mistakes in my playing. When I was a music major in college, most of my performing was on the trumpet. Many of those performances were in church: preludes, specials, offertories, postludes. In the beginning, I wasn't very good, and while I did improve, it wasn't until graduate school that I really mastered the instrument. However poor a church performance was, though--and some of them were real clambakes--I could be sure that afterward, people would praise me to the heavens, in response to which I would blush, insisting that it wasn't really that good.

At some point, one of these people took me aside and told me I should cut myself some slack and learn to say "thank you." The praise I was receiving wasn't, after all, about how I felt about the performance; it was about what the audience heard. Acoustically, churches are wonderful places to perform on a brass instrument: the liveness of the sanctuary smooths over much of the roughness. Emotionally, there is no more appreciative audience than a church audience. They are already predisposed to be grateful that someone has come and played anything for them; and if the performance moved them in some way, they will be effusive in their expression of praise. Brushing off that praise by insisting the performance wasn't really that good denies them the right to their own feelings, implies that they don't know what they're talking about, and rejects a gift freely and sincerely given: grace.

Grace tells me I'm valued, however undeserving I feel. Grace claps for my performance, holds my hand and tells me how beautiful it was, thanks me again and again for offering up my talents. When Jesus says that "people will be forgiven for every sin and blasphemy, but blasphemy against the Spirit will not be forgiven" (Matthew 12:31), I believe he's talking about rejecting grace. When I'm berating myself for missing a cue or blowing a run and someone sincerely says "thank you, you really moved me," that's as close as I will ever feel to the grace of God, the gift of the Spirit, and rejecting it is as blasphemous as a performing artist can be.

Once more, the humble thing to do, the gracious thing to do, is to smile sincerely (as opposed to a false camera grin) and say "Thank you." At such times, a blush is wholly appropriate, though unlike a smile, it's not something I can just turn on (though with my Swedish complexion, the problem for me is more likely to be turning it off). It's what I will continue to strive for as I respond to applause and praise after CSz shows, church services, and concerts. I won't always succeed, but when I do, I'll feel far better about the performance that elicited the praise, whether or not I feel it was deserved. More important, I'll feel better about myself, which will set me up to do even better the next time I'm on stage.
Labels: humility introversion modesty performance shyness
Location: Portland, OR 97229, USA