- August 18, 2013
Despite being unacclimated to the altitude, not yet broken in with our packs, and including the steepest climb, the first day was the easiest.

We crossed over into Wyoming and the Jedediah Smith Wilderness as soon as we left the trailhead parking area. The first 2.7 miles of the hike, through woods and meadow, were delightful. Every twist in the trail revealed new treats for the eyes. I discovered fat huckleberries, a trail snack I always cherish, as well as translucent red berries I thought might be a different variety of huckleberry, but which had a slight off taste that kept me from trying anymore. And yes, my mother did teach me never to eat something I found in the woods unless I knew what it was, but I'm still alive and well, so there.

As we hiked up Teton Creek, we had this view behind us: 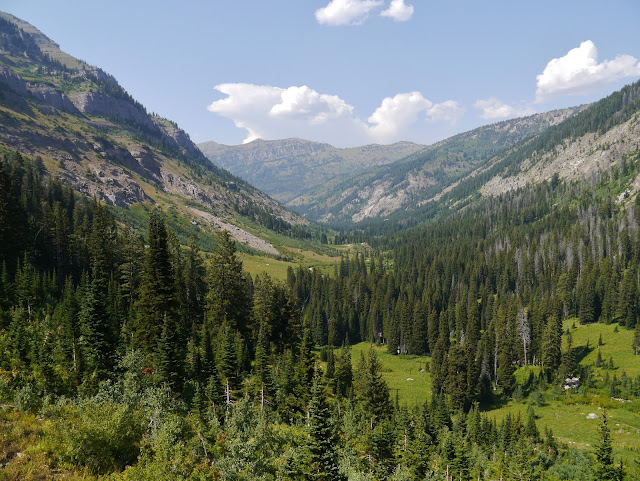 It's a view many a landscape painter would be proud to portray, but it was nothing next to what lay before us: 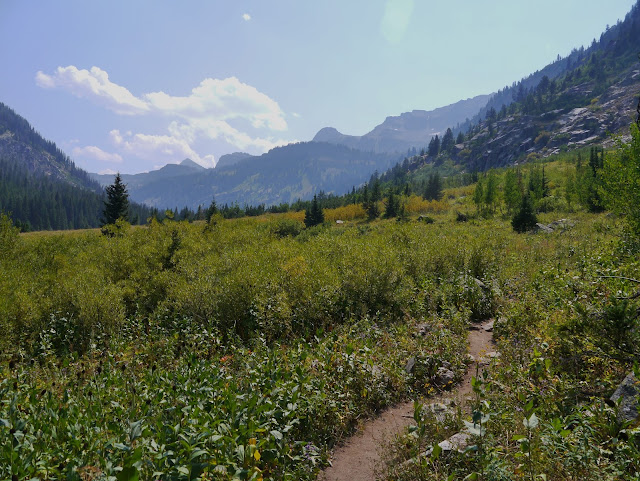 I had no idea at this time that I would be making intimate acquaintance with these distant peaks, but I already knew they would not disappoint.

The Devil's Stairs is a trail up from the valley to Mt. Meek Shelf, a total elevation gain of more than 1500 feet. The trail had plenty of switchbacks, just a few places where it actually felt like we were climbing stairs, and was not nearly as difficult as trails we've used to summit Elk Mountain, Dog Mountain, and Mount Defiance in Oregon. What made this trail was challenging was altitude: by the time we made camp, we were at 9500 feet. This made for slow going: climbing at nearly two miles of elevation with a 40-pound pack is very different from day-hiking in the Columbia River Gorge. It was hard work, we were both breathless, but at no point did we feel like this was undoable. 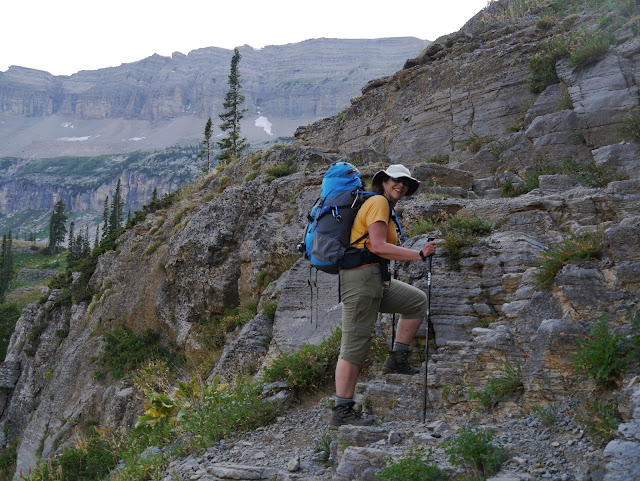 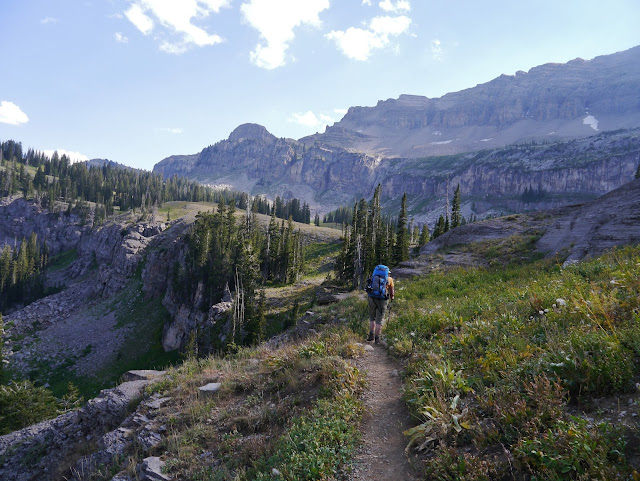 And sure enough, after about an hour of climbing, we were on top. The view was breathtaking; in fact, I had a "double rainbow" moment. Overwhelmed by the splendor all around me, deeply thankful for a willing, adventurous partner to share it with, I found myself misting up. I didn't realize until last night, as I was writing the first entry in this log of our trip, that there was a special symmetry to these almost-tears, that the pathos of Alice Lake was now being canceled out by the joy of the Tetons. There I was absolutely alone, attaining a geographical goal through individual grit and stubbornness. Here I was sharing the trial of climbing these diabolically named stairs, mutually supporting and being supported by my partner all the way up, and now had the privilege of telling her how much it meant to me that we could both be here, gazing across the Teton Canyon toward tomorrow's destination: 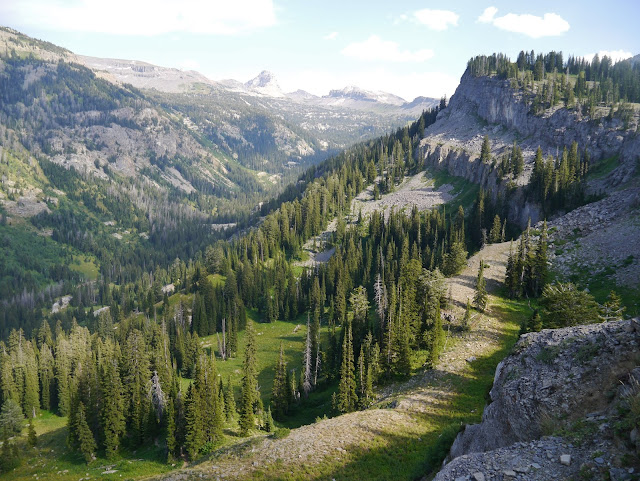 In 1989, I took my parents to St. Paul's Cathedral in London to attend vespers. The service was sung by a cantor and a boys' choir. At one point, I glanced over at my mother, and saw a tear on her cheek: the beauty of the setting, the liturgy, and most of all the music had moved her deeply. Like my mother, I have found myself moved to the point of tears by music, and I still find myself stirred deeply by some pieces, particularly when it is a children's choir performing them. Since 1995, though, landscapes have displaced music as the stimuli most likely to stir my emotions to a place of awe, of being in the presence of a beauty so overwhelming I cannot help but weep, of being profoundly grateful to whatever force in the cosmos has granted me the privilege of being alive in this moment, this place, to smell and hear and above all see such magnificence with my own senses. Sharing such a moment with someone I love makes it all the more special.

I wish I could say I stayed in that place for the remainder of the day, but that would not be true. Once atop the shelf, we took a wrong turn, and had to double back. We passed a beautiful alpine lake that was not on the map, and saw several young men who, having made camp, were now relaxing atop a huge glacial erratic rock in the middle of the water. We pushed through meadow growth gone wild, exulting in the brief high altitude summer by putting out brilliant red, yellow, purple flowers. At one point, I cried out angrily as a yellowjacket stung me on the ankle; fortunately I'm blessed with an immune system that does not overreact to insect venom, and the swelling was almost gone by the time we stopped. But now it was getting later, the shadows were lengthening, and we discovered that one of the streams we'd planned on camping beside had run dry. Finally we heard water again, and as we continued to climb up the gentle slope of the shelf, found another brook; but this was not enough: we also needed a stand of trees to hang our bear can.

Yes, bear can. All our food, most of our toiletries, and any clothing that had had contact with anything fragrant had to be suspended at least ten feet in the air, four feet out from whatever tree we were using. This proved problematic, as most of the trees at this level were far too skinny to provide the necessary branches. We finally found a spot, though--or, rather, three spots close enough to each other, one for the tent, another (a large rock) for our cooking and eating area, and a grove of trees for the bear can. There was much climbing up and down from the stream where we were camping to the rock, then across to the tree, much sorting of items, a freeze-dried meal, a chocolate bar, and finally, in the dark, a rope thrown across a branch, then two stuff sacks hauled up into the air. By now we were tired, cranky, and very ready for bed; which is precisely where we went.