But You Can Never Leave

Welcome to the Hotel Medford.

Actually, it was a rental cabin located in the hills above Jacksonville, and we only just grazed Medford a couple of times for a Harry & David run and a burger at Jasper's. But all the time we were in the Rogue Valley, I was keenly aware that, once again, I was in a place that had been both traumatic and formative, and that I was there voluntarily.

Medford was where I learned I could not truly come home to Methodism in Oregon. It was where the family demon of authority issues dragged me into a depression so deep that I finally acknowledged it was a problem for me; where injuries sidelined me from running for the first time since I took up the sport; where my first marriage headed up the ramp toward divorce; and where my son Sean was born, and nearly died. All this happened over the course of less than a year.

It was also, and remains, an incredibly beautiful place, a part of Oregon that has a character and culture all its own, that fosters the arts as nowhere else in the state does, a place where I should have been happy to settle, if only I hadn't been in the wrong career and marriage. My chief memories of that time--July 1991-June 1992--are of anxiety, fear, and sadness. As with Emmett, Idaho, I couldn't wait to get out of there. 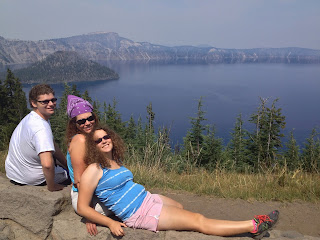 What a difference 21 years can make. That number amazes me every time I look at it: that's 21 years that have turned the baby who wasn't supposed to survive the night into a strong, healthy, sweet young man who has at least three inches of height on me. Those 21 years include the end of my marriage, my second marriage in its entirety, the end of my ministry career, floating for two years, finally settling into teaching and becoming--and this really amazes me--established and even sought-after, despite a two-year recessional layoff. 21 years that encompass the entirety of every adult relationship I've had save the first, and even that one is still part of this period. 21 years that include five marathons and my introduction to skiing, backpacking, comedy, and these three people.

Medford was a refiner's fire. It seared me, broke me, injured me so deeply that the healing would take...21 years. Places like this one, experiences like those I had there, shape us in ways we cannot know for years to come. I have often wished these things had not happened to me, that I had waited longer to propose marriage, had seriously considered staying in England, had questioned the decision to put both my wife and me on the same church staff, had waited a few months longer to agree to having another baby. But there is not point in grieving over these things. The choices were made, the consequences experienced, and I am who I am because of them.

I have understood all this conceptually, have known deep within myself that I can no more give up my formative experiences than I can my DNA, that if anything I owe a debt of gratitude to all these places, however dark they may have seemed to me while I was there. As much as I may have an intellectual appreciation of the importance of such places, redeeming them with new memories has come hard for me.

Until Amy said, "I've never been to Ashland." And just like that, we had a final vacation for the summer. 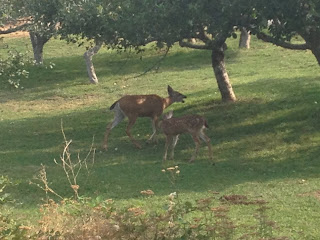 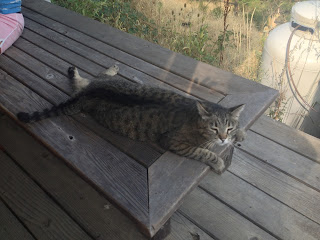 Our cabin was lovely, in a spectacular mountain setting, isolated from the road, surrounded by fruit trees that drew both deer and jack rabbits, frequented by a persistent tabby. There were also friendly dogs, but we saw very little of them. On our first day we drove into Ashland and saw The Taming of the Shrew, my first experience of the Oregon Shakespeare Festival in 38 years of calling myself an Oregonian. We were all delighted by it, amused by the contemporary staging, astonished by how fresh the 400-year-old dialogue felt, delighted by the performances, amazed at how good our seats were. It left us wanting more, exactly as a good play should. By the time we finished our ice cream and got on the road, the Rogue Valley was well on its way to redemption. 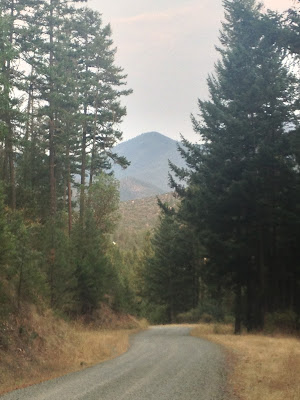 The following morning, I woke Alex up for a run. Medford was a place where I had to patiently wait through a long spell of plantar fasciitis, taking several months off; but by mid-winter, 1992, I was finally managing to run again without pain, especially on soft surfaces. One of those surfaces was the road up Roxy Anne Butte, a small volcano that overlooks the city. When I arrived at our cabin in the wee hours of Tuesday morning, I was coming off a two-week break from running due to tendonitis, but I was eager to give it a try here. Roxy Anne was too far away, but there was a small mountain behind the cabin that had seized my interest, and I wondered if there was a way up to the top. I led Alex up the driveway, out onto the asphalt, through some rolling hills, and then found what I was looking for: a sign marking the dirt road up the mountain I was now going to climb. I tackled it. Alex chose to walk after awhile, but I pushed up, higher and higher, until, glancing at my watch, I realized I'd been out longer than I should, and reluctantly turned back. I did pause to take pictures, discovering as I did that here, as in the Tetons, the morning sun was being tinted orange by wildfires. My legs worked just as they had two decades earlier on Roxy Anne, powering up the hill, my stride-length shrinking as I kicked into my climbing gear. For much of my adult life, running has been my drug of choice, my preferred way of purging darkness from my soul, energizing my spirit, empowering me for the day ahead. 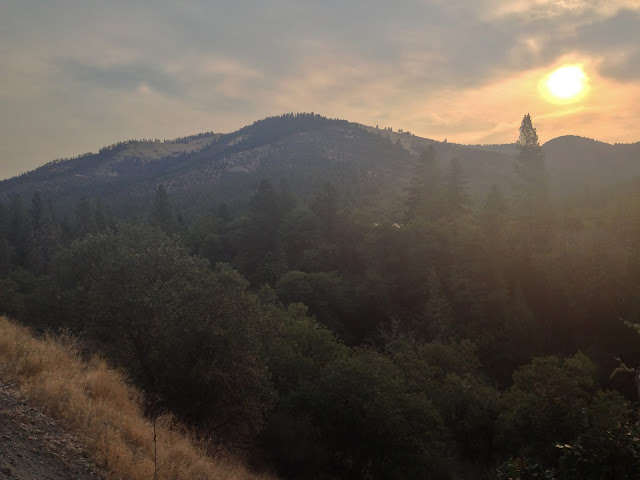 With the morning run complete, we climbed in the car and made for Crater Lake, a place I had been to many times, but which neither Amy, nor Alex, nor Sarah had ever been to. The lake was as lovely as I've ever seen it, the water still, perfectly reflective, the sky--well, the sky was not as blue as we wanted it to be. The smoke from the wildfires had settled over the lake, casting a grey pall over its lovely visage, so this is what we saw: 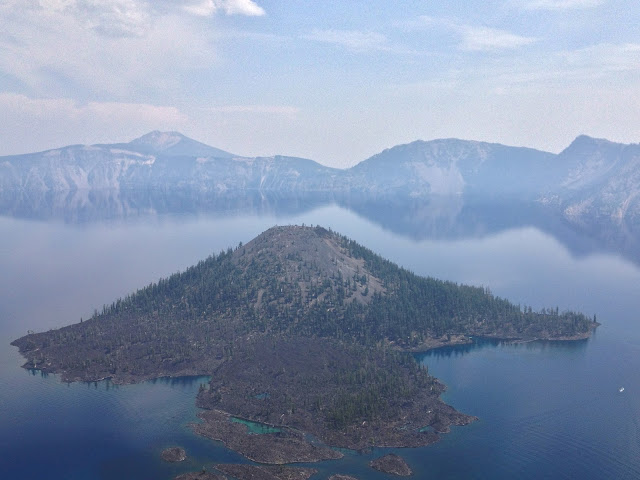 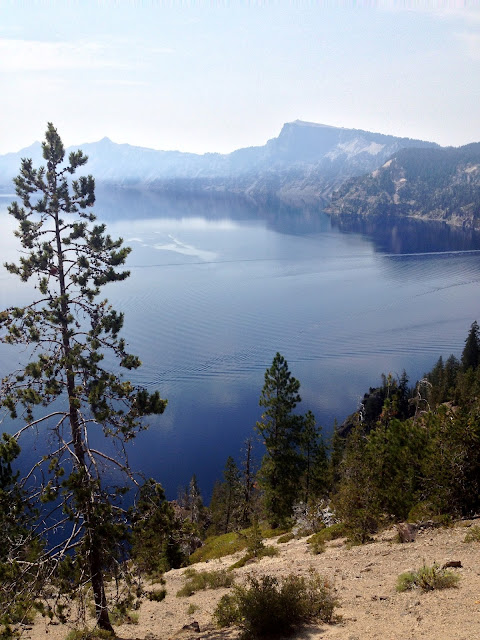 It was a long drive around the rim, a longer drive back down to Medford, and we were all cranky by the time we got there--a mood greatly relieved by the meal we shared at Jasper's, a hole-in-the-wall gourmet hamburger restaurant that is justifiably popular.

We pulled back into our cabin, played cards, bedded down, and the next morning, headed north.

Was Southern Oregon redeemed for me? You will have to read my next post for the answer.