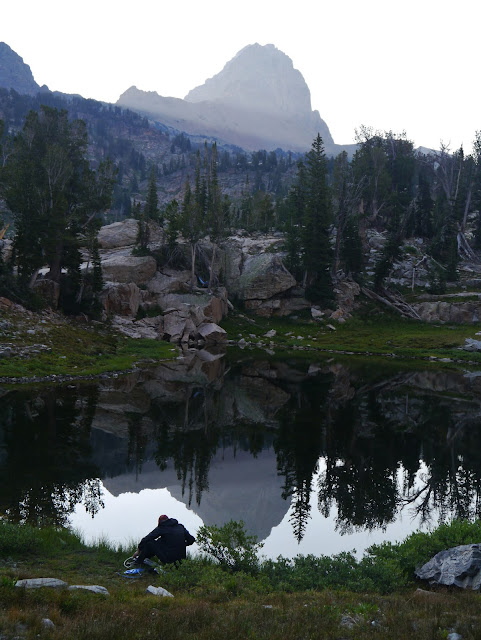 
I knew we had many miles to go before we slept. I figured that it would take us about four hours to cover the 7.7 miles to the trailhead, then another hour to drive to Driggs and have a quick lunch. It would then take us, according to Google maps, seven and a half hours to drive through the Sawtooth Mountains to Emmett, Idaho, where I had booked us a room in a bed and breakfast called the Frozen Dog Digs.


This was the fourth time we had broken camp as backpackers, and we worked efficiently, filtering water, deflating air mattresses, compressing sleeping bags, retrieving bear bags, eating a quick breakfast, and finally loading the packs, which were inexplicably bulkier than they had been two days before. By the time we hoisted them onto our backs and set off, with one final glance at Buck Mountain’s reflection in the lake, it was 8:30. 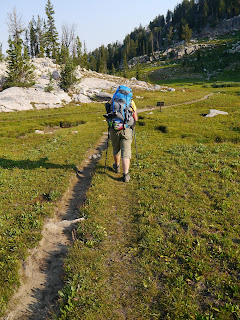 The Teton Canyon Trail had a steeper descending grade than I had expected. The Alaska Basin is, after all, lower than the mesa upon which we had camped on our first night, and we would have five miles to descend to the point at which the Devil’s Stair branched away from the Canyon Trail. The trail was steeper than I had expected, and there was a lot of descending. We’d get to the level of the creek, and I’d think we were set, that it would be gentle from here to the end, but then the trail would separate from the creek, the sound of water would recede, and before we knew it we’d be on another set of switchbacks. I came to resent every twist of the trail back toward Buck Mountain: it felt like backtracking, losing some of the horizontal distance we’d made up. 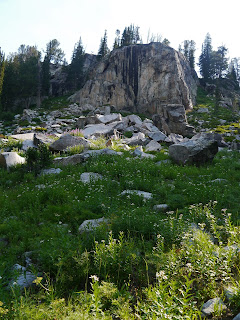 We stopped for a Clif bar, dropping the packs for a few minutes. We paused at a huge pile of manure, which some boys headed up the trail told us was moose scat, though it looked like horse to me. We stopped again, for a longer break, at a lovely waterfall, having another snack, enjoying the amber water pouring over the rocks and into a pool I would gladly have soaked me sore feet in had I not been so eager to finish this hike. 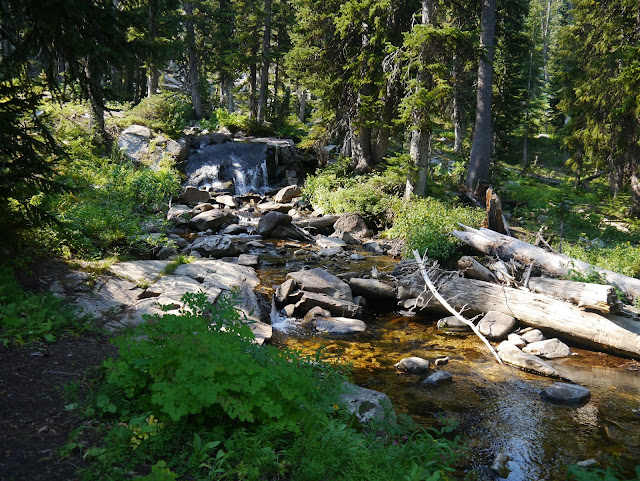 On and on we hiked, vigilantly watching for the one milepost that would tell us we were really making progress: the Devil’s Stairs. We stepped off the trail to let a horse party pass, and asked them how far it would be to the junction. “About a mile,” said one of the riders. It seemed a very long mile. We came across another horse party, this one made entirely of women, surprising one in the act of relieving herself. I quickly turned my back to give her privacy as she hiked her jeans back up. “How far is it to the junction?” asked Amy. “Just a few more switchbacks, and you’re there.” It took us longer than we expected to get to those switchbacks, but finally we came to it, dropped our packs for one last time, and snacked on trail mix.


A youth camp leader we had passed several times—he was always either waiting for one of his charges to take a potty break, or hiking past us, said charge in tow—walked past us once more, telling his young party that it was just two more miles to the trailhead. I had seen the sign—it said 2.7—and assumed Amy had, as well. In fact, she had latched onto the number two, and having it in her mind made the remaining distance seem far longer than it actually was. 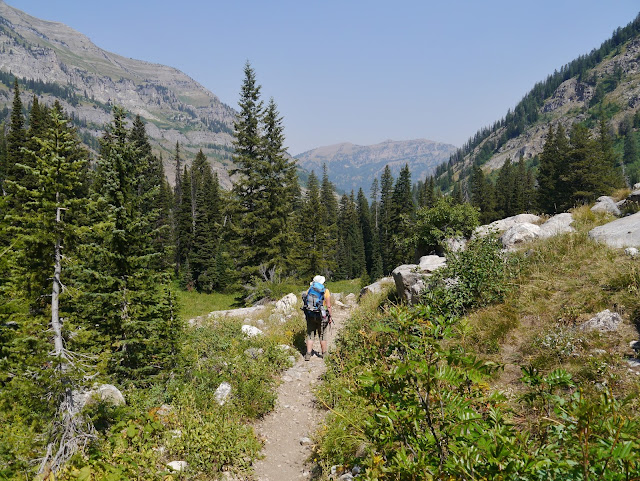 I began counting my paces now, a practice I employed in my early years as a runner. I was counting on about 1000 paces per mile, but as it turned out, that was far too optimistic. When I told Amy what I was doing, she began asking me regularly for an update. “800.” “1200.” “We just broke 2000.” Amy was having a great deal of pain in one foot, and was pausing frequently to rest that foot. But she was too driven to take another real break. Had she known about the extra 0.7 mile, she might have considered it, but she was stubbornly, fiercely dedicated to finishing.


The views continued to delight me, both fore and aft, and my camera was frequently out. Whenever I paused to frame a picture, Amy would get ahead of me, and I’d have to walk briskly to catch up with her. The last few miles, my photography fell off, until it was debatable whether I should just stuff the camera in my pack rather than keep it swinging from my neck, the buckle on its strap scraping every step against the buckle on the chest strap of my pack.


We heard voices approaching, and had a flash of hope that it might be the parking lot. No such luck: it was day hikers relaxing in the shade of an enormous boulder I remembered passing on the way in. We crossed a wide bridge, and I checked my memory as to how close to the trailhead it was. My memory was wrong. Every twist in the trail we hoped to see the end in sight, only to have more trail lying before us. The trail had become a merciless flirt, always hinting at conclusion, but never delivering. We passed some day hikers who assured us it was not far. We passed more of them. Still no end.


I saw the toilet first. A minute later, we were there. Heaving the packs into the car, swapping boots for sandals, filling a water bottle, immersing my head in cold tap water, all took longer than I expected. My final pace count was 3300—1222/mile—and it had taken us five, rather than four, hours to cover the 7.7 miles, almost all of it downhill. 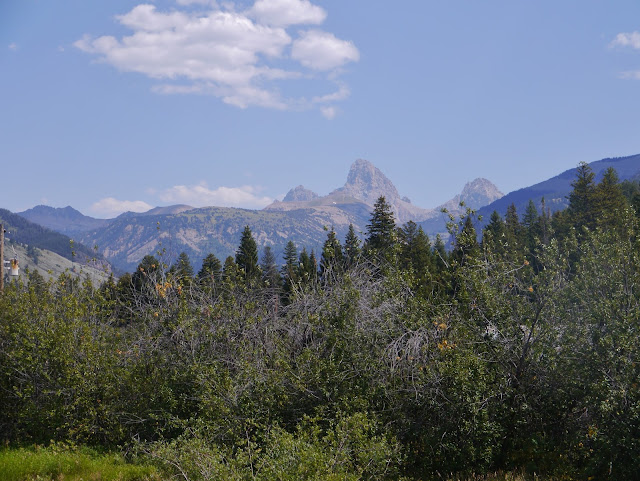 We drove down to Driggs, and had a pizza at 2:30. In the restaurant, I saw local news of the fire in the Sawtooths, which had grown in the two days we had been away from the internet. We drove through the construction that had slowed us on the way in. I mentally ditched half of the Sawtooth drive, thinking we could still go up through Ketchum and Stanley, coming down from there into Emmett. As we drove the lonely highway, I began to see the mushroom cloud of the fires, and by the time we reached the junction to Sun Valley, I had dispensed with all plans of seeing the mountains: it would just be too smoky, and besides, it was so late that we wouldn’t see much, anyway. We stopped in Boise for dinner, then drove on into Emmett, arriving at the B&B sometime around 10:30.


As fatigued as we were, we slept poorly at the Frozen Dog Digs, for reasons I will explore in the final chapter of this series.
backpacking Grand Tetons Teton Canyon
Location: Jedediah Smith Wilderness, Alta, WY 83414, USA