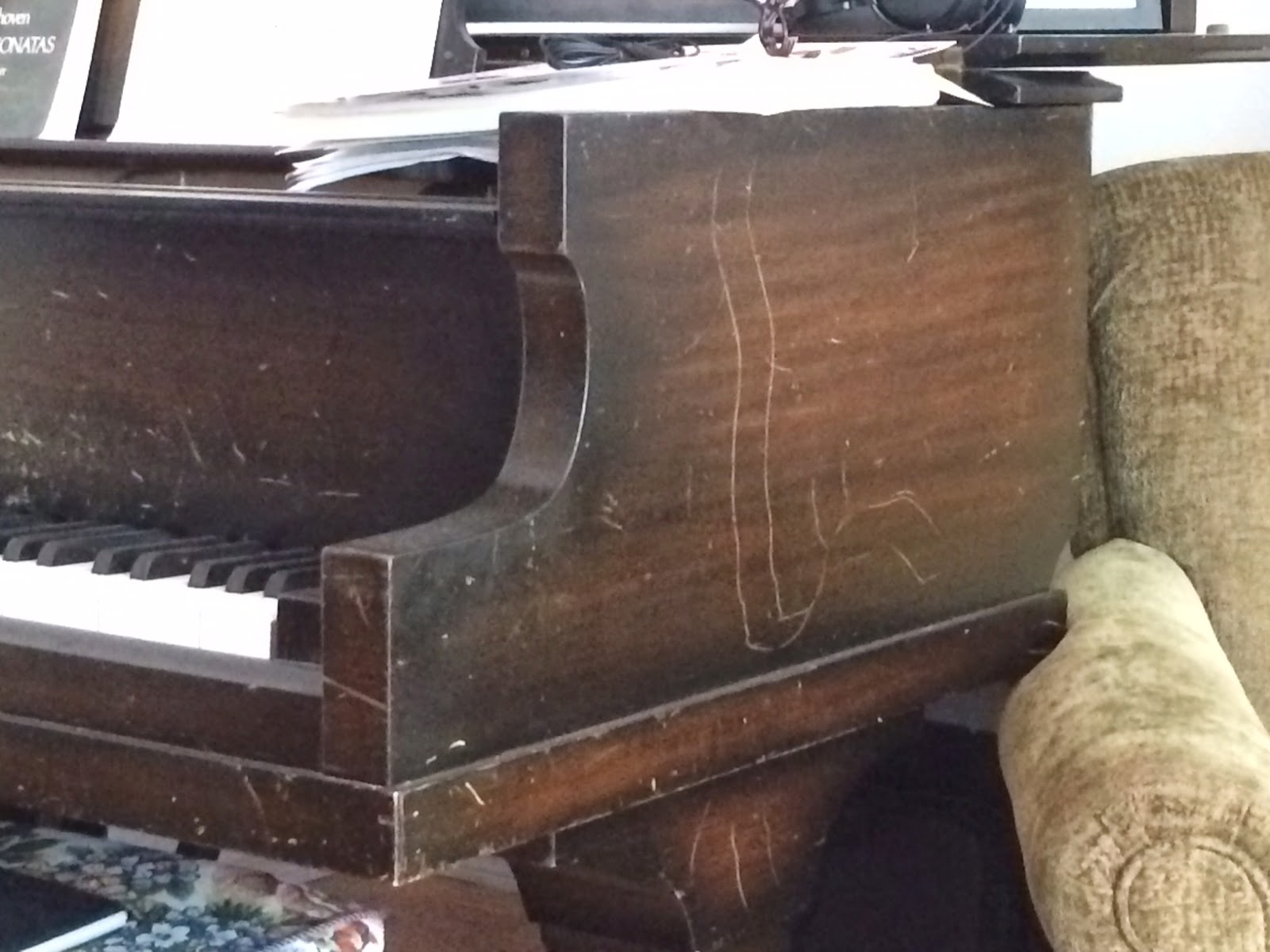 This is not what I'm talking about.

The question comes up frequently when people find out I'm a musician: "What do you play?" My vague answer is "piano, trumpet, guitar, a little bit of everything." My much more specific answer is "scratch piano." Then the conversation begins.

There are pictures of me sitting at a piano when I was still too young to walk. My mother began teaching me lessons when I was in kindergarten, so I like to tell people I could read music before I could read words, though that's quite an exaggeration. In any case, my formal training on the piano ended after fifth grade, when I was allowed to take up the trumpet instead. This means that, for all practical intents and purposes, everything I do on the piano now is self-taught. I can say this sincerely because what I do is nothing like what my mother taught me.

What is "scratch piano"? Most literally, it's a term I made up about a decade ago to describe the art of creating music at the keyboard from whatever's lying around. Give me a leadsheet--a melody with some chord symbols--and I'll turn it into a full-blown arrangement. Give me a hymnal, and I'll use the four-part harmonizations therein as starting points for fantasias on the tunes. Sing, whistle, or play me a tune, and I'll work out my own harmonization of it, then take off and create variations. Give me nothing at all, except maybe the kind of suggestions given to a stage improviser ("What's this big? Where do you think I went on vacation? What's a musical genre you like?"), and I will create something from nothing.

I like associating myself with the great composers of the classical and early romantic era, the last "serious" musicians to make improvisation a regular part of their repertoire (I say "serious" with tongue in cheek, because jazz musicians have been doing this since our music came into existence in the early 1900s). Mozart, Beethoven, Chopin, anyone with keyboard chops and a creative mind could create pieces on the fly, basing them on popular melodies and developing them with far greater freedom than the set forms of sonatas and fugues permitted. If what they were doing was memorable, some version of it would be transcribed and come down to us as a fantasia or impromptu. The loose form of these pieces is a direct result of their improvisational roots, and they're often much more fun to play as a result.

As a church musician, I regularly invented fantasias for preludes, offertories, and postludes, as well as on those occasions when I was providing special music. I took the theme of the sermon as my suggestion, and selected leadsheets from my fakebooks or songs from the hymnal as source material, then took off, seeing where the music took me. As a soloist, I've done similar things, getting a sense of what the theme of an event will be, then making selections from my library of fakebooks that fit that theme and, again, improvising variations on those melodies.

And then there's improv. I've been playing keyboards for Portland's Comedy Sportz troupe since 2009, creating accompaniments for improvised songs, underscoring for scenes, and complete short musical and operas. At first, I drew heavily on my fakebooks, trying out a variety of chord progressions to see what would work. As time passed, I came to appreciate the strengths and weaknesses of individual players, and began making choices for them that would help them shine. Whatever I'm playing, I'm striving to be absolutely in the moment, answering "yes and..." to every offer the players on the stage make, while simultaneously giving them prompts that they can "yes and..." into something spectacular. When it works, it's amazing, and audiences are blown away by it. Even when it doesn't work, I've honed my ear to be able to adjust to unpredictable changes in tempo, harmony, and melody that a player with less native understanding of song form may throw in. Whatever comes out, it's the product of the two of us--or me and the entire team, if they're chorusing--developing the shared improvisational mind.

All these influences and activities play into what I mean when I say I play scratch piano. It's not enough to say a pianist; in truth, when it comes to reading the music on the page (as opposed to faking it), I'm just competent. Let me mess with it, though, whip it up into something that's more mine than it is Bach's, and I think you'll be impressed.

So, to everyone in Ghana with me last week who wondered what I meant when I called myself a scratch pianist: now you know. If there had been a piano there, I would have been happy to show you.

And to everybody else: what's something you're looking forward to this summer? Cool. Give me a minute...ah. Your fantasia is underway.
ComedySportZ improv improvisation jazz scratch piano
Location: Portland, OR 97229, USA