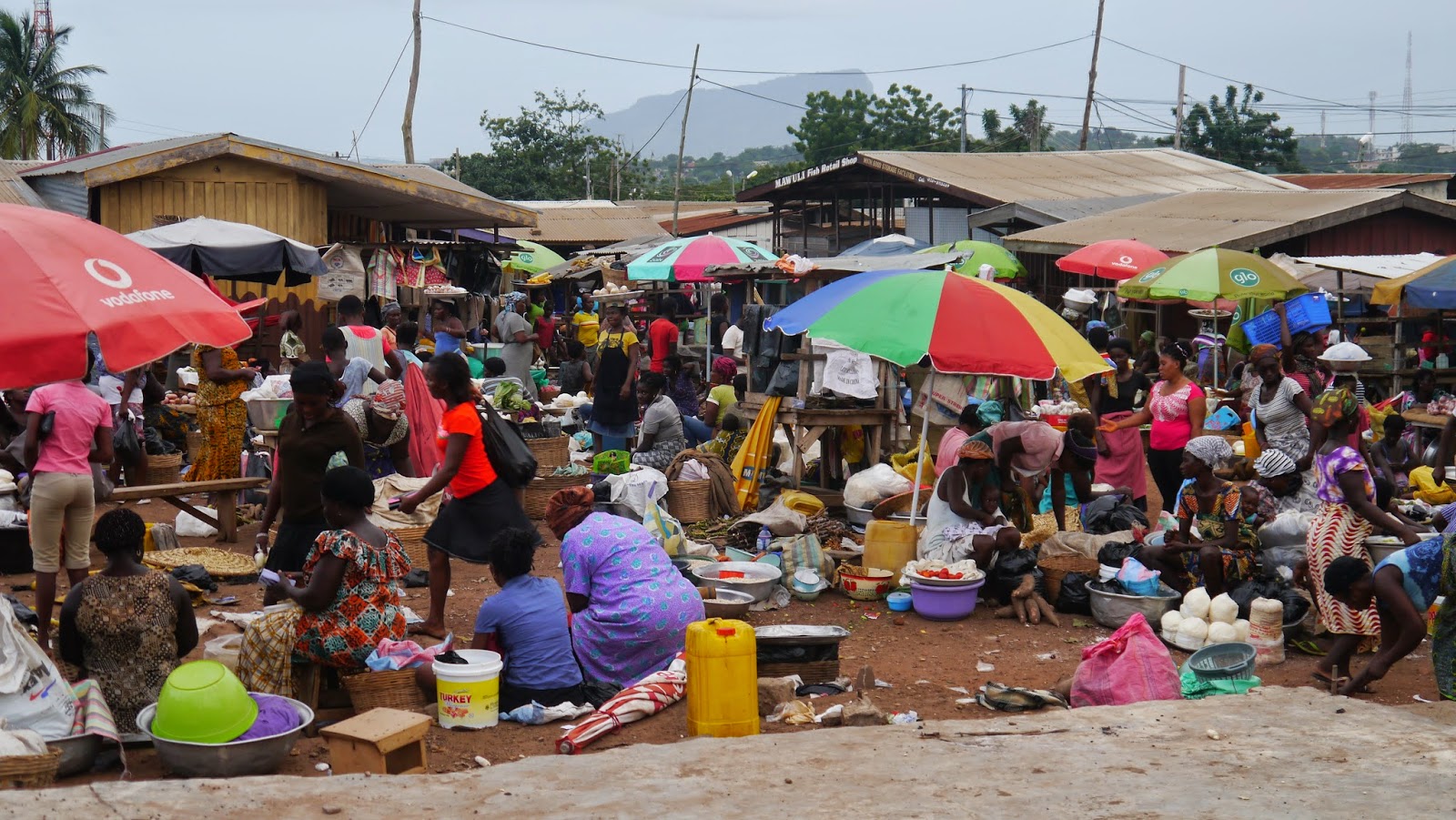 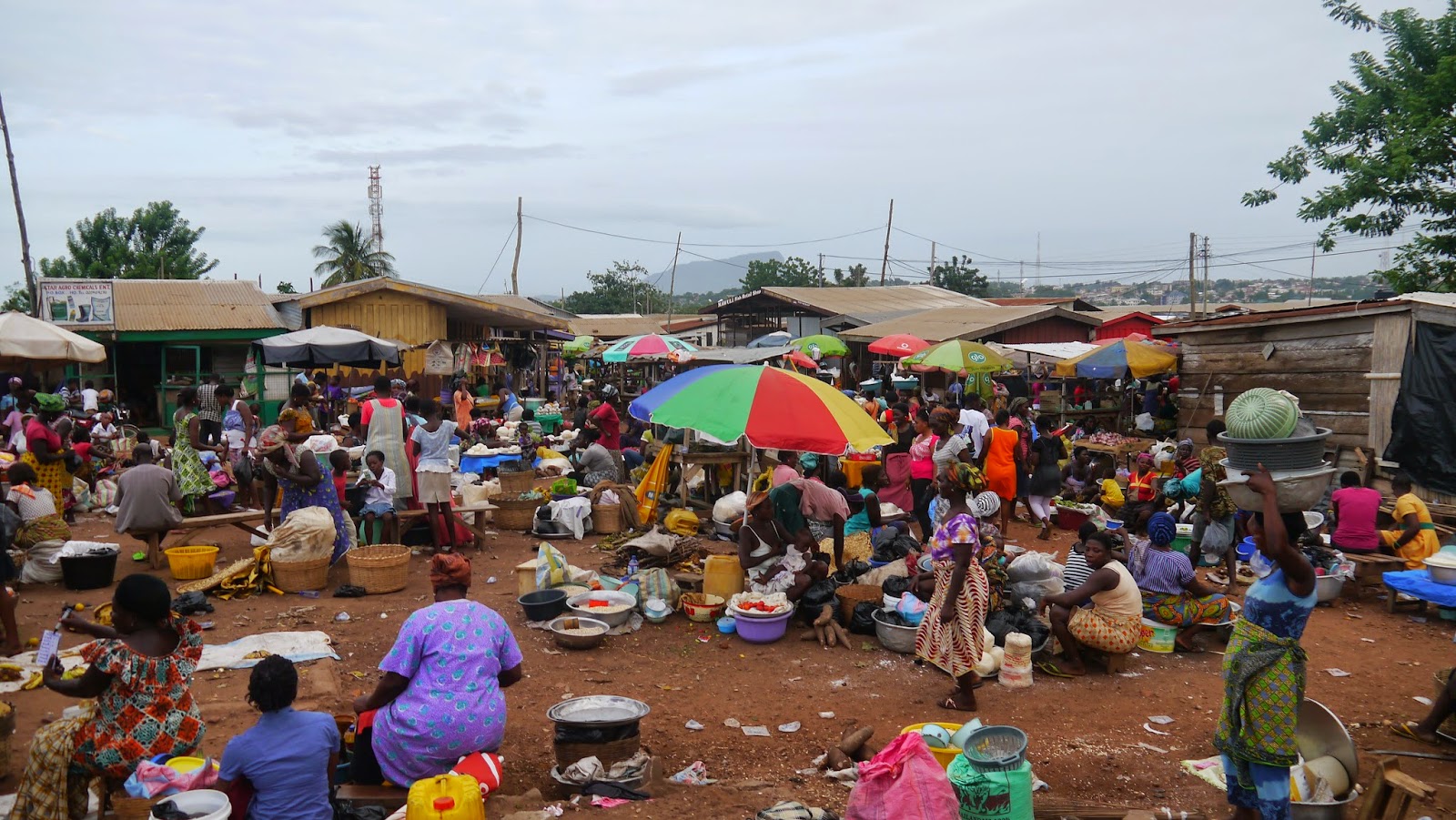 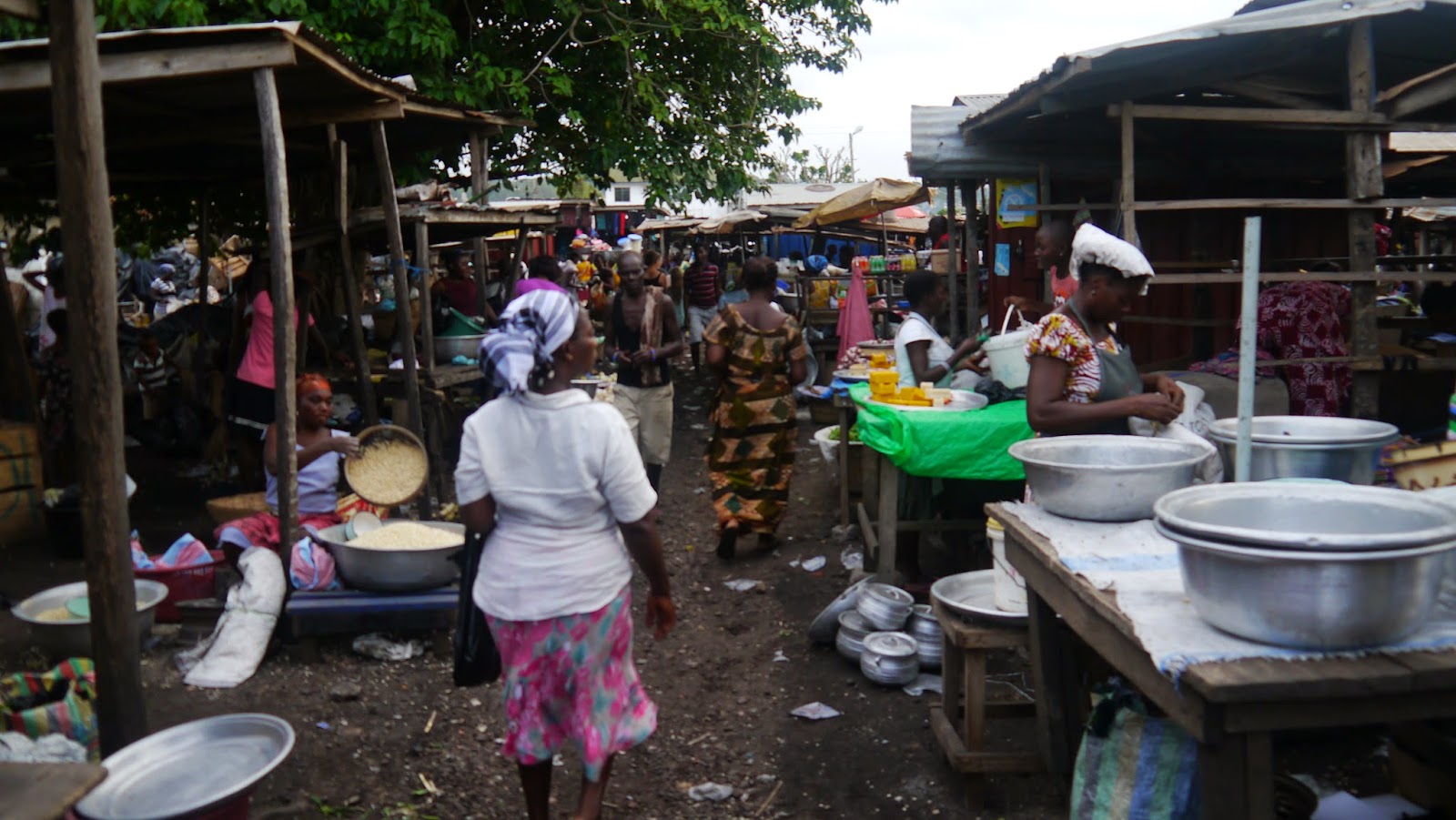 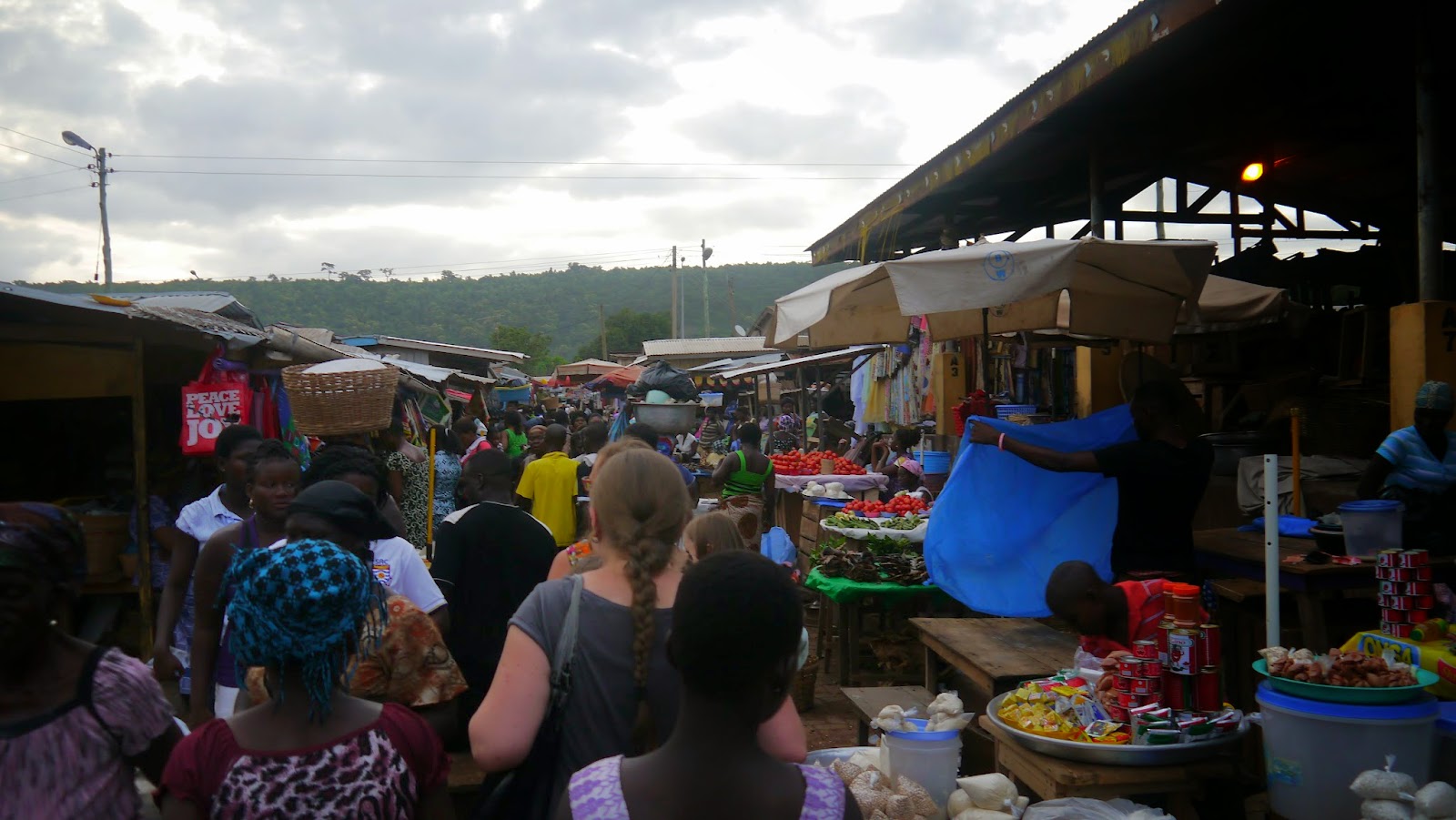 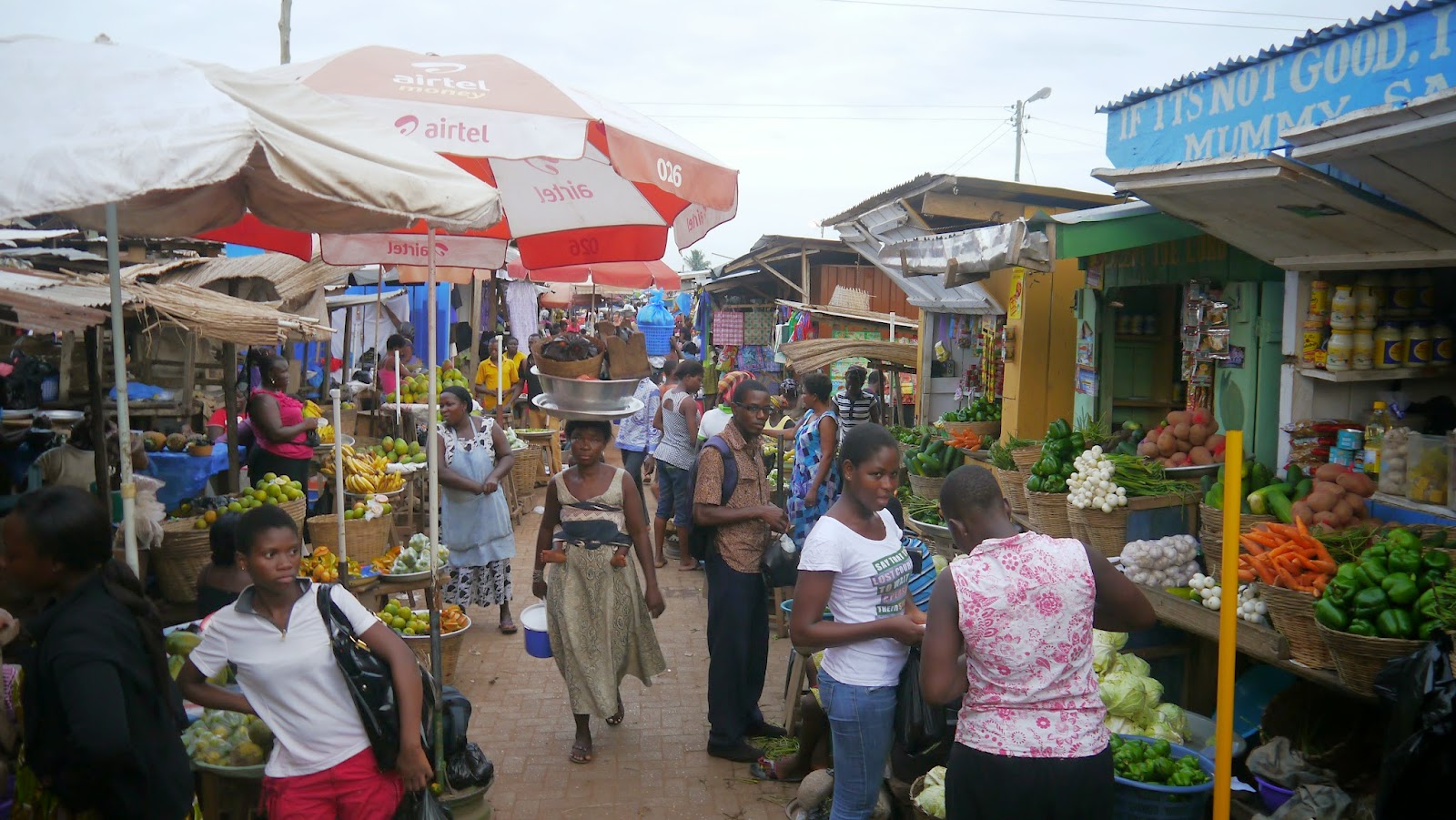 To an introverted westerner who grew up shopping in supermarkets and malls, and finds those places tolerable during low times, but very hard to be in at rush hour or in the holidays, market day is a special kind of hell.

In Dzodze, in Ho, in Accra, market day is a time when Ghanaians flood a public square with booths, canopies, tables, baskets, turning the center of town into an extremely crowded shopping center with mud floors, no refrigeration, and little apparent organization. I went to market day in Dzodze hoping to find shirts made of Ghanaian fabrics, rhythm instruments, perhaps some authentic craft items I could bring home as souvenirs. What I found was baskets of fish, some of it smoked, much of it raw, all of it fragrant; live crabs; live chickens; fruits and vegetables; toiletries; used books; CDs; piles of used clothing and shoes; beads; and, the closest to anything I was actually looking for, booths of beautiful textiles. The last led me to consider bargaining for a shirt, but I quickly discovered that the woman I was talking to did not speak any English and, while she could make me a shirt, could not have it ready in time for our weekend departure from Dzodze. I explored the market for awhile longer, had enough, and decided to exit the crush of bodies, voices, and smells. Somehow, I had managed to set aside the claustrophobia I sometimes feel in such situations in favor of a true Ghanaian experience.

In Ho, I went back to the market, initially looking for a tube of toothpaste. I found a small tube of toothpaste in a basket filled with much larger tubes. Knowing I just needed it for a few days, I chose that tube, and asked the price. “Four Ghana cedis,” said the vendor. I fished the money out of my pocket, and began to pay, at which point another man, standing by the vendor, began pointing to larger tubes and insisting in Ewe that I should take one of them instead. “No, I just need this much,” I assured him and began walking away with my purchase. He followed me, telling me I needed to be wiser in the ways of the black man and not just take him at his word about the price. In fact, he said, the much larger tubes of toothpaste were only worth 2 cedis. I should have bargained him down, offering a much lower price, and we would have met somewhere midway. In fact, he said, every vendor in the market expected this, and none would quote the actual price. Arriving at that price is a game these vendors love to play.

Having this in my hip pocket, I still paid full price that night for three pieces of fabric, which were then turned into two beautiful shirts and a dress by a tailor Kofi’s wife, Rosemary, brought to the hotel. All told, between the fabric and the sewing, I paid a total of $110 cedis—about $37 US—for three pieces of clothing tailor made to my body and Amy’s.

I had one more market experience, this morning, in Accra, at the Art Centre, a bazaar for arts and crafts dealers. My roommate Joe and I arrived at the market in a taxi with two other members of our group, and the two of us went into a shop selling shirts just like those I had been looking for—much like the two I had made for me, but without the lining, and with buttons. The owner of the shop promised “No pressure!” from the moment we walked in. And then others began coming in, every one of them apparently his brother, all of them pushing beautiful items we were not looking for on us: bracelets, wood carvings, beads. Joe was brought a hat made of kente cloth that was exactly what he wanted, and he bargained briefly for it and was happy with his purchase. I bargained for two baseball caps to take with me as presents. The shirts, however, were not working for me, especially the kente cloth shirts that would be far too expensive—though I never got to the point of bargaining, because none of them had buttons. We finally broke away from the cloud of merchants, insisting we’d be back if we decided to be a shirt, but having to insist, over and over again, that we were not looking for anything else.

We walked into the center of the bazaar, and it was as if we were covered in honey and all the merchants were flies. They pressed us from all sides, eager to show us all sorts of items that might better fit what we were looking for. Shirt upon shirt was presented to me, but I quickly found myself burning out on the experience, and began forcefully telling every vendor that I would not buy anything unless I was left alone to look. I had to pull Joe away—he was being far more polite in turning down all the offers—and somehow we managed to get out of the interior of the bazaar.

Outside, we found a booth dealing in carvings and Ghanaian rattles made not with beads, but shells. I promised this dealer I would be back—he was beginning to put on the pressure—and Joe and I walked away from these booths, and found ourselves face to face with an older man who announced he was (surprise!) a brother of the shirt vendor at the entrance. He dealt in just one item: bakitas, small round shakers made from nut shells and attached by a single chord. He demonstrated proper playing technique, creating a complex rhythm with one in each hand and singing a traditional Ghanaian song. It was lovely. We were entranced. He gave us a short lesson, and I was happy to buy two. I asked if I could make a video of him playing and singing, and he was happy to oblige.

Leaving his booth, I walked back toward the shaker seller, who recognized me instantly and reminded me what I’d said: that I would be back if I still wanted one of his instruments. I took it in my hand, played some boboobo rhythms, admired it, asked what it would cost. He told me to tell him what I was willing to pay. I said 10 cedis. “It is not enough.” 15? “It is not enough. Give me 30.” 20? “It is not enough, but I will give it to you for 25.” I thought about it long and hard. Benashe, a fellow Orff-Afrique student from Iran, told me I should go for it. She had just demonstrated her own hard bargaining skills, so this seemed good advice to me, but I wasn’t sure I could afford this: I still had one, possibly two, taxis to pay for, as well as two meals, before I would fly out of Ghana in the evening. I took out my cash--$6 US, 50 Ghana cedis. “I will take 10 cedis and five dollars US,” the vendor said—still the equivalent of 25 cedis total. I went for it; Benashe gave me a thumbs-up. Then the vendor asked if he could have the one dollar bill, as well, because he thinks the American dollar is wonderful, and he would like to have one as a souvenir of our experience. I looked at that dollar, thought hard about it, thought about what a dollar really means to me (a pack of gum, one fifth of a draft beer), and gave it to him.

I’ve only experienced marketplace bargaining once before, 27 years ago in Juarez, Mexico. I have done some bargaining with car dealers, and hated it every time, but with Ghanaians, it really is a polite game that needs to be played—and can be quite playful. To accept the asking price for an item, if it is even offered, is to lose the respect of the vendor. To bargain the price down to what the item is actually worth may feel rude to an American, but when one experiences the customs—vendors will whisper bids in the buyer’s ear, and when the return bid is too low, will gently say “It is not enough”—one finds that the game of bargaining is much less a matter of aggression and deceit, much more a negotiation between equals. In the end, any price one pays in a Ghanaian marketplace will be ridiculously low compared to what the same item would cost in America, whether it is a shirt, a swatch of kente cloth, a carving, a coconut, or a tube of toothpaste. It is tempting to just pay what one things the object is actually worth, because it feels like exploitation to get them so cheaply; but this is their world, not ours. They know what their goods should cost, and for us to pay more for them than that, whether it is through our silly awkwardness around bargaining or because we’re paternalistically overpaying on purpose, strikes them as undignified, exploitative on their part, and profoundly disrespectful to both of us. “You are welcome in Ghana” is a sincere greeting, a generous offer of hospitality that includes paying the same prices for art objects and clothing that Ghanaians do. Rejecting that hospitality is a peculiarly western affront, when the proper response to “You are welcome” is “Thank you.”
Labels: Accra Dzodze Ho market Orff-Afrique
Location: Ghana