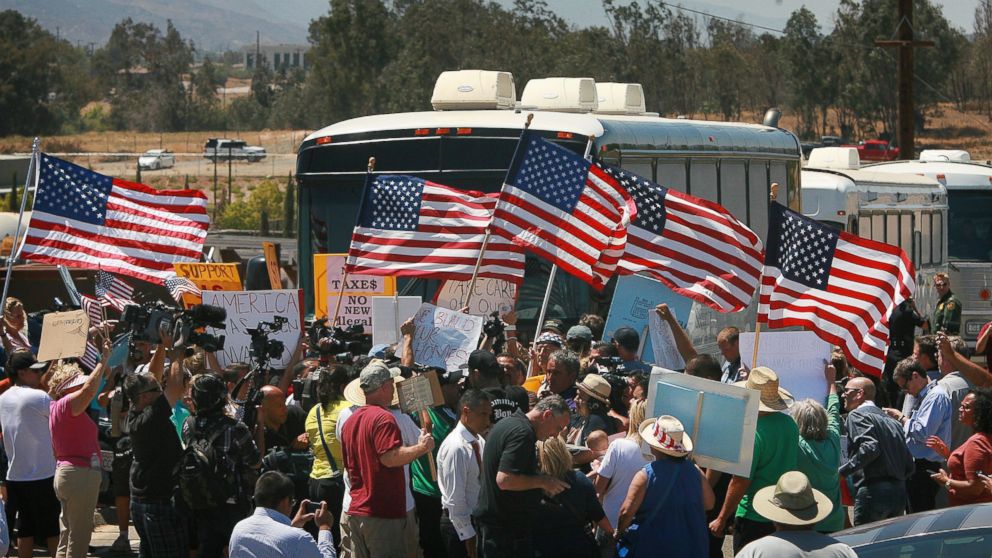 "Not our children, not our problem."

The sign was seen at a protest in Murrieta, California, according to reporter Bob Ortega, speaking with Brooke Gladstone on NPR's On the Media program last Friday. The moment I heard those words, I knew I had to write about them, that they would haunt me until I did. So here I am.

The occasion for that sign was a blockade. Three buses of undocumented children were on their way to a Border Patrol processing station in Murrieta. The demonstrators managed to keep the buses out of Murrieta, but not out of the United States: the buses were simply diverted to a different processing station in Chula Vista. One other accomplishment of the protesters was giving Murrieta a black eye, as the publicity led the town's mayor to write an open letter to the White House apologizing on behalf of his community. It also delivered a message to the children on the buses, the message of the sign Bob Ortega saw (full disclosure: I Googled that sign for nearly an hour, and couldn't find an image of it): "You're not our children, not our problem, so go home."

Let's set aside the irony of Caucasian-Americans calling Central American Indian children illegal immigrants, and look instead at these three words: "Not our children."

I teach music to children. Last year in my job in the Reynolds School District of outer east side Portland, I had more than a thousand students. The majority of them were recent immigrants to the United States. Many were Mexican, but there were also children from China, Vietnam, Samoa, Russia, Ukraine and, most tellingly, Somalia. I don't know how many of these children were here legally: that's not a question we ask in a public school setting. I do know that the Somalian children who arrived mid-year were refugees fleeing the violent civil war in their homeland. Whatever the situation their families left to come to America, these children were, like all the children I've taught (including the middle class white suburban children) playful, inquisitive, affectionate, precocious, sometimes naughty, sometimes nice, empathetic, sensitive, creative, charming--the list could go on, but to summarize it in one word, children. Read anything I write about children and it becomes clear I've got a very soft spot for them. It's the main reason I'm so well suited to be a teacher, more specifically, an elementary teacher.

My soft spot extends to children regardless of their ethnicity. I was utterly entranced with the children of Ghana, just as I have been with the highly diverse population of Reynolds kids, and by the near-monoculture of children in Banks, Oregon (at least 90% white). I love children, period.

I realize this is not a universal feeling, however. Growing up in churches and then having several of my own, I encountered many adults who had a low tolerance for children, who preferred them "seen but not heard"--and, in some cases, not seen at all. There were many in these churches who bemoaned the absence of young families, and pined for the days when the Sunday School was bursting with children, but were unwilling to adjust their worship or program in any way that might accommodate young people--particularly young people whose culture differed from that of the traditionalists who so resisted change in these churches.

Then there's the matter of financing school budgets. In my youth, Oregon funded schools locally through property taxes. As school populations grew and school properties needed upgrading, budgets came before voters in the form of a property tax increase. In my memory, these almost always were defeated. Eventually there was a property tax revolt, modeled on California's, that led to such a severe limit that the state had to take over most school funding through income taxes--which, again, have to come before voters, now in statewide elections, and are almost always defeated. If I were a child watching these election results, the message to me would be clear: we don't want to pay for your education.

And here's the saddest part of this equation: the voters turning down tax increases that would pay for schools, the church people resisting changes that would bring young people back to church, the protesters blocking buses of immigrant children, the Tea Party Republicans resisting immigration reform, are almost all older people, grandparents who no longer want to pay for the care and feeding of children who did not issue from their own loins. Not our children, not our problem.

Set aside for a moment that the children on those buses were fleeing drug war violence in Central America, that the children in schools across Oregon are being amassed in larger classes in decaying buildings with fewer teachers, that churches that cannot attract young families will ultimately close. Boil it all down to this: these are children.

When I was a child, I benefited from public education that was reasonably well-funded. The people who paid for that education were property owners, most of them middle-aged and older. As children, they, too, had benefited from public education. Now add in this piece: my great-grandparents were immigrants who benefited from the open-arms policy symbolized by the Statue of Liberty. Whether or not I'm a kid person, it would be ungrateful, selfish, and hypocritical of me to suddenly announce that I'm not going to pay one more cent to welcome or educate children who are not mine.