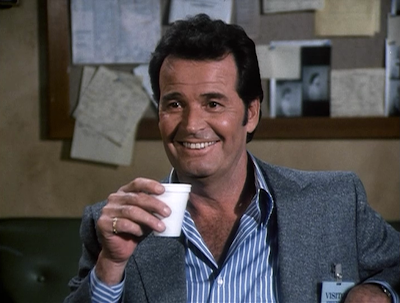 James Garner is dead at 86.

As an actor, Garner played wise rascals who got out of fixes using their wits. In his iconic television roles as Brett Maverick, a gambler in the Old West, and Jim Rockford, a private investigator in 1970s Los Angeles, Garner created characters who preferred charm to gunfire. Rockford pointedly left his gun at home.

Reminiscing about The Rockford Files, I found myself nostalgic for another icon of my childhood: the G.I. Joe Explorer line. As the Vietnam War heated up, Hasbro found demand for military action figures was dropping off, and revamped its most famous toy line. G.I. Joe toys no longer wore uniforms, and the names of the toys emphasized the adventures in which they and their lifelike hair were engaged. I had the space explorer, which came with a scale model Mercury capsule my silver-suited astronaut Joe could ride in. My brother Stephen had (appropriately) a sea explorer, with red hair and beard, knit cap, and inflatable raft.

Jim Rockford and the G.I. Joe explorer inspire nostalgia in me for a time when adventure didn't have to be about body counts and explosions. Rockford still got into physically dangerous situations, and the stunts he pulled off during car chases were legendary; and some of the G.I. Joe explorer toys came with shoulder holsters and pistols that fit (awkwardly) in their rigid hands, but the focus was elsewhere. Rather than being the whole reason for the story, action was simply a part of it, something that happened in the third act; and when we played with our G.I. Joes, we took them on expeditions rather than campaigns.

I've often wondered why, as charming as he was, James Garner did not have a regular television role after Rockford went off the air in 1980. I suspect the reason is that, in the wake of the Iran hostage crisis and with Ronald Reagan in the White House, America rediscovered the joys of violence, and Hollywood realized there was money to be made in blowing things up. "Ready, fire, aim" became our de facto national motto. In a culture like that, there's no place for heroes who leave their guns in the cookie jar.

Still, it's instructive to think back to a time when, for a few short years, America looked at what it had become and backed away. How long will it be before we again realize that bullets make more problems than they solve?
G.I. Joe explorer guns James Garner The Rockford Files
Location: Portland, OR 97229, USA