Funny; this never happens when I take pictures in America...

For three weeks, I've been blogging almost exclusively about Ghana: getting there, being there, coming home from there. Today, I (mostly) wrap it up with a collection of observations that seemed too brief to merit their own posts.

I've known this since I got my first iPhone in 2009, but as with any technological advance, once you've lived with it for a couple of years, you forget how incredible it actually is--and wonder how you ever lived without it. Two things happened in Ghana that made me stop taking mine for granted: 1) My phone's internet access shriveled from constant to, for a week, non-existent, and then sporadic at best after that, meaning that the phone was only useful as a camera; and 2) using it as a camera, I took pictures of children at the elementary school we visited, an action that was always followed by the children crowding around me to see the picture, laugh with delight at how they looked on the phone screen, then scroll through pictures on the touch screen, clearly awed by the ability to do so. At first this surprised me--the cellular network constitutes almost the entire telephone infrastructure throughout Africa--but then I remembered that the cell phones for sale in every marketplace (right beside the booths selling roasted corn and smoked fish) are all flip-phones. Smart phones are just now becoming available to the wealthy, so these children had never seen one before.

Everywhere we went, we saw unfinished building projects: office buildings, large houses, and structures too ambiguous to identify. Hardly any of them were being worked on. In some cases, like this one just outside Dzodze, the work had been on hold for so long that the forest was beginning to reclaim the site: 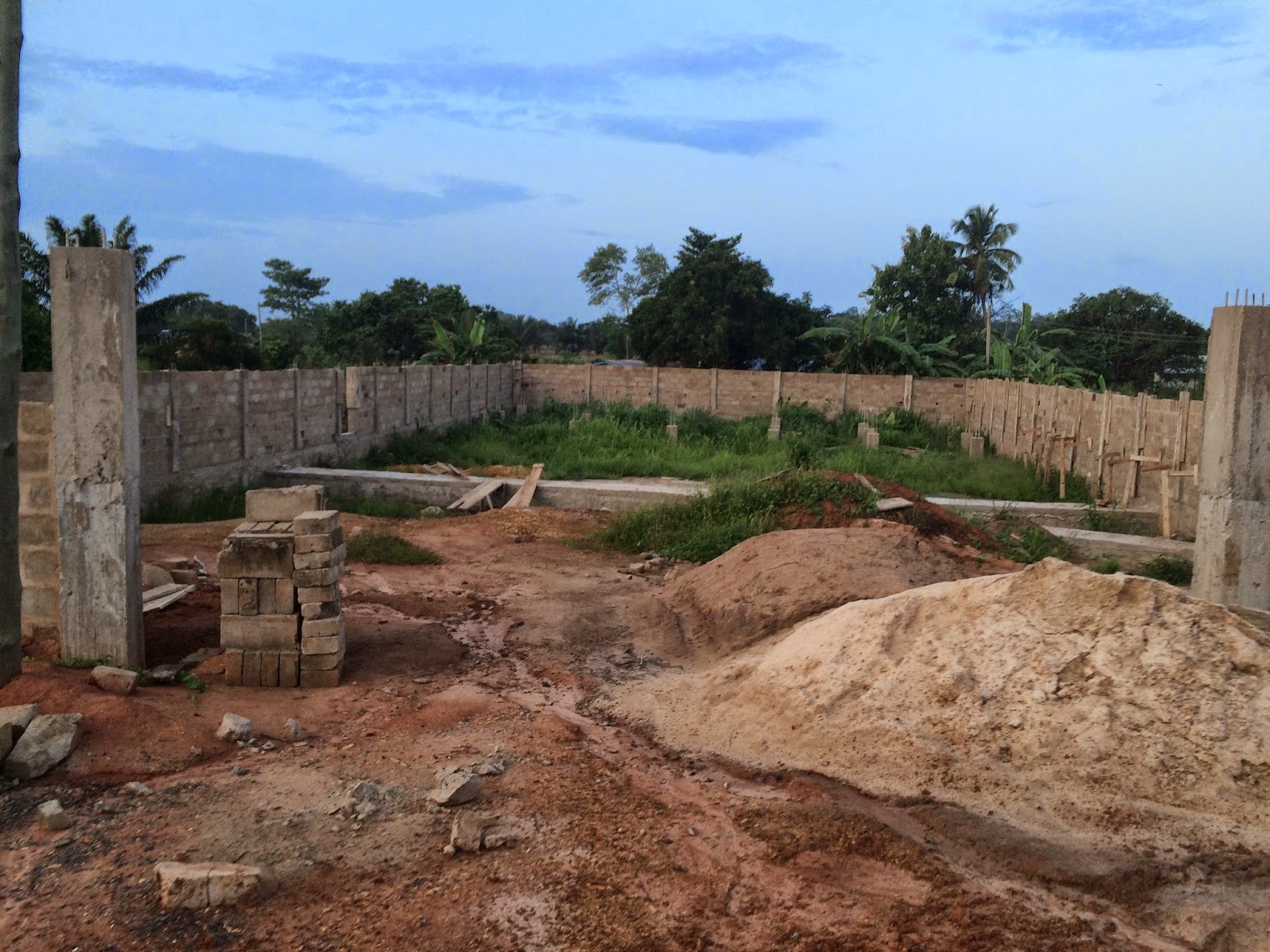 James Harding had noticed this phenomenon, too, and asked about it. Here's a paraphrase of what he was told: To encourage development, Ghana does not tax property under construction. This creates a tax advantage for starting a project long before sufficient capital exists to complete it. Buildings that, in the USA, would be finished in a matter of months get strung out over years as a result. The owner contracts for as much work as he or she can afford, and when the money runs out, puts the project back on hold until there's another windfall. Over time, these projects can become overgrown--I saw some that had almost been reclaimed by the forest--and once they offer any shelter at all, they become magnets for squatters. In Accra, I saw unfinished homes that had families living in them. These derelict houses-in-progress do not go unnoticed: I saw several attempts by irate neighbors to remind developers via graffiti that it is illegal to build in stages in this way. Illegal it may be; enforced it is clearly not.

Keeping Out the Riffraff

Ghanaian village life is inclusive, friendly, welcoming. Ghanaian city life is another matter. On Friday, we spent a few hours on site at an American school in Accra, with our San Francisco instructors presenting a lab class for students of that school. Outside of this demonstration lesson, we wandered the neighborhood, which consists of huge homes, each with its own walled compound. I saw lawns for the first time in two weeks, and found their presence jarring. More than that, I was keenly aware that the tops of these walls were protected with razor wire and broken glass. I saw more examples of these almost militarily defended homes in the vicinity of the hotel we stayed at for our last two notes, including one that housed the Ghanaian headquarters for an Episcopalian Relief Ministry--again, behind walls and barbed wire. Talking to Janice, a student from South Africa, helped explain the decidedly unfriendly use of bricks, stone, and sharp objects. She told me how a Methodist bishop in Johannesburg had opened up a historic church to house refugees over the objections of the congregation. By the time the refugees left, the church had been stripped of all decoration. Anything the refugees could pry off the walls, doors, altar, had been taken and sold to pay for necessities. I expect it's the same in Accra, where the poor sometimes live in shantytowns just down the street from the razor-wire-walled homes of the wealthy: if they can get to your stuff, they'll take it. Best to play it safe and keep them out.

(Disclaimer: I have never seen a single episode of MacGyver.)

The genius of Africans is innovation. This may surprise westerners who cannot think of a single technological advance that originated in Africa, but throughout this continent, humans take what's in front of them and turn it into something wonderful. It won't have lasers or a lightning fast processor, but African innovations are remarkable. Consider the gyil, the Ghanaian xylophone that was the inspiration for the Orff instruments that can be found in so many music classrooms throughout America and Europe: 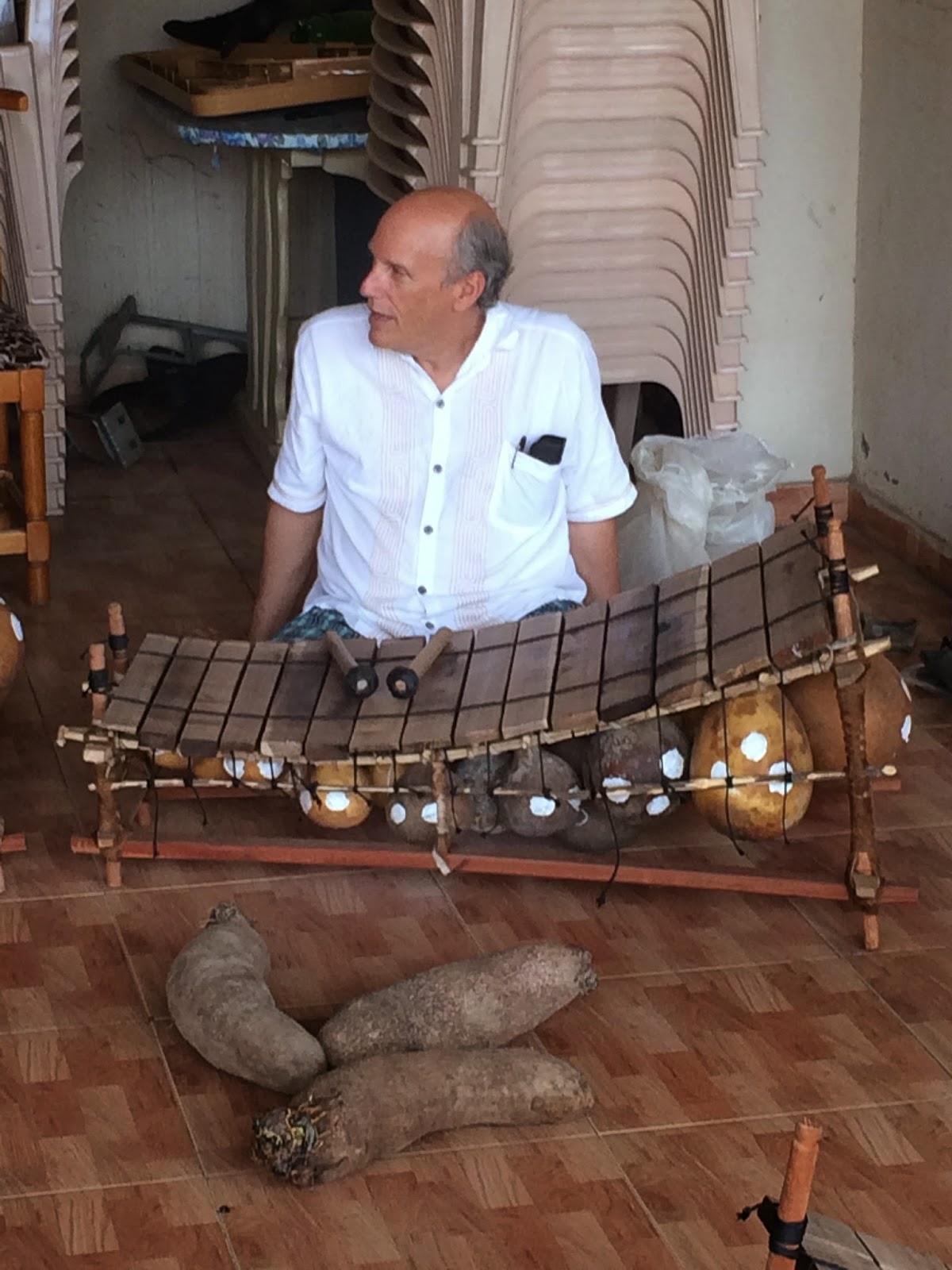 Originally, the gyil was made with scrap wood, sticks, strips of rawhide, and perforated gourds, the holes covered with the spider silk. Mallet heads were made from the sap of a rubber tree. In recent years, some of these materials have been updated: some of the rawhide has been replaced with nylon twine, the spider silk with scraps of UPS envelopes, and the mallet heads are now made from old tires. When in need, Africans improvise from whatever is available. 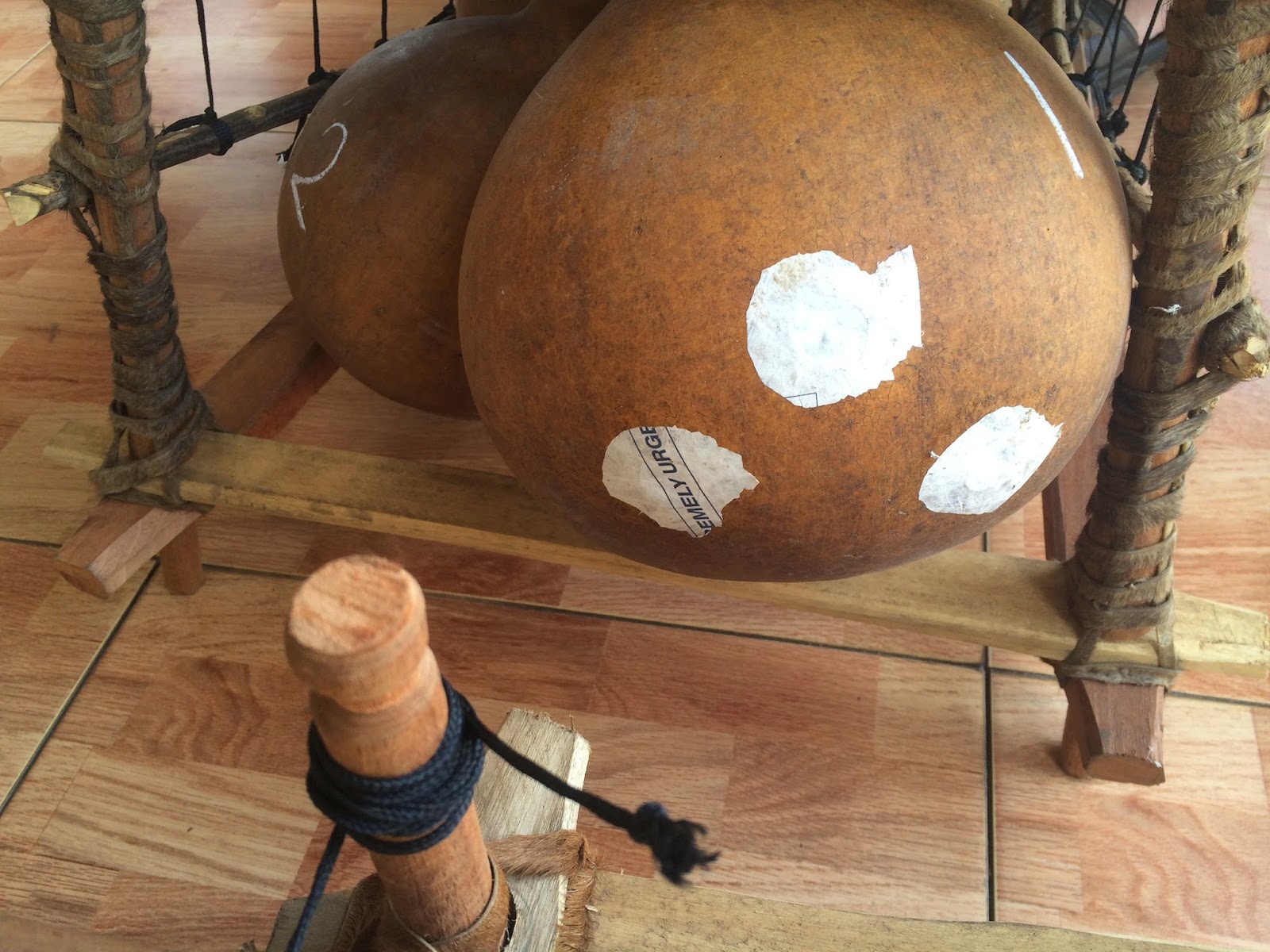 Use It Until It's Dead

Ghanaian cars, vans, trucks, buses, motorcycles stay in use long past the point at which Americans would consign them to a scrap yard. Throughout Accra, I saw cars and trucks parked by the side of the road with their drivers working under the hood, coaxing more life from them. Just as Africans improvise from what's available because they have no options, they also must made do with motor vehicles that are in a constant state of overhaul. One of our buses had an unnerving tendency to stall just as it was time to get on the road. The moment it happened, the driver jumped out, ran to the back of the bus, and got to work on the engine. Minutes later, he'd be back on board, nursing that engine back to life.

When most Americans hear "Africa," they think "hunger." They have good cause for this association: where European cultures have seen Africa as a place for colonial exploitation, America has seen it as a place in need of missions of mercy, whether that means missionaries or food drives. Between drought and political instability, there is ample reason for Africans to be hungry. And yet it took me over a week to see any sign of malnutrition in Ghana. This despite spending my first week in a poverty-stricken rural area.

All I have is anecdotal evidence. Most of my time in contact with Ghanaians was with people who I suspect constitute the middle class of this country. Only on trips to markets did I see children with the protruding bellies American infomercials have taught me are a sign of malnutrition. I saw so little of it, in fact, that it startled me when Alex and Sarah asked me if I saw hunger in Ghana, to which I could honestly say I see much more of it on the job at my school in East Portland, where 90% of children live at or below the federal poverty level, and nearly the entire school is on both breakfast and free or reduced lunch.

I attended an Independence Day barbecue Friday. There MaryAnn Rambo, who has been reading my blog, asked me if I missed Ghana. I told her it's complicated.

There is, in fact, much about Ghana that got to me: music, dance, hospitality, playfulness, resourcefulness. I grew accustomed to the primitive sewer systems, to the oddly helpful ubiquitous use of car horns, to the friendliness of even the con men and hucksters who sought to separate me from my money. All these qualities (except the sewer issue, which was finally resolved a few years ago with the Big Pipe project) exist in Portland, but they are subdued compared with Ghana. I wish people were as open and sincere as Ghanaians, less guarded in their approach to others, less prudish about bodily functions, more generous in their dealings with each other, but by and large, Oregonians are good, decent people.

I do find myself after nearly a week at home still waking up confused about where I am. This is unusual: in all my travels, I have rarely had a problem locating myself the moment I come to consciousness. It's probably largely due to the extreme jet lag I'm still struggling to shake, but I think it also has to do with the sheer foreignness of where I've been. So much of Ghana was new to me, stimulating my senses in ways they'd never experienced before, that it threw me into a new dimension. Few places have ever had that effect on me, and none to the extent of this one.

I'm not alone in this. People I know who've spent time in Ghana have all expressed envy when learning of the trip, and reading my posts, have told me they miss it.

It did get under my skin, changed me, opened my heart up to a part of the world I barely knew existed. For those reasons and more, I expect to go back, though I cannot say when that will be. I have found in the Nunya Academy a mission I can embrace wholeheartedly--bringing music to the children of Dzodze--and I can see myself returning there to teach workshops in trumpet, piano, and theory, not to mention orchestrating pieces for the Nunya band.

At the airport in Accra, there's a sign saying "Welcome to Ghana, gateway to Africa." This was my first visit to Africa, and I can't speak to any other nation on this huge continent. There may well be other nations that will welcome travelers as warmly and helpfully as Ghana did me. What I can say to any of you who are considering a trip to Africa is this:

I was nervous about going, even afraid. Ghana took my fears and gently coaxed me out of them. Going there will introduce you to a culture that is warm, welcoming, and open. Having Ghana as my introduction to Africa has made me far less reluctant to consider traveling to other parts of the continent. I commend the experience to you.
Labels: Ghana gyil hunger Orff-Afrique
Location: Ghana