To experience Ghana in a day, there is just one place to visit: Elmina.

Elmina sits on the Cape Coast. It’s a fishing community with a scenic harbor crowned by two historic structures: a castle on one hill, a fort on the other. Parts of these buildings, as well as other buildings in town, date back to the earliest incursions of Europeans into West Africa in the 1400s. 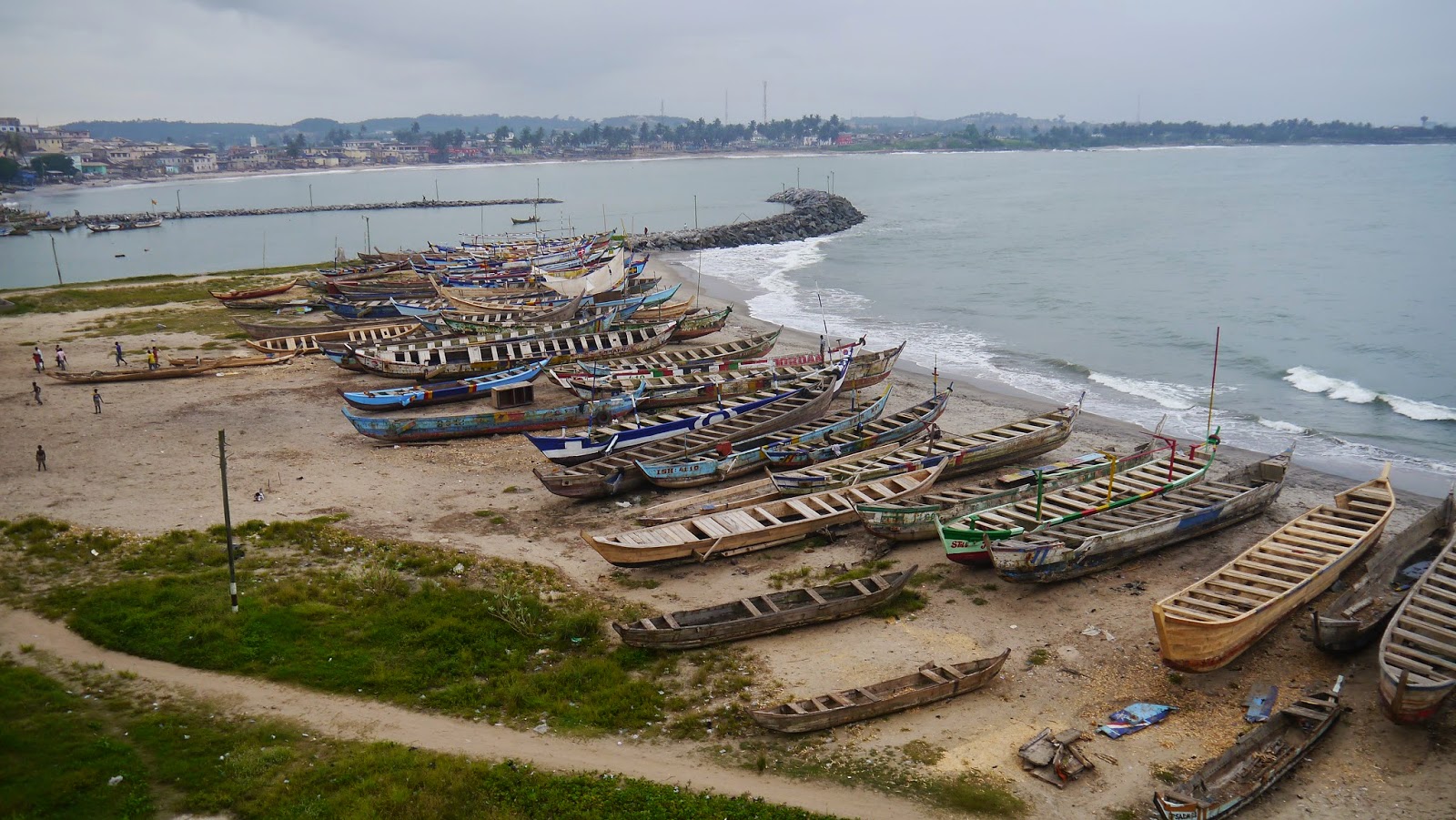 Viewed from the castle, Elmina is as photogenic as any place I've been in Ghana (though it should be noted that this has not been a touring experience; in fact, we spent an entire week in one location, focusing on the culture of that site). The harbor and the shore teem with long, brightly painted fishing boats that are rowed out to sea, then brought back by the tide. There are no sales, and all the fishing is done with nets. The lack of modern tools for this ancient trade is typical: when I’ve seen buildings under construction, work was being done with saws and hammers, not a power tool to be heard. Even sky scrapers under construction have the look of medieval carpentry techniques, with floors propped up by large numbers of bamboo poles.

But back to Elmina: only the presence of automobiles, corporate logos, and television aerials (idiosyncratically elevated above their mud huts by bamboo poles) clues one in that this town exists in the current century. It really resembles a romantic painting of a Mediterranean fishing town. 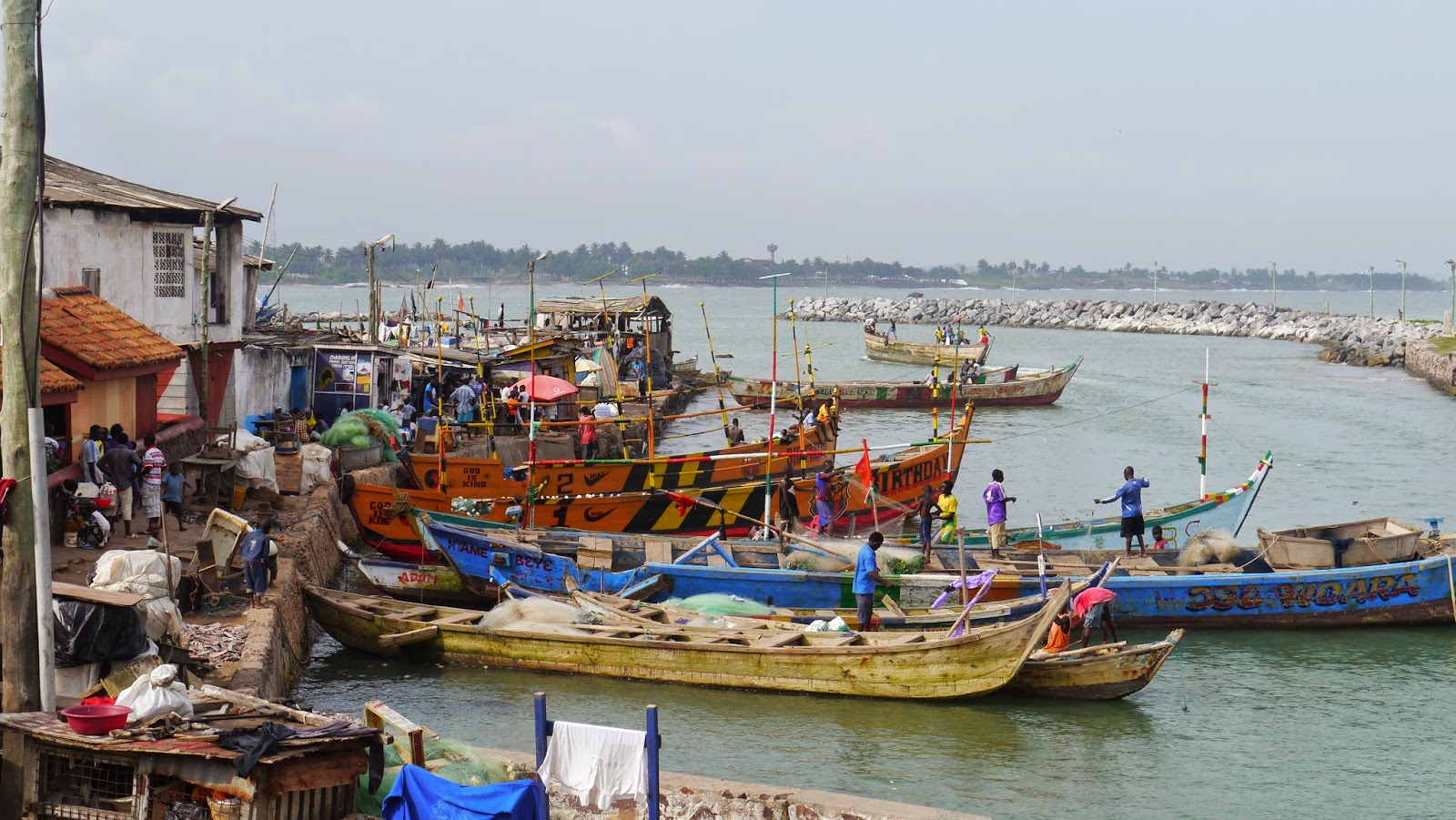 The streets are filled with people engaged in the same tasks we saw in every Ghanaian village, vendors hawking wares, children helping their parents, women carrying enormous burdens on their heads. The open sewers present in every Ghanaian town appeared far filthier than any we saw elsewhere, probably due to the density of Elmina’s population. The smells we encountered here were also uniquely piquant, the normal gameyness seasoned with the smells of any fishing town I’ve ever been to. 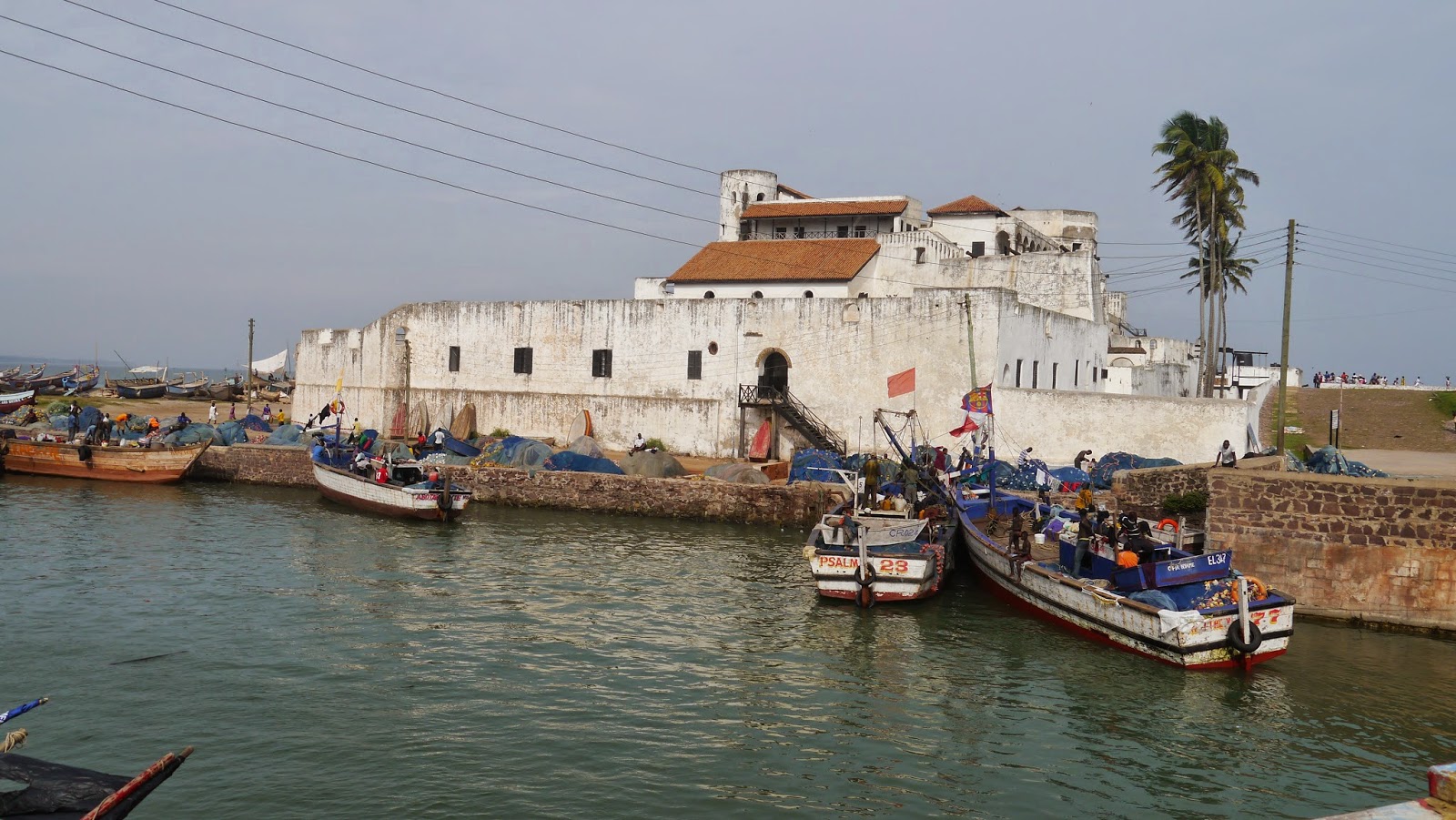 The entrance to Elmina’s most famous tourist attraction, the castle, is a gantlet of hustlers, eager to prey on the white tourists making the pilgrimage to a terrible place (more about this in a moment). As our group crossed the bridge to the castle, they descended on us, warmly asking our names, where we were from, how we liked Ghana, inquiring if we might like to buy some of their artwork. As at the Art Centre, many of them appeared to be brothers of each other—and yes, they were all men. One man showed me personalized bracelets, told me he would make one for me while I was in the castle. I told him no, several times, as firmly as I could. Another, named Isaac, ran the same shell game (literally) on several members of our group—we compared notes at dinner afterward, and realized what he had done. He extracted just enough information from each of us, and even though we insisted we did not want to buy any of his artwork, he found us after our tour and gave each of us a conch shell with a personal message to us from him, to remember him by when we returned to our homes. Even if we refused to give him any money for it, he pressed it in our hands and insisted we take it. If we took it into our hands, he presented us with a list of donors to his soccer team, each of whom had given at least thirty Ghana cedis, some much more, as a voluntary offering to thank him for this gift. I continued to insist that I would not give him any money. He left me alone for awhile, and I held the shell in my hand, thinking I had just acquired an extremely awkward souvenir that would certainly remind me of a uniquely Ghanaian experience. Then he was back, now pleading for some money, that he was hungry and it was such a beautiful piece, surely I could give him something for it. At this point, I pressed it into his hand and told him firmly I did not want it, and I had no money for him—a partial truth. I did have money in my pocket, but I was not about to give him any. Later, as we talked about our experiences, I learned that Benzola, one of our drumming instructors, had seen Laura holding the shell that she had not been able to refuse, even though, like me, she had not given Isaac any money. “You must get rid of that!” he said. “If you keep it, it will haunt you until you pay for it!” She realized that Benzola was speaking to the Ewe notion that everything has a spirit, suggesting that Isaac had given her a totem with the power to plague her conscience. Unable to find Isaac, Laura dropped her shell on the road, and felt enormously relieved to be rid of it.

Now back to the reason we were in this scenic town: Elmina Castle. This structure never housed any royalty. Initially, it was built as a trade center by the Portuguese who first explored the Gold Coast. It changed hands several times, passing from the Portuguese to the Dutch to (I think) the Germans, finally ending up, after World War One, in British hands. Its use as a trade garrison gave way to a far more sinister purpose: a holding facility for African slaves, their last station before making the middle passage to the New World. Here slaves acquired from African traders were held in conditions not unlike those of cattle in a stockyard awaiting butchering, crammed into dank, dark rooms with little or no food, water, or ventilation. Those hardy enough to survive were ultimately sent through the door of no return, onto ships that further pared down their numbers to the strongest individuals while simultaneously breaking their spirits. Periodically, the governor would survey a courtyard where the most attractive women were permitted a brief time in the sun, and pick one to be cleaned up and brought to his bedroom. Once he was through with her, she’d be sent back into the cell, molested on the way by any guard who wanted to use her. 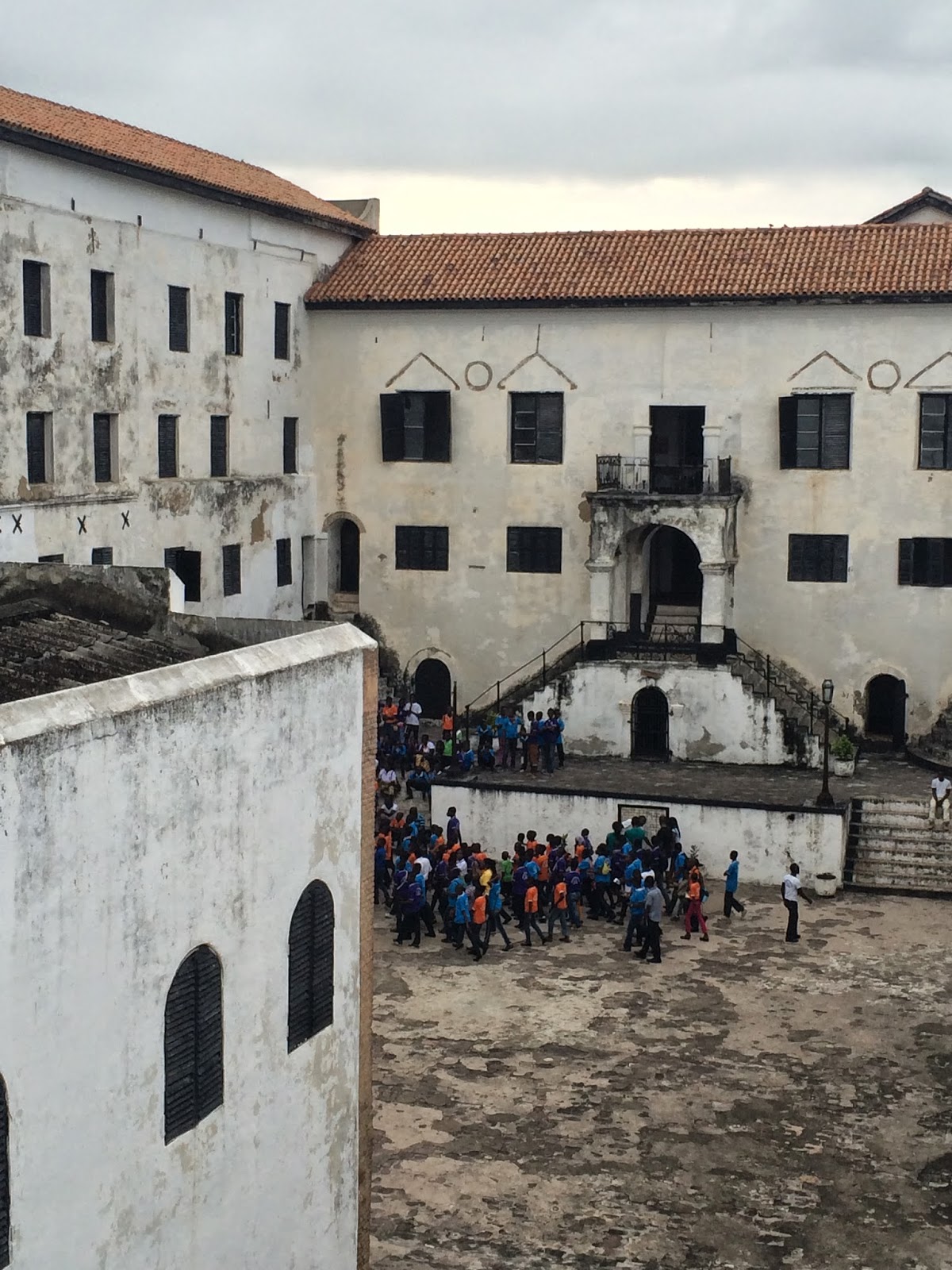 These castles dot the Gold Coast, and led to its renaming as the Slave Coast. Visiting this place as a member of the dominant culture that engaged in this genocide and continues to benefit from the cheap labor of the millions torn from their homes and forced to live in a foreign land, working to build a nation that would someday be the world’s greatest democracy, is an experience that blasted me with collective guilt. The only thing I’ve ever done that compares was visiting the Dachau Holocaust Memorial outside Munich. So much suffering, inflicted for the most arbitrary of reasons. Every room we went in to closed in on us.

The location of these castles is not just a memorial to the peculiar institution that built the New World. Africans were complicit in this trade. White slavers could not venture past the coast; as I’ve written elsewhere in this blog, West Africa was the white man’s grave. Malaria, yellow fever, cholera, diphtheria—there are so many tropical diseases present that coming here prior to the advent of prophylactic medications was a death sentence. If there were to be slaves, they had to be acquired by Africans.

Kofi took this on as we left the castle, telling us that slavery in Africa was not unlike slavery in the Roman Empire. Slaves were more like indentured servants, acquired as prisoners of war, debtors, criminals and, unfortunately, victims of raids, as more belligerent nations realized how lucrative the slave traid could be. But Africans who enslaved Africans granted them some mobility, even the possibility of buying their freedom. Slavery as genocide is a concept so alien to African mores that, had they known, the salve trade with the west would have ended hundreds of years earlier. This makes some sense, but it seems like speculation to me. At its heart, whether or not slaves were treated better by their African masters, it was and is a practice that it is reprehensible. The most important point here is that the degree of savagery exacted upon slaves by white masters dwarfs that inflicted by Africans.

The bottom line for me is that it took western civilization to make the slave trade what it was, and as a white American, I bear at least some culpability for this abomination—though far from the only one that would benefit our nation. European pioneers nearly wiped out the Native American population, ironically using the same weapon that kept them out of Africa: disease. The USA has taken great strides to make amends with Native Americans, but has done little to repay African-Americans for the trillions of dollars worth of labor involuntarily extracted from their ancestors. It took just years for West Germany to pay reparations to Israel for the Holocaust. A century and a half after slavery was abolished, the most democratic and inclusive nation on the earth still has not paid a penny in reparations for slavery.


And here is where Isaac’s shell game connects with a far deeper issue: if, as Benzola said, to take a tchotchke one does not deserve, and never to pay for it, is to be haunted by the spirit of that object, who much more must my nation be haunted by the spirits of the millions we took from their homes, the millions more we slaughtered on the journey, the generations who were born, grew up, and died slaves, all these people we took and used and never ever compensated in any way? No wonder America is consuming itself with discord. We’re haunted. Somehow we need to find a way to pay for what we’ve done. And the word for that is reparations. 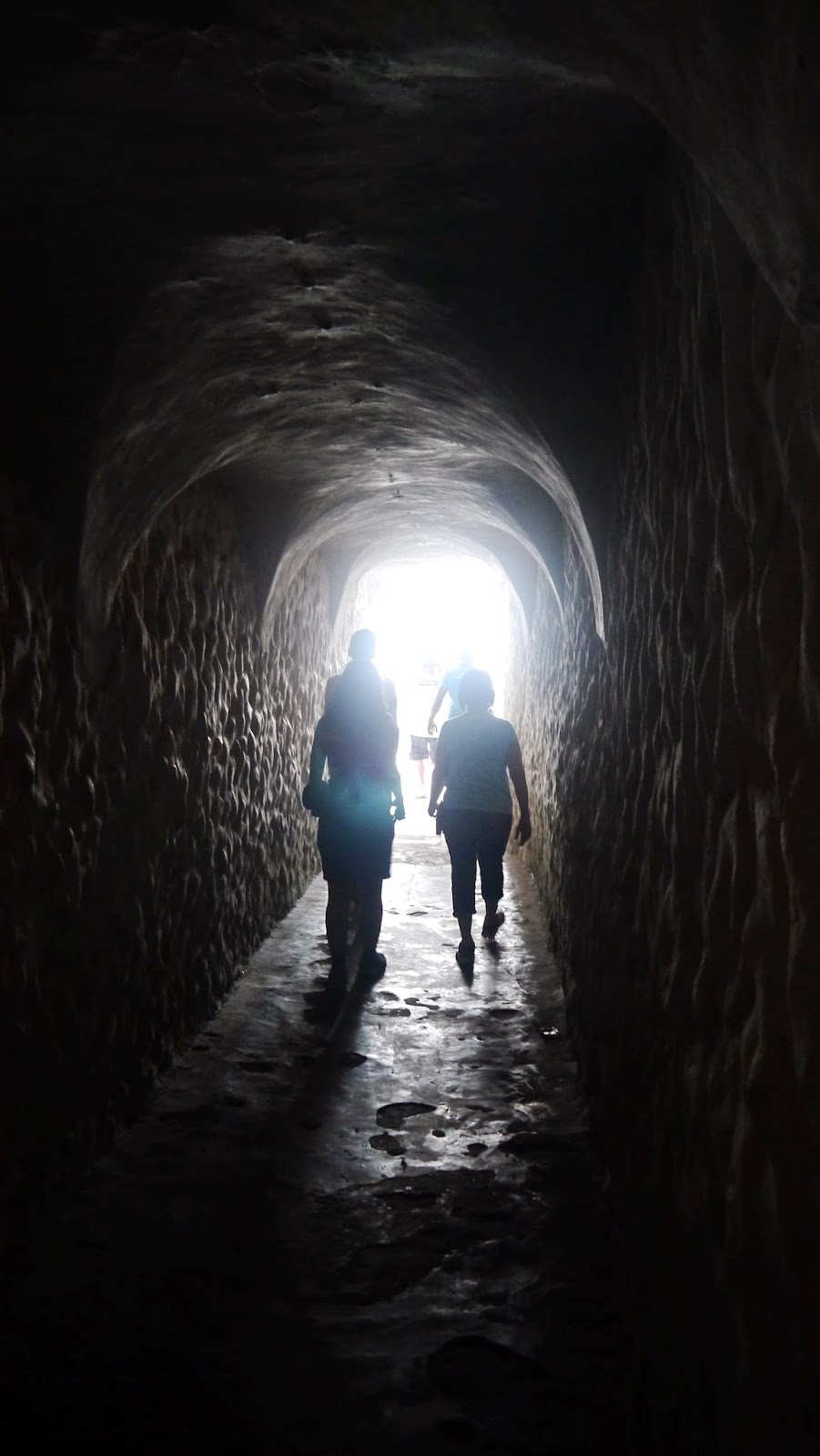