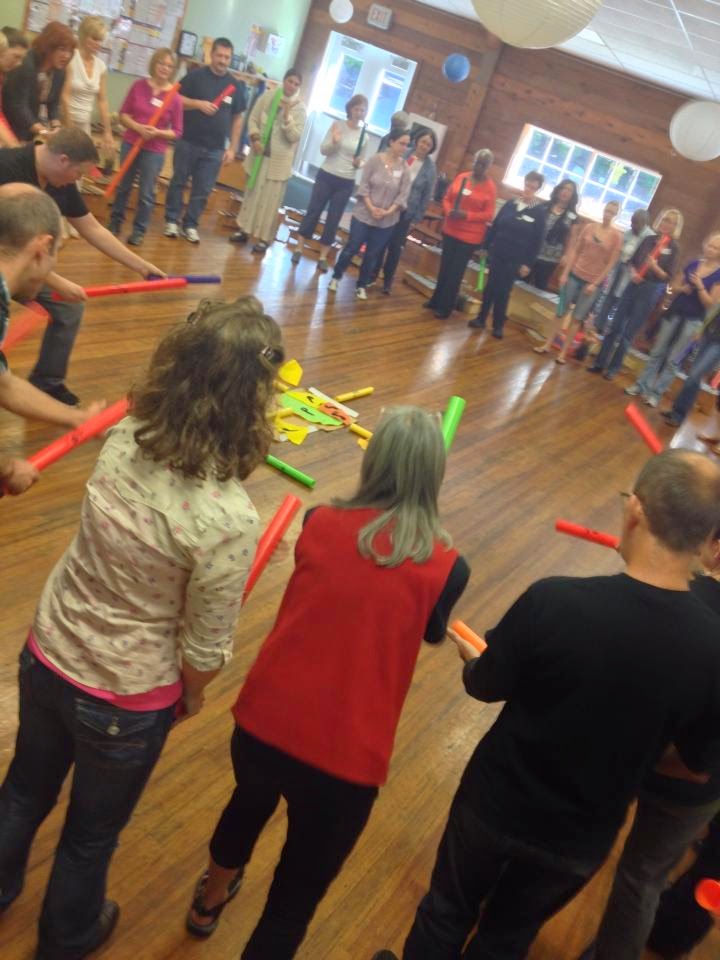 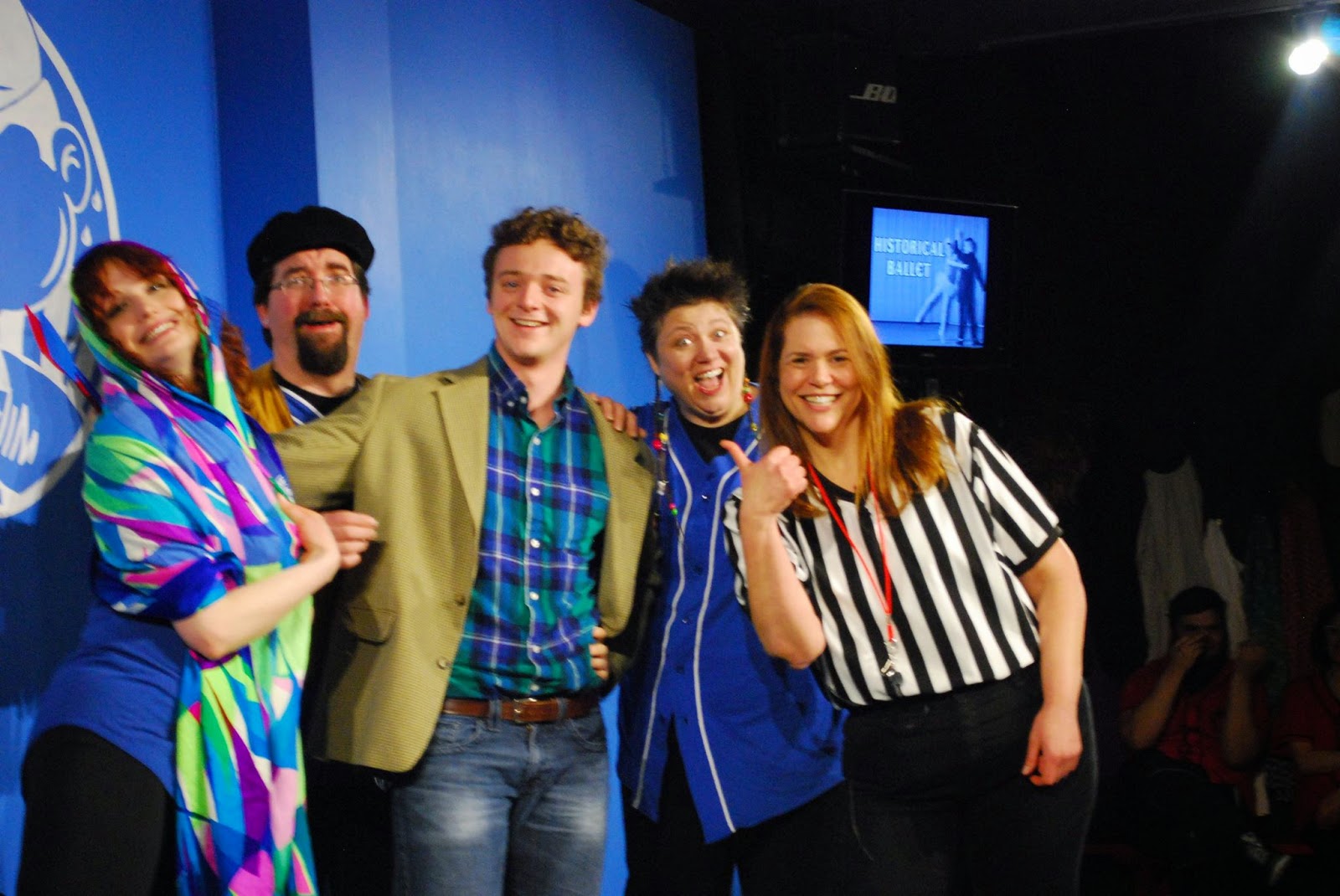 I could not have been happier.

Saturday I saw two of my favorite philosophies come together. These are approaches that have changed my life in spectacular ways, freeing me up from decades-old hangups to be funnier, more creative, more relaxed, and a far better teacher, father, partner, and human being.

Some background: my career as a music teacher officially started in 1984, when I took my first full-time teaching job. That job lasted for eleven weeks. I spent the rest of the school year subbing, and by the time summer had arrived, had made the ridiculous (but far from unprecedented, given my age of 24) decision based on that one year that it was never going to get better, so I should become a minister instead. I spent the next fifteen years living with the consequences of that decision, finally leaving ministry behind in 2000 and returning to classrooms in 2002, first as a sub, then, in 2003, as an elementary music specialist. For two years, I did my best to figure out how to do this work, drawing mostly on the canned curricula already in place in the two schools I worked at. Then, in 2005, I had my first exposure to the Orff philosophy, and never looked back.

For four years, I learned to teach the Orff way through workshops, summer training, and just plain doing it. This is the Orff genius: learning through the body by singing, playing, dancing, feeling. By the time I was laid off from Banks Elementary School, I had internalized the approach.

That lay-off lasted for four years, counting the two I worked as a half-time band/choir director. I received levels II and III of my Orff certification during that time, but what made a far greater impact on my teaching was number two of the philosophies I mentioned above: improv.

Losing my teaching job coincided with the first stages of my relationship with Amy Milshtein, who was, at that time, a member of the ComedySportz Portland "Farm Team." I had an inkling of what it was all about thanks to the venerable TV show "Whose Line Is It Anyway?" which I first saw in its original, British, incarnation while I was living in England from 1988-90. I loved this stuff, even used some of the games I saw in the show as the basis for a party I hosted in 1990, but I had no idea how to make it part of my life. It festered within me for almost twenty years, occasionally fed by watching the American "Whose Line," but never to any kind of fulfillment. But then came Amy, and my first experience of a Farm Team show, followed soon after by a half-day Orff workshop led by Eugene teacher David Adee about how to integrate improv games into the Orff classroom. That fall (2009), I began playing keyboards for the Farm Team, and then in January 2010, was invited to play for the Pro Team. I've been doing it ever since.

Those summer Orff Level trainings gave me a clear sense of how naturally Orff and improv could and should work together. As a half-time high school music teacher, I began plugging improv games into my choir's warm-up time. And then, a year ago, as the Portland Orff Schulwerk Association began planning for the coming year's workshops, I suggested having Patrick Short, founder and co-owner of Portland ComedySportz and a brilliant musical improviser, lead our spring 2014 workshop. It took some convincing, but finally, I won the board over, and on Saturday, we had our workshop with Pat. 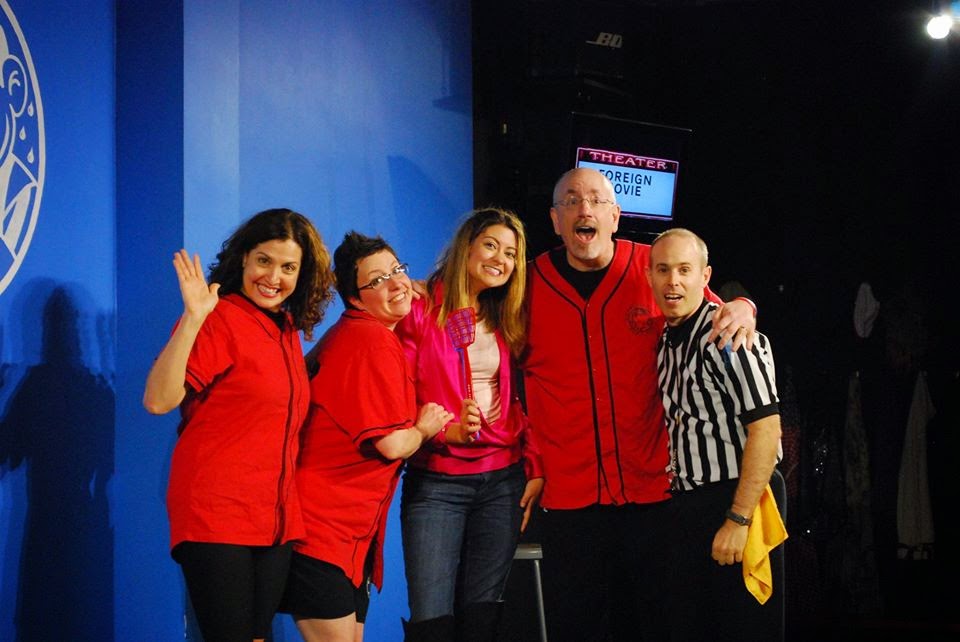 Pat Short is the tall guy in this picture.

There are many similarities between Orff workshops and improv workshops. The emphasis is on creativity in a group setting, on activities that free up participants from their hang-ups and help them make something together. Both Orff and improv must be learned by doing. Yes, the theory and principles can be acquired from text, but one can only teach and act this way by teaching and acting this way. The more one does it, the better one gets at it.

The Orff teachers gobbled up the first half of the day, which was all about moving around, messing with brains, loosening up the body, interacting in creative ways, and learning how to say "Yes" to unanticipated moments. Ironically, it was the music games, which came after lunch, that found the participants most inhibited. As I explained it to Pat afterward, Orff teachers are all about improvising melodies--and they did that, beautifully, in an opening warm-up mixer activity--but when it comes to putting words together, we find ourselves at a loss. In fact, the most effective Orff teaching is done wordlessly, except for teaching lyrics. My best lessons are those in which I speak only a handful of words, using my body at first, then gradually adding other instrumental sounds, to create a rhythmic and melodic texture that conveys all the concepts I want to teach.

By the end of the day, I found myself delightfully affirmed by what had transpired. I believe more deeply than ever that improv training and experience can make any teacher more flexible and relaxed, able to handle whatever arises in the classroom; but that, much more than that, Orff and improv can and should work hand-in-hand. Saying "Yes, and..." to a student's idea can transform a piece, personalizing it for the class, motivating every child to be more creative, and often making the piece itself far more memorable to the audience. Letting go of outcomes, accepting that where a lesson is going may bear little resemblance to whatever result I have in mind, but that the journey itself is what matters, continues to be the secret to turning a day of frustration into a day of magic. I'll continue to work to integrate Orff and improv as long as I'm a teacher.

There was one more personal note that surprised me about Saturday's workshop: David Adee was up from Eugene. During lunch, he reminisced with me and some other teachers about how improv led him to become an Orff teacher; how his very first improv workshop was taught, in 1995, by Patrick Short. Considering it was David's workshop in 2009 that turned me on to the possibilities of using improv in my own classrooms, and inspired me to dig deeper into what Amy was doing with ComedySportz, and that ComedySportz has been glue for our relationship, I have reached the conclusion that Pat Short is partly responsible for me being with Amy.

Thanks, Pat. You didn't just give us a great day of improv that will change the way many of us teach. You helped give me this life that I love, and the woman I share it with. Not bad for a guy who makes up stuff for a living.
ComedySportZ improv Orff Schulwerk Pat Short POSA
Location: Portland, OR 97229, USA