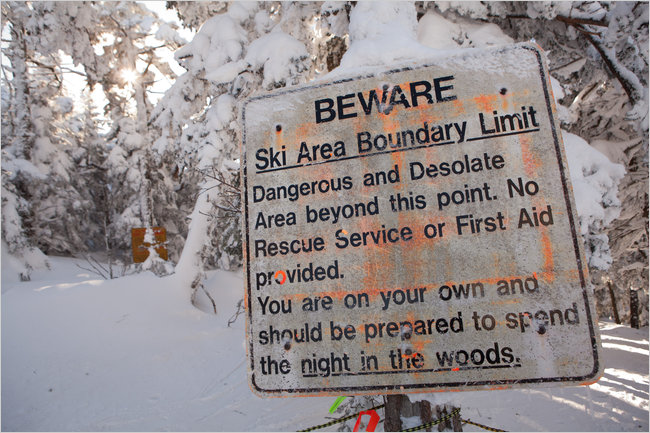 Some disclaimers:
1. We did not see this sign. This sign is in Vermont. We have never been skiing in Vermont. Yesterday we skied at Mt. Bachelor, though we were not on Mt. Bachelor. Mt. Bachelor is a downhill ski Mecca, and we are not downhill skiers. We do enjoy Nordic skiing, however, and at the foot of Mt. Bachelor is a network of Nordic trails extending for many miles.
2. We are not highly skilled Nordic skiers. I've been doing it since 2000, but only sporadically. The difficulty of getting to trails through quality powder (Mt. Hood's trails are usually either sloppy or icy, and Bachelor is a 3+ hour drive from Portland) means that by the time I find my skiing legs, the season's usually over. Amy has only been doing this for two years now, so she's even less experienced.
3. This was only our third time on skis this season--and also our last. We had a snow day in February, during which we were able to ski in our own neighborhood, and spent one day at Teacup Lake, our favorite Nordic area on Mt. Hood. It had been around two months since our last time on skis.

With all that said, here's what happened: we arrived at our condo (previously rented for MLK weekend, but abandoned after when night when I wound up with a horrendous cold) on Friday night. We were at Mt. Bachelor and on our skis by 11:30, sliding down the Common Corridor to Century Drive. There we arrived at a decision point: continue on the snowmobile-corrupted road to Todd Lake (lumpy chunks of half-frozen snow, no fun to ski on) or set off through the woods on a trail marked "Easy," taking what we assumed, based on the signage, was a 2 mile loop to Dutchman Flat and back. We chose the latter.

Apparently, we misinterpreted that sign, because it took us five hours to get back to the Nordic Center.

The trail took us up over a long hillside of rolling terrain, with many of the dips steeper than we cared for. We both took multiple falls, and found that, with the air temperature in the mid-30s, that even with fresh snow falling for most of the day, the surface was so slippery that any steepness at all led to sliding backward. I caught myself slipping far too many times, and quickly began developing some tendinitis in my right elbow. On top of that, while I have over the years mastered an effective technique for getting up from a fall without shedding my skis, Amy has not, and once she did manage to struggle back up, her bindings proved extremely uncooperative for clipping back in. By the time we finally came out of the woods, we were both tired and frustrated, and eager to have an easy trip back to the Nordic Center through a flat meadow.

That's when we discovered we had almost as far to go returning as what we had just labored through.

Now we started wondering if we'd bitten off much more than we could chew, if, in fact, we were going to wind up like the victims implied by the sign from Vermont I pasted to the top of this page: stuck in the forest, sleeping in a snow cave, having to be helicoptered out the next day, if we were ever found.

And then two snowmobiled pulled up, checked a map, and roared on down the trail.

We opted at this point to follow that same trail, though in the other direction, after consulting the same map the snowmobilers had looked at. We started off skiing down a long, winding, slippery snowmobile trail, and quickly changed our minds, opting instead for walking. This finally got us to Todd Lake. At this point we opted to return to a trail through the woods which started with an easy, short descent to a meadow, a little steeper than Amy was comfortable with but, I was certain, easy enough for both of us. I took it first to prove how easy it would be...

...and did my first face plant ever. Spitting snow, I rolled over and started getting up, shouting that I was okay. Amy, to my surprise, decided to ski down the hill, just as I had done. Her face was planted within a foot or two of where I had gone down. She also twisted her knee painfully, and four days later is still limping.

We dusted ourselves off, hit the trail, and had a fairly uneventful climb back to the Nordic Center, arriving back at the car not quite five hours after we had started our adventure. We were both in pain, Amy from her leg, me from my elbow, and I nearly flung the skis into the trunk, happy to say goodbye to this sport for another year.

Lessons learned:
1. Take a map. Check progress against that map frequently.
2. Don't believe signs unless you can verify what they're telling you on the map you brought.
3. Don't count on any downhill being as easy as it looks.
4. Get more short workouts in before attempting something that takes as long as a marathon (though to be fair, we were expecting the trail to be two miles of easy, not however many miles it was of challenging--but see lesson 1 for why that's no excuse).

And why would we ever want to do this again? Why am I already wishing I could find another weekend before the snow turns completely to slush?

Because there in the woods, with skis gliding easily along a well-marked trail, I found a peace that transcends anything I've ever had in a church or shrine. Because for all the calories we burned and muscles we worked, I didn't feel sore (except for my inflamed elbow) until two days after we'd done this (contrast that with marathons, after which every step is agony). And because, as Amy and I like to tell each other anytime the going gets much rougher than we bargained for, what we love most about our life together is "Adventure!"
adventyure cross country skiing Mt. Bachelor Nordic skiing
Location: Mt Bachelor, Deschutes National Forest, Oregon 97701, USA