A Wild and Crazy God 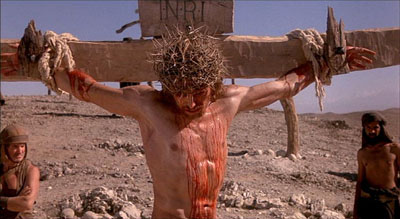 It begins Sunday for Christians, Monday at sunset for Jews. For both faiths, it is the holiest time of the year, the time that defines them as a people chosen by God to witness to the world. Both holy weeks revolve around the life of a reluctant savior, a man empowered by God to deliver others from misery and death. One was a prince who abandoned his royal inheritance to become a shepherd, until God spoke to him in the wilderness and directed him to liberate all his people. The other was a common laborer who, after a pilgrimage in the wilderness, became a shepherd to a small sect of his people, but who, after his death, was exalted by a growing body of followers who called him Prince of Peace. The one died of old age, gazing from a distance at the Promised Land he would never enter; the other died young, executed by an occupying power for his dangerous ideas, which included the teaching that all the earth could become a Promised Land.

There I will end my listing of parallels between Passover and Easter, without even mentioning the Paschal Lamb, because there is a fundamental distinction between these holy days. Passover is about an active God, a God who is powerful, temperamental, and intimately involved in the lives of his people, even though he seems to have been absent for enough generations that the nation that made them honored guests has been able to enslave them. Easter's God is passive, permitting his only son to die horribly, abandoning him on a cross.

And yet, both these understandings of God are compatible in a way that makes modern believers extremely uncomfortable. The God they describe is wild, crazy, unpredictable; hardly the tame, faithful God we've all come to know and ignore.

Consider the story of the Exodus. Pharaoh has enslaved the Hebrews, and has subjected them to increasingly harsh living conditions, slaughtering their male children. Moses, a Hebrew raised as an Egyptian prince, returns from his long exile to demand that Pharaoh release the Hebrews. Pharaoh refuses. To change Pharaoh's mind, God unleashes a series of plagues upon Egypt. After each, Pharaoh hems and haws, promising release but then changing his mind, until finally, God launches the ultimate plague, one which gives the Egyptians a taste of what they did to the Hebrews: all their first born children die. Pharaoh finally relents, and the Hebrews flee, only to find themselves caught between the Red Sea and Egypt's advancing army, for Pharaoh has, for the last time, changed his mind. God leads the Hebrews through a parted sea, then drowns the army. The Hebrews wander forty years in the wilderness, where God alternately cares for them and punishes them, sometimes with mass execution, for their disobedience of one rule or another that they are now expected to follow, until finally they cross the Jordan into the Promised Land.

This is not a God to mess with. Try it, and this God will mess you up.

Now consider the story of Jesus in Jerusalem. On Palm Sunday, Jesus enters the holy city riding on a donkey, an animal of peace rather than war. In the city, Jesus offends temple officials by knocking over the tables of money-changers, then moves about preaching his seditious gospel, drawing the attention of Pontius Pilate, the Roman procurator. In the end, he is betrayed by one of his followers, put on trial, and executed. Through it all, God is apparently silent, refusing to answer Jesus' prayer to be delivered from his fate and, most appallingly, allowing him to die as a common criminal. Where is the God who was so intimately involved in first liberating and then leading the Hebrews out of Egypt? Where is the God whose power could send locusts, frogs, flies, diseases, death to the Egyptians, who led by pillars of fire and cloud, and who parted the sea? Silent, absent, and, apparently, powerless, not to be counted on in the most desperate of situations.

This is a God who can be messed up. Do whatever you want to this God, and walk away unscathed. This God is more crazy than wild.

In either case, we are not dealing with a tame God here. God is dangerously present in the Exodus, and dangerously absent from Holy Week. Passover is a time of celebrating God's activity; Holy Week a time of wondering about God's passivity. Only on Easter morning is there a promise of some kind of quiet, mysterious victory, a Resurrection that is hushed, secret, revealed only to a few, hard to pin down as any kind of concrete reality.

Personally, I'd rather have the latter, but it scares me, too. I am afraid of the busy, capricious God of the Exodus, whose power can so quickly move from redemption to destruction; but I'm also afraid of a God who might not be there when I need him most, who might very well abandon me in the same way he left Jesus to die. When I call for God, I don't want the line to be busy. Granted, I might get far more than I was asking for--would I really want Biblical plagues visited on my tormentors?--but at least it would be good to know some kind of help was on the way, even if it was of the plague variety.

The latter God is, however, far more compatible with an enlightened mindset. It's been a very long time since anyone experienced God in the ways the Torah describes. In fact, all the really big miracles in the Bible happen in those first five books. Once the Promised Land is reached, what miracles remain are on a far smaller scale: healings, feedings, writing on a wall, visions on mountains. The New Testament continues in the muted miracle mode, primarily focusing on healing and feeding. Jesus calming a storm and walking on water are exceptions that come across primarily as Jesus showing off in order to test the faith of the disciples, but most of his miracles are interpreted by him as eminently doable by any ordinary Christian with a mustard seed's worth of faith.

And that's the biggest rub of believing in the God of Jesus: the responsibility for doing something in the world devolves on the believers, rather than the believed-in. The God of Genesis and Exodus appears to have retired to a celestial beach house, leaving the management and production of the cosmic factory in the hands of the workers. "If it's to be, it's up to me" is the cliche that comes to mind.

Meanwhile, for Jews, the God of Passover has suspended operations for the duration. The great works of the Exodus mark the effective end of divine intervention in the world. Everything after that is salvation history, God struggling with the supremely flawed instrument of humankind to eventually accomplish the perfection of Creation. Again, it's up to us.

Passover looks back on a God who was frighteningly involved in the world, catastrophically disrupting natural law to save a group of people so that they might, eventually, bring about the redemption of Creation. Over time, this people came to realize the days of intervention were long past, and settled into a faith of patiently waiting for that redemption to take place. Easter, in turn, ascribes a few latter-day miracles to that same God, but then sits its own believers in the same boat, placing their faith in a God who will at some unforeseeable time make the broken world whole. In the meantime, both Jews and Christians find themselves sharing their lifeboat with agnostics and even atheists, living the most moral lives they can despite--perhaps even because of--the absence of a wild, crazy, interventionist God.
agnosticism atheism Death of God Easter Exodus God Holy Week Passover resurrection
Location: Portland, OR 97229, USA