What a Difference a Ring Makes 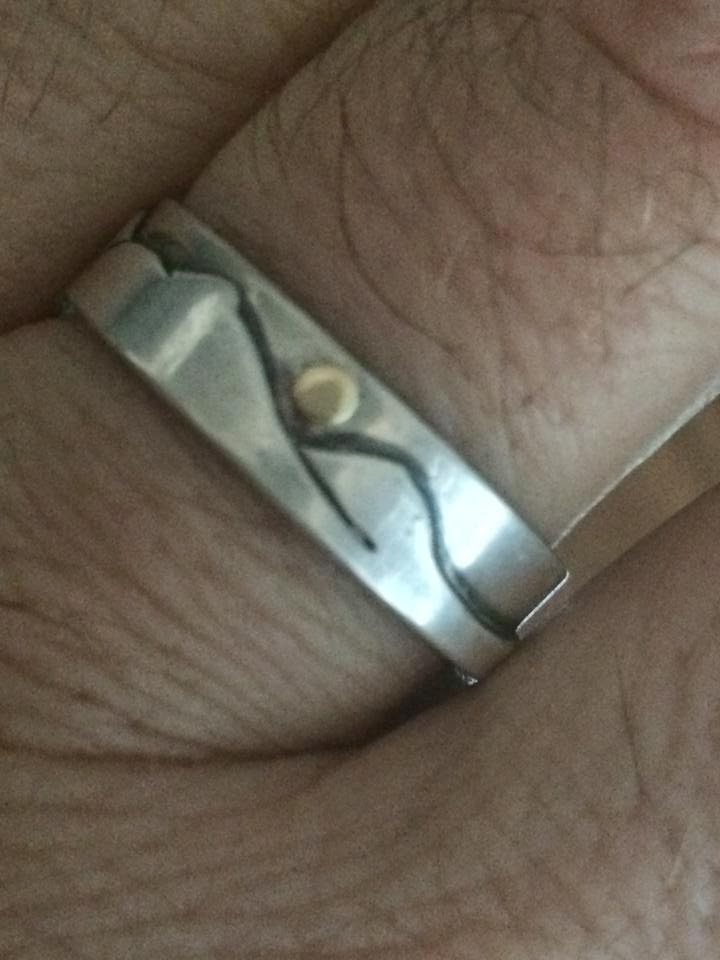 It shouldn't make that much of a difference, yet somehow, it does.

Amy and I have been a couple for five and a half years. We've been living together for four of those years. Three years ago, I declared Amy my domestic partner and added her to my health insurance plan. Two years ago, we started calling our relationship a "mountain marriage." And less than a month ago, we started signing papers and putting money down to buy our house together. After all that time, you'd think that saying a few words and putting rings on each other's fingers would be a mere formality. Clearly we're in love and dedicated to being together for a very long time, so why make a big deal out of these circular pieces of silver? Is there really anything different about the relationship since putting them on?

For nine days, I've been in a state of euphoria. It's not overwhelming or incapacitating--I can still drive, read, do the crossword, write this blog--but it's always at the edge of my awareness. I look down at my hand, and there's the ring. Amy looks up from playing cards with Sarah and me, and starts to ask when I started wearing a ring, then remembers and blushes. It's different, really, truly different.

It took me about a day to get used to having the ring on. In fact, on Friday, when we picked them up from the jeweler who made them for us, and I tried it on, it felt uncomfortable, though I quickly realized that was just the weirdness of not having anything on my fingers for fifteen years. Now I mostly don't notice that it's on--and then suddenly I do, and I smile as the happiness again washes over me.

Wearing the ring means we no longer have to awkwardly grope for what to call each other. I can say "my wife" rather than "my partner" in reference to Amy, and not have people jump to the conclusion that I must be gay. And I don't have to explain "mountain wife" anymore; "wife" will do it.

"Wife" will take getting used to, though. I'm trying it on for size in conversations, and I still can't believe I'm saying it.

It took us a long time to be ready for this. Apart from my previous marriages, my family is known for long engagements, but five years takes the cake. I've been married twice before, the second one ending in 1999, and while I was engaged once between then and now, I really was not in any hurry to be married again. Marriage had treated me badly, chewed me up, spit me out, broken all the promises it made to me, left me pretty much for dead, and I didn't want anything to do with it. The broken engagement just underlined how brutal this institution can be. If I was ever to marry again, it must be to someone whose eyes, like mine, would never again be clouded with romantic fantasies. We would walk into this fully conscious of what we were doing, cognizant of how badly it could all end if we weren't intentional about maintaining our relationship. Marriage, we knew, is like a sports car: when it's well-maintained, it's a dream to take out on the road, but miss a scheduled service, and you're asking for a breakdown.

We came into this incrementally, as I said above. Our appreciation for each other has grown and matured over the years, and yet we still find ourselves having misunderstandings, impatience, resentment, jealousy, all the things Marc Maron complains about in the introduction to his weekly podcast. We have them, but they do not overtake our essential love for each other. We acknowledge those feelings when they arise, address whatever issues may have birthed them, talk about them in the safe place that is our personal couple space, and we are able, again and again, to transcend them.

I think it's the way we stayed true to each other through these hard times that most convinced me we were right for each other, that of all the people I've ever known, Amy is the one I can absolutely trust to be honest about her own baggage and to bear with me as I unpack my own.

I speculate sometimes about what it would've been like if I had met Amy at the beginning of my adult life. What if we had come together in the 1980s, instead of waiting until 2009 to meet? Could we have spared each other the heartache of what we went through in those other marriages?

That's an easy fantasy to dispel, because the person I was in my 20s could not possibly have been a happy partner for Amy; and I'm pretty sure the Amy of 1986, the year of my first wedding, would not have seemed at all like the woman for me. We were different people then. The nearly 30 years that have transpired since I first made wedding vows have changed me. In those days, I had no sense of perspective. The slightest argument terrified me that my marriage was going to end (which, of course, it eventually did, but that's beside the point). I had so many insecurities to process, so much buried anger and resentment from my childhood, so much therapy yet to come.

So Amy gets the housebroken Mark, the Mark who's passed through one ordeal after another, who's spent enough hours in counseling to put several therapists' children through college, the Mark who understands marriage far better than he ever could have back in the days when it was the one thing he most wanted for himself. The Mark of 2014 is over that. He no longer has a bride-shaped hole in his life. He did want to be married, but not just to a placeholder. He wanted to marry Amy Milshtein.

And he did. I did. Driving to and from our honeymoon, I would glance over at Amy from time to time, watching her nap, and feel that wonderful warmth of knowing this is my wife who is resting so securely beside me. As I lay in bed this morning, with her head on my shoulder, I tried that out again, reminding myself this is my wife, and it felt right, true, and wonderful.

Besides saying words, besides hearing our loved ones say lovely things about us, besides exchanging rings, we engaged in one other ceremonial act at our wedding: we wrapped burned out light bulbs in towels and crushed them beneath our feet. The tradition of breaking glass at a Jewish wedding symbolizes the destruction of the temple, as well as the ending of the old life. For us, it certainly has that connotation as well, but the fact that we used old light bulbs adds an extra dimension: these were a relic of the 20th century, a lighting product that is being phased out. All our future lights will be either compact fluorescent or LED. Similarly, the breaking of the glass reminds us that our youthful concept of marriage was obsolete. We are making a new marriage here, a marriage far more efficient in its expenditure of energy, a marriage in which we can cut quickly to the problem solving without first spending days in sulking and expecting our minds to be read by each other.

We have a marriage based in trust, understanding, dedication, and above all else, love. The mountain pattern on our rings reminds us of the hard work we did coming together, and also that there will be many more alpine trails ahead of us. Sometimes they will even be on actual mountains; more often, it will be some obstacle life throws in our way (like having to buy this house!). Whatever it is, we'll share the trail together, encourage each other up the steep parts, kiss in the middle of every bridge we cross, and when we finally reach the top, we'll take a selfie, kiss each other again, celebrate the accomplishment, and start back down.

So it's not just a ring. It's more, much more. It announces to the world, and more importantly, to us whenever we look down at our hands, that we are married, wrapped up in this thing forever, husband and wife.