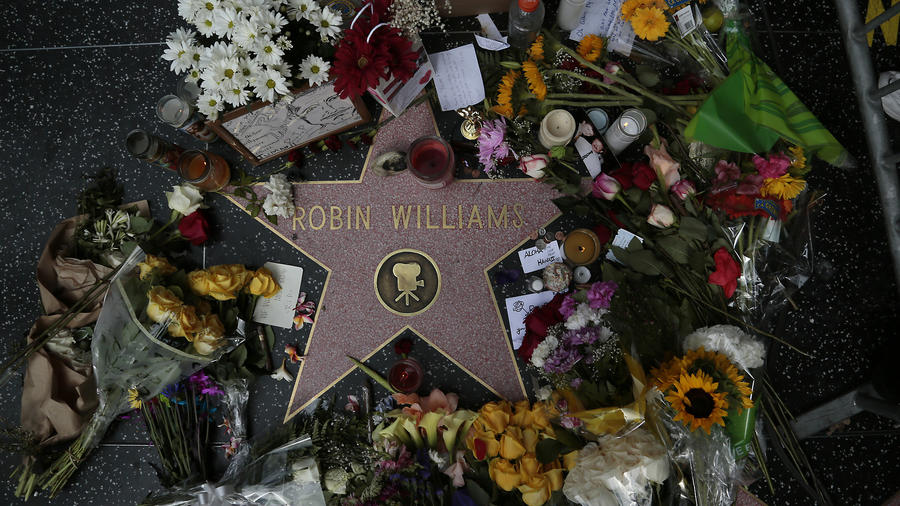 America has a grief problem.

Thank you, Bill Evans, for drawing my attention to this essay by Will Leitch in which he takes on the Robin Williams grief train so many are jumping on. If you're on Twitter, Facebook, or any other social media site, you've seen the steady stream of tributes and remembrances adding up to a virtual canonization of an actor/comedian with a spotty filmography and few quotable bits. Certainly he projected warmth and compassion as few entertainers can, and his basic humanity shone through his manic standup performances; but as Leitch observes, had anyone, on Monday morning, waxed rapturous over Patch Adams, Jumanji, or Night in the Museum, it would've been a short train indeed. Once his suicide became public, though, it was as if there was not a false note in his career, and everything he did was but a piece in the larger masterwork of his soon-to-be-sainted life.

I will admit to being one small part of this phenomenon: I posted a piece on depression, using the death of Robin Williams as my jumping-off point. But that was it. Yes, I enjoyed a number of his performances, and was especially fond of Mork and Mindy (though only when he was onscreen) during its first two seasons; but except in his purely dramatic roles, I haven't found much to like in what he's done in a very long time. Mostly his manic improvisations seemed tired, shopworn, cliched. What was telling to me in his death was the sense that, however successful he might be, however many accolades he might receive, none was sufficient to overcome his essential loneliness.

Perhaps this is what America has been responding to in its monsoon of mourning. As a people, Americans have always associated two things with happiness: fame and fortune. Who in our world has more of both of these than a movie star? To learn that someone who, in popular terms, has it all is also in so much pain, and who, for all his public emoting, has rarely revealed that pain, and now has taken his own life, is to realize that we have been lying to ourselves. If wealth and popularity cannot bring happiness, then why are we all working so hard to achieve them?

This is our national tragedy: that which we strive the hardest to achieve is ultimately empty, vanity, a longing after wind. Giving up this dream rends us to the core. And that, to my mind, is why so many are so torn by the suicide of Robin Williams--and, hopefully, also reminded of that which really matters in their lives, not the toys, not the recognition, but the family and friends they hold dear.

Set that aside now, because I'm going to take a different direction for the rest of this piece. Leitch writes of the death of Robin Williams as if his post mortem accolades are an invention of our linked-in social media internet age. He has a point to this extent: prior to the Facebook Era, the outpouring would still have been omnipresent, but it would have been confined to the fourth estate: newspapers, magazines, television programs. With the ability of so many to be online and participating, the tributes proliferate geometrically.

The canonization of the dead, though, is as old as the memorial. As a pastor, I presided over far more funerals than I care to remember. While I often found these events to be deeply meaningful and rewarding, I also frequently had to bite my tongue at the way in which individuals who had, in life, been difficult, obnoxious, selfish, rude, a burr in the saddle of every person who spent more than a few minutes with them, were abruptly transformed into saints. No, they didn't merit millions of tweets--Twitter was still years from being invented when I left the ministry--but their funerals were a time for apotheosis. It's what we do when someone dies: we work to, as best we can, remember that person well, and to speak well of him or her. That can be difficult, but we do our best.

If said decedent was wealthy, powerful, or both, then the apotheosis took on far greater, more tangible form. In 1989 I toured Westminster Abbey, the large church in London that is the resting place of kings, queens, nobles, and artists. Throughout the abbey, one sees ornate tombs, topped with effigies of persons of royal lineage that nobody remembers because, quite simply, they didn't do anything worth remembering. Then one comes to Poets' Corner, a place in which the names of great authors are inscribed on the floor. There are no pictures, no statues, nothing but names; and chances are good that you've heard most of them, probably even read some of their works. These people are remembered not for who they were, but for what they did.

Robin Williams will, probably, be remembered for a very long time for the ways in which he shaped American comedy. Those who had personal encounters with him will tell those stories again and again, until they become part of family folklore. A few of his movies may even be viewed in coming decades. Mostly, though, I expect his memory to fade.

But those of us who were brought up short by his sudden death, who took time to examine our own lives, our own values, and to feel some grief at the erosion of the American Dream: we will have something to remember for the rest of our lives. And perhaps, having jumped on the grief train, we can choose to jump off the prosperity train, the popularity train, whatever train it is that we now suspect is not nearly as important as we once thought it was, and instead to reach out to the people around us who are, in the final analysis, all that really matter.
grief mourning Robin Williams
Location: Portland, OR 97229, USA