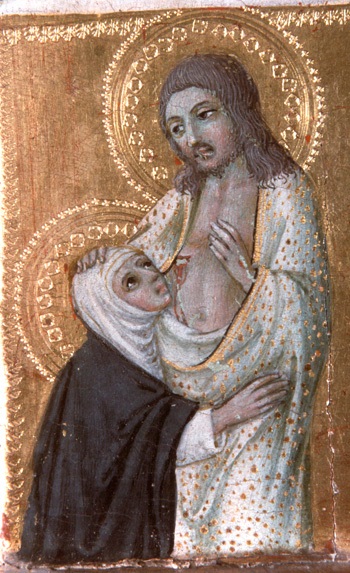 Catherine of Siena drinks the blood of Christ.

This is going to get theological, philosophical, and gross.

Much of my young adult intellect was wrapped around the two sacraments recognized by the United Methodist Church. A sacrament, in the traditional Methodist lingo I grew up with, is "an outward and visible sign of an inward and spiritual grace." More concretely, it's a ritual that gives believers a tangible experience of the ineffable. Methodists recognize baptism and communion as sacraments. In baptism, the believer is symbolically drowned so that he or she can be resurrected to new life as a Christian. In communion, the believer eats a small bit of bread and drinks a sip of wine so that he or she can be sustained by the symbolic body and blood of Jesus Christ.

Although I grew up in Methodist parsonages, my parents were always Baptists at heart, and held off having any of us baptized until puberty, at which point my father found an immersion baptistry and had whichever son had reached the age of proper consent symbolically drowned. Thus I arrived at seminary already in tune with the idea that a sacrament ought to be big and significant: being dunked was always preferable to being sprinkled, and the communion elements ought to include a real hunk of bread, rather than a wafer (though it took me a number of years to get past my teetotal Baptist instincts and accept the idea that real wine was also preferable to Welch's grape juice). The more senses involved, and the richer the sensations, the more powerful the symbolism.

But here's something to consider: just how powerful should those symbols be? And how important is it to hang onto the historical roots of the sacraments?

Communion has its tangible roots in the Passover feast, and the ritual consumption of a paschal lamb and several cups of wine to symbolize the blood smeared on Hebrew doorsills to let the Angel of Death know not to visit their households as every other firstborn child in Egypt was slaughtered. This symbolic act--the sacrifice, the blood--resonated strongly with early Christians as they sought to understand what had happened in the crucifixion of Jesus. Atonement theology--that Jesus died to take away the sins of the world--grew out of it. And while Christians sought to distance themselves from Jewish practice but not actually sacrificing a lamb, saying instead that Jesus was the one definitive Lamb of God, they did continue the practice of periodically reliving that atonement, symbolically eating and drinking his body and blood, just as he had, according to three of the gospels, told them to do during his final meal.

Maintaining this belief was so central to the church that an elaborate doctrine grew up around it: transubstantiation, the belief that the bread and wine literally become the body and blood of Jesus, even though they continue to appear to be the same elements they were prior to being blessed by the priest. One of the heresies of the Reformation was the Protestant effort to move the sacrament more solidly into the realm of symbolism known as consubstantiation. In the opinion of Martin Luther, the body and blood of Jesus now existed alongside the elements, so the believer was no longer literally engaging in sacred cannibalism.

If you did not grow up in the church, and are just being introduced to this "body and blood" language, you can be forgiven for asking the cannibalism question. Early Christians came up against it all the time, as rumors spread that they literally ate flesh and drank blood at their love feasts. They might attempt to argue that it was "only a symbol," but as soon as the word "only" comes into play, one is cheapening the rite, downplaying it not just to the audience but to oneself.

So it has gone for almost two millennia as Christians have sought to explain this unfortunate terminology. Efforts to change the language--"bread of heaven, cup of salvation"--remove it from its roots in atonement theology. Altering the framework of the rite as holy mystery, saying words like "this is for you" or "God loves you and so do I," raise the question of why this has to be done with bread and wine. Associating it with a different scripture story--manna in the wilderness, the feeding of the five thousand--removes it from the passages in which Jesus literally prescribes the practice, using the words "this is my body" and "this is my blood."

On the other hand, body and blood imagery is increasingly a problem for people whose primary experience of the metaphysical is popular horror imagery. Zombies eat flesh; vampires drink blood. Books and films about such occult beings often use them as metaphors for social trends, including religion. The HBO series True Blood has created a vampire version of the Judeo-Christian creation myth, then pitted fundamentalist vampires against reformers who sought to replace human blood with an artificial substitute--just as Christians have, from the beginning, substituted wine for the actual blood of Jesus, which was itself substituted for the destruction of humankind by a wrathful God.

Sunday morning, I attended the twentieth anniversary celebration of the Church of the Good Shepherd, an independent, progressive African-American congregation in northeast Portland. For five years, I was their pianist and frequent preacher, and it was good reconnecting with these wonderful people, as well as introducing them to Amy. The service included communion, as it always has from the founding of the church by the late Rev. Willie Smith. Because we were worshiping in a park, rather than in the sanctuary, we each received a portable cup containing both de-alcoholized wine and a wafer:

I received my cup, and returned to my seat; Amy, taking seriously the words "all who are baptized are welcome at this table," chose not to. I peeled back the plastic, ate the bit of styrofoam-like host, then peeled the next layer and knocked back a shot of wine-like juice that burned going down; and was reminded of how strongly I had always felt that the bread should be real, substantial, and tasty, and that one should be able to get a good mouthful of whatever was in the cup, whether it was wine or grape juice. I could tell that, apart from the "all who are baptized" language, Amy was put off by the body and blood imagery.

Frequent communion used to be an important part of my own spirituality, but I've grown away from it, in large part because of its connection to the atonement. At some point, I found myself questioning what kind of a God would send his only son into the world, then require that he die horribly to satisfy his Father's bloodlust. That's what the atonement is really about: humans are so sinful that God's anger had to be appeased by the death of Jesus. A good who would require such a thing is not a God I want to worship; and a sacrament that symbolizes such a theology is not one of which I wish to partake.

There are plenty of other symbolic reasons to celebrate communion: the symbolic invitation of all Christians, everywhere, to a common table; the providence of God, sustaining us through the week; the humble acceptance of grace; and I could go on. As I said, I spent fifteen years thinking about what the sacraments mean. But then I stopped, because at root, I realized their fundamental meaning was fixed on the vengeful God who demands satisfaction for sins against the covenant: the death of the old believer, the sacrifice of the paschal lamb, in rites repeated again and again, week after week, life after life, from now until the end of time. For fifteen years, I thought about these things and struggled to explain them to people who came to the church and were shocked by the imagery and the theology behind it. Ultimately, I concluded their impressions were correct: this is some messed-up theology.

Which is why, when I want table fellowship, I sit down with people I love for an actual, rather than symbolic, meal. No human flesh is consumed (whether we should be eating any flesh at all is a topic for another essay), and if we partake of the fruit of the vine, it is just that: wine, not blood. We are grateful for the produce of the earth, which sustains our bodies, and the presence in our lives of each other, which sustains our spirits; and in this gratitude, we may find our hearts warming to the source of all these things, that which brought this beautiful world into being.
Labels: atonement baptism communion sacrament
Location: Portland, OR 97229, USA