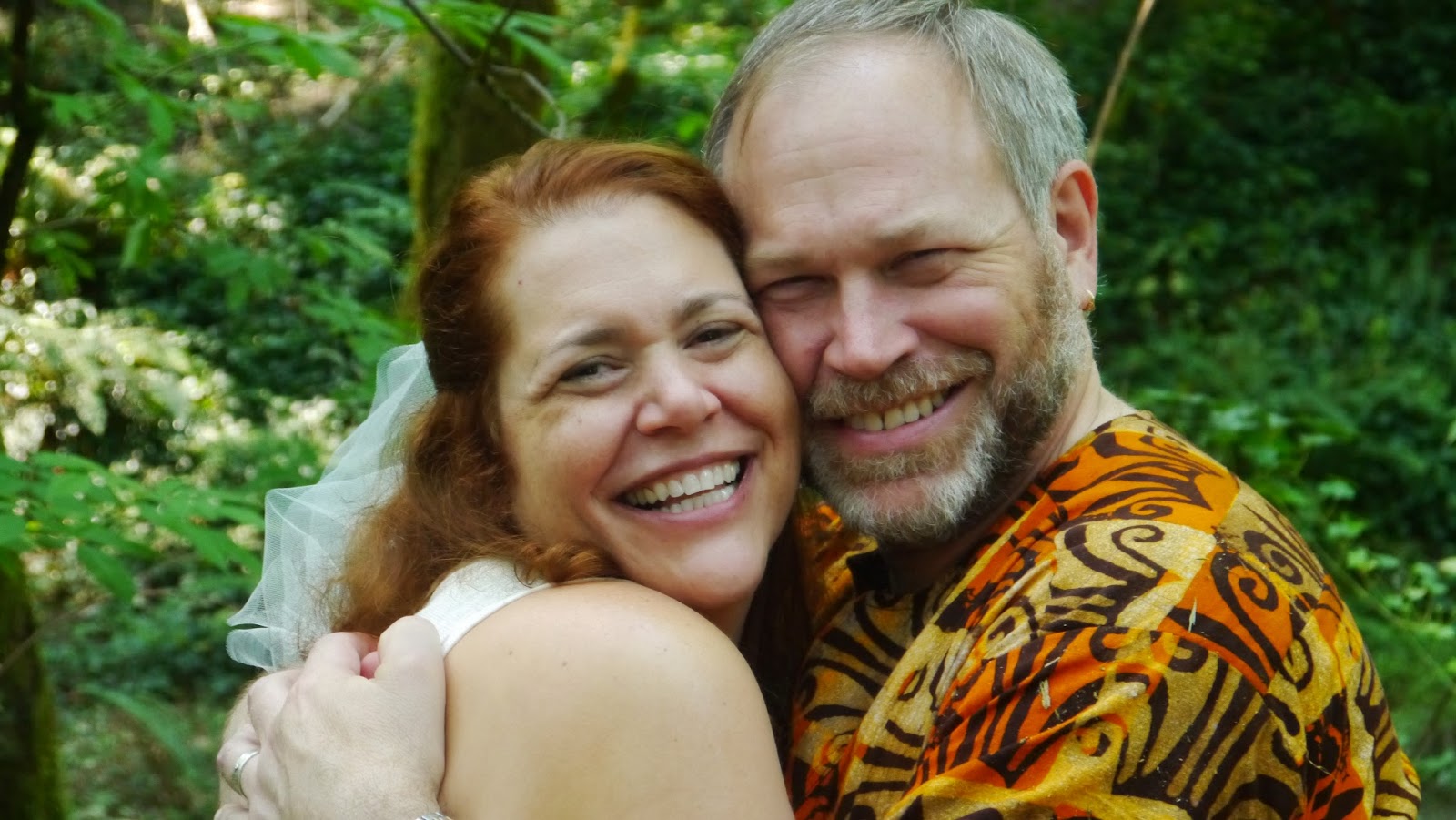 The first thing you need to know about mountain marriage is that we made it up.

We were climbing Dog Mountain, talking as we climbed about a big step we were about to take: after a year and a half of me living in Amy's apartment, we were going to rent a house together, putting both our names on the rent and utilities. Our relationship had been growing deeper and richer, and now we felt ready. In real terms, the change was just of address; symbolically, though, this was a paradigm shift, from me living with Amy to Amy and me living together.

We were heading up the shorter, but far more challenging, trail to the top, battling a ridiculously steep grade. Hiking, particularly mountain climbing, had served as a metaphor for our relationship from our second date, when we took our first hike on Leif Erickson Drive. The hardest climbs had the greatest rewards: the view from the top was always rewarding, but even more was the sense of conquering our bodies' limitations, pushing ourselves further than perhaps we should, and encouraging each other through the moments when we most wanted to give up. Climbing together, we had summited more mountains in three years than I had in my entire life before Amy--who prior to meeting me had never laced up a pair of hiking boots.

Coming around one of the first switchbacks, Amy announced that, when we got to the top, we should be mountain married. We would make promises to each other sealing our decision to officially live together. There would be no legal dimension to this status beyond that which already existed in having both our signatures on the lease, but this still constituted a major step for us: committing our lives to each other as we had not before, however much we might be devoted to each other.

All the way to the top, I thought about what I would say. Amy did the same. Miles of groaning and grunting later, we stood on the summit with the Columbia River Gorge at our feet, and promised to be with each other through adventure and boredom, joy and sadness, to love and support each other in all things. We sealed our vows with a kiss, asked another hiker to take our picture, and it was done. I was Amy's mountain husband, and she was my mountain wife.

Except that's not really what we called each other out in public, because it took too much explaining. For the rest of the world, with few exceptions, we were still "partners" (a term that caused a number of coworkers to assume I was gay) or "boyfriend-girlfriend" (terms that always felt far too superficial and immature). This despite the fact that domestic partnership is rapidly overtaking marriage as the preferred relationship of consenting adults.

A year into this "mountain marriage," we found ourselves attending two weddings. One was a surprise, billed as a house-warming; the other was a more traditional affair, though it was held in Forest Park. As hardened and cynical as we both were to the idea of marriage--we'd been through some rough times with the institution, and had weathered some extremely difficult divorces--we found ourselves moved by the experiences. In the months since then, we have found ourselves coming back to the idea more and more, until finally, sometime during the winter, we decided to really get married in front of witnesses, with vows and rings. We didn't want it to be a huge, catered affair: rather, we wanted to climb a mountain with a few friends and family members and, at the summit, put the seal of matrimony on our relationship. There would still be no legal papers signed--for many reasons, that's just not going to happen--but henceforth, we would call each other husband and wife, and our commitment to each other would formally be until death parts us.

We made our plans, set a date, decided who would preside, invited people--and had to make changes almost immediately. We had hoped to stage the ceremony on Dog Mountain, but Amy's skiing injury in April took that out of the picture. Perhaps Angel's Rest? No, still too difficult. Then one day we were hiking on the Leif Erickson Drive--location of our first "mountain" date, even though it's far from summity--and we came across an abandoned homesite that was the perfect setting.

The date was August 2. As it approached, another commitment loomed: our landlord had decided to sell our house. We were given the first option to make an offer, and after wrestling with the decision, we decided to take the plunge; and thus our legally unofficial marriage will be sealed with one of the most significant financial commitments a couple can make. Working that out has, at times, dwarfed the work we've been doing to make the wedding happen, but still it moved forward. We had an officiant: Scott Simon, fellow improviser, Voicebox entrepreneur, and MC extraordinaire, as well as ComedySportz de facto rabbi. We had the location. We had rings, custom-made for us by a jewelry artisan we met at the Saturday Market. We had a guest list, though it shrank in the days before the ceremony to just three of our four kids, Scott, and John Schwiebert, my good friend, mentor, and pastor from my days in the Metanoia Peace Community. On the morning of the ceremony, John surprised us by bringing along his life partner, Pat, and their friend Bruce.

Yesterday, the nine of us drove to the trailhead and began our descent. It was an easy hike, all of it downhill. We arrived at the location, and before I could catch my breath, Scott launched into the ceremony. He said some wonderful words--if he ever wants to give up being a successful business owner, he's got a great future as a poorly paid cleric--and then the people gathered shared more wonderful words, and finally we said our words to each other, put rings on each other's fingers, smashed lightbulbs with our feet, opened up a champagne bottle, and were and are married.

The words said about and by us are a blur to me, though I made a video for posterity. I know I talked about the joy Amy brought to my life (summarized by the word she always greeted me with in the beginning, "Yay!"), and the way we supported each other all the way up one mountain after another--including the metaphorical mountains that arose in our apartment and home--with the simple word "Adventure!" (Always spoken as if we were Kipling heroes wearing pith helmets, "Adventcha!") And finally I talked about how meaningful it was to me when Amy finally told me she loved me, and how glad I was that she waited until she could say it sincerely. And then I said how much I love her and how happy I am to be spending the rest of my life with her.

Amy talked about what a good person I am, and Sarah and Alex affirmed their welcome of me into the family, but the truest words of all came from Sean, as he acknowledged that he can see how happy I am with Amy, happier than he's ever seen me.

It's true. I look at the ring on my finger, and I feel awe and delight that I get to spend my golden years with this amazing woman who is the most mature grownup I've ever known and yet has held onto her child's heart of play and wonder. I look at her, Amy, my partner, my lover, my wife, and feel my heart swelling so that my chest cannot contain it. I am blessed, I am thrilled, I am in love, I am loved. I have "just married" painted on my car window--a parting gift from rabbi Scott--and I feel no embarrassment over it, because I want the world to know how privileged I am to be with this beautiful, hilarious, trustworthy, deeply ethical woman.

I don't know what adventures my future holds, what mountains I may or may not be able to climb, what obstacles I may face, what grief may wash over me. I don't know where I'm going. But I do know who's going with me.
Dog Mountain marriage mountain marriage
Location: Northwest Leif Erikson Drive, Portland, OR, USA